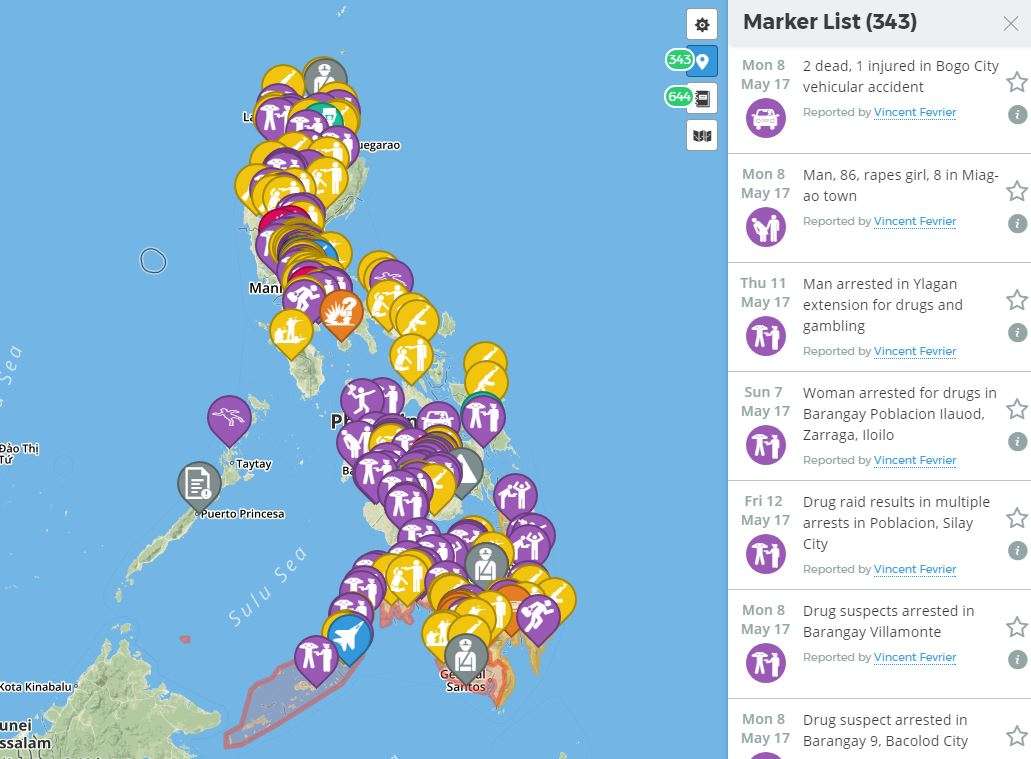 Philippines Incidents: 1st May – 15th May 2017.
The situation in the Philippines for the first month of May has seen the continuation of President Duterteâs War on Drugs with countless arrests and drug related shootings, either between police or drug suspects, or frequently the summary execution of drug users by vigilantes. Many of these arrests have been in the Manila Metro Area, with Bulacan, Cebu, and Negros Occidental recording high numbers as well. Besides the War on Drugs, the Filipino Army has been involved in several skirmishes with the New Peopleâs Army (NPA), the Bangsamoro Islamic Freedom Fighters (BIFF), and the Abu Sayyaf Group (ASG). Conflict with the BIFF has primarily been focused in Maguindanao and North Cotabato, and the first half of this month has seen the army targeted with multiple improvised explosive devices and in skirmishes, which has required a response with artillery fire, air support, and a strong security presence. Regarding the ASG, the Army is still running security operations on the island of Bohol to capture the remains ASG militants which had infiltrated the island last month. In their stronghold of Basilan, the Army has engaged the group in several skirmishes and used FA-50 fighter jets to destroy their bases in the thick cover of the Basilan jungles. Finally, the government and the NPA are in the middle of peace talks and have agreed to a ceasefire, but no terms have been set and therefore sporadic violence continues. Skirmishes between the two have been recorded across the island of Mindanao, in Quezon, and in the northern provinces of the Philippines. The U.S. has issued a travel warning for the island of Palawan, and the British Embassy issued a travel warning for the southern area of Cebu, warning of possible attacks by the ASG. 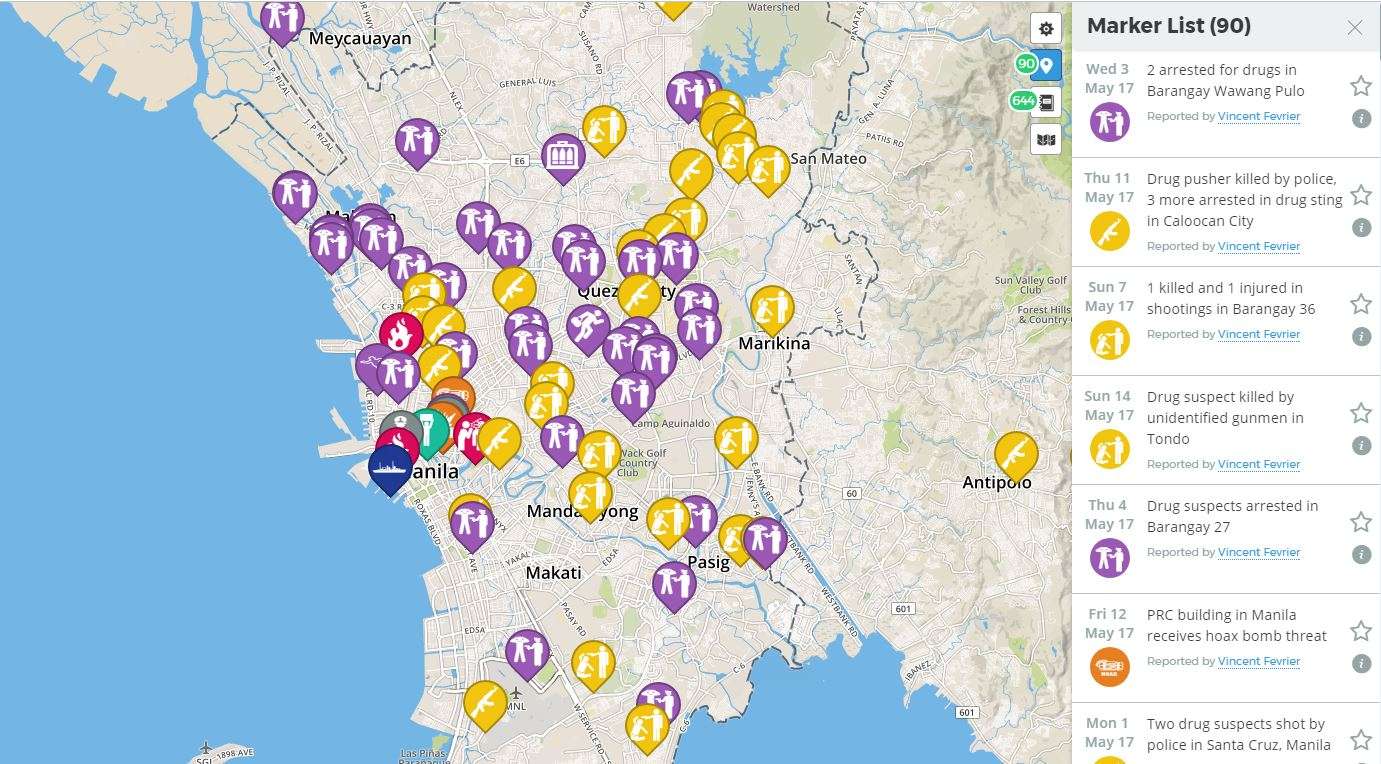 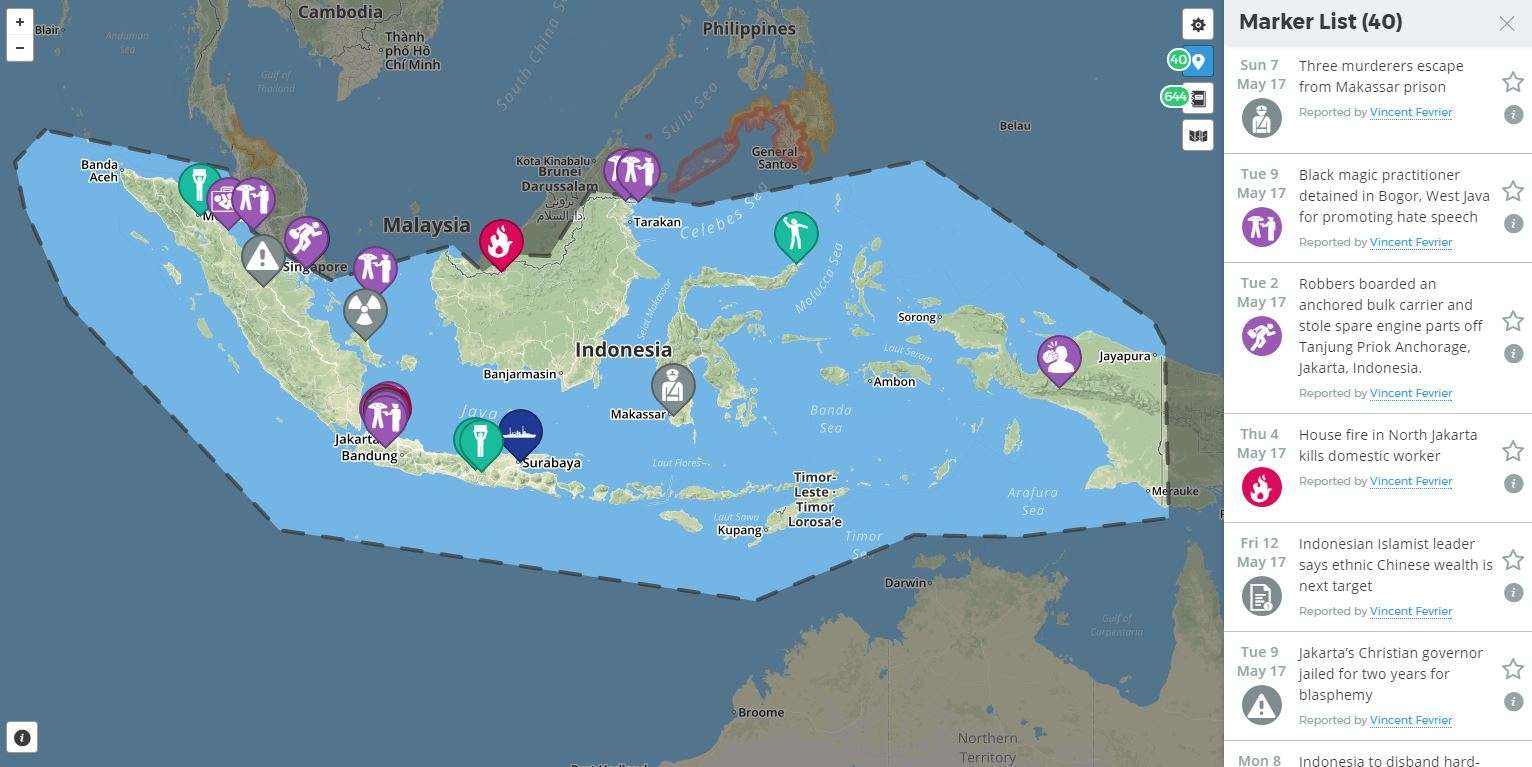 Indonesia Incidents: 1st May – 15th May 2017.
Indonesia continues to battle human and drug trafficking on the island, with police announcing that they had been successful in stopping Rp20 billion worth of drugs through the Soekarno-Hatta International Airport. Other significant security events in the first half of May have been the jailbreak of over 200 inmates from the prison in Pekanbaru City. Overcrowding and lack of security personnel have been given as reasons for the jailbreak, and while the majority have been recaptured, there are still some inmates free. What has been of significance in May has been the jailing of ex-Jakarta Governor Ahok for two years on the charge of blasphemy. This sentencing has showcased the power that conservative Islamists have gained in the country, particularly as the prosecutors had suggested two yearsâ probation. The leader of the movement that led to the trial of Ahok has made an announcement that the groupâs next target will be Chinese wealth in the country, which he sees as a danger. In the meantime, police have been dealing with ongoing protests both pro- and anti- Ahok.
Malaysia 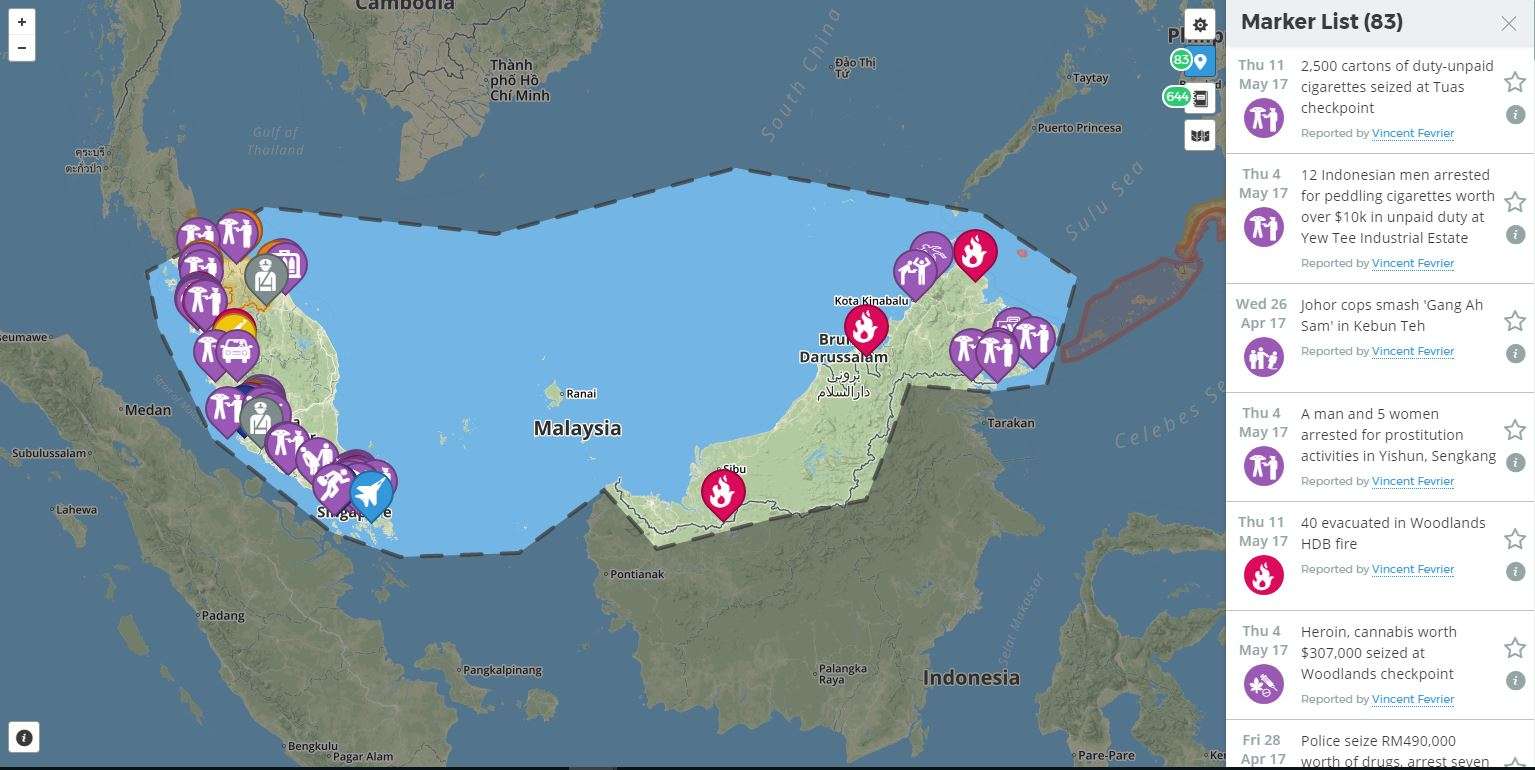 Malaysia Incidents: 1st May – 15th May 2017.
Like Indonesia, Malaysia has been dealing with what seems to be common security issues in the region regarding drug, human, and animal trafficking. Significant events include the dismantling of two drug labs in Penang, with leading to the seizure of RM6.8 million in drugs, the biggest haul of the year for the province. Police have also stopped a human trafficking syndicate in Kunak, Sabah, as well as making multiple arrests of illegal migrants in Johor Baru, mostly Indonesians. Porous borders allow for such trafficking to take place, and is cause for concern. One such concern is the movement of terrorists through the borders. A report in the first week of May by Malaysian authorities announced that the leader of an Islamic State terror cell had escaped Malaysia into southern Thailand. The report also mentioned that this cell had been smuggling weapons from southern Thailand into Malaysia for attacks at home and abroad. This shows the threat that terrorism poses to the country, and the greater region.
Thailand 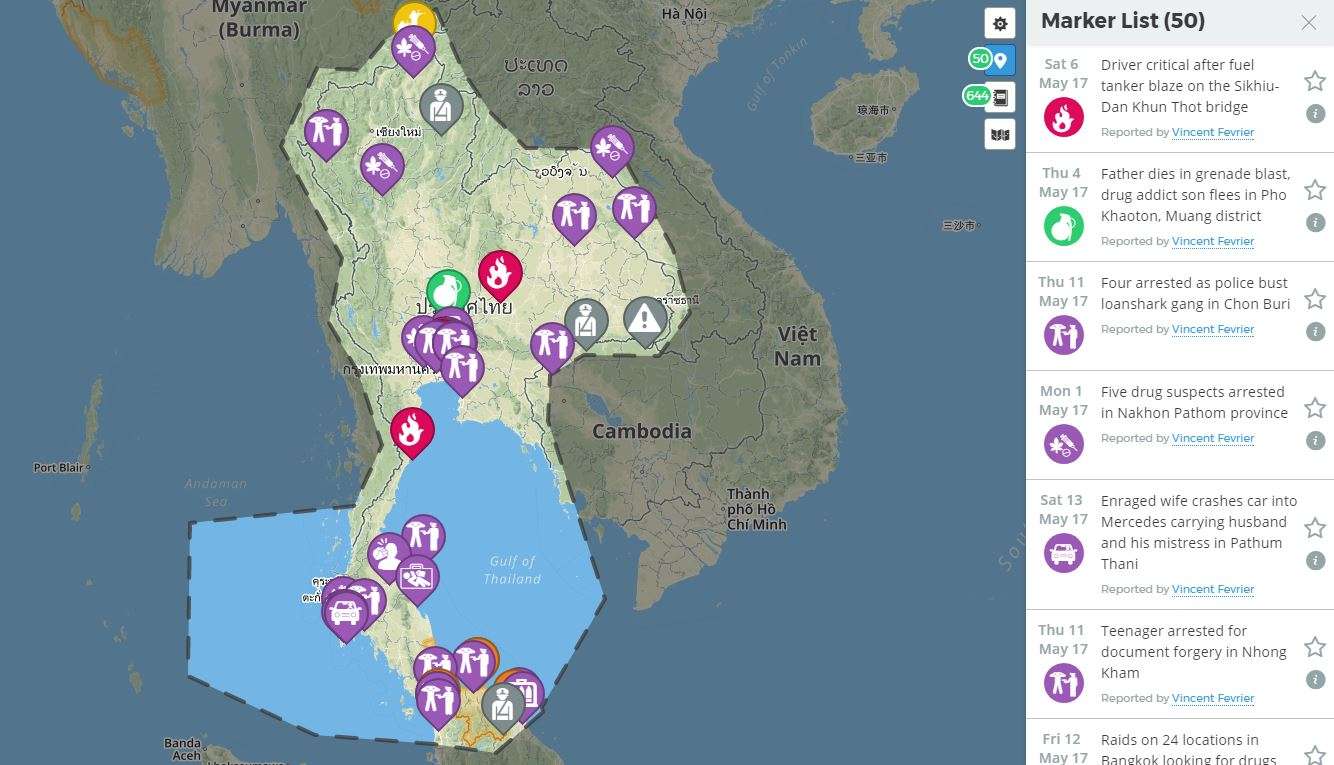 Thailand Incidents: 1st May – 15th May 2017.
May has seen several incidents reported regarding drug trafficking. Located centrally between Myanmar, Laos, and Cambodia, the country has served as a waypoint for illicit goods towards Malaysia and Indonesia. The most significant drug related incident recorded in May so far has been a skirmish between drug traffickers and para-military rangers in North of Chiang Rai leading to the death of 9 drug suspects and the seizure of 700,000 Yaba pills (a mixture of methamphetamine and caffeine). As for the insurgency in the south of the country in the region of Patani, bombings continue, with a border patrol officer being injured by an IED near the Sungai Kolok River, and over 50 people hurt in a car bomb outside a shopping center in Pattani. The insurgency coupled with weak governance can be seen a danger for the country and northern Malaysia, with which it shares a border.
South China Sea
The territorial conflict in the South China Sea has continued, but with less intensity than earlier in the year. Reports have continued to flow that China is continuing to build on the man-made islands it has built, and has continued to militarize the region. While President Duterte of the Philippines will start bilateral talks with China this week to ease tensions and instead resolve it through economics, the Philippines still sent troops and supplies to Pag-asa island in preparation for construction work which will include a dock and lengthening the airstrip. China also met with Vietnam earlier in the month to hold talks regarding the territorial claims. Nonetheless, China had sent in late-April early-May its largest Coast Guard Cutter into the South China Sea on a patrolling mission. That deployment has now finished.
Back to Reports & Resources