During this reporting period the London Bridge attack dominated security events within Europe. Please refer to previous reporting that covers that incident in more granular detail. 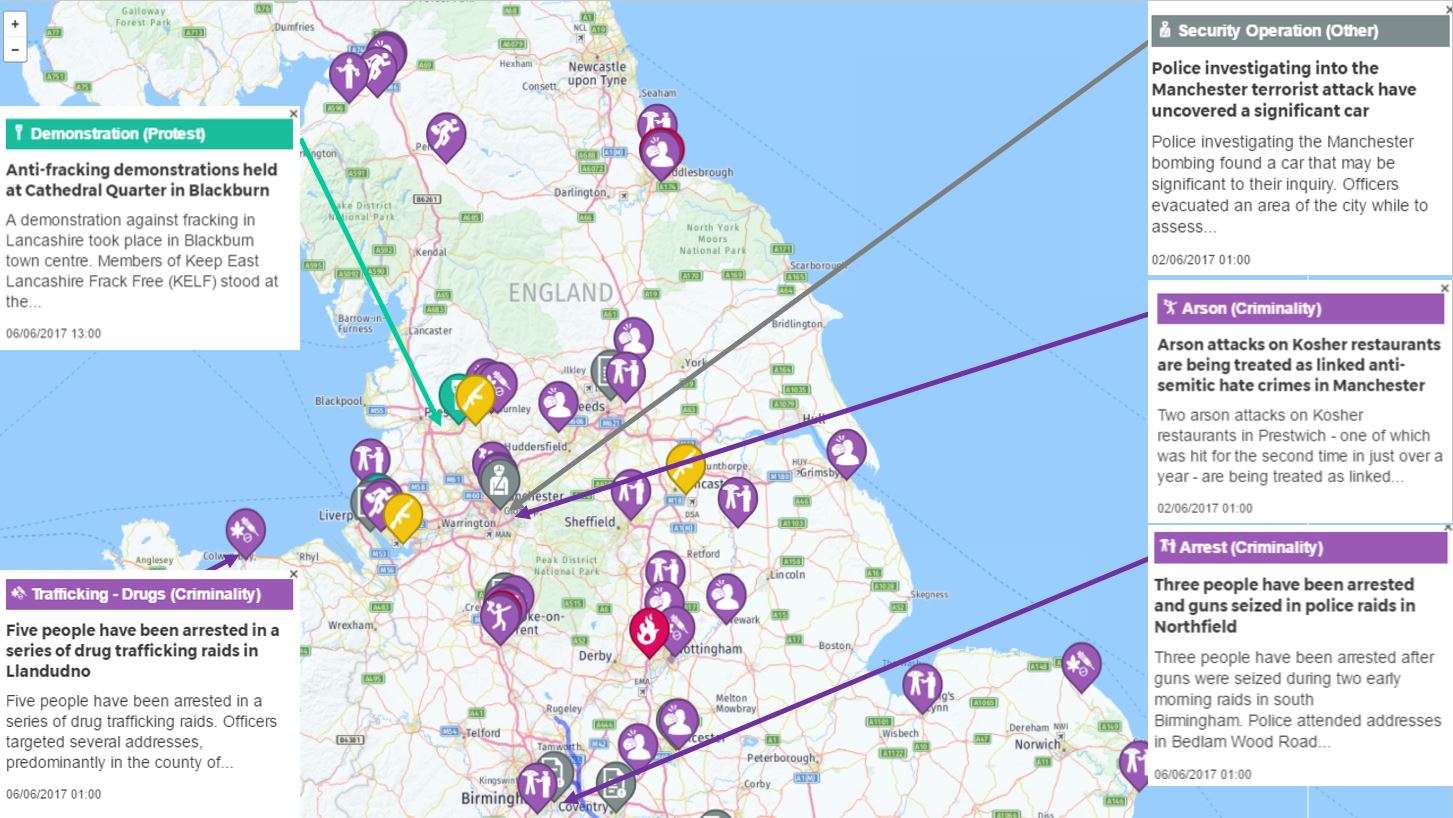 Northern England: Click on above image to expand.
Northern England, United Kingdom
Police arrest operations carried on in the wake of the Manchester suicide attack with police finding a vehicle on 2 June related to the suspect involved in the attack. Police carried out raids in Birmingham on 6 June in relation to an incident on Bristol Road in May. Two separate arson attacks on Kosher businesses on 2 June are being investigated as a hate crime by police in Manchester. Drug trafficking arrests were also made by police in North Wales on 6 June and an anti-Fracking demonstration was also held the same day in Blackburn. 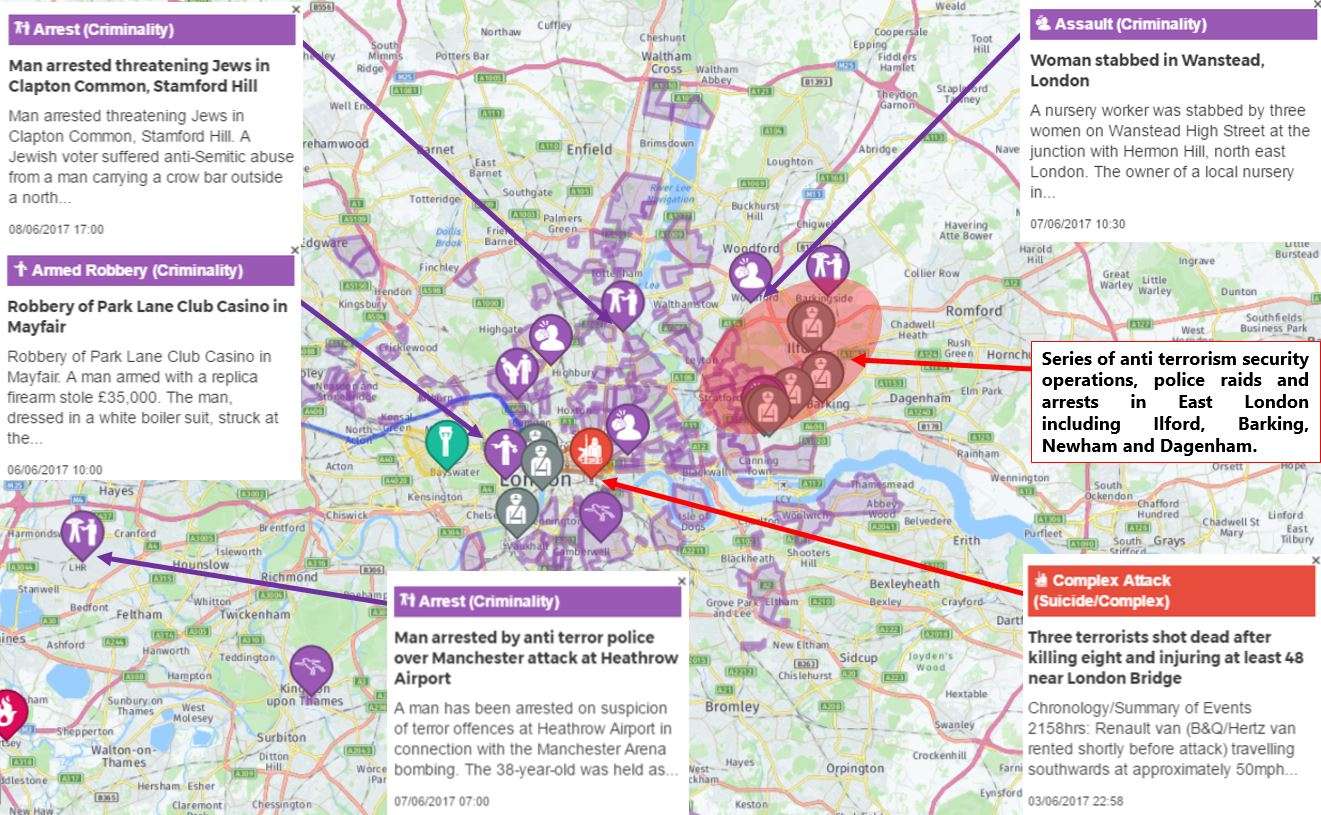 London, United Kingdom: Click on above image to expand.
London, United Kingdom
A series of police arrests and raids were carried out over the reporting period in response to the London Bridge attack on 3 June. A man was arrested on 7 June at London Heathrow Airport in connection to the Manchester attack. Two significant hate crimes were reported, the stabbing of a woman on 7 June by three girls allegedly shouting âAllahâ in Wanstead and a man arrested by police threatening Jewish voters with an Iron bar in Stamford Hill on 8 June. The robbery of a Mayfair Casino was also reported on 6 June. 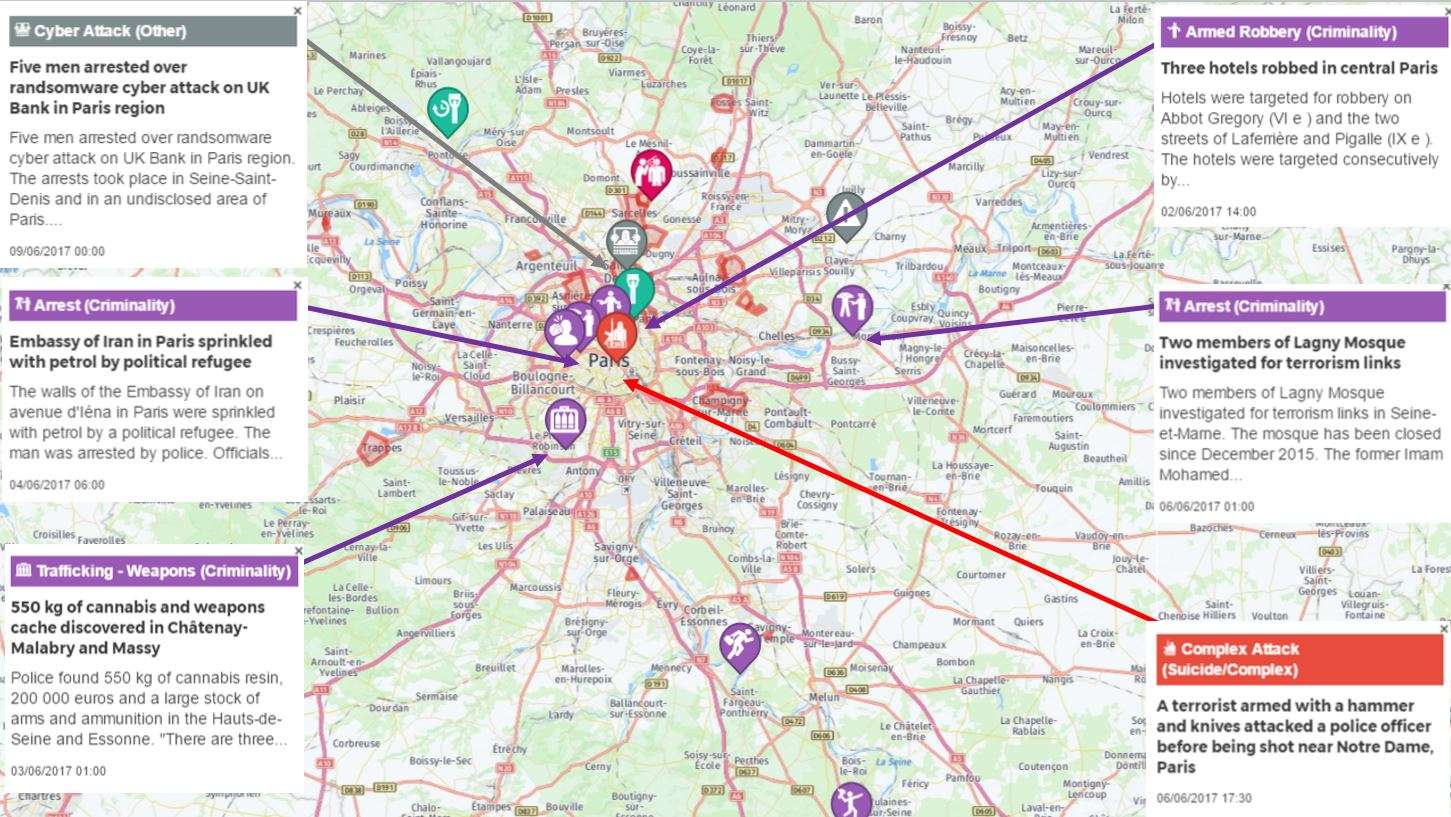 Paris, France: Click on above image to expand.
Paris, France
The most significant incident this reporting period was a terror attack by Notre Dame Cathedral on 6 June which is explained in more detail in a previous report. Anti terror police arrested two previous members of Lagny Mosque over extremist links on 6 June. A political dissident was arrested outside the Iranian Embassy trying to sprinkle petrol on its walls on 4 June. Five men were arrested in northern Paris over a cyber attack on an unnamed bank in the UK on 9 June. Three hotels were also robbed in central Paris on 2 June. A large drug seizure along with a cache of weapons was also uncovered by police in south west Paris on 3 June. 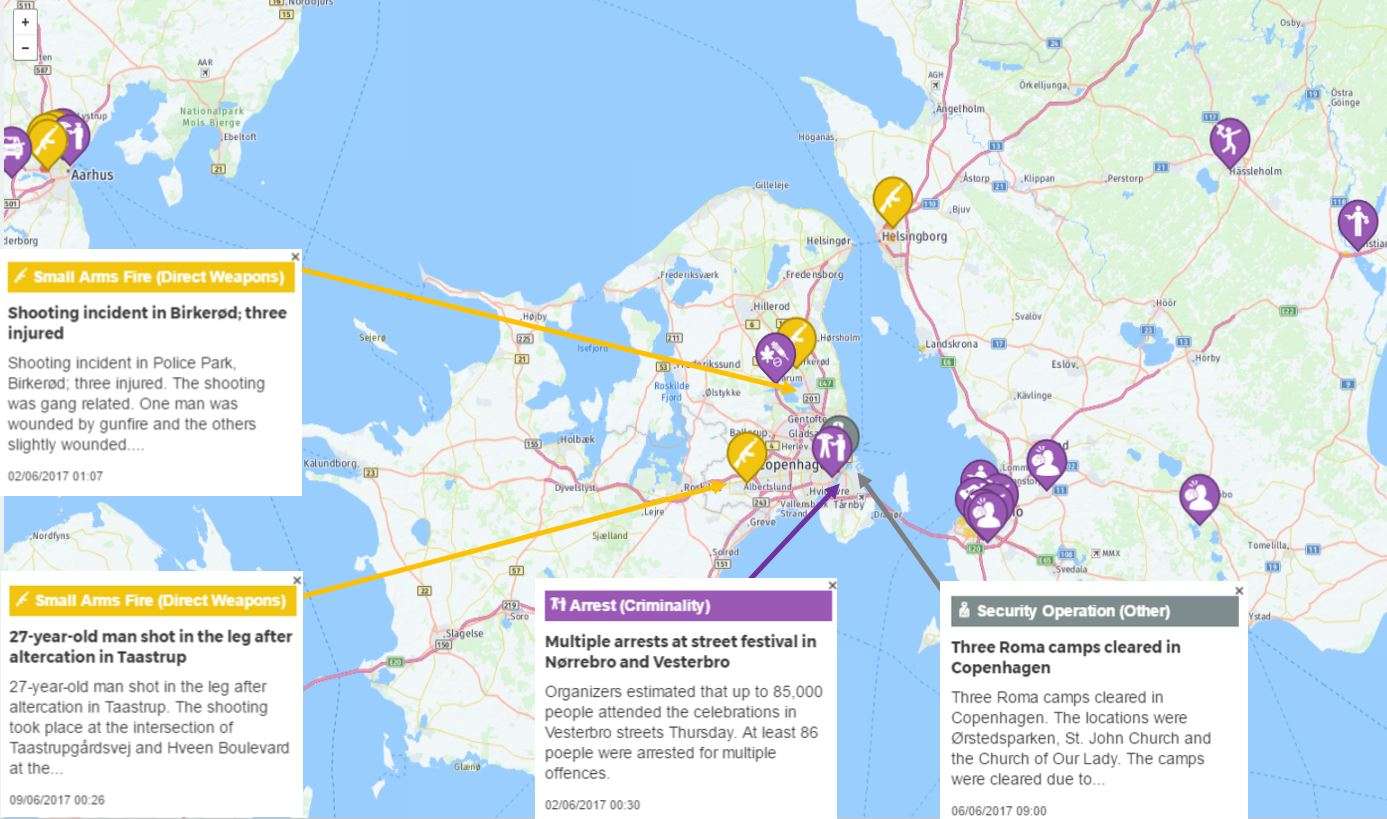 Copenhagen, Denmark Click on above image to expand.
Copenhagen, Denmark
Shooting incidents were reported in Birkerod on 2 June and in Taastrup on 9 June. Denmark has witnessed a spike in shooting incidents in the last months due to turf wars between organised crime gangs. Further details are available to subscribers. Multiple arrests were made at a Copenhagen Street Festival on 2 June and police cleared three Roma camps across central Copenhagen on 6 June after recent problems with local homeless people. 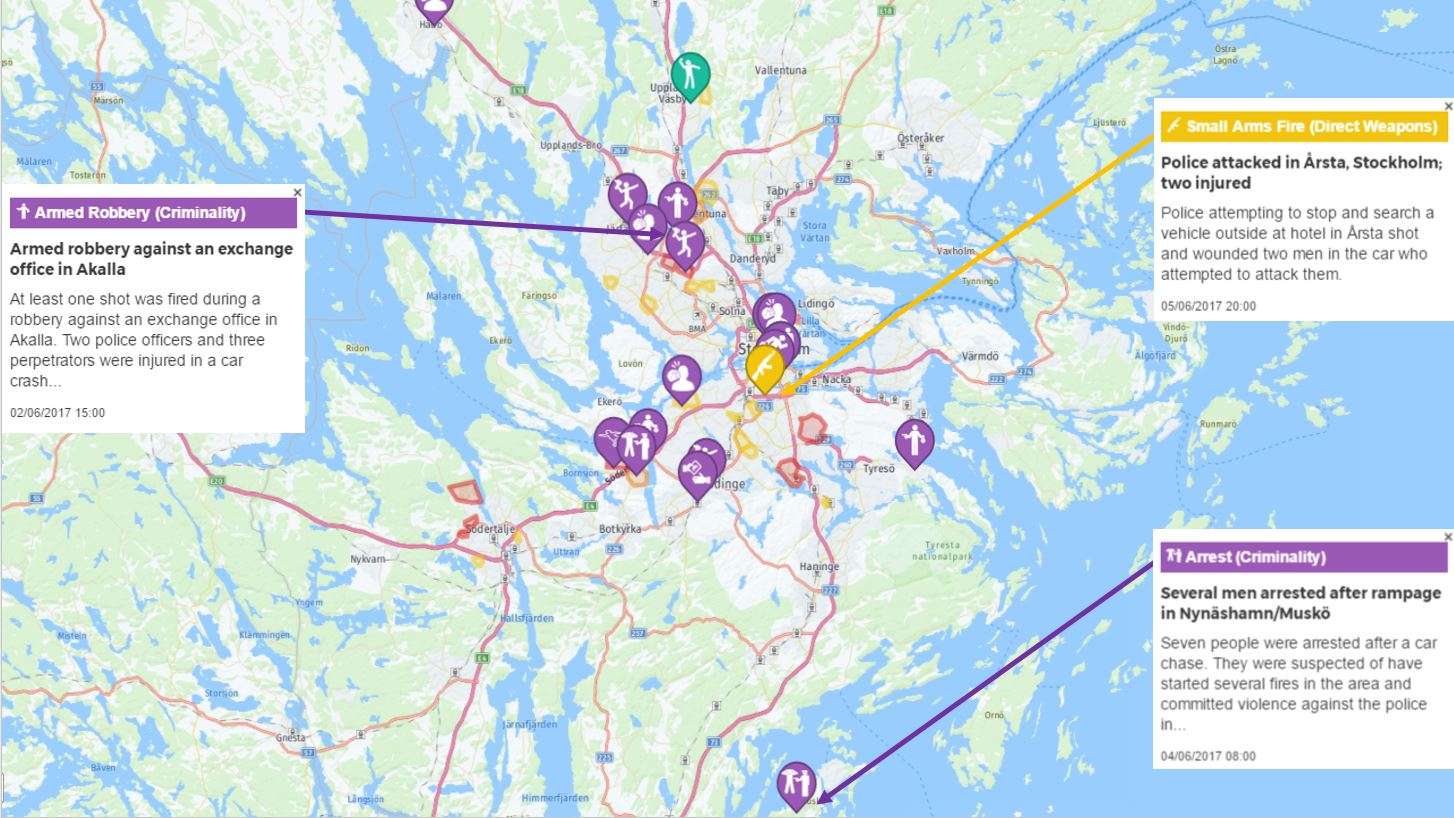 Stockholm, Sweden: Click on above image to expand.
Stockholm, Sweden
An armed robbery was reported in Akella on 2 June and several men were arrested after going on a lawless rampage south of Stockholm on 4 June. The men committed several arson attacks and assaulted police officers before being apprehended after a car chase. Police were forced to shoot and injure two men who attempted to assault officers after a routine vehicle search in Arsta on 5 June. Several arson attacks were reported in the suburbs as well as armed robberies. Full details on each and all incidents are available to subscribers.
Back to Reports & Resources