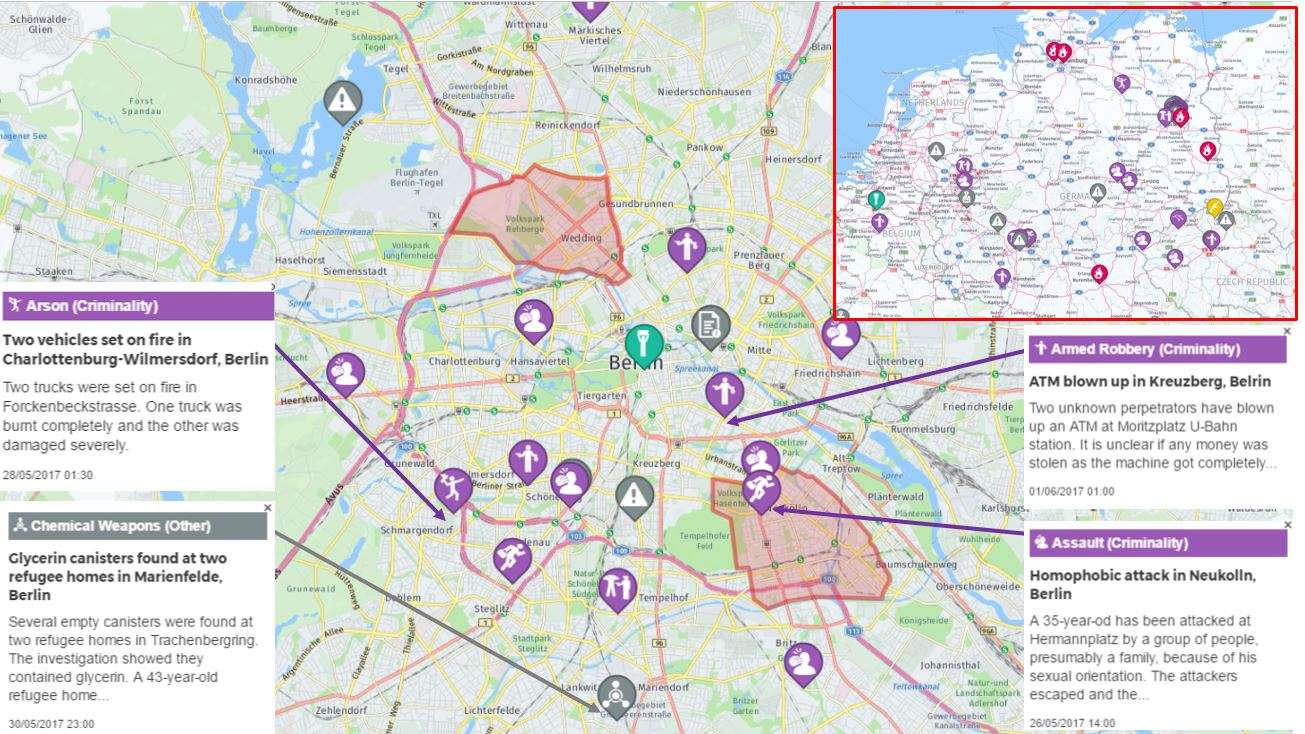 Berlin, Germany: Click on above image to expand.
Berlin, Germany
An ATM was targeted with explosives in Kreuzberg on 1 June. This is a common tactic used in the city and Intelligence Fusion has logged over 20 such similar attacks in the last 12 months alone. A homophobic attack occurred in Neukolln on 26 June. Berlin has seen an increase in reporting of homophobic hate crimes in recent months. Glycerine canisters were uncovered by police in two refugee homes in Marienfelde on 30 May. A series of arson attacks on cars and buildings occurred around the capital with the most notable incident being the torching of two trucks in Charlottenberg- Wilmersdorf on 28 May. 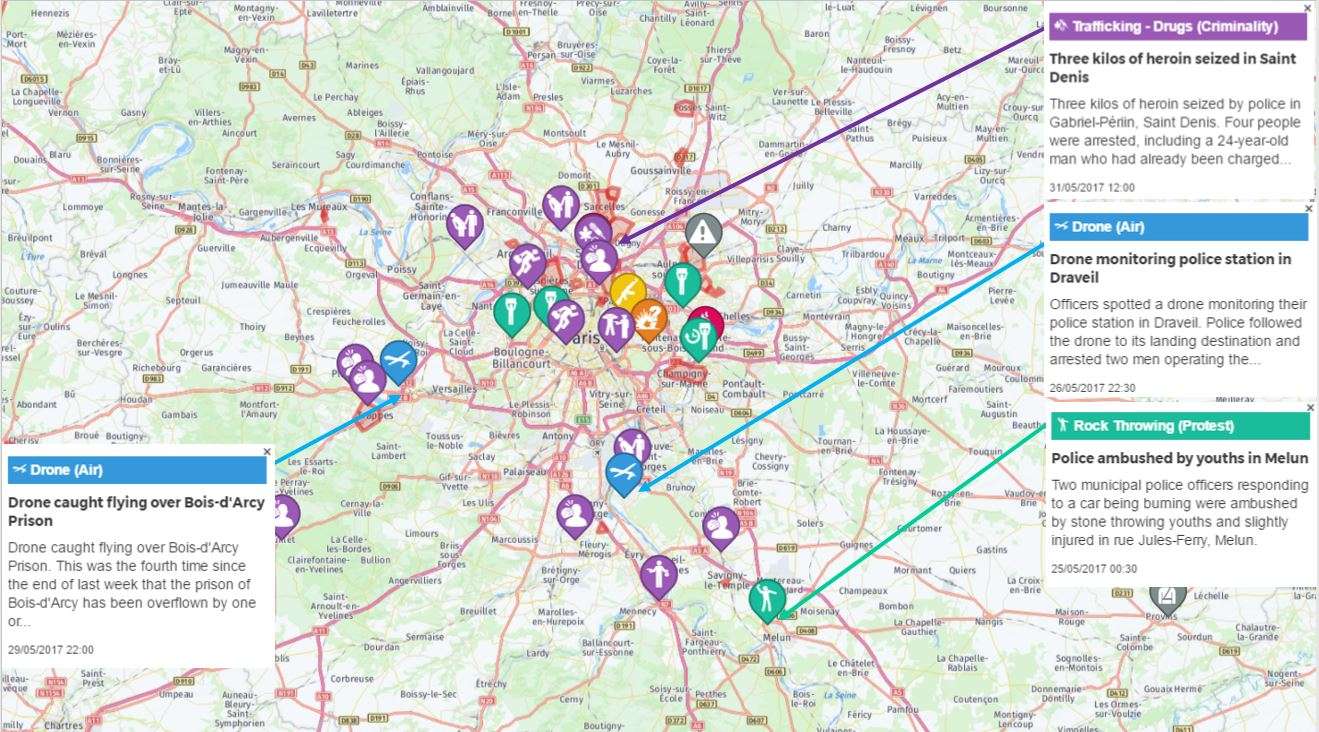 Paris, France: Click on above image to expand.
Paris, France
Two drone incidents were reported in the Paris region during this reporting period. A drone conducted an overflight of a prison in Bois-Dâarcy on 29 May and another drone was spotted by police officers monitoring a police station in Draveil on 26 May. The owners were arrested. Several drone incidents have been recorded in the Paris region over the past few months, full details are available to subscribers. Police officers on patrol were ambushed by stone throwing youths in Melun on 25 May and on 31 May 3 kilos of heroin were seized by police in Saint- Denis. 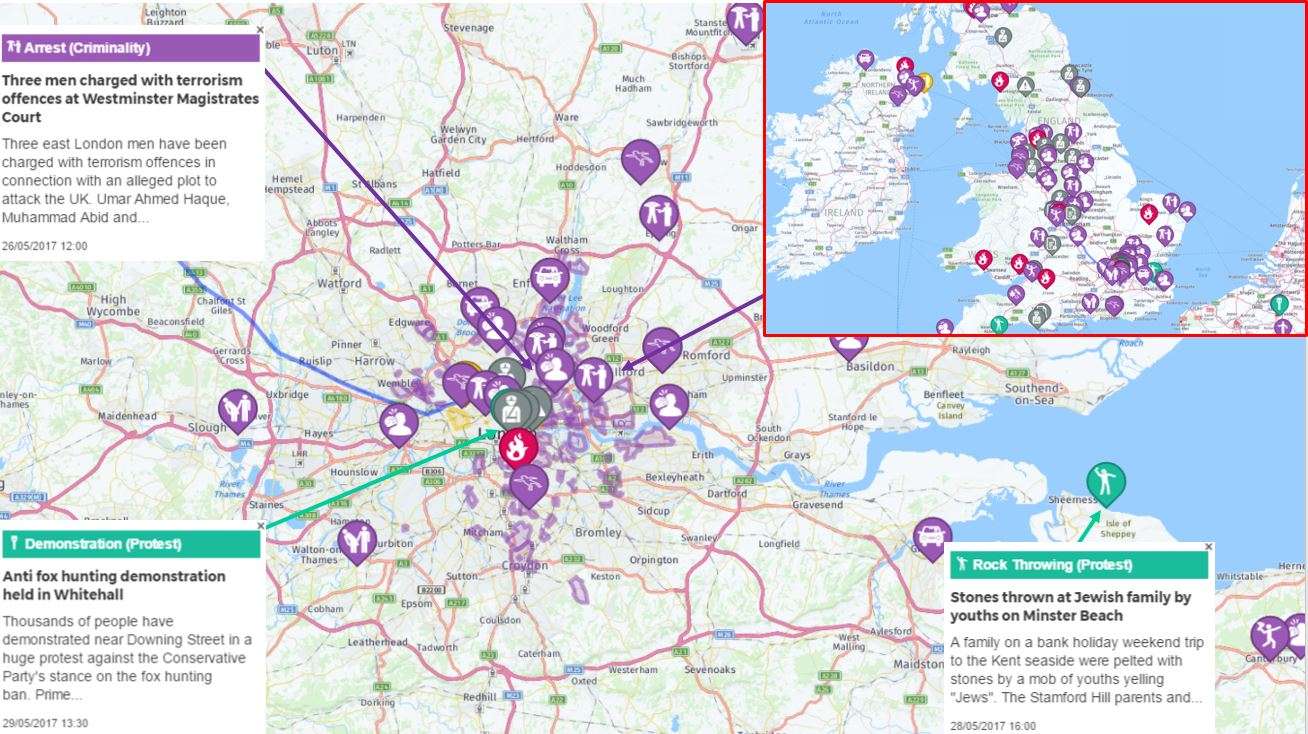 London, United Kingdom: Click on above image to expand.
London, United Kingdom
A series of security alerts occurred in central London in the wake of the previous Manchester attack and three men were charged with terrorism offences at Westminster Magistrates Court on 26 May. A Jewish family were attacked with stones by youths on the Isle of Sheppey whilst on the beach on 28 May. A police investigation has been launched. A large anti -fox hunting protest occurred in Whitehall on 29 May.

Spain: Click on above image to expand.
Spain
A series of strikes and protests were reported in Madrid with the most prominent being a taxi driver march against competitors being called on 30 May. A gang which exploited illegal immigrants for labour was broken up in Valencia in a large scale operation on 25 May. Full details on all these incidents are available to Intelligence Fusion subscribers.
Back to Reports & Resources