At 0500 7 February 2018, forces loyal to Syria’s President Assad began an advance across the Euphrates river, east of the city of Deir Ezzor, into a town called Khursham. They were targeting the gas fields and gas refining plants north of the town. Defending these facilities were the Syrian Democratic Forces (SDF), a mainly Kurdish militia which is backed by the US. There were American advisers embedded with the SDF, and these advisers were backed by American air power.

What were believed to be soldiers of Assad’s Syrian Arab Army (SAA), or loyal irregular auxiliaries attacked an SDF base with armour, artillery and infantry. The American response was ferocious. Attack helicopters, AC-130 gunships and fighter bombers pulverised the attackers. Another demonstration of the US Air Force’s (USAF) almost omnipotent ability to control a battlefield. Initially, none of this was extraordinary: the US has a history of using its air-power and a small number of advisers to stiffen local forces, as they did, for example, in Afghanistan in 2001-2002.

Within days, reports emerged that the SDF and the USAF had not been fighting only the SAA, or only Assad-loyal militias. A post on VKontake, Russia’s Facebook equivalent, suggested over 200 Russians had fought in the battle, and scores had been killed. Comrades of those killed in the battle contacted the BBC, revealing they worked for Wagner, a private military company closely tied to the Kremlin. In short, Russian citizens had attacked bases containing US servicemen, and then US pilots had killed Russians in droves. This shows the complexity and confusion of the Syrian theatre, and the danger of escalation had uniformed Americans been killed.

Alleged videos of the attacks emerged. This article will show how we can geolocate the places shown in these videos to find out if they do show what they claim to show. It should be noted this is not the first article to geolocate locations in these videos, but was written independent of other geolocation sources and should hopefully show some of the geolocation skills used by Intelligence Fusion.

First we will analyse the video. It shows fighters (possibly Wagner mercenaries, but impossible to be sure) operating an 122mm M1938 howitzer in a courtyard near a two-roomed building with a small wall attached to it. There is a flat area of compacted earth. The courtyard appears to be enclosed on at least two sides by low walls, though this isn’t definitively showed by the video. 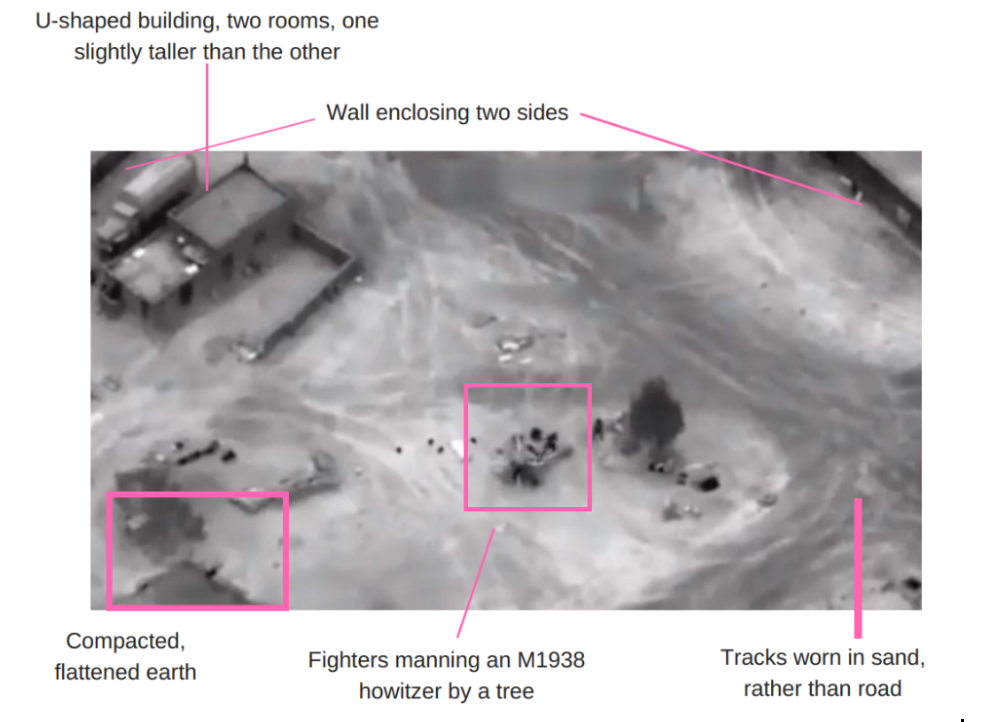 Identifying these individual aspects of the video will help us find the firing position.

Deir Ezzor, the area where the attack occurred, is a big place. Using this image we could scour satellite imagery of the area and hope to get lucky. However there are two other actions we can take to narrow down the search area, and reduce the potential places the video could show.

We know enough about the pro-Assad force’s plan of attack to narrow down the search area. We know the force crossed the Euphrates into Khursham, attacking towards the gas fields north of the town. Wikimapia users have added two SDF positions to the Wikimapia platform, which allows users to identify geographical features. All this lets us set a narrower search area, though of course this is an assumption, for example the pro-Assad forces could have tried to outflank the SDF forces, placing them east or west, rather than south of the SDF positions. But the assumption will do for now. 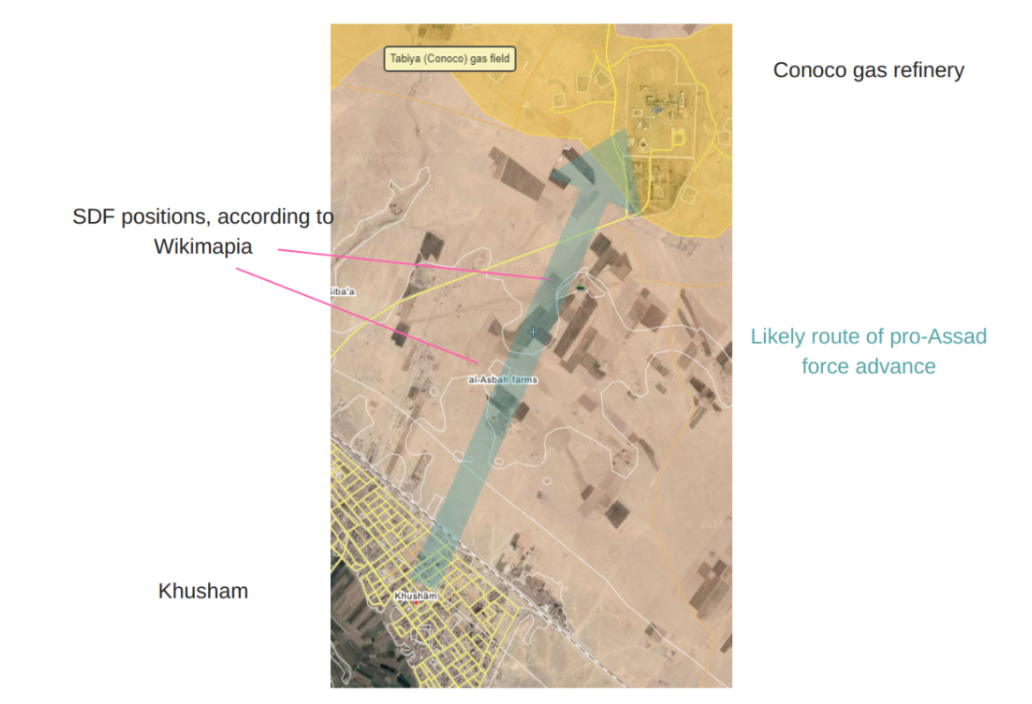 Geolocating images often involves matching shapes in an image (e.g. the rectangular building, the darker square of earth) to satellite imagery. This is made much easier if we can identify the orientation of the image, as we can rotate our satellite sources to the same orientation , which makes it easier to identify similarities. There are ways to do this using shadows and the estimated time at which the image was captured (if the image was captured in the evening and a long shadow is being cast, that shadow will be pointing east as the sun sets in the west), but this is not the case here. The tree casts a clear shadow but one which suggests a midday sun.

However, there is one clue to the orientation of the image: the howitzer. Based on our assumptions above, the soldiers crossed the Euphrates to the south and marched north into Khursham. They are fighting the SDF, to the north. Therefore it is reasonable to assume the howitzer is pointing north. While the barrel is hard to identify, we can clearly see the “rails” of the howitzer, which braces the gun against recoil and allows it to be towed. We can also see the soldiers are clustered on one side of the howitzer, suggesting they are manning it. 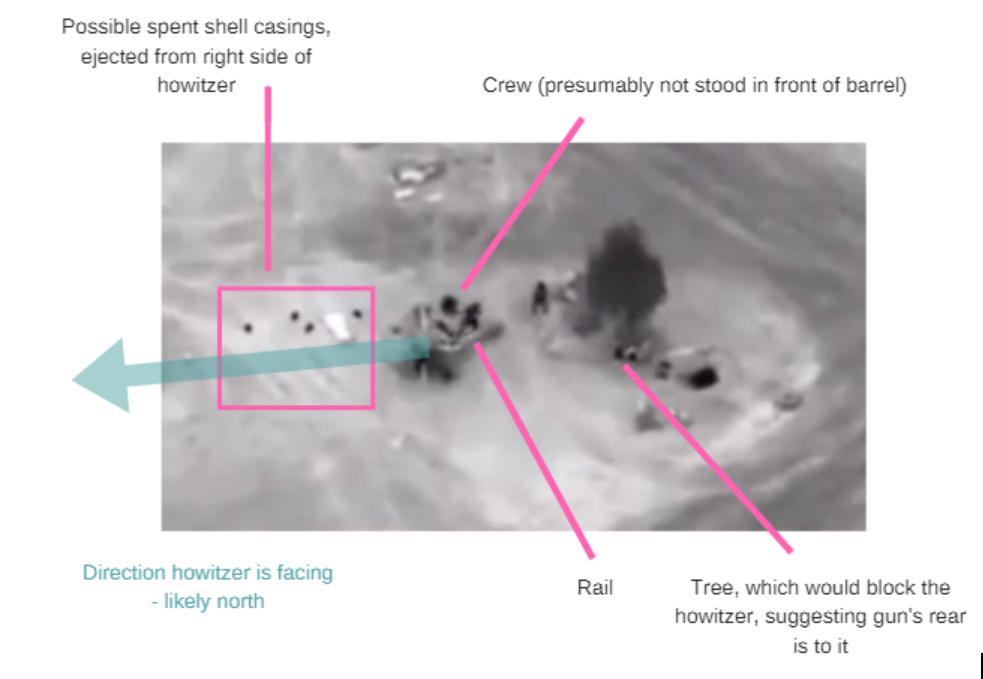 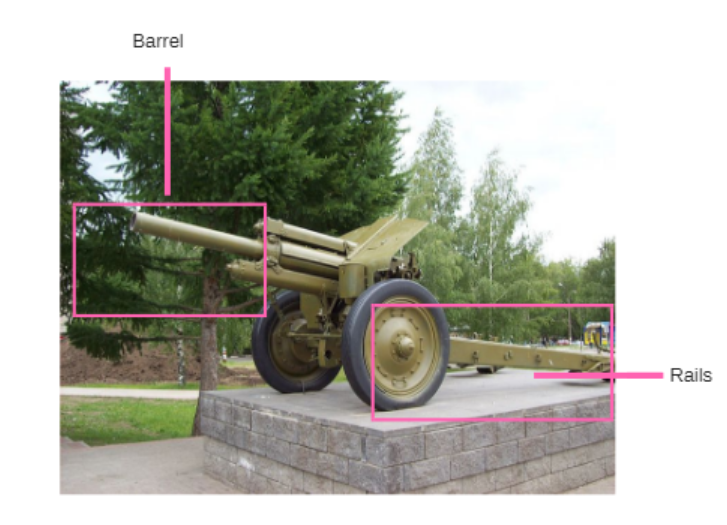 If these two assumptions are correct (that the pro-Assad forces were advancing north, and therefore that their guns are pointing north) we can orient the image, meaning the rectangular building and its little wall are forming a u-shape, rather than n-shape, and that the compacted earth would be further north than the building.

With these clues we can begin our search with greater precision: narrowed down to buildings directly south of the SDF positions and with a clearer idea of the shapes of the structures we are looking for. This part of the process can be very time consuming. 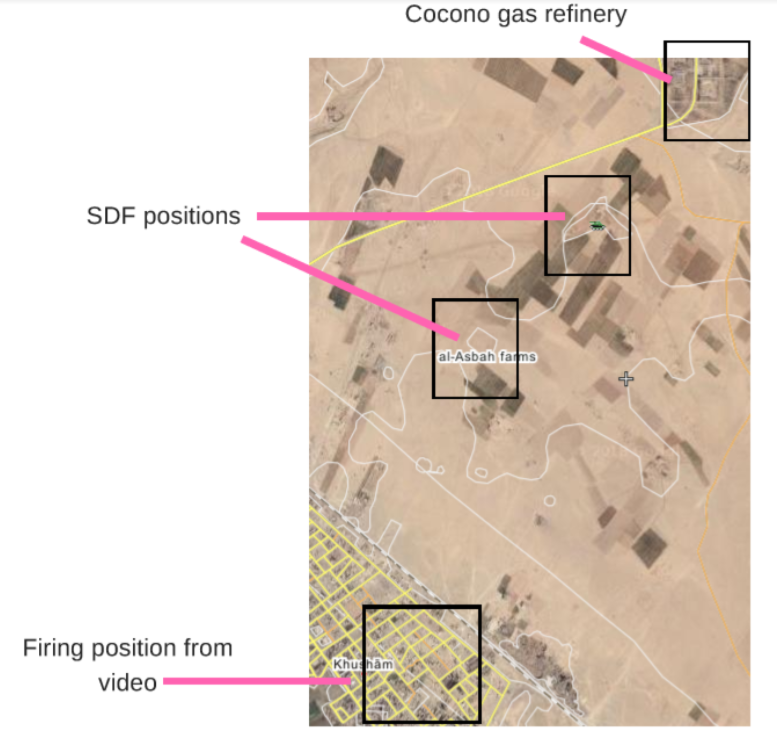 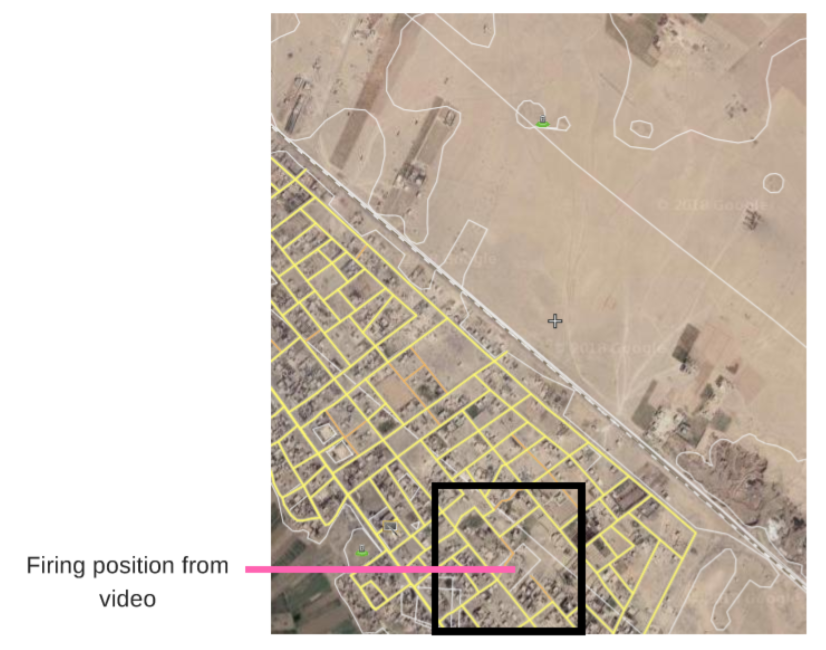 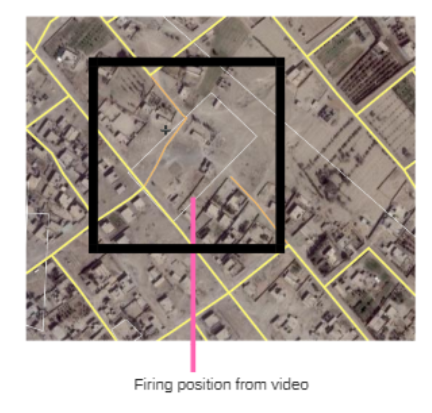 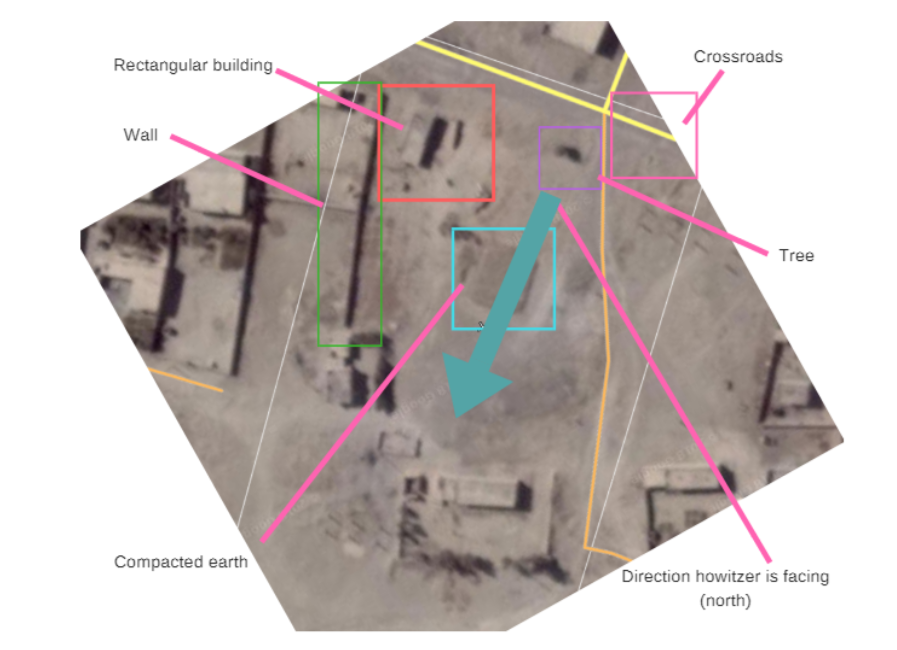 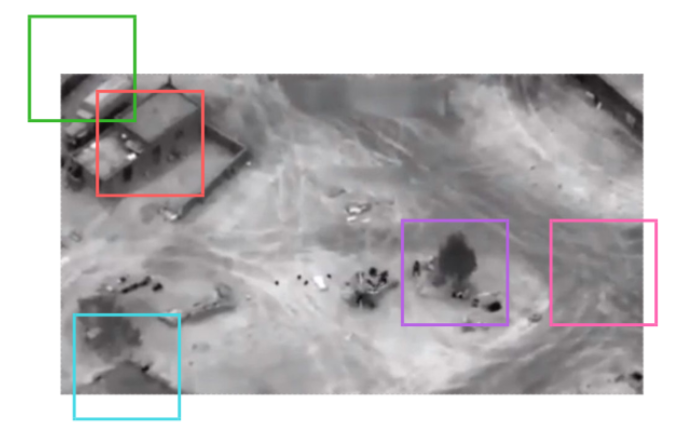 We have now successfully geolocated the courtyard from which the pro-Assad fighters were operating their howitzer. It is indeed in the town of Khursham, near Deir Ezzor. The howitzer is pointed and, judging by the possible spent shell casings, has been firing, northwards towards SDF positions before it was destroyed by an airstrike. This also supports the BBC’s and other reports that the fighting occurred near the town of Khursham: The howitzer would be firing over the heads of infantry and armour advancing on SDF positions, in the open plain between Khursham and the SDF bases. This geolocation shows that the videos claiming to show incidents from this battle are correct.