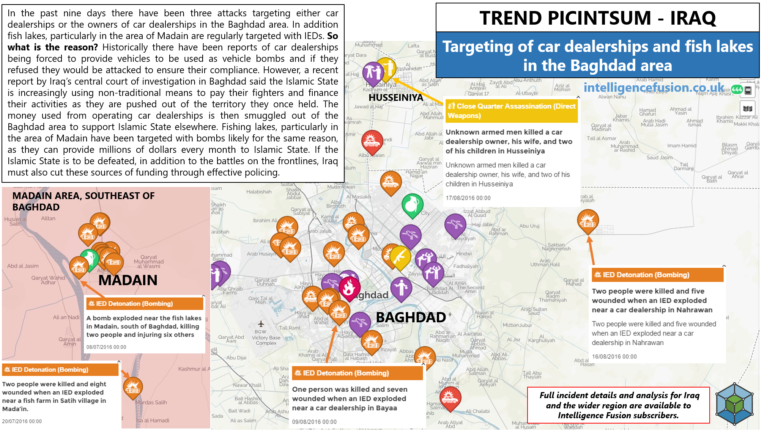 In the past nine days there have been three attacks targeting either car dealerships or the owners of car dealerships in the Baghdad area. In addition fish lakes, particularly in the area of Madain are regularly targeted with IEDs. So what is the reason? Historically there have been reports of car dealerships being forced to provide vehicles to be used as vehicle bombs and if they refused they would be attacked to ensure their compliance. However, a recent report by Iraqâs central court of investigation in Baghdad said the Islamic State is increasingly using non-traditional means to pay their fighters and finance their activities as they are pushed out of the territory they once held. The money used from operating car dealerships is then smuggled out of the Baghdad area to support Islamic State elsewhere. Fishing lakes, particularly in the area of Madain have been targeted with bombs likely for the same reason, as they can provide millions of dollars every month to Islamic State. If the Islamic State is to be defeated, in addition to the battles on the frontlines, Iraq must also cut these sources of funding through effective policing.
Back to Reports & Resources