The Surge of Illegal Mining in Peru

The price of gold significantly increased in the six years between 2006 and 2012, going as high as USD 1,892 for an ounce of the metal. In the last few years, the price of an ounce has fluctuated between USD 1,100 and USD 1,350. The high prices of gold that were reached in the last decade led to an expansion of legal mining projects, but of more consequence has been the surge of illegal small-scale mining operations especially in the Amazon.

Thousands of these mines can be found across Brazil, Bolivia, Colombia, Peru, Ecuador and Venezuela, and their impacts are significant on both security and environmental fronts. Illegal mining is used by armed groups in Colombia as another revenue stream to fund their conflict against the government. Illegal mining is also an activity conducted by the poor residents of some underdeveloped regions of the aforementioned countries in order to make a living but who are often times taken advantage of by organised crime groups. The illegal mining sector also allows other criminal activities to flourish, particularly in the mining camps. Activities such as human trafficking, for the purpose of forced labour or sex work, is often recorded at the mines and many of the victims are minors. Acts of criminality such as theft, robbery, extortion, drug use, murder, and acts of vigilantism also increase in the areas where illegal mining takes place.

Areas and rivers identified as areas of illegal mining, including in the Madre de Dios region of Peru. Source.

Illegal mining also has devastating environmental impacts. For many of the aforementioned countries, the activity equates to the single largest cause of deforestation. This is of particular importance due to the activities taking place in some of the most bio-diverse areas in the world for fauna and flora, along with destroying the environment on which a number of indigenous communities rely on to live. In addition to deforestation, one of most significant environmental impacts of illegal mining is the poisoning of land and rivers due to the use of mercury. Mercury is used to separate gold from the sludge, and a significant amount of the toxic metal seeps into the ground and rivers each year, impacting food chains and causing health problems for the communities around.

On 19th February 2019, the Government of Peru declared a State of Emergency in the districts of Tambopata, Inambari, Las Piedras and Laberinto, in the region of Madre de Dios, one of the regions most impacted by illegal mining. The declaration involved the deployment 1,500 police and military officers in the region to reduce criminality linked to illegal mining. The State of Emergency will last an initial 60 days, but a number of troops will remain in the area for six months and some constitutional rights will be suspended during the duration. Previous efforts by the Peruvian authorities to put a stop to illegal gold mining have failed to make a significant impact, and only time will tell if this State of Emergency will be successful in halting the activity.

In the first week of March 2019, the security forces moved to the consolidation phase of their fight against insecurity and illegal mining, which according to the Minister of Defense, will involve three mixed temporary bases being installed in the buffer zone of the Tambopata Nature Reserve. One the bases was opened on 5th March 2019. The presence of 100 military and 50 police officers at each base will last for an initial six months. The second part of the consolidation phase is to promote the reforestation of the area. Specialists of the Ministry of Environment have been deployed to help with that task. The third part of the consolidation phase is a development plan to develop the economic activities of local residents whose livelihoods previously relied on the logistics and commerce sectors of illegal mining. 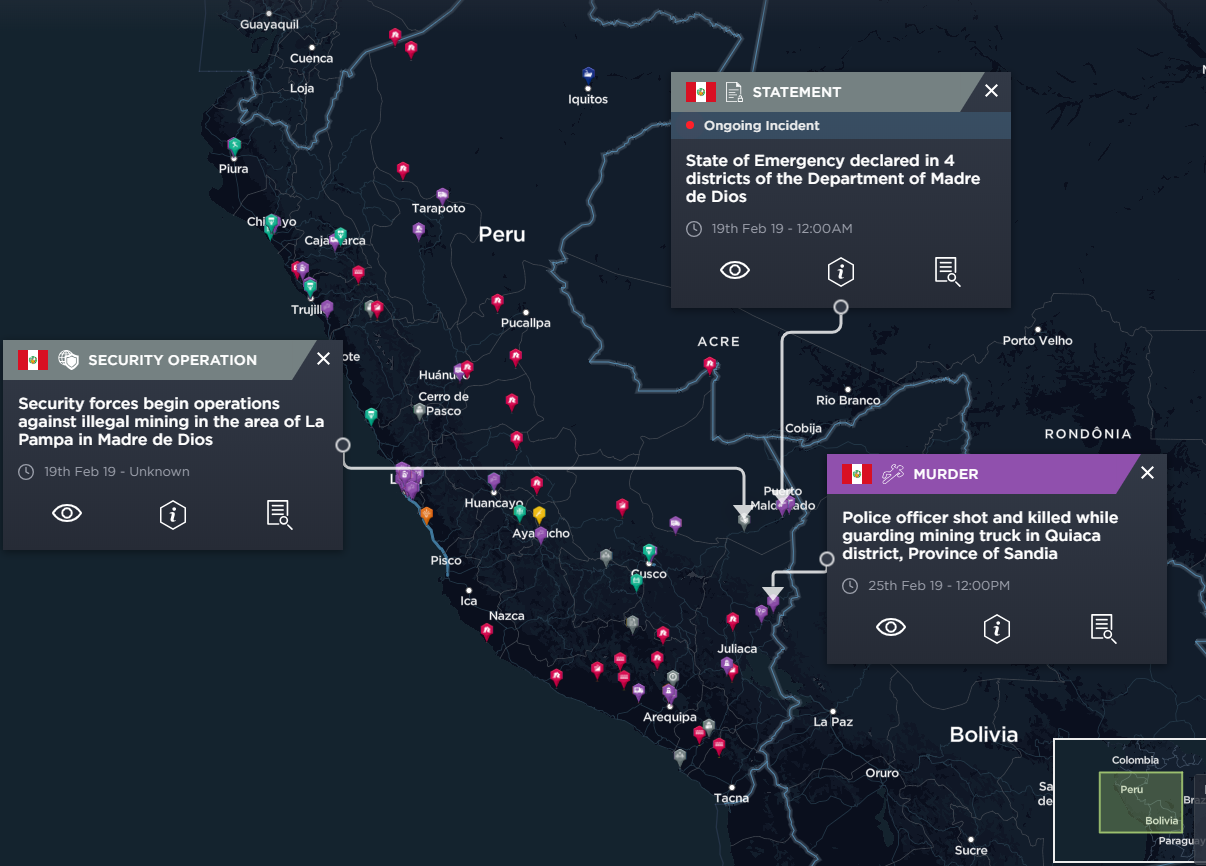 As previously mentioned, illegal mining brings about an increase in criminality. However, legal mining operations also face security, environmental and industrial risks. Significant in the month of February was the attack on two police officers guarding a truck of the Cori Puno SAC mining company in the province of Sandia, in the Region of Puno. The truck was transporting gold from the Untuca mine when it was intercepted by four men who shot and killed one of the guards and wounded the other before fleeing the scene with several kilograms of gold. Authorities have launched a search for the suspects.

The month of February has seen several death and injuries due to landslides and mining shaft collapses at both illegal and legal mining operations across Peru. In early February, four miners were rescued from the Pampahuay coal mine after having been stuck there since the end of January when a landslide blocked their exit. In the middle of the month, two miners were killed, and another was wounded when they were undertaking excavation work and a mine shaft collapsed in the district of Santa Rosa, in the Ancash Region. The deadliest incident also took place in the middle of the month, at an illegal mining camp in the southern region of Puno, when a landslide killed seven individuals. Some of these incidents were caused by the precarious weather conditions the country saw in February which resulted in large scale flooding and landslides. 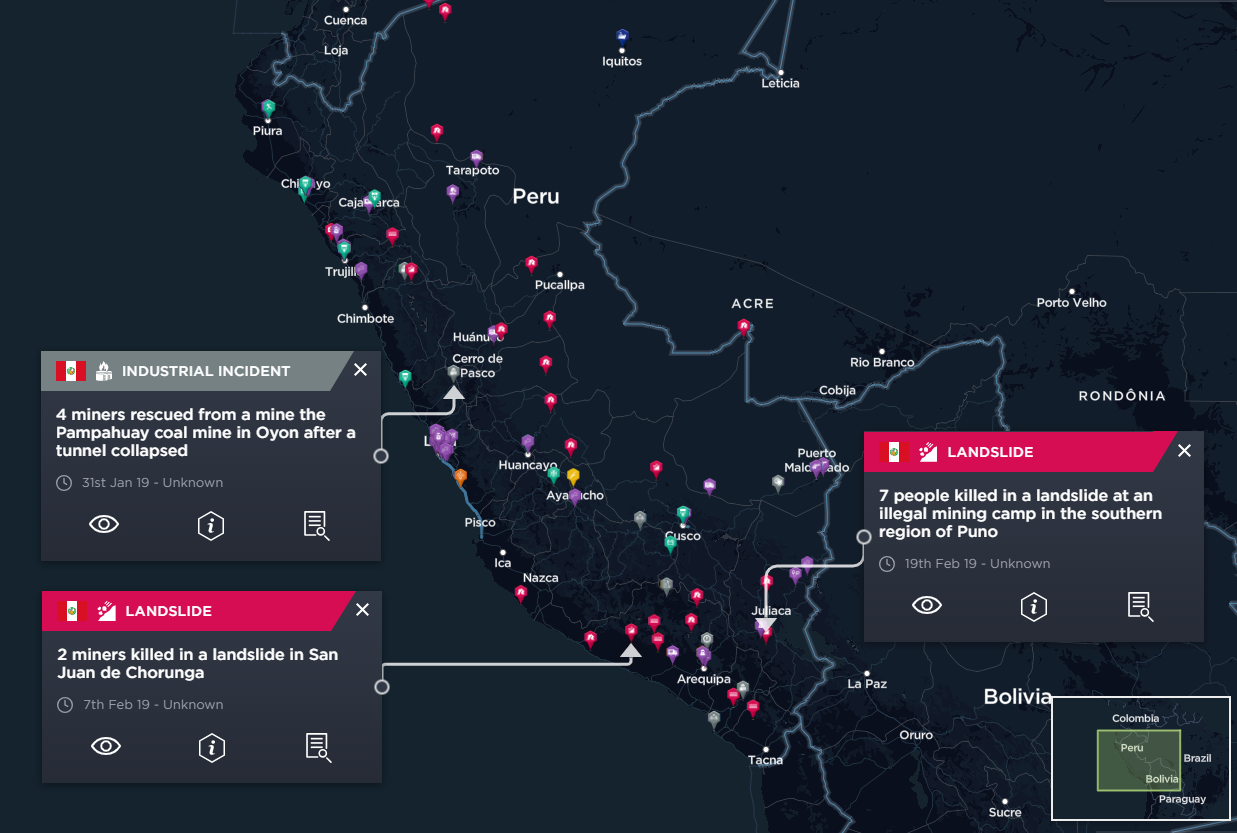 In addition to the criminal, environment and industrial risks legal mining companies face, their operations can and have been affected by social movements. In early February, the residents of the Combayo community, in the Department of Cajamarca, protested against the Buenaventura mining company and U.S.-based Newmont Mining who own the Yanacocha mine. The residents blame the Yanacocha mine for the pollution to the Mashcón River, water shortages in the area, increasing economic disparities, and increasing criminality.

Elsewhere, residents of the community of Nueva Fuerabamba have been blocking the road between the Las Bambas copper mine and the Port of Matarani on the coast, accusing the government of having turned the road crossing their farmland into a highway, and therefore wanting to reach a deal with the government and mining company for its use. The mine is owned by the Minerals and Metals Group (MMG), of which a major shareholder is the Chinese state-owned China Minmetals Corporation. The protest has not affected mining operations, as an alternate route has been used to move the copper to the port. 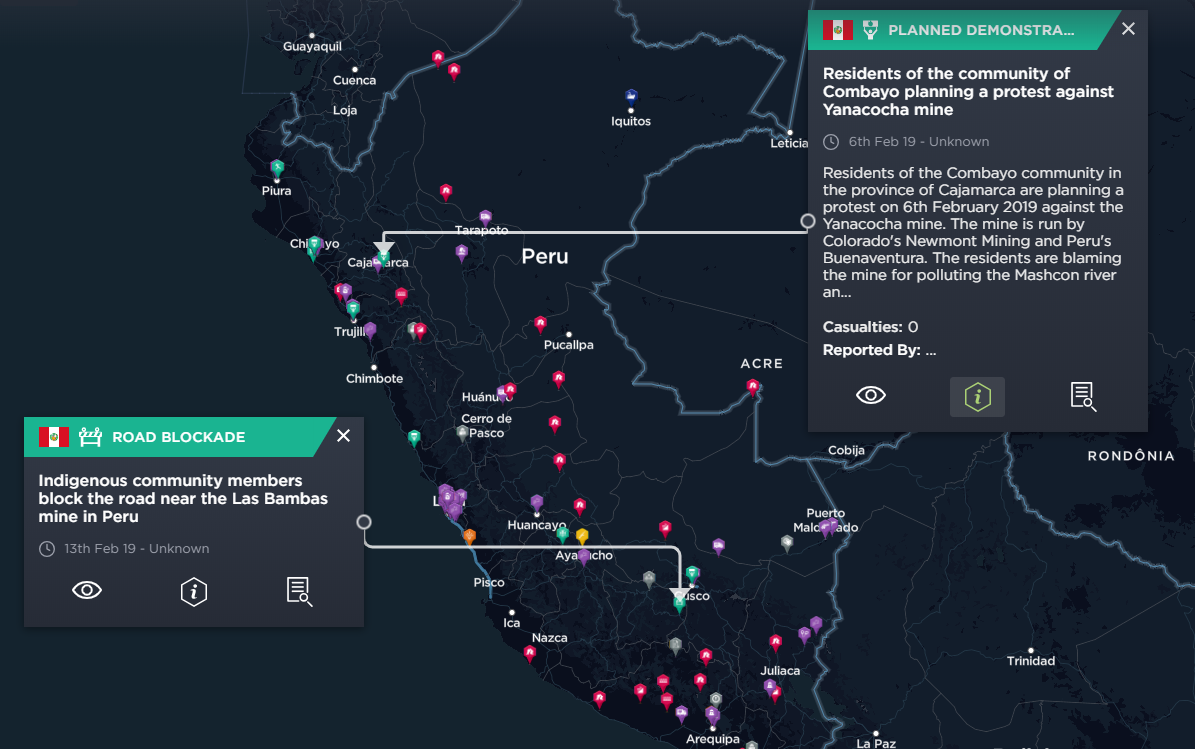 These protests show that the country’s mining industry still has steps to take to reach its 2030 Mining Vision. Two of the goals the vision sets out is for the industry to be socially and territorially inclusive, as well as being environmentally sustainable. These goals seek to close social and economic gaps by involving local residents and indigenous communities within planning and executing mining projects, in addition to ensuring a high level of environmental standards at all stages of a mine’s lifespan.

After the initial two weeks of the anti-illegal mining operation launched by security forces in the Madre de Dios region of Peru, there were reports that soldiers and prosecutors deployed to the area had already found new sites of illegal gold mining. While no mining camps had been built, the reports suggest the new sites had been worked at for several days. This shows the work that still needs to be done by the Government of Peru and its security forces in order to eradicate illegal mining, and that the mere presence of security forces may not be enough.

While it is likely that the joint military-police operation is going to reduce the acts of illegal mining, it will likely not eradicate it completely, especially if the presence of security forces is temporary and they are removed after the mission is perceived to have been accomplished in the next few months. In the meantime, illegal miners will likely be displaced to other geographic areas or undertake other activities until soldiers and police officers are removed from the region.

The most important part of the operation being undertaken in the Madre de Dios region is the third task of the consolidation phase of the security operation, in which the government will work to develop sustainable activities for those previously making their living off illegal mining. Some of these activities may involve the aquaculture and the tourism sector. For a development plan to work, there must be social buy-in from the communities it seeks to assist. A report by Terre des Hommes- Suisse in 2017, stated that some individuals involved in activities surrounding the illegal mining trade such as bartender in the mining camps or even sex workers, who had not been trafficked, were taking the risks of working there due to having no viable alternatives. The task of this phase is to ensure other viable alternatives are provided.

Previous operations in the region, such as in May 2016, lacked the support of local and regional politicians, said to be because of the impact it had on the livelihood of residents relying on income generate directly or indirectly from illegal mining. The government will need to ensure that those it targets with its development plan will be able to earn a similar living then they might have earned in the illegal mining sector, or the plan could ultimately fail to generate any meaningful impact.

The next few months will likely see a decrease in crime in the region of Madre de Dios where the illegal mines are located due to the increased presence of soldiers and police officers. This includes Puerto Maldonado, the capital of the region and a hub for illegal miners where equipment is bought, and gold is sold. Time will tell whether the operation that was launched in February will have a lasting impact. However, because a development takes times to be put in place and for communities to see the benefits, it is likely that a resurgence in illegal mining will be seen and additional joint military-police operations will need to be conducted. Intelligence Fusion will continue to monitor the threats to posed by illegal mining operations in the country, as well as monitoring the threats that have an impact on legal mining.