The Security Situation in Afghanistan Ahead of the Parliamentary Elections

With parliamentary elections set to take place on the 20th October, discourse regarding the security situation in Afghanistan has been consumed with concerns over the Afghan Government’s ability to protect voters. Concerns over the state of security in Afghanistan are well founded, as the Taliban and other militant groups have been able to carry out a series of attacks on a daily basis across Afghanistan, particularly in rural areas. In the major cities such as Jalalabad and Kabul, where government influence is most noticeable, violence is still frequent. IED and suicide attacks occur almost on a weekly basis in the major cities, highlighting that even with government control of the cities being stronger, militant access and influence is still significant. The result of the daily fighting across the country is that the much-anticipated parliamentary election will take place in an atmosphere of general insecurity in which the Afghan Government cannot help but appear overwhelmed.

To provide a summary of the security situation in Afghanistan in the pre-election period, incidents which occurred between the 18th of September and the 9th of October (when this article was written) will be analysed. The below image shows significant incidents in the three-week period and indicates that typical trends in Afghan security (such as high levels of militant control in rural areas) can be observed across the country, with provinces such as Faryab, Farah, Helmand, Nangarhar and Kandahar being major areas of insecurity. 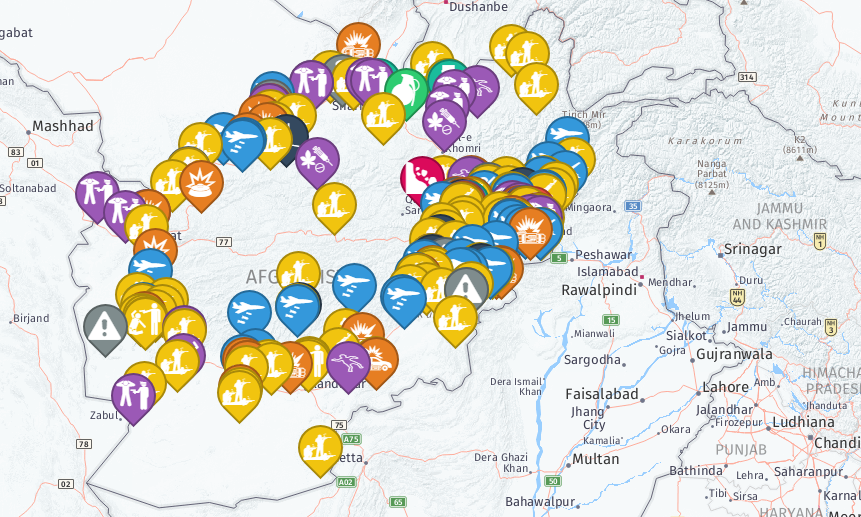 The incident map shows a number of security-related themes which have been particularly prevalent in the three-week period. Perhaps the most pressing of these three themes is the violence aimed at election candidates as they carry out their campaigns across the country. Also noticeable in this period (but by no means limited to this period) is infighting between militant groups in Nangarhar and Farah provinces. In order to provide a summary of the current security situation in Afghanistan, this article will focus on these two main themes.

The Taliban’s silence regarding their stance on the elections was finally broken in early October, when the group released a statement vowing to interrupt the elections, likely through violent means. The threat should be taken seriously, not only does it fit in with general Taliban anti-government rhetoric, it is also well within the group’s capacity to carry out such attacks.

Even before the Taliban released their statement regarding their stance towards the elections, significant levels of violence have already been aimed at election candidates and their supporters. The most high profile of these attacks recorded in this period was an attack which targeted an election rally in the Kama district, killing approximately 14 people. A series of other attacks have also been reported across the country. in this period alone there have been four significant incidents of violence (excluding the incident in the Kama district) involving election candidates

It is not clear how the Taliban intend to disrupt the elections, as the group’s strength across the country leaves a variety of options open. In the past, the Taliban have disrupted the electoral process by targeting voter registration centres with suicide bombers and improvised explosive devices (IEDs.) Therefore, it is likely that similar attacks will take place which may target polling stations and the ANSF personnel who guard them. In response to the threat, the Afghan Government will defend approximately 5,100 polling stations with around 54,000 ANSF personnel. At a glance, the force committed to protecting ballot stations is formidable, however the force will represent a static target, often in positions surrounded by Taliban controlled rural areas. The Taliban also possess the ability to launch a large scale attack on a major population centre in one of the many hostile provinces of the country. Such an attack would not directly target the electoral process (although the implications of such an attack on the electoral process in that region would be major) but would also significantly undermine the strength of the Afghan Government both practically and politically at a critical moment.

A Taliban attack on a major urban centre is by no means out of the question, since the most recent attack on Ghazni City, the situation in Ghazni Province has changed very little. The Taliban continue to control the majority of the province’s district centres and therefore continue to maintain the ability to cut off main resupply routes to the city in the case of an attack. Ghazni is not the only city at threat of such an attack, Gardez, Khost City and Maimana appear to be under significant threat too. The ANSF has so far this year been able to repel such attacks on population centres (albeit after major Taliban infiltrations and the use of significant air support) but the battles have done little to build confidence in the overstretched ANSF.

Lastly, infighting among the Taliban is not a new theme in Afghanistan, however a significant incident involving infighting was recorded in this period in Herat Province. On the 8th of October, a group of Taliban led by Mullah Samad (loyal to Mullah Hebatullah) clashed with another group led by Mullah Abdul Manan Niazi (loyal to Mullah Rasool, a well-known commander of a Taliban splinter faction) in the Guzra district. It is not clear what caused the skirmish to begin, but the two groups main split is over a disagreement regarding who was the rightful successor of Mullah Omar after the commander’s death. It is likely that since the initial split from the main Taliban group, Rasool’s faction has clashed over issues more relevant to the local power struggle in west Afghanistan, as well as broader ideological conflicts.

Fighting Between IS and the Taliban

Despite the IS presence in the north being significantly checked by the large-scale Taliban assault in Jowzjan, fighting between the two groups continues in Nangarhar and Kunar provinces in the east of the country. In Nangarhar, most of the fighting has taken place in the Wazir area of the Khogyani district. Throughout the fighting, air strikes and drone strikes have targeted both sides, inflicting an unknown number of casualties. Local media has claimed that the strikes have targeted both IS and the Taliban, whereas the Taliban have claimed the strikes disproportionately target the Taliban, and claim that this is evidence which supports their claim that the US and the ANSF supports IS. Elsewhere in the east of the country, the Taliban and IS have also fought with each other in the Chapar Dara district of Kunar, where IS also maintains a significant presence. 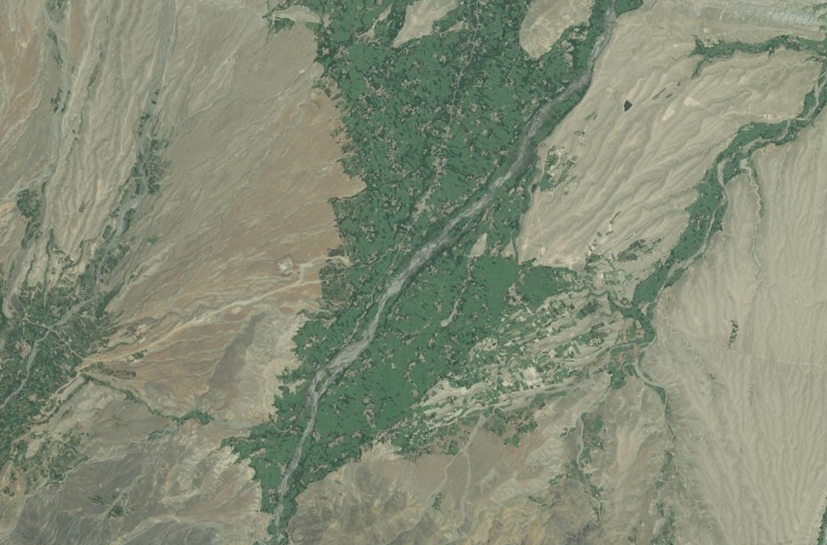 Fighting has also been reported between IS and Lashkar-e-Islam (based in the Khyber Agency) in the Nazyan and Achin districts of Nangarhar Province. The fighting is rarely reported in Afghan media, and therefore the results of the fighting are often unclear. Whilst infighting between militant groups may be perceived as a respite for security forces, the constant clashes only serve to further deteriorate and already violent security situation. 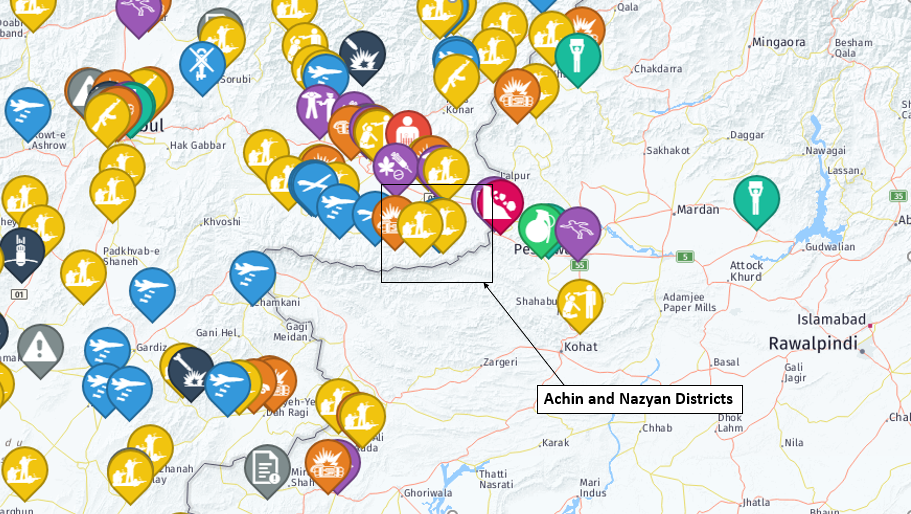 The Afghan Government is determined to go through with the elections, the entire process represents an effort on behalf of Afghan policy makers to portray themselves and their country as one which is redeveloping and on the front foot. However, it is likely that the Taliban’s promise to interfere with the elections which they claim are a ‘malicious American conspiracy’ is not a false claim. With this tense atmosphere in mind, IED and suicide attacks at polling centres should be expected amidst an already volatile situation across rural areas of the country.