The Battle for Marawi City 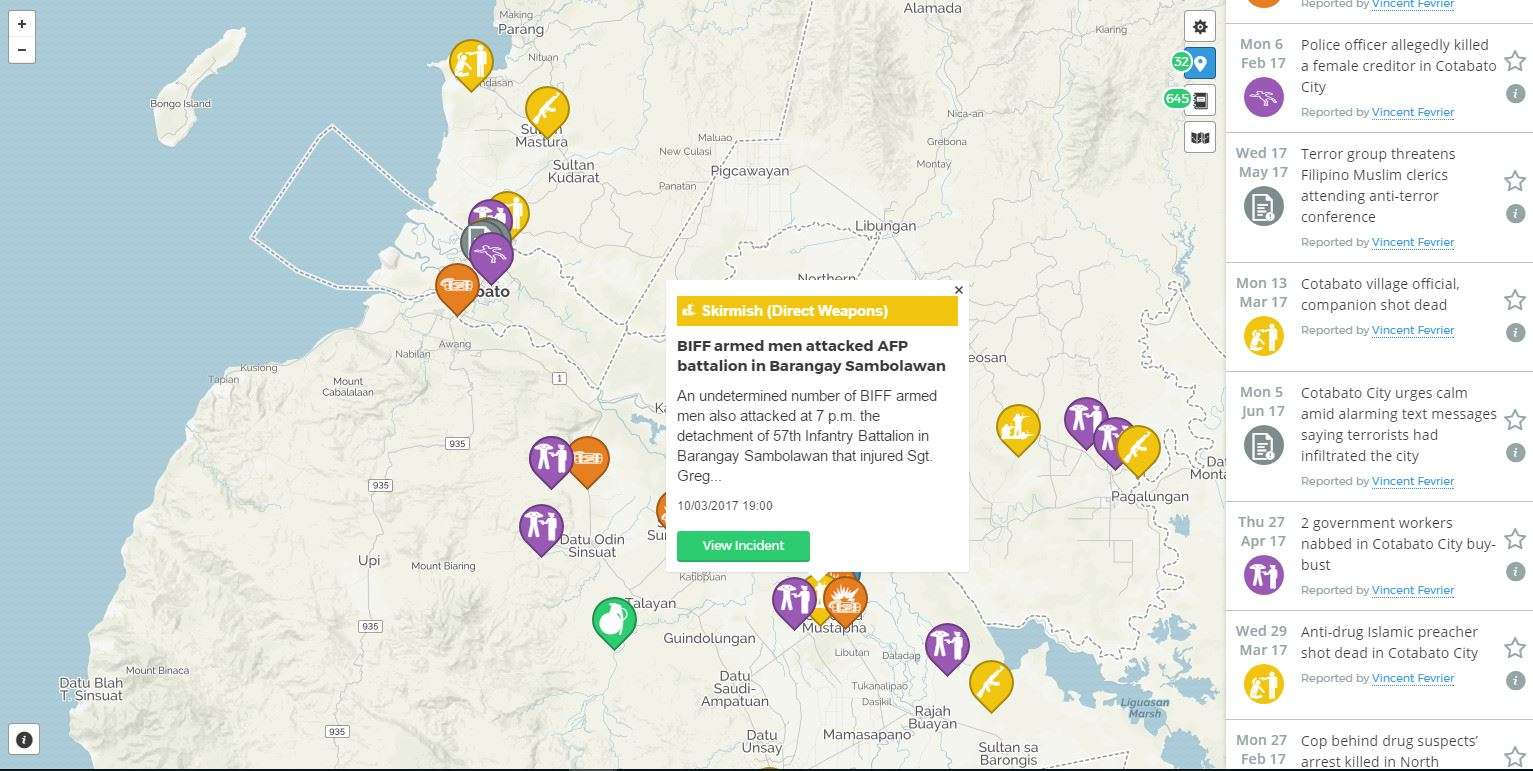 Incidents around Cotabato City including the clash between government forces and BIFF members (Click on above image to expand).
The attack on Marawi City has shown the reach certain groups have within the region. With fighters believed or proven to have come from Indonesia, Malaysia, and other countries within the region, it has shown that the ideology is exportable, and that the free movement of militants is an issue that needs to be addressed by all regional powers. The number of foreign fighters within the ranks of the Maute Group reinforces the fear that with the Islamic State losing territory in Iraq and parts of Syria, that militants will turn to South East Asia as the location for establishing a caliphate, and without the resources that the international community is pouring into the Middle East, a stronghold could well be implemented, particularly in Mindanao.
What has regional powers done to combat it
The crisis in Marawi has sent a clear message to the Philippines’ neighbors that the Islamic State, through its local groups who have pledged allegiance, have the capacity to launch large scale attacks. This threat has prompted countries like Indonesia and Malaysia to undertake new security measures. At the beginning of June, the Philippines along with Indonesia and Malaysia announced they would be undertaking joint air patrols starting on June 19th, to go along with their joint maritime operations in the Sulu Sea to stem the flow of militants between the countries. Militants have been able to travel between the countries due to corruption and porous borders which are vast and hard to monitor.
On May 29th, Indonesia launched Operation Aman Nusa 3. This operation is in direct response to the threat posed by the situation in Marawi City in the Philippines, and would serve to secure the border between the two countries with a deployment of hundreds of Mobile Brigade personnel who would carry maritime patrols, monitor mass organisation activities, intelligence gathering, and coordinate with Densus 88 to monitor any radical elements within the areas of Sangihe and Talaud Islands. On June 6th, Densus 88 in Yogyakarta arrested a suspected terrorist believed to have helped Indonesians travel to Mindanao, where they joined up with groups affiliated to the Islamic State, who are currently in control of parts of Marawi City. On June 8th, the Indonesian Military Commander General Gatot Nurmantyo announced that the country would build additional military bases, some on islands bordering the Philippines such as Morotai Island in North Maluku. Additionally, on the same day, the General announced the dispatch of a Boeing reconnaissance aircraft to North Maluku, which will be used to monitor movements in the province, and combined with maritime patrols, would strengthen resources to stop militants from infiltrating Indonesia from the Philippines and vice versa. 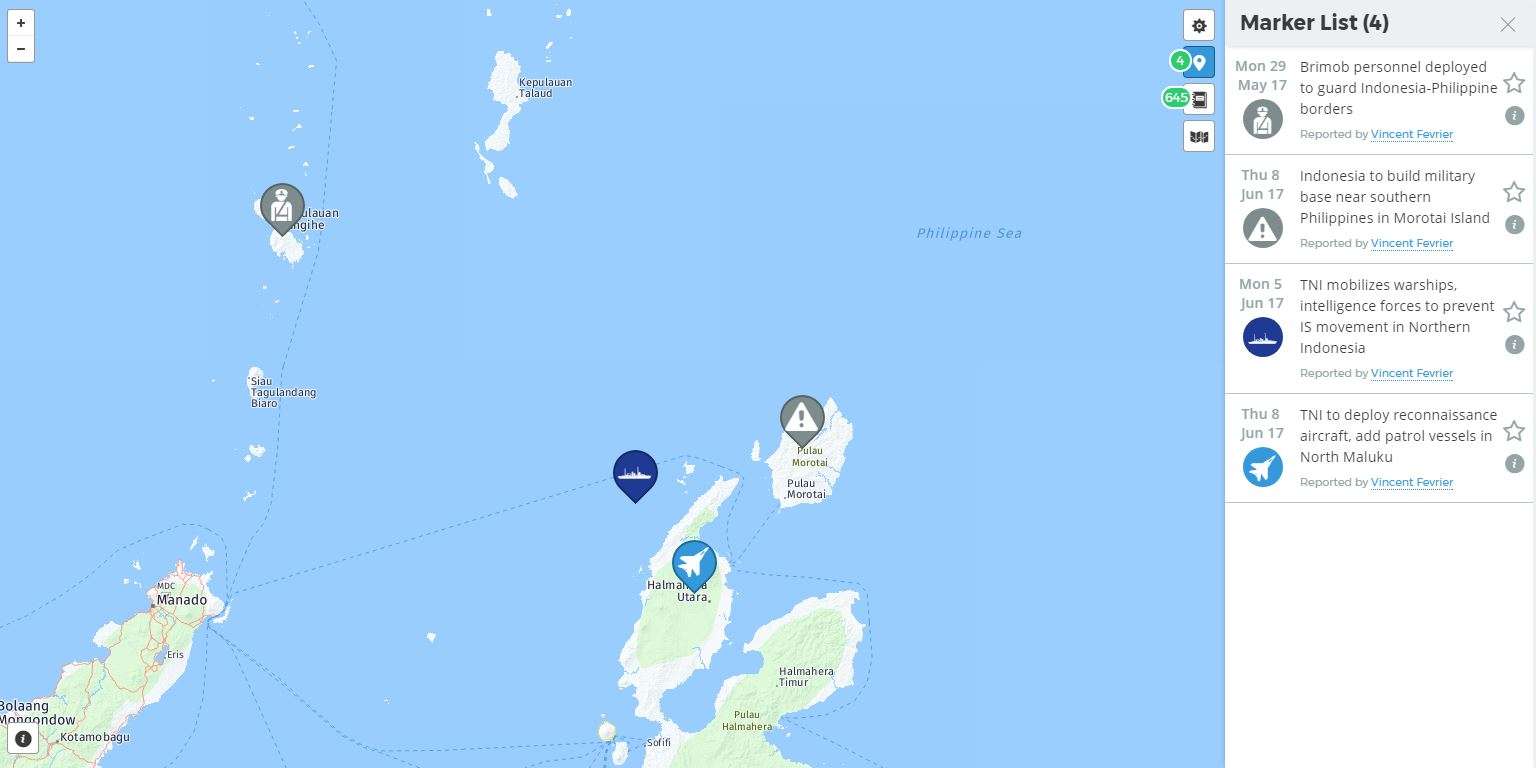 Indonesiaâs response to the crisis in Marawi City. (Click on above image to expand).
Malaysia, on their end, have placed Army troops in Sabah on the border with the Philippines, due to the threat of the current situation in the Philippines. While troops have been deployed there, Malaysia has also placed troops on their northern border with southern Thailand, as an insurgency there also poses a threat, and in May was where a suspected leader of an Islamic State cell had fled before surrendering later in Kelantan.

Malaysia â moving security forces to Sabah on the border with the Philippines
This shows a more serious response by the neighboring countries to an event occurring in the Philippines. They have responded to events before, usually with increased maritime patrols due to Abu Sayyaf kidnappings in the Sulu and Celebes Seas, but this time a larger number of resources are being put in place to combat the threat of the Islamic State from the Philippines, and from the region as a whole.
The Armed Forces of the Philippines will retake Marawi City from the Philippines. It is only a matter of time before the militants are defeated in this battle, but this is not to mean that it will rid the region of the Maute Group or quash the insurgencies. What will need to be observed closely is how President Rodrigo Duterte will use Martial Law after the city is retaken. Will he ask for an extension to it on the grounds of furthering security in the region, but use it to attempt to make gains against other insurgent groups in Mindanao such as the Bangsamoro Islamic Freedom Fighters and the New People’s Army? Only time will tell, as the effects of the crisis will not be fully known until after the battle has ended. In the meantime, it is important the government not only rid Marawi City of the militants, but also ensure a well planned and well funded response to the needs of those displaced. Currently, the surrounding areas of Marawi City are facing a humanitarian crisis with the number of displaced persons, and if the government does not meet the immediate needs of the people, along with their needs once they’re able to return to their homes, it may provide another tool for recruitment for terrorist elements in the surrounding areas using discontent against the government to fuel the flames of conflict.
Back to Reports & Resources