The Attempted Assassination of Al-Nadori: Geolocating a Car Bomb in Libya

General Khalifa Haftar, the most powerful man in eastern Libya, is currently vegetative in a French military hospital. His coalition, the Libyan National Army (LNA), is at risk of fracturing without his leadership. When rumours of his death circulated online some weeks ago it prompted fresh resistance by the Islamist militias the LNA has been fighting around Benghazi. As the Economist reports, while Haftar has been a difficult figure to accommodate in peace negotiations to reunite the country, a shattered LNA increases the number of factions who must be placated for peace to return to Libya.

The LNA is aware of the danger it is in. As rumours of Haftar’s ill-health grew, the Army’s Chief of General Staff Abdul Razek al-Nadori denied that he had already replaced him. Shortly after issuing this denial, a vehicle-borne improvised explosive device (VBIED) was used in an assassination attempt on Al-Nadori in the town of Sidi Khalifah as he travelled from Benghazi to a military base near the town of Marj further north. There are also reports of a gunfight following the explosion. Three civilians were wounded and one killed.

Scene of the crime

This article will show how we can geolocate the exact site of the attack using reports and images.

It is relatively easier to narrow the field of search down. Sidi Khalifah is clearly marked on Wikimapia, Google Maps and Bing Maps. It is indeed north of Benghazi, as the reports suggested. Al-Nadori was travelling north, and Libyans drive on the right side of the road. This will help us understand the orientation of the images of the attack site.

The next step is acquiring images. Google searches of Al-Nadori’s name in Arabic, plus the word Libya, then filtering to results within the last 24 hours gets us Libyan and other Arabic news stories. Several useful images surface.

These images provide us with a roughly 180 degree view of the burnt-out VBIED. It also provides us with sufficient information to work out where the attack took place.

Let’s identify landmarks which will help us find the location. 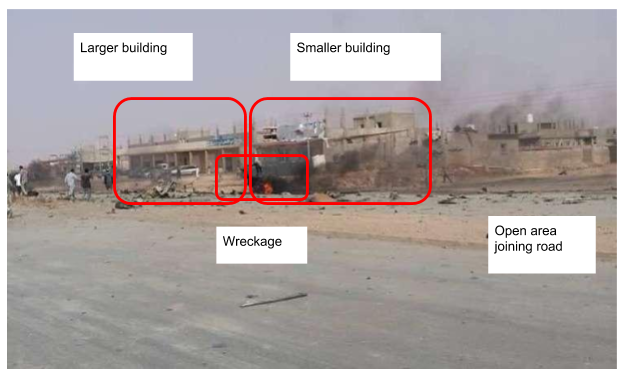 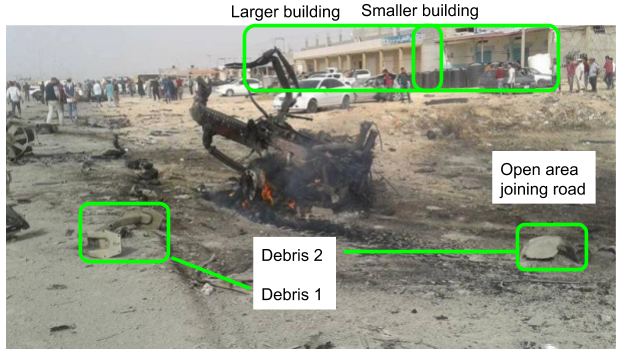 These first two images show roughly the same view of the wreckage of the VBIED. We can see two buildings, one slightly smaller than the other, with a large sandy area between the buildings and the road. There is also an open space to the right of the buildings.

The images are both facing approximately north, with the wreckage to the right of the road. The shadows are also a clue – the photographs appeared shortly after the attack, in the afternoon to evening. The photos are taken facing north, hence the shadows cast to the right, i.e. the east, as the sun sets. 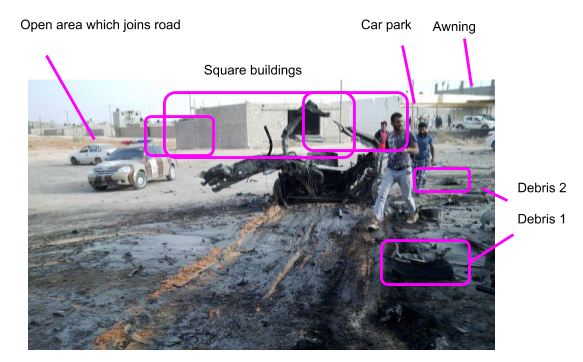 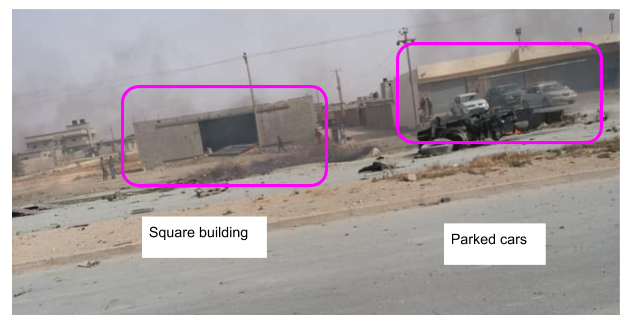 These two images show two square buildings and the open space which joins the road. They also show an open area to the right where we can see parked cars and some kind of awning.

The first photo is taken facing southwards. The wreckage casts a shadow to the left, i.e. the east. The position of the debris is also a clue, reversing which piece of debris is further from the photographer. The second is facing approximately eastwards.

With these four images we can start to search Sidi Khalifah. We know we are looking for

This geolocation goes a long way towards confirming reports that Abdul Razek Al-Nadori was attacked in Sidi Khalifah. Between news reports on the ground and satellite imagery confirming their location we can be confident that this is where he was targeted. This bodes ill for the future stability of the LNA and Libya itself.