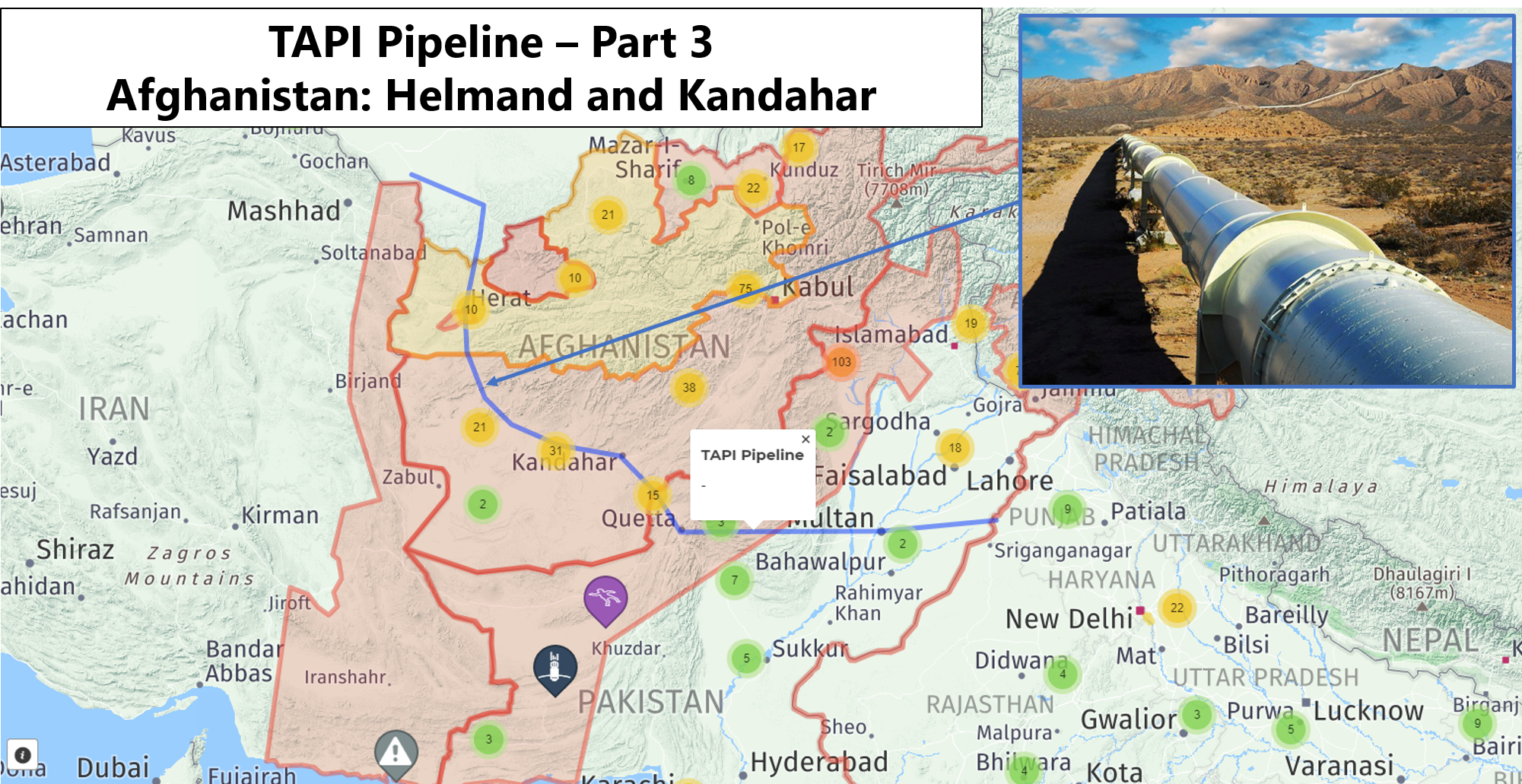 With Taliban control over this section of the route being so prevalent, the Taliban have significant leverage over the TAPI project, whether they choose to sabotage it or not. It is not clear whether as part of the Talibanâs claims to protect TAPI whether or not they expect regular payments in return for their potential cooperation. 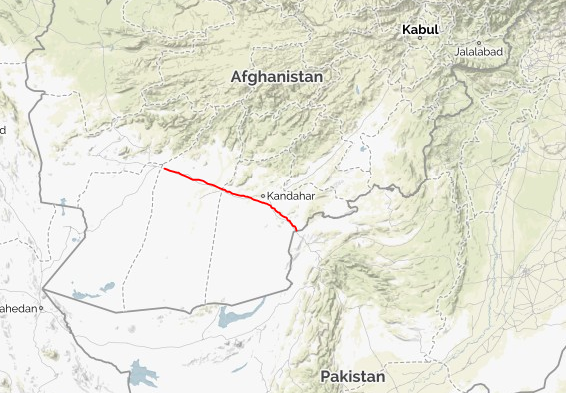 Illustration 1: TAPI’s Route Through Helmand and Kandahar.
Helmand Province
In Helmand, the security related incidents along TAPIâs route are frequent and often involve fire fights between Taliban and security forces. The recent deployment of 300 US Marines to Helmand Province[ii] is also unlikely to significantly alter the security situation across the province. Whilst Helmand is generally insecure, areas such as the Gereshk district are a cause for additional concern.
The Gereshk district (highlighted in Illustration 2) represents a particularly pressing concern from a security perspective. The Gereshk district is heavily contested by the Taliban, and most recently the Taliban attempted to push Security forces out of the district centre during fighting on the 5th of August.[iii] Whilst the ANSF claim to have repelled the attack, the incident does not suggest district wide stability. Local security officials have also claimed that the Taliban have targeted aspects of TAPIâs potential infrastructure by destroying bridges important to TAPIâs construction.[iv] 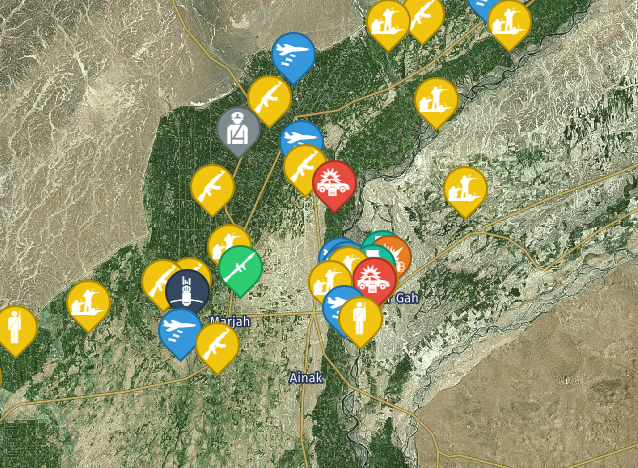 Illustration 2: Notable Incidents in Gereshk Since 01/07/12017.
The Taliban have also staged multiple SVBIED attacks in the district (which can be seen as red icons in Illustration 2) at times using captured ANSF vehicles for the attack. The image to the left which highlights significant incidents between the 1st of August and the 10th November shows that within the Gereshk district there have been 3 SVBIED attacks, all conducted by the Taliban against ANSF positions.
SBVIED Attack, 3rd August, Gereshk District â Taliban militants detonated a SVBIED at a pro-government Songaryan Militia checkpoint in the Yackchal area.SVBIED Attack, 16th August, Gereshk District â Taliban militants used a captured Humvee as a SVBIED, 2 security forces personnel wounded during attack.SVBIED Attack, 6th November, Gereshk District â Taliban militants targeted a Songaryan Militia checkpoint with a SVBIED. Attack followed by firelight.
Insecurity Around Lashkar Gah
Lashkargah, Helmandâs Provincial Capital, lies close to TAPIâs route and security incidents in the area around the city create an ominous outlook for TAPIâs security. The Taliban presence around Lashkargah is of concern to officials within the Afghan security forces, as the central governmentâs control over the city is minimal. Taliban militants have been reported to be infiltrating the city through various means, including by boat across the Helmand River.[v] The result of this Taliban infiltration into Lashkargah is that the Taliban have been able to carry out attacks in the city itself, such as an SVBIED attack outside of the police HQ[vi] on the 22nd August, or an IED attack in a crowded area of the city on the 17th July[vii]. In Response to the Taliban presence around the city, security forces have responded by conducting multiple operations in the area, and have relied heavily on air power to dislodge the militants. The significance of these incidents to the TAPI project is that with Lashkargah being a nearby administration hub, it will likely host staff a working as part of the TAPI project. Therefore, not only are the physical parts of the TAPI Pipeline at risk throughout Helmand, the staff are as well, even in the urban areas of the province which normally are under firmer central government control.
Kandahar Province
Much like Helmand, Kandahar also represents a significant threat to the TAPI Pipeline due to the fact that the province has historically been and continues to be a stronghold of the Taliban insurgency. Therefore, gauging the extent of the threat to the pipeline as it moves through Kandahar is largely determined by whether or not the Talibanâs claim to protect projects such as TAPI can be taken seriously. As this analysis is under the assumption that the pipeline is not completely safe from the Taliban, Kandahar is a major security challenge.
Kandahar still contains a substantial Resolute Support Presence, and the Taliban have frequently targeted NATO convoys in the area. On the 13th November 2017, a NATO convoy was hit by a Taliban SVBIED, wounding 4 US personnel[viii]. Before this incident, another Resolute Support military convoy was attacked by a Taliban SVBIED on the 15th September 2017[ix]. In Both of these incidents, heavily armoured MRAP (Mine Resistant Ambush Protected) vehicles were damaged and required recovering. Kandahar Airport has also attracted some Taliban attention as it serves as a hub of security forces activity. Taliban militants fired rockets into the airports perimeter on the 11th July 2017, although this incident caused little damage.
Despite Resolute Supportâs presence in the area, incidents such as those highlighted show that indigenous security forces still struggle to maintain control over Kandahar Province. The Taliban insurgency is not only a military force in the area, but is also ingrained in the social fabric of the province. The Talibanâs control has allowed them to mediate local disputes, implement legal rulings and manage some administrative tasks in areas under their control. Therefore, protection of staff and assets of the TAPI Pipeline from Taliban attacks continues to present a major challenge to the project as it runs through Kandahar.
Insecurity in the Maiwand District
The Maiwand district which connects Helmand and Kandahar is an area of particular insecurity. Within what is already a volatile province. The image below shows notable security incidents in the Maiwand district since the 1st July 2017, with the most significant incident being the Taliban SVBIED attack on an ANSF base which left 43 out of the 60 ANA personnel defending the position dead.[x] Taliban activity in the area can also be seen in the form of multiple major fire-fights with security forces (yellow markers.) The frequency and the nature (large scale attacks on security forces positions) highlights the extent of Taliban control. 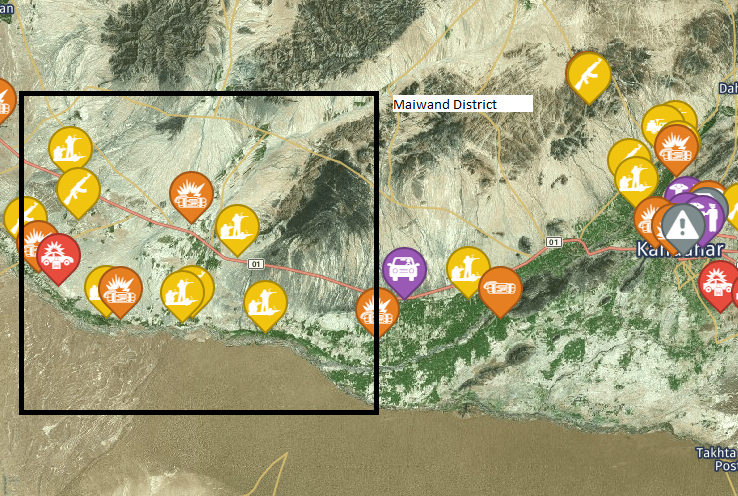 Illustration 3: Security Incidents in Maiwand, 01/05/2017 – 20/11/2017.
Despite the Afghan NUG and the rest of TAPIâs participants eagerness to press on with the TAPI project, insecurity in areas such as Kandahar Provinceâs Maiwand district along the pipelines route continues to present a challenge which is largely unaddressed. The Taliban have demonstrated that they have a sufficient presence in the area to act as a platform to launch attacks against security forces convoys and positions. With the local strengths of the Taliban in mind, the ANSFâs ability to protect the pipeline over a prolonged period of time must be brought into question.
Helmand and Kandahar Summary
Much like the rest of TAPIâs route through Afghanistan, the risk posed to the pipeline is largely defined by whether the Taliban adhere to their rhetoric and protect the project. However, even if the Taliban do choose to protect the pipeline, their control in Helmand and Kandahar gives the group leverage over the NUG. For example, as the security forces presence in the area is minimal, the Taliban will always have the option of sabotaging the pipeline in the face of increased military or diplomatic pressure instigated by the NUG and their foreign allies. The NUG on the other hand, would struggle to prevent such a hypothetical move due to the extent of the Talibanâs control across both Helmand and Kandahar. Furthermore, as part of the TAPI project Afghanistan expects to improve infrastructure, including the construction of new roads so that TAPI staff and vehicles can move across the country with greater ease. The Taliban, who have traditionally opposed the construction of roads due to the benefits they provide for the ANSF, are yet to comment on how they intend to accommodate this into their proposed protection of the pipeline.
[i] https://www.longwarjournal.org/mapping-taliban-control-in-afghanistan
[ii] https://www.nytimes.com/2017/04/29/world/asia/marines-return-to-helmand-province-for-a-job-they-thought-was-done.html
[iii] http://www.khaama.com/major-taliban-offensive-in-helmand-ends-after-almost-48-hours-of-gun-battle-03289
[iv] http://www.tolonews.com/afghanistan/taliban-attacks-pushed-back-gereshk
[v] https://twitter.com/DreamF4ll/status/897525700823056388
[vi] http://afghanistantimes.af/helmand-bombing-five-killed-dozens-wounded/
[vii] http://www.bakhtarnews.com.af/eng/security/item/29274-mine-blast-hurts-six-civilians-including-two-kinds.html
[viii] https://twitter.com/mateenimran12/status/930084063762964480
[ix] http://www.tolonews.com/afghanistan/blast-targets-foreign-forces-kandahar
[x] http://www.1tvnews.af/en/news/afghanistan/31740-43-ana-soldiers-killed-as-taliban-attacks-on-army-base
Back to Reports & Resources