Taliban Attack on Farah City, May 2018

Taliban militants staged a bold attack on Farah City, the Provincial Capital of Farah Province, early on Tuesday morning. The fighting began at around 2am and the Taliban are reported to have closed in on the city from all sides. Before long, the Taliban had gained control of large areas of the city, with particularly heavy fighting taking place in the 1st, 3rd and 4th police districts. Not long after the fighting, local sources began to report that the Taliban had broken into a prison, overrun an NDS compound as well as a police HQ. ANSF reinforcements were sent to the city shortly after the attack began, one video showed an ANSF Humvee missing a tyre entering the city. Afghan commandos were pictured arriving at the city in pick-up trucks mounted with heavy weaponry.

As expected, NATO forces were not willing to let the city fall into Taliban hands, such a defeat would seriously damage the NATO strategy at all levels, from tactical through to political. In response to the attack, US A-10s were allegedly deployed to target militants, however, some sources claimed that the A-10s were only permitted to do ‘show of force’ over flights, probably due to fears of civilian casualties in the city. Whilst the A-10s were not conducting strikes, an MQ-9 reaper drone was active during the fighting and footage has been released showing militants being targeted. Afghan gunships were pictured carrying out airstrikes in the city.

Figure 1: Still from footage released of drone strikes on the 15th May during fighting around Farah City

The attack is significant for multiple reasons, the most important being that Farah City is an important urban centre, which has typically been a stronghold of governmental influence and out of the reach of the Taliban. This is reinforced by frequent statements from US forces in the country which aim to highlight that the Taliban’s control is limited to rural areas. The attack on Farah was a break from the trend, although it should be noted that the attack was staged in Taliban controlled rural areas surrounding the city.

The City’s proximity to the Iran-Afghan border also raised some suspicions that Iran was involved in the attack. Iran has been involved with the Taliban in recent years in the Farah region, mostly to enable Iran to have a say in events on the other side of their own border. Whether or not Iran was involved in the attack is unclear. An element of involvement is possible, either in the form of funding, logistical support, intelligence support or the supply of weapons, but such possibilities are unconfirmed. One source highlighted that the Iranian word for ‘roundabout’ or ‘square’ was used in a video by a Taliban fighter rather than referring to it in a local dialect, however this is also unconfirmed and does not point directly towards Iranian involvement in the attack.

A war of words also erupted almost immediately after the attack, however, this is nothing new in the ongoing conflict in Afghanistan. Local media sources which are generally pro-government, quickly claimed that the Taliban attack had been repelled, whereas Taliban sources claimed to have complete control of the city. In reality, the situation on the ground appears to be somewhere in the middle. Reports of Taliban militants withdrawing from the city after the initial attack are plausible, as the Taliban often overrun positions and then withdraw before air assets or reinforcements can be deployed in the area. However, militants also remained in the city, and continued to fight, with clashes continuing at the time this analysis was written. 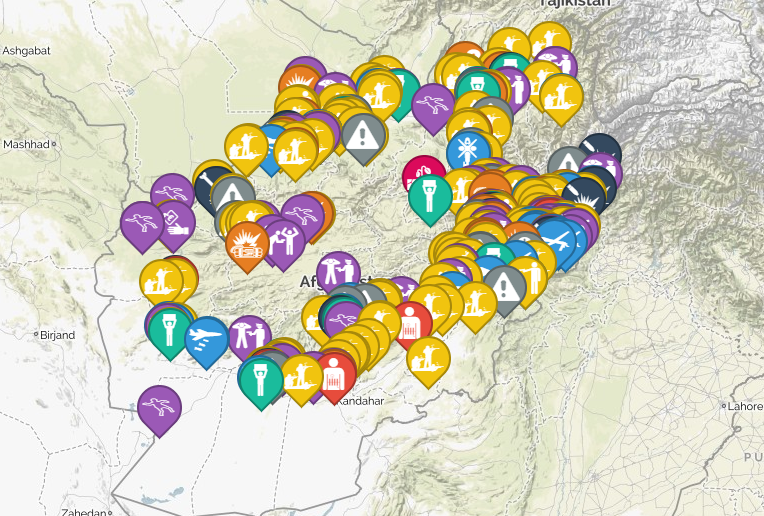 The Taliban also appeared to be particularly active on social media throughout the attack, using social media platforms as a force multiplier, as an effective tool in a war heavily influenced by public perception. The Taliban also reassured residents via WhatsApp to stay in their homes, and that the Taliban would not harm them. Despite these reassurances, reports quickly emerged that the Taliban were checking for pro-government civilians among the fleeing people at checkpoints set up around the city. Twitter in particular hosts a number of accounts which display levels of sympathy to the Taliban insurgency, and appear to have access to videos directly from the Taliban. Among these videos were clips of Taliban militants in the main square of the city, speaking with locals and seemingly not near combat. Other videos emerged during the fighting showing scenes which claimed to show Taliban militants inside of the Police HQ after it was overrun. These videos remain unverified, but the videos and images cannot be dismissed out of hand and should be considered in analysis. In response to media released by the Taliban, Resolute Support and the Afghan Government appeared unable to counter the flooding on social media with pro-Taliban media sources, and instead stuck to a narrative which claimed the city was cleared of Taliban. These claims appear to have significantly damaged the credibility of NATO and Afghan media sources in the eyes of Afghans.

The attack on Farah City evidently took security forces by surprise in some respects; however Taliban pressure on the provincial capital has been significant for a prolonged period of time. Heavy fighting has taken place in the Bala Bulok district on an almost daily basis, with ANSF casualties being particularly heavy. It is likely that the remaining Taliban in the city will either withdraw or will be slowly forced out by security forces as reinforcements arrive, leaving the Taliban with few tactical gains in the conventional sense of the term, however the broader outcome of the attack is negative for the Afghan Government and their NATO allies. The Taliban showed that they can not only attack urban centres but can actually capture large areas. Furthermore, the attack coincided with attacks elsewhere in the country such as Ghazni and Badghis provinces, forcing security forces to spread out. Additional efforts to interdict reinforcing security forces (via IEDs or ambushes on main roads) could have severely restricted the ANSFs capability to respond. It is not clear if the attacks in Badghis and Ghazni were coordinated with the Farah City attack, but the ability to stage such large scale attacks across the country raises questions about the USA’s claims that the Taliban is on the metaphorical back foot.