Sweden: A Case Study in Security

Sweden has seen recent high profile coverage in international media surrounding its immigration policies, attempts at integration and controversial âno goâ zones. In 2016 the Hungarian government introduced a website that alleged that as many as 900 “no-go zones” exist in major cities across Europe including at least 55 in Sweden. These zones were allegedly revealed in a report by Sweden’s National Criminal Investigation Service, where attacks on officers were detailed, including police cars being stoned by masked groups. These areas were put on a “blacklist” which are then divided into three categories from “risk areas” to “seriously vulnerable”. These areas are generally high in immigrant population, suffer high gang related crime and have poor levels of employment. Critics cite that this problem is due to a lack of a successful national integration policy and a heavily regulated jobs market preventing immigrants from gaining employment. This has been exacerbated by the recent influx of high numbers of migrants in the last few years.
However this generalisation fails to address in more detail the reasons for a rise in parallel societies within these neighbourhoods, increasing attacks on police, an increase in sexual violence nationally and an epidemic of arson and assaults occurring in urban areas in certain pockets of Sweden. As security and risk specialists the impact of this rise in criminality has a serious impact for conducting business operations and also ensuring client safety. We look in detail at some of the following statistics and information from our coverage of Sweden to assess what is happening at a granular level that is relevant for travellers and businesses. 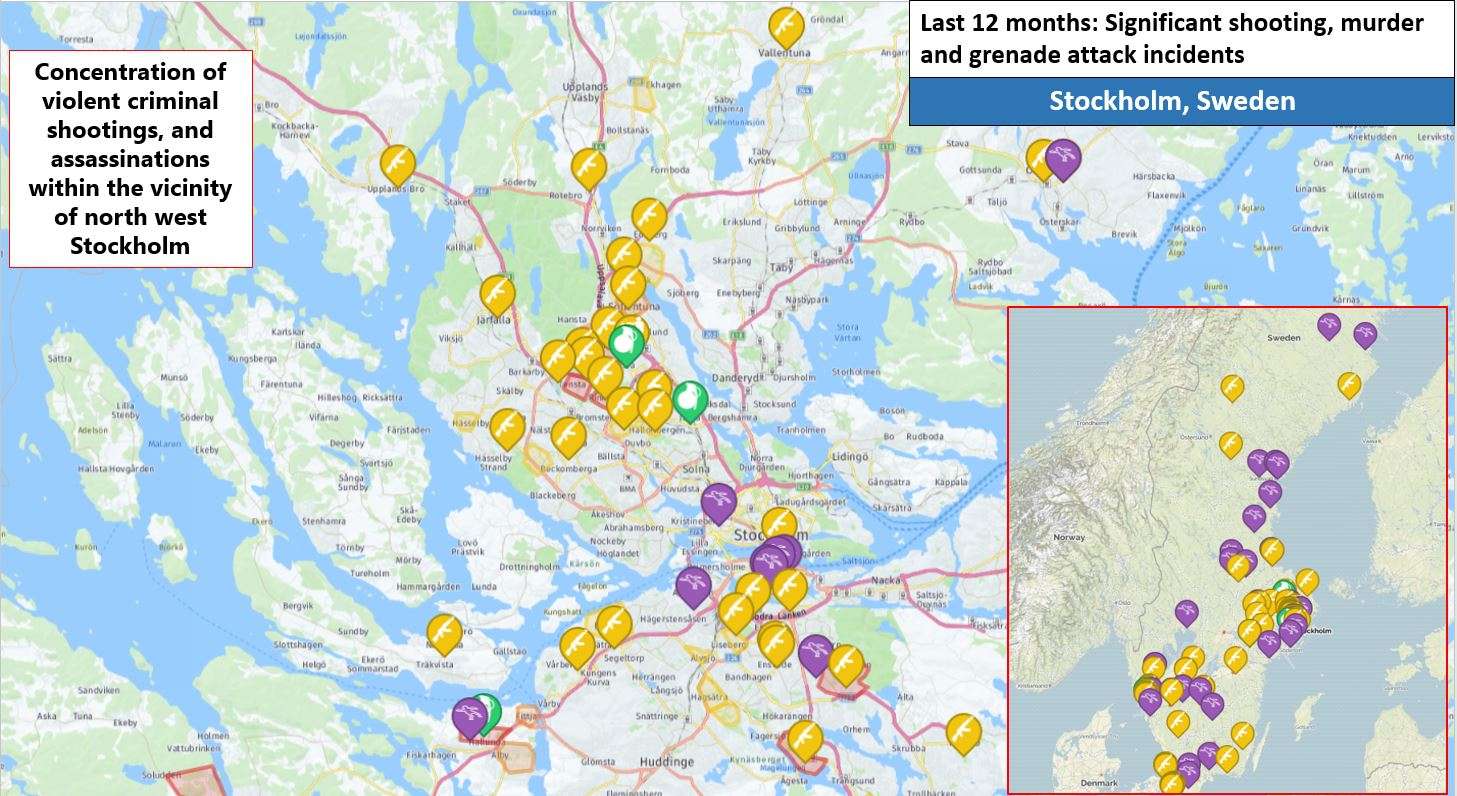 Stockholm. Last 12 months: Significant shooting, murder and grenade attack incidents: Expand on Image for more detail
Statistics over the last 12 months ( up to June 2017) illustrate a concentration of violent incident activity in the vicinity of north west Stockholm, primarily in or within proximity to the neighbourhoods of Rinkby, Husby and Tensta. These three areas are known as areas with a high immigrant population mainly originating from Somalia and the Middle East. Rinkby especially has gained a reputation for rioting and unrest in recent years. Police are reported to be reluctant to enter these areas without reinforcements and community liaison present. Several journalists have been attacked or intimidated in these areas as well as regular incidents of arson attacks mainly centred on vehicles, apartments and container bins. Ongoing gang related violence has led to increasing lethality and the use of grenades and automatic rifles that previously has not been witnessed on such a scale in Sweden. Intelligence Fusion has logged multiple incidents involving Kalashnikov’s and multiple casualties ranging from targeted assassinations to drive-by shootings and armed robberies (which are not shown on the image). Gang related IED and grenade attacks have also been reported primarily in the vicinity of Gothenburg and MalmÃ¶.
In the Stockholm metropolitan area over the 12 month reporting period, Intelligence Fusion recorded 46 significant shooting or murder incidents. In the same period 108 similar incidents were reported in London. However it is important to consider that Greater London has a population of approximately 8.6 million ( 2016) compared to 2.2 million (2016) in metropolitan Stockholm. As another comparison, Paris, with a large suburban population estimated at 10.5 million (2016) recorded 106 similar incidents in the same period.*
*Note: High profile terrorist attacks are not included in the statistics.
Sweden Migrants Attack 60 Minutes Crew In Rinkby, Stockholm

Stockholm. Last 12 months: Significant armed robbery incidents: Expand on Image for more detail
Armed robberies have increased in frequency and scope in the last 12 months across Sweden. Once again within Stockholm, the north western area of the city shows a concentration of armed robberies concentrating primarily on petrol stations, local businesses and individuals such as taxi drivers. Tellingly Intelligence Fusion analysts have witnessed an increase in the scale and nature of such robberies progressing from single men armed with knives or handguns to larger groups of individuals armed with multiple weapons and potentially increasingly willing to use violence. Within central Stockholm gold and jewellery shops have been targeted along with more traditional targets such as money exchanges and local technology businesses such as mobile phone shops. One increasingly concerning trend is the rise in car jackings and robberies of vehicles from individuals by armed groups or individuals. Prestige cars such as Audi or BMWs are generally targeted by criminals who ambush victims in car parks. The incidents taken in the above image are examples of these types of crimes. Full details, locations and analysis of all incidents are available to subscribers. 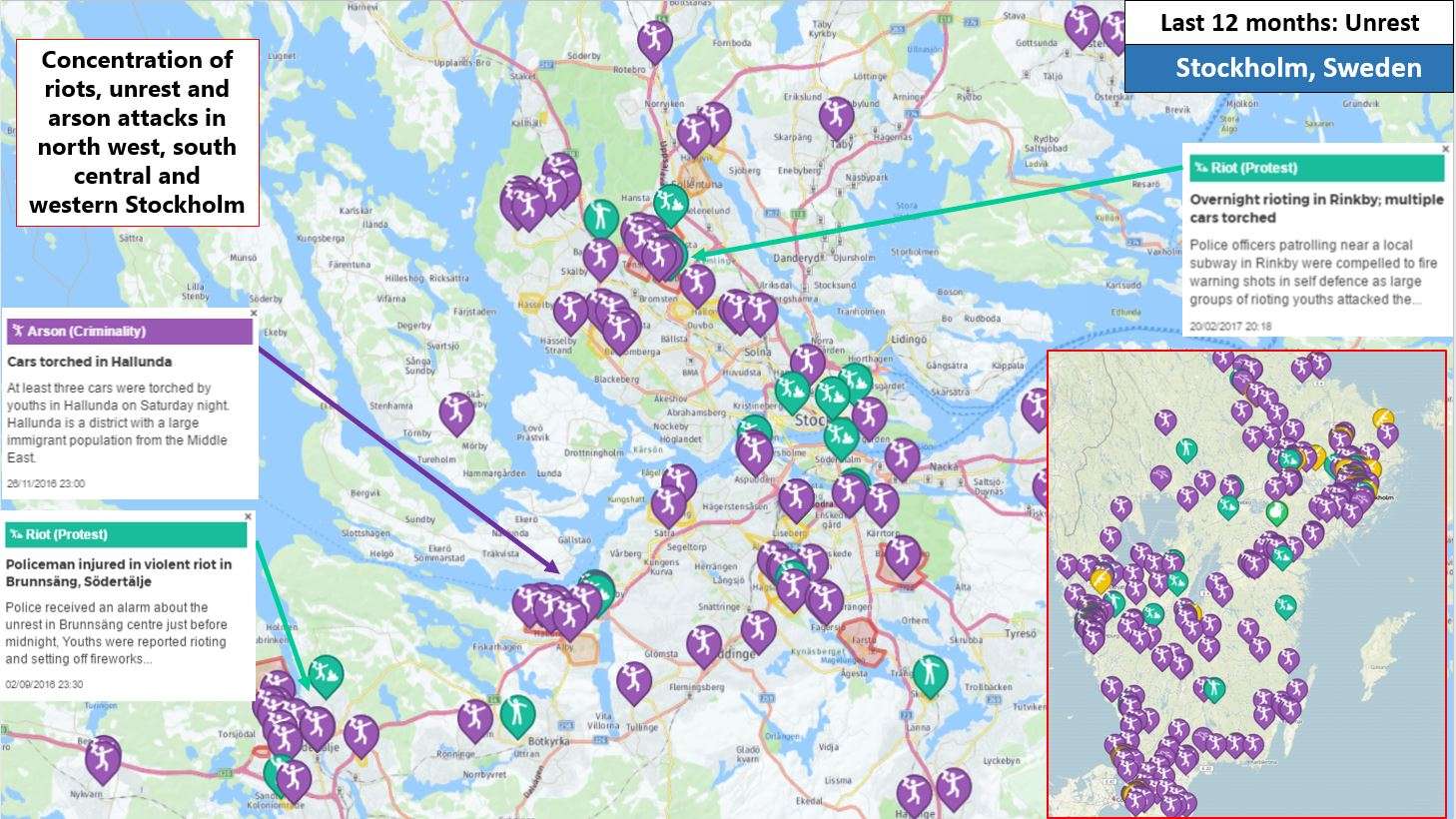 Stockholm. Last 12 months: Significant arson and rioting incidents: Expand on Image for more detail
Social unrest and rioting by youths is prevalent throughout much of the Stockholm suburbs but primarily concentrated in areas with high populations of immigrants. Arson attacks primarily concentrate on torching vehicles, apartment complexes, industrial sites, schools and containers. In the western suburbs of Hallunda and Norsborg a series of arson attacks and rioting has been reported as well as in HagsÃ¤trad in south central Stockholm. Once again Rinkby, Husby and Tensta in north west Sweden feature predominantly in this incident category as well as further west in JÃ¤rfÃ¤lla. Police and emergency services are routinely attacked with stones and fireworks when entering these areas. This phenomenon has now spread rapidly to other more regional urban areas throughout Sweden, coinciding with the recent influx of migrants and refugees into the country. Arson attacks on refugee centres in Sweden have also been reported although many of them have, at present, been initiated by the inhabitants either unhappy at their circumstances or as a result of individual or gang related violence. However, it is likely that attacks on these locations by extreme right wing or nationalist groups may increase in the coming months. The incidents taken in the above image are examples of these general types of crimes. Full details, locations and analysis of all incidents are available to subscribers.

MalmÃ¶ and Gothenburg 2017: Significant shooting, grenade, arson and rioting incidents: Expand on Image for more detail. Note: IED related incidents have not been included in the image but are also recorded.
MalmÃ¶ and Gothenburg also show concentrations of unrest and violence specifically in areas with a large immigrant population such as RosengÃ¥rd and Angered. As well as these localities similar patterns are witnessed in smaller cities such as Helsingborg, Uppsala, VÃ¤sterÃ¥s and others. Full details, locations and analysis of all incidents are available to subscribers. Armed robberies are also frequent with similar trends and patterns as reported on with Stockholm. 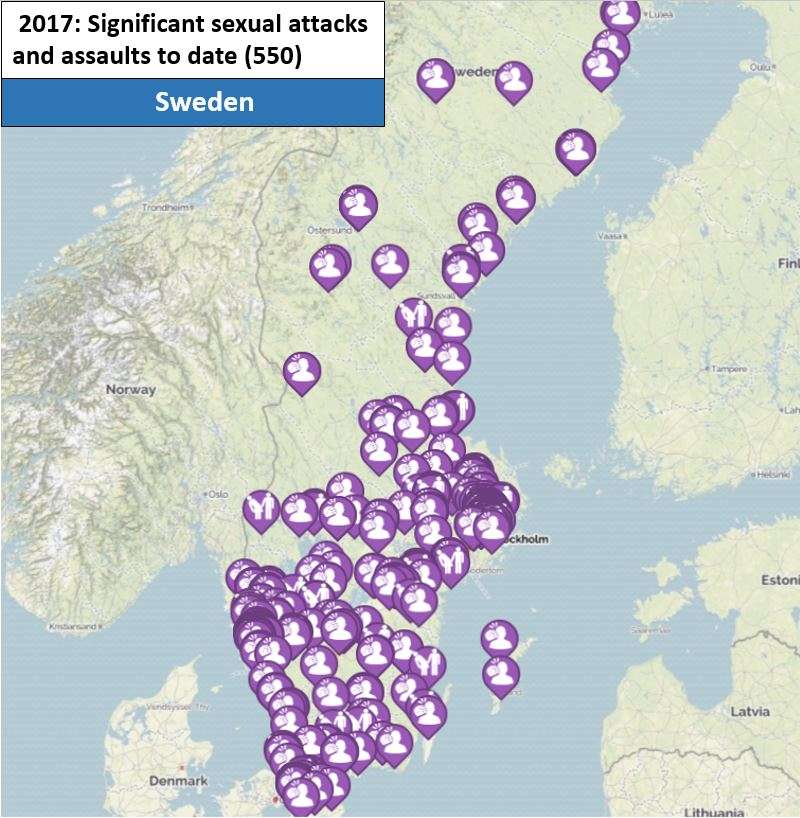 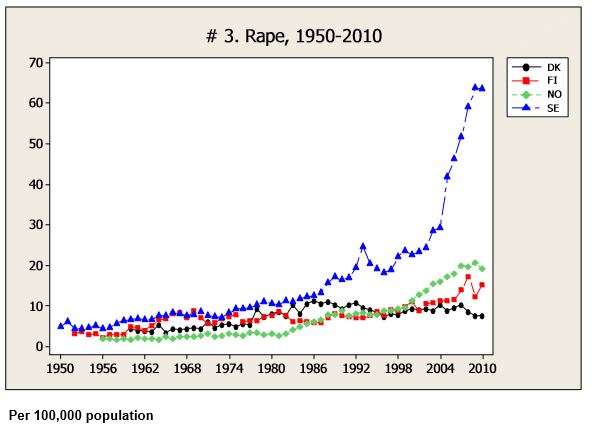 Nordic Criminal Statistics 1950 – 2010 Report. 8th revised edition. Hanns von Hofer, Tapio Lappi-SeppÃ¤lÃ¤, Lars Westfelt Kriminologiska institutionen Stockholms universitet 2012.
Sweden has also witnessed a much media reported spike in sexual attacks and general assaults in recent times. Incident reporting trends witnessed a sharp increase in the summer of 2016 coinciding with improved weather, longer hours of sunlight, and the beginning of the festival and party season. We expect this trend to repeat itself once again in the summer of 2017. Many of the reported assaults have also been random attacks on pedestrians, attacks on security guards guarding property or people employed in public transport or retail. Once again full details and further analysis reporting is available to subscribers. 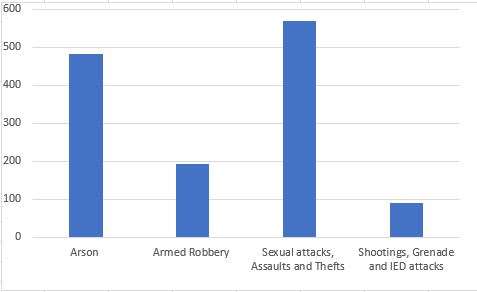 Sweden 2017: Overall Incidents to date ( 28 June 2017, Intelligence Fusion Stats)
Conclusion
Much of our incident data correspondents to a general conclusion that social instability and unrest is escalating within Sweden. Businesses operating in Sweden will need to review their own safety and security procedures if active in vulnerable urban areas specifically concerning site security and the safety of assets and potentially employees if working and/or travelling to these areas. With increasing pressures on policing resources, businesses may need to invest in private security and effective intelligence analysis to allow them to operate in an increasingly challenging business environment. If you or your business are concerned about Sweden or wider European security please contact us to find out how we can assist you.
Back to Reports & Resources