A suspected chemical weapons attack which took place on the 7th of April has significantly worsened relations between international actors involved in the war in Syria. The attack itself is still under review, as Syria’s allies in the form of Russia and Iran have denied the attack took place, whereas the USA and their own allies appear to have levelled blame directly at the Syrian Government and their backers. The USA made clear that they intended to retaliate to the suspected chemical weapons attack in much the same way as they did in April 2017, when 59 cruise missiles were fired at targets in Syria. In response to the retaliatory rhetoric emanating from Washington, pro-Syrian Government forces have rapidly redeployed their forces in an attempt to pre-empt the US strikes. This assessment aims to provide a summary of the troop movements which have taken place in relation to the expected US response to the initial suspected chemical weapons attack.

President Trump’s use of social media in recent events has acted as an indicator of Trump’s intentions but must simultaneously not be taken as firm statements of US intentions. Throughout the heightened diplomatic tensions after the chemical strike, Trump’s discourse online has generally pointed towards armed retaliation. For example, a Tweet made by Trump’s official account threatened the use of missiles in response to the attack (pictured below.) Other significant quotes which can be taken from the US President’s social media include ‘Our relationship with Russia is worse now than it ever has been.’ Whilst analysis of Trump’s social media is difficult, the Tweets shed light on the general stance of Trump, and his domestic supporters.

The USA does not stand alone and multiple allied nations have pledged their support for the USA to varying extents. The UK, France and Saudi Arabia have all expressed support for a US response, and Israel has already shown its willingness to act forcefully in Syria in a way which complements the USA’s own broader strategy.

Russia, the Syrian Government and Iran on the other hand have denied that the attack took place, and have accused various groups backed by the West of fabricating the attack. Russia has claimed that any US missiles will be shot down whilst Iran appear to be largely concerned with punishing Israel for their alleged airstrikes on the T-4 Airbase, which targeted Iranian assets

The below image shows a summary of troop movements made by forces aligned with the Syrian Government after the chemical weapons attack, in anticipation of the US retaliatory strike. Not included in the image is the departure of 3 long-range Russian bombers on the 12th April from their base in Russia, reportedly believed to be heading to the Hamedan Airbase in Iran.

Syrian Government forces moved equipment from Deir Ezzor Military Airport, 11th April – Aircraft capable of flight were reported to have been flown out of the position, and damaged aircraft were transported on trucks. Other vehicles with covered cargo areas were also seen in the convoy leaving the position. The likely destination of the convoy was the al-Talai’I Camp. 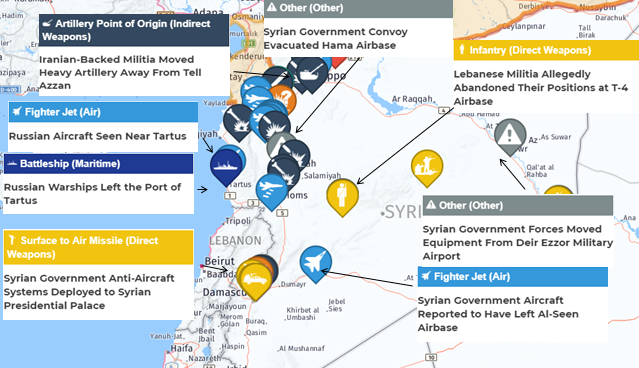 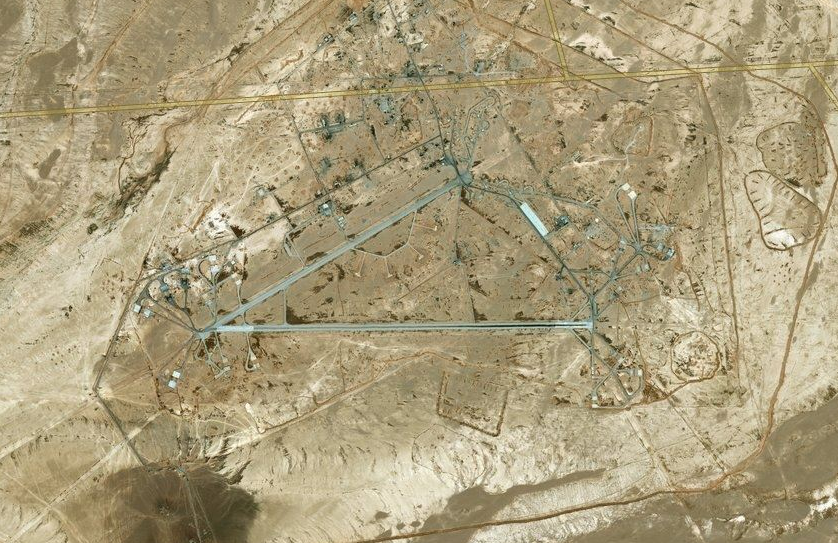 Syrian Government convoy evacuated Hama Airbase, 11th April – The convoy was reported to be carrying ammunition and other equipment out of Hama airbase, likely destination was Humeimim Airbase, where Russian personnel are stationed.

The USA and their allies have taken longer to deploy and mobilise their assets. The key deployment from a US perspective has been the deployment of the USN Carrier Strike Group 8, which consists of the USS Harry Truman aircraft carrier, Carrier Air Wing VII, USS Hué City missile cruiser, 6x Arleigh Burke-class Destroyers and 1 Oliver Hazard Perry-class frigate. The carrier strike group will join the USS Donald Cook which is already off the coast of Syria. Some estimates have suggested that the carrier group will not be on station until approximately the 22nd April, potentially suggesting a longer term approach. In addition to naval assets, the USA also has significant air assets stationed in the area, with B1-B Lancers stationed in Qatar and Strike Eagles in Mowafaq al Salti (Jordan.)

In addition, the UK has moved submarines assets within missile range in case of a strike against Syrian targets. In the air, the RAF has increased activity at RAF Akrotiri in Cyprus with the arrival of Tornado fighter-bombers at the airfield. France has proven to be supportive of US strikes in Syria, and also has the capacity to support US operations with their own air assets. France has Rafale squadrons based at Prince Hassan Airfield (Jordan) and at al-Dhafra (UAE.)

The deployments of the USA and their allies suggest that the likely retaliation will come in the form of a series of missile strikes. Whether these strikes will be delivered by sea or air or both is not clear as the recent movement of US and allied forces keeps both options open.

It is currently difficult to predict what the targets of a potential US retaliatory strike would be, but previous US strikes suggest that Syrian Government airbases are a likely target. Airbases such as al-Nayrab, Hama and al-Seen are all seen as likely targets, yet the public announcement of a US response and the nature of US assets in theatre have allowed Syrian Government forces to predict and respond to potential strikes on these targets. Other likely targets include chemical weapons facilities, such as the Scientific Studies Research Centre in Damascus.

As the USA’s response has taken longer to materialise than in previous similar incidents, the possibility for negotiations and discussion between the USA and Russia is still open, which could negate the need for a kinetic strike on Syrian targets. The success of such a resolution would be, with recent disagreements at the UN Security Council meeting in mind, difficult to tell. In addition, conflict overseas cannot be separated entirely from domestic politics, and President Trump is under immense pressure to be seen to be doing something in retaliation. Russian President Putin, whose domestic political strength is heavily influenced by his persona of strength, would be in a similar position if potential US strikes overtly targeted Russian personnel or facilities.

Therefore, raw strategic and tactical concerns are closely linked to domestic policy in both the Kremlin and the Whitehouse, further complicating an already difficult and potentially volatile decision making process. As a result both sides are forced to compromise between appeasing voters back home and selecting the most effective response, making logical assumptions of their actions difficult.