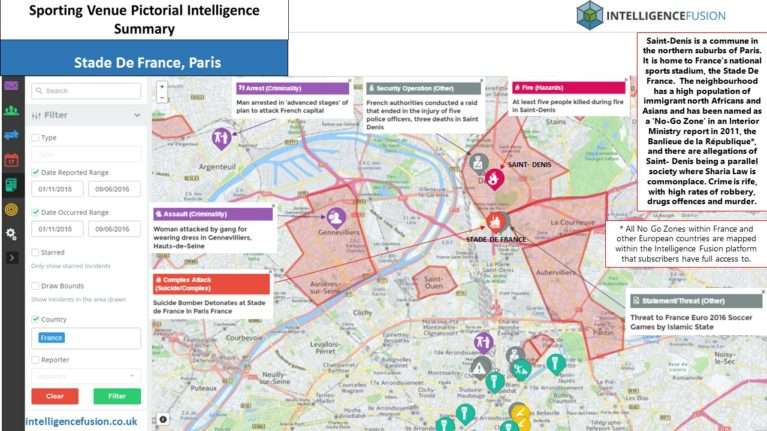 Overview: The Stade De France is the national stadium of France, situated just north of Paris in the commune of Saint-Denis. Its seating capacity of 81,338 makes it the fifth-largest stadium in Europe. The stadium is used by both the France national football team and French rugby union team for international competition. The stadium is also used for music concerts and other sporting events. France remains under a state of emergency after the November 2015 attacks in Paris. Paris during the tournament will have a dedicated security force of at least 13,000 to patrol two fan zones and two stadiums, with the countryâs state of emergency law allowing police extra powers to conduct searches. Ongoing unrest and strikes in Paris may cause problems for supporters heading to the Stade De France on 10 June. The national SNCF rail company said that one of the two main overland train lines linking the Stade De France in the capitalâs northern suburbs to the city centre had two-thirds of its services cancelled because of strikes on 9 June, while 6 out of 10 services were not running on the other line. The company is working on an alternative plan, while an underground Metro line to the stadium will have extra trains running. Further full details and incident analysis on the protests and strikes affecting France can be accessed on the Intelligence Fusion subscription only platform.
Back to Reports & Resources