Russian invasion of the Baltics: perceptions, capabilities and likelihood

Key Judgements
It is a realistic probability that Russia could launch an attack on the Baltic States in the short-medium term. The attack would be disruptive and would destabilise the entire region, but Moscow is unlikely to achieve a quick success.There is a realistic probability that, in the event of invasion, both sides will threaten the use of nuclear weapons.Baltic states are highly unlikely to face the invasion on their own.Currently, NATO forces are unlikely to effectively counter a Russian aggression.Geostrategic challenges, such as the Kaliningrad bottleneck, are likely to further affect the effectiveness of NATO forces.
Balticsâ perceptions
The possibility of a Russian invasion is strongly feared by the Baltics. Earlier this year, the Lithuanian Defence Minister Karoblis has defined âterrifyingâ the risk of invasion. This is based on a misinformation campaign launched by Moscow, which largely resembled the one utilised in Ukraine. The rhetoric campaign was propagated by Russian media such as government-controlled âSputnikâ and TV channels, as well as politicians, who resorted to historical pretexts such as calling into question Vilnius as capital due to the city being part of Poland between the first and the second world wars. 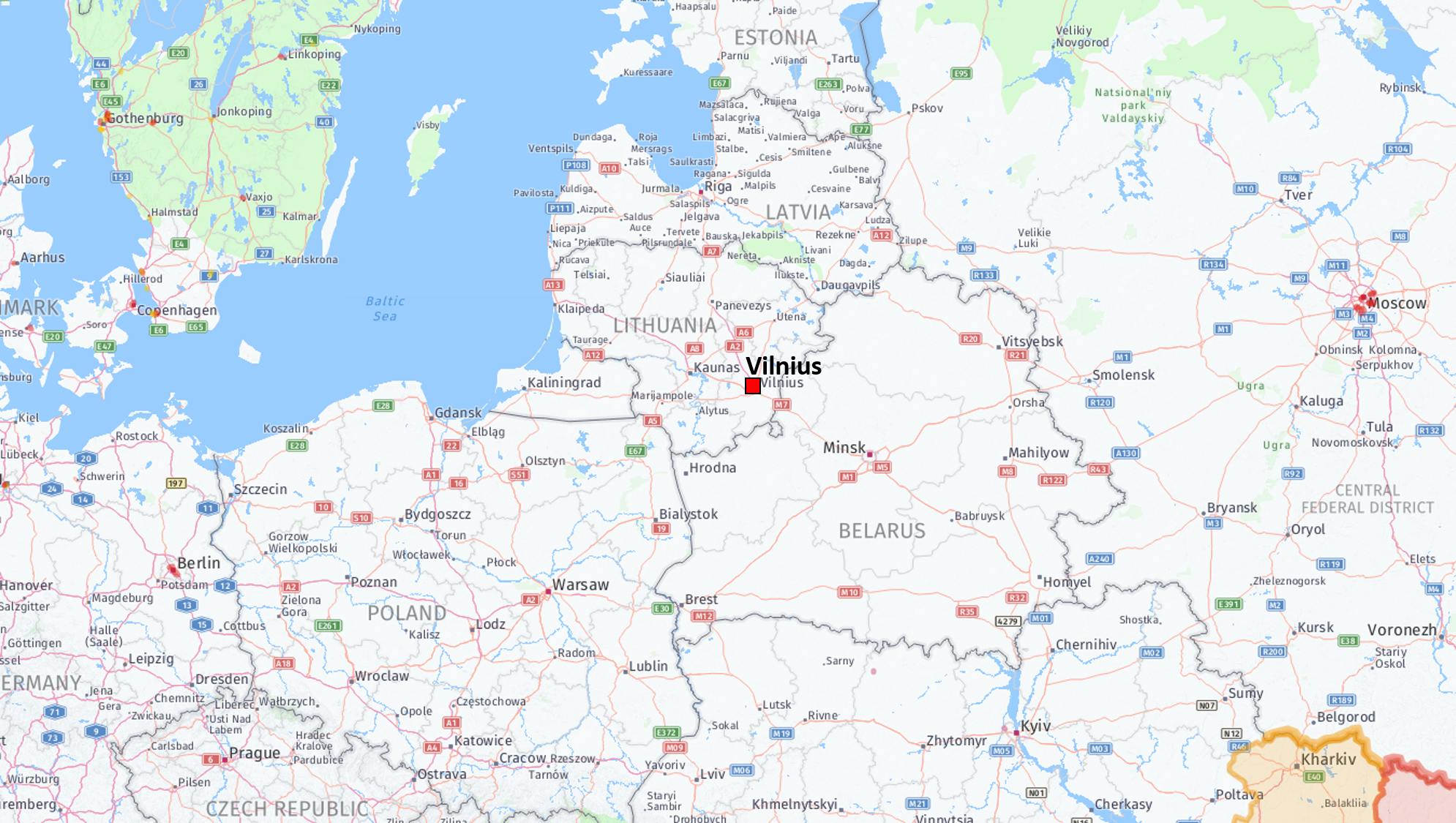 Location of Vilnius, Lithuania.
The Lithuanian intelligence agencies have been constantly monitoring the disinformation campaign perpetrated by Moscow. Intelligence reports have been received regarding Russian politiciansâ claiming that KlaipÄda, the third largest city of the country, should not belong to Lithuania because âit was the gift of Stalin after the second world war.â Challenging Lithuaniaâs right to exist, other politicians called for a dismemberment of Lithuania into two states, one annexed to Belarus, the other to Russia. Lithuanians fears the possibility that such narrative efforts are aimed at de-legitimising the Baltic country in preparation for military operations. 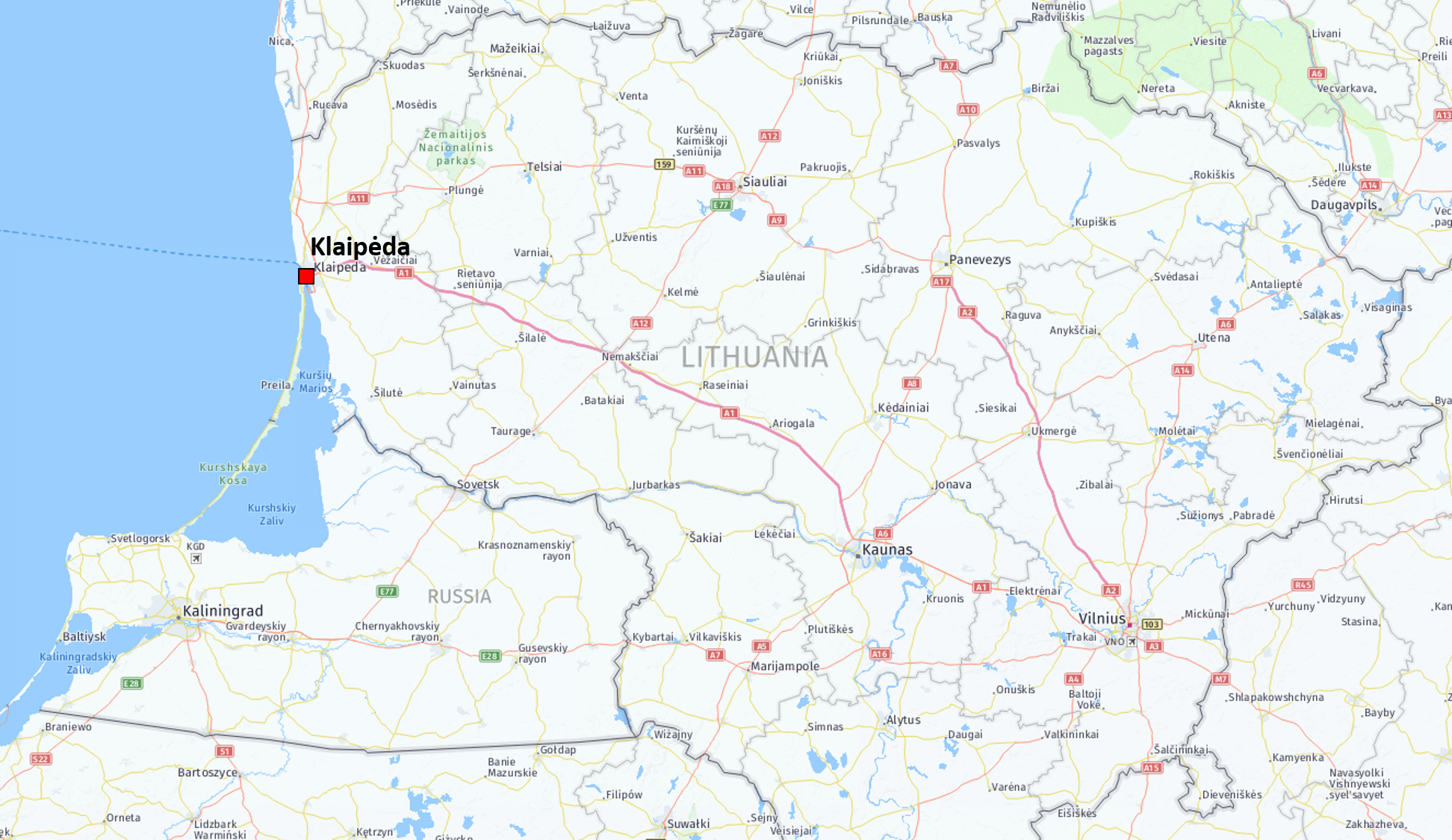 Location of Klaipeda, Lithuania.
The nature of the current Russian misinformation campaign upsets the Baltics due to the parallels with Ukraine. The Lithuanian militaryâs department of strategic communication has been looking at the Ukraine example, noticing that before turning into a kinetic operation â i.e. a military operation conducted with conventional weapons â Russiaâs strategy relied on a thorough (mis)information campaign (non-kinetic operations) aimed at destabilising the country. Also of note was the reintroduction into the public debate of terms such as âNovorussiaâ (âNew Russiaâ), harking back to the Tsarist era. This occurrence was not regarded as alarming when it first appeared in 2003, but makes much more sense in hindsight.
Furthermore, there is record of Facebook pages in support of imaginary âstateletsâ within the Baltic area, which recall similar web accounts inciting the separation of the eastern Ukraineâs Donbass and Luhansk regions. According to a Lithuanian officer, these online activities, although absurd, violent and anti-historical, can effectively take root in peopleâs minds. As it happened in Ukraine, the presence of Russian communities on Baltic soil suggests Russia could leverage minorities to justify an invasion aimed at reuniting them to the homeland.
The alarm has led the Baltics to be prepared for any scenario over the next two years. Lithuania, for instance, has raised its defence budget by 32% after Russiaâs annexation of Crimea. The Lithuanian Defence Ministry had previously released a âhow to survive an invasionâ manual, which invited the Lithuanians to resist foreign occupation through demonstrations and strikes, online organisation and cyber-attacks against the invader. The publication came out after Lithuanian people had expressed the will of developing counterinsurgency tactics, while others had already organised in countryside refuges, on the assumption that an invasion would more likely strike harder the cities than the outskirts. In addition, trainers from the Defence Project, a warfare training group, have refined and increased the military exercises already ongoing on the country, due to Russiaâs proactive offensive rhetoric and the unknown role of the neighbouring Belarus in the event of invasion. The number of volunteers asking to be enrolled in the Lithuanian Army has been so high that the re-established list of proscription needed no draft; rather, there was not room enough for all those who volunteered. 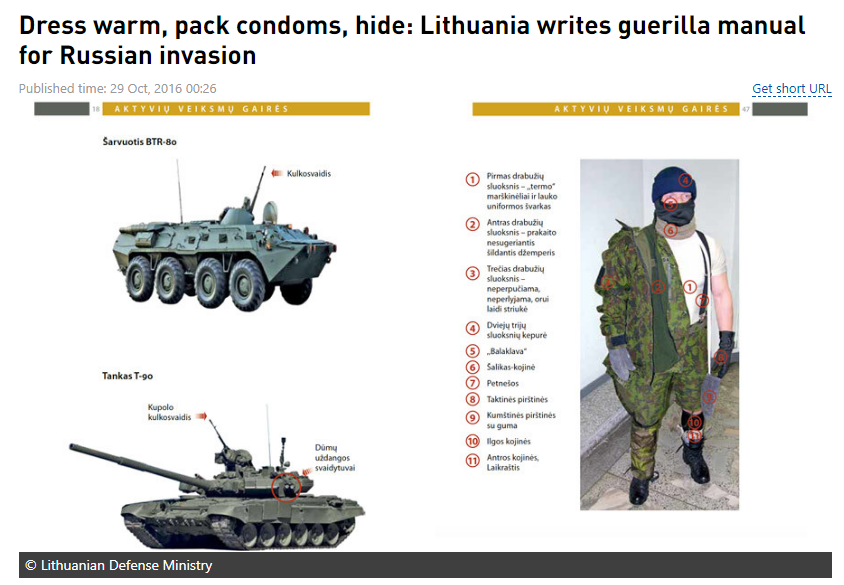 RT)
For its part, Estonia too is strengthening its capabilities. The country has been bolstering the Estonian Defence League, a civilian resistance consisting of thousands of volunteers with ordinary jobs, but serving as an additional militia. This yearâs annual exercise has seen about 13,000 of them training in school gymnasiums, with âweapons for a hypothetical battlefield.â Similarly, Poland, a non-Baltic country but nonetheless profoundly concerned, has established a Territorial Defence Force to train thousands of volunteers, a part of which is likely to be assigned to the defence of the border with the Kaliningrad Oâblast. 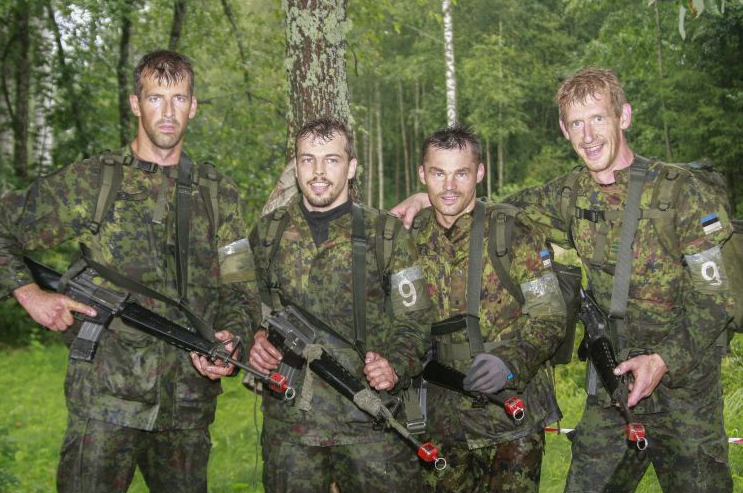 Estonian Defence League troops. (via Kaitseliit)
Although preparing for an invasion, the Baltics could hardly be able to sustain a confrontation on their own. Estonia relies on 5,300 active duty land troops, Latvia on 4,450 active ground troops while Lithuania has 6,000. Overall, the Baltic States can count on 15,750 soldiers combined. These numbers do not include naval and air force personnel, which are anyway relatively small in size, nor reservists and paramilitary â 12,000 for Estonia, 11,300 for Lithuania â which would unlikely be available at once, especially in the event of a surprise attack. And even if they were, they would be outnumbered by the Russian Airborne Troops alone, which totals more than 45,000 men, who are better equipped and trained.
The Baltics hope that making Russia aware of their firm determination to defend the integrity of their land will deter Moscow from a military aggression. However, every option is on the table. As the Lithuanian Sgt Ceponis said, âif we lose the information war today, tomorrow we may be fighting with weapons.â This shows that the attempts to call into question the Balticsâ legitimacy and destabilisation of the region are signals feared as a harbinger of invasion.
The role of Kaliningrad 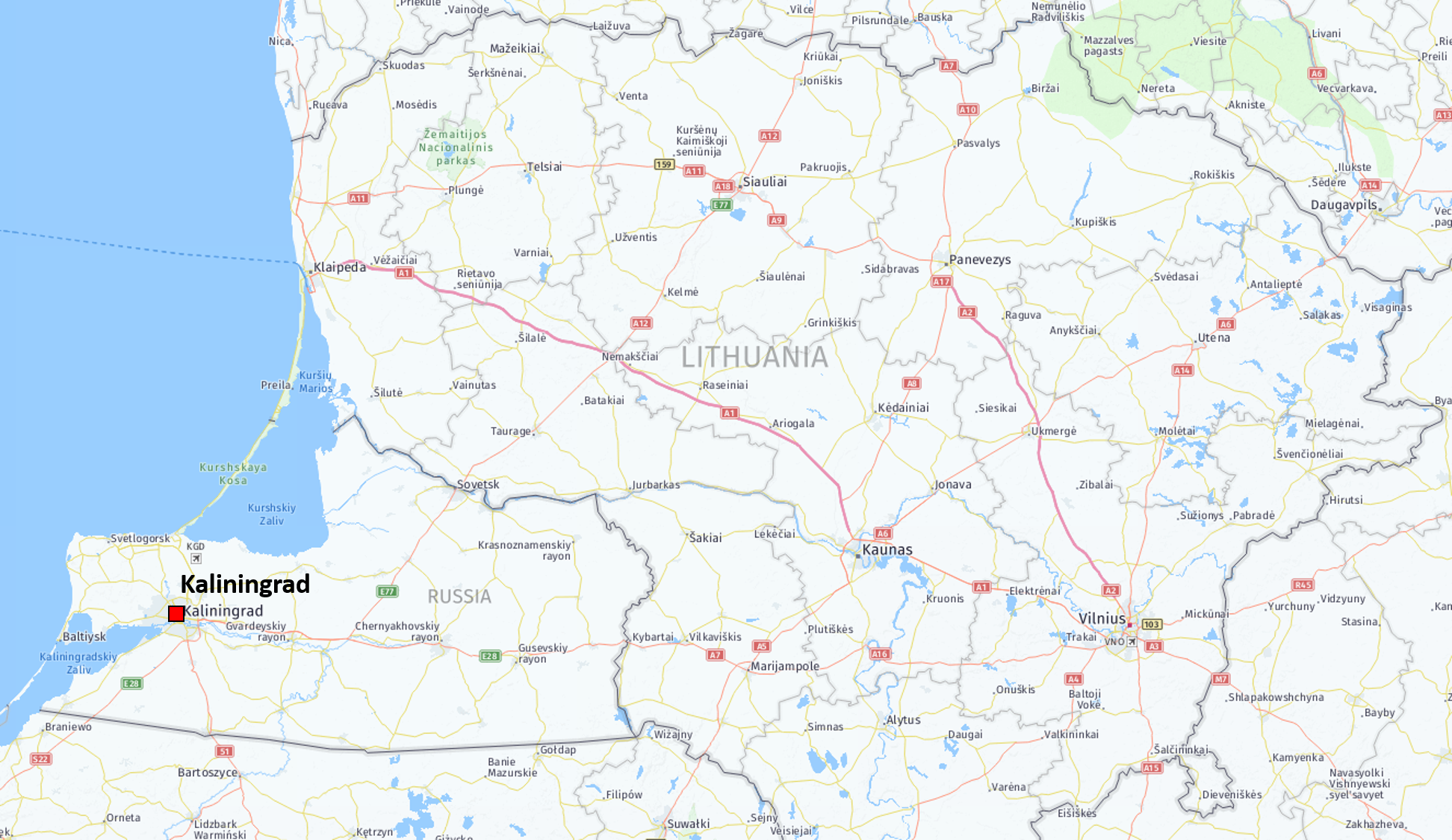 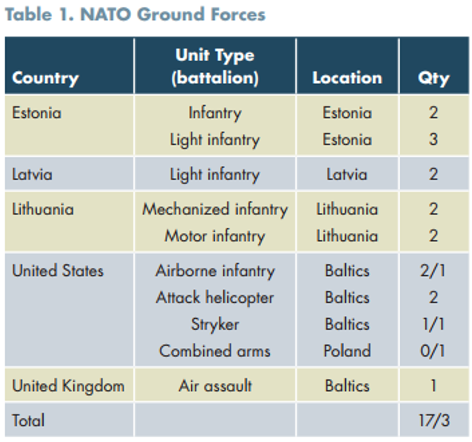 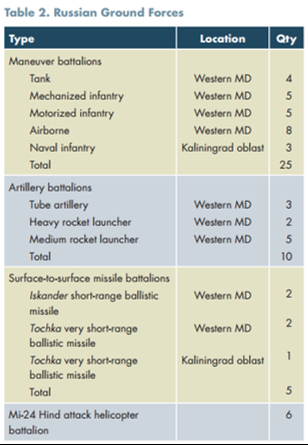 Shlapak, David A. & Johnson, Michael W., âReinforcing Deterrence on NATOâs Eastern Flank. Wargaming the Defense of the Balticsâ, RAND Corporation, 2016.
Overall, although a Russian invasion in the Baltics remains an option on the table, the likelihood of a quick success is considerably low. Russia relies on strong military capabilities, able to penetrate the Baltics within few days, probably few hours. Nonetheless, the impossibility of a total deployment as well as difficulties in the transportation would remarkably prolong the war. Russia remains a threat for the Baltics, but its military effectiveness in the event of invasion should be more thoroughly reassessed by NATO and Western partners.
Challenges for NATO & the US
The impossibility of a full deployment of the Russian military forces must not lead to an underestimation of their potential, especially with regards to the actual effectiveness of a NATO response. The issue is not just whether NATO capabilities would be adequate and able to counter a Russian invasion, but also how to circumvent geostrategic challenges and assessing the likelihood of strong support from the US.
In the event of invasion, there could be three likely options for NATO. NATO forces could build up a counteroffensive, a scenario full of retaliatory risks and entailing the necessity of striking targets. Another way would be resorting to the âmassive retaliationâ doctrine, threatening the use of nuclear weapons â a deterrence tactic that would either lead to âa risk of igniting escalatory spiralâ or the peril of undermining NATO credibility. Alternatively, the West could temporarily concede Russia the control over the territories occupied, opening a new Cold War.
According to a 2016 RAND report, for these scenarios to be realistic, NATO needs to fill the gap of the necessary heavy forces that are currently lacking, to deny Russia a quick victory. On one side, NATO has intensified the size and the quantity of the BALTOPS (Baltic Operations), the annual exercises around the waters of the Baltic Sea. On the other, the correlation of forces is badly disproportionate, in both the quantity (NATO lacks tanks in the field) and the quality (Russiaâs forces are better mechanised and equipped than the Western counterparts), where the greatest gap concerns the limited airpower.
Such disproportion is further aggravated by major geostrategic challenges, of which the hardest is undoubtedly represented by the Suwalki Gap. Named after a nearby Polish town, the Suwalki Gap is a bottleneck-like strip of land between the eastern side of the Russian Kaliningrad Oâblast and the western side of Belarus, a close Russian ally. It would be exactly through this narrow handful of kilometres that NATO ground forces, moving from Poland, should pass. It would be naÃ¯ve not to imagine that Russia already has a plan to exploit such weakness and entrap the NATO forces. 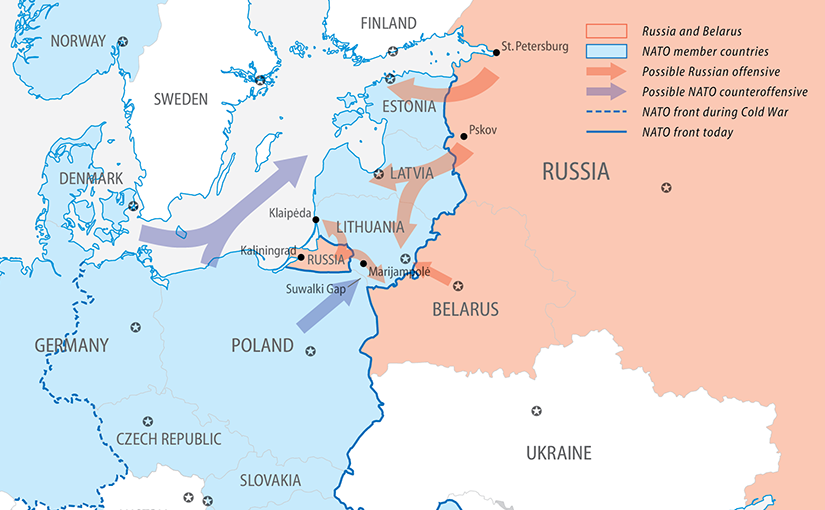 Chang, Felix K., âNATOâs Baltic Defense Challengeâ, FPRI, http://www.fpri.org/2017/06/natos-baltic-defense-challenge/, June 2017.
Another significant geostrategic challenge involves possible attack from the sea. The lack of NATO adequate heavy forces, in fact, also concerns the sea military capabilities. The great advantage of having the Baltic fleet already stationed in Kaliningrad could be ostensibly exploited by Moscow, blocking the access to the Baltic ports and forcing NATO to launch amphibious attacks. Yet, NATO capabilities to launch such a type of attack, although largely bolstered and hardly drilled with the BALTOPS, would still be insufficient to sustain the necessary pressure on Russian forces in the medium term.
Finally, the sense of vulnerability perceived in the Baltics is certainly deepened by a feeling of confusion within the Western allies, and the ambivalence of the US regarding the event of invasion adds further turmoil. Although Trump declared that he would support Baltics only if they fulfilled all their NATO duties, the administration has recently corrected the stance with the visit of Pence in Estonia at the end of July, when the US VP assured the Baltic leaders on the US support, were the invasion to happen. Admittedly, NATO is strongly dependent on the US support to be efficient and effective in a counteroffensive scenario. In this regard, the uncertain position of Trump over the US support to the Baltics is more likely to be interpreted as an outlandish statement, although it actually shocked the EU leaders.
Conclusions
Based on the findings and the ACH provided below, there is a realistic potential that Russia may launch an attack on the Baltic states. Based on precedents, the misinformation campaign against the Balticsâ integrity and right to exist is likely to prepare the ground for military operations. The increasing deployment of military capabilities â among which nuclear warheads â in the crucial Kaliningrad region has considerably raised concerns over the possibility of a Russian aggression. However, while Russia does represent a serious threat for Estonia, Latvia and Lithuania, its military capabilities are unlikely to guarantee Moscow a quick success. Much, of course, will depend on the coordination and strengthening of the NATO forces, which are currently unlikely to effectively counter a Russian invasion and largely dependent on the US support. 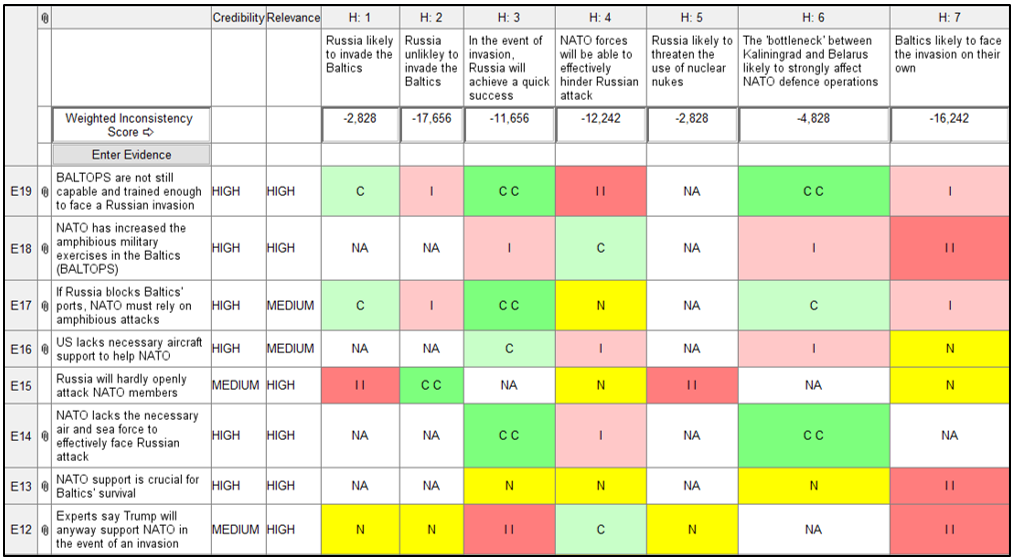 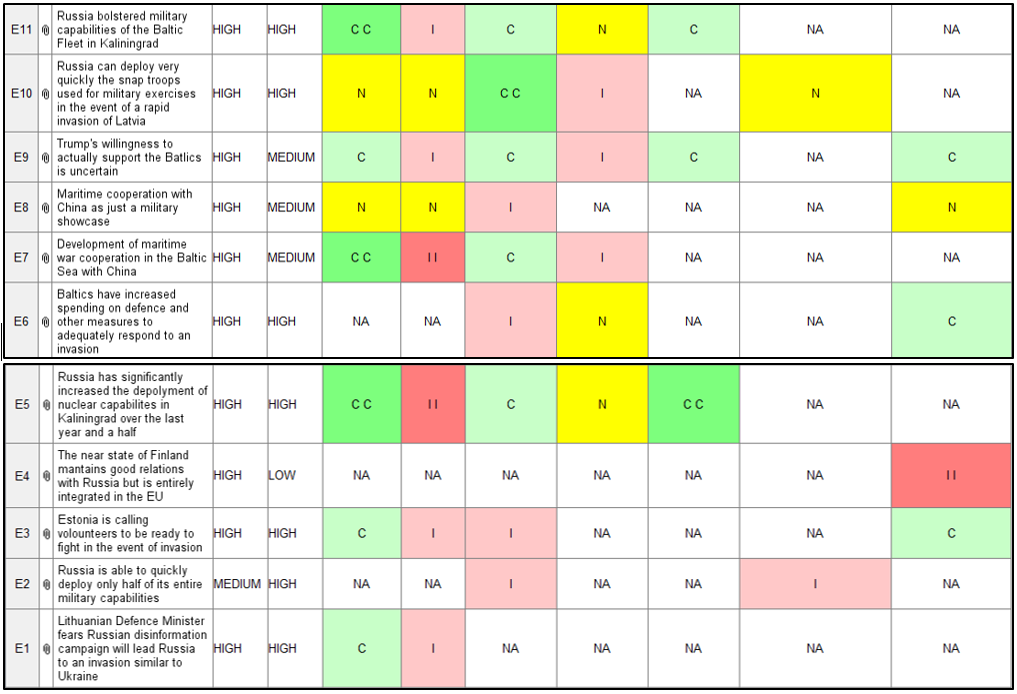