Overview
As in many other countries of Europe today, the right-wing extremist scene of Slovakia has seen substantial growth in popularity; coupling domestic social problems with external factors such as the conflict in Ukraine, the migrant crisis, a growing trend of Euroscepticism among others has made many people turn to radical political parties promising easy, although generally inapplicable solutions.
The Slovak right-wing extremist scene started forming shortly after the country’s independence in 1993. Currently, it is the dominant form of political extremism in the country with other political movements being deeply marginalised and under-represented.
In general, the scene is dominated by two right-wing ideologies: neo-Nazism (either invoking general neo-Nazi themes of racial supremacy, xenophobia, anti-Semitism, or revering Slovakia-specific Nazism, i.e. pertaining to the country’s WWII history of the so-called Slovak State (a clerical-fascist Nazi German satellite state) and its president, Catholic priest Jozef Tiso; the ideology here is based on anti-Semitism, anti-Romani sentiments, chauvinism, etc.) and nationalism (either simply Slovak nationalism of various intensities, or pan-Slavic sentiments that call for abandoning of the Western orientation of the country in favour of a more East-oriented policies, often being drastically pro-Russian). These ideologies often mix in specific groups and may vary among individual members of the groups.
Furthermore, the Slovak right-wing scene can also be classified by the position of the groups in relation to the current political system and the groups’ character.
There are 4 broader clusters:
Registered, systemic parties represented by the largest actor, a nationalistic/neo-Nazi party Äudova¡ Strana Naa¡e Slovensko (ÄSNS; People’s Party Our Slovakia) and recently also by nationalistic Sloven
These include registered, but less political entities, such as nationalistic, anti-Nazi but pro-Russian paramilitary group Slovenska branci (SB; Slovak Recruits) and nationalistic, pro-Russian Asocia¡cia slovenskach vojakov (ASV; Association of Slovak Soldiers) composed of professional soldiers of the Slovak Armed Forces.
Unregistered groups bordering on illegality the main representative being a neo-Nazi paramilitary movement Vzdor Kysuce (VK; Resistance Kysuce)football hooligans and rowdies.
However, as not all of those clusters represent an equally large security threat, this report will focus only on the largest, most coordinated and most dangerous of them.
While there were attempts to unite separate elements of the extremist scene, internal ambitions, different political strategies and personal conflicts among their leaders made this impossible; currently, the scene is fragmented along ideological and systemic lines as mentioned above. 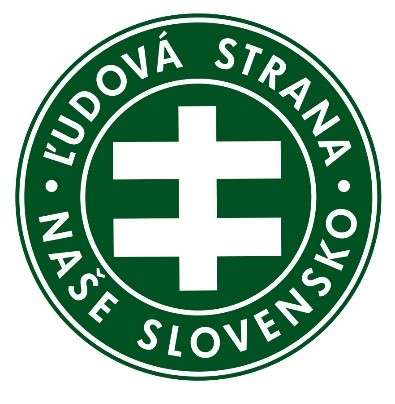 Ľudová strana Naše Slovensko (People’s Party Our Slovakia; LSNS) is a far-right, neo-Nazi political party led by Marian Kotleba, a central figure of the Slovak right-wing scene.
Established in 2011, LSNS is Kotleba’s second political party, as its predecessor, Slovenská Pospolitost (Slovak Togetherness; SP) was dissolved in 2006 by the Supreme Court when its activities were found anti-constitutional. Although headquartered in the BanskÃ¡ Bystrica region (where Kotleba is the governor of the region), the party maintains several regional bureaus and has grown from a marginal party to a parliamentary one, winning 10% of the parliament seats in the 2016 elections (gaining 8.04% of all votes).
IDEOLOGY: Neo-Nazism, Slovak nationalism, anti-Semitism, anti-immigration, anti-Romani stances. Opposes membership in the EU and NATO. Glorifies the war-time cleric-fascist Slovak State (1939-1945) and its president, Jozef Tiso and propagates xenophobia. The party is strongly against liberal democracy, globalism and West-oriented foreign policy.
GOALS: taking control of the current liberal-democratic political system and installing an authoritarian one in its stead; leaving the EU and NATO; attaining economical autocracy and political neutrality
LEADERSHIP: Marian Kotleba (chairman of the party), Rastislav Schlosa¡r, Ja¡n Kecskas, Peter Krupa (deputy chairmen)
GROUP SIZE: 14 MPs, some thousands of party members, over 200 000 supporters (based on the amount of votes received in 2016 elections)
LOCATIONS: BanskÃ¡ Bystrica (main bastion; support predominantly in the central/eastern Slovakia)
ALLIANCES: none
TACTICS: political engagement, marches, protests, online populist propaganda, illegal train patrols, local public help (donations, subsidies); recently the group started to distance itself from the extremist mainstream as it became a systemic actor
FUNDING: parliamentary funding, private donations, membership fees, partially also merchandise
OPPOSITION: personal conflicts with SHO due to different political strategies; after becoming a systemic, parliamentary party conflicts with other right-wing groups appeared; anti-fascist/extremist groups
WEBSITE: http://www.naseslovensko.net/
SOCIAL MEDIA:  Facebook 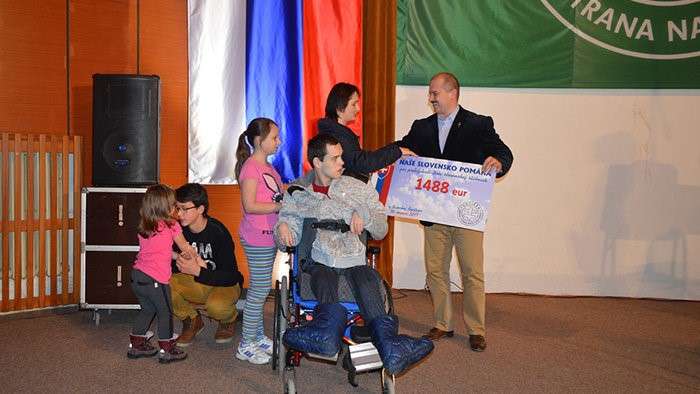 LSNS leader and MP Marian Kotleba handing over a 1488 cheque to a family of a handicapped man. The amount is a combination of two neo-Nazi numbers; 14 refers to a 14-word white supremacist slogan: “We must secure the existence of our people and a future for white children”, while 88 refers to the Nazi salute “Heil Hitler” (with H being the 8th letter of the alphabet). 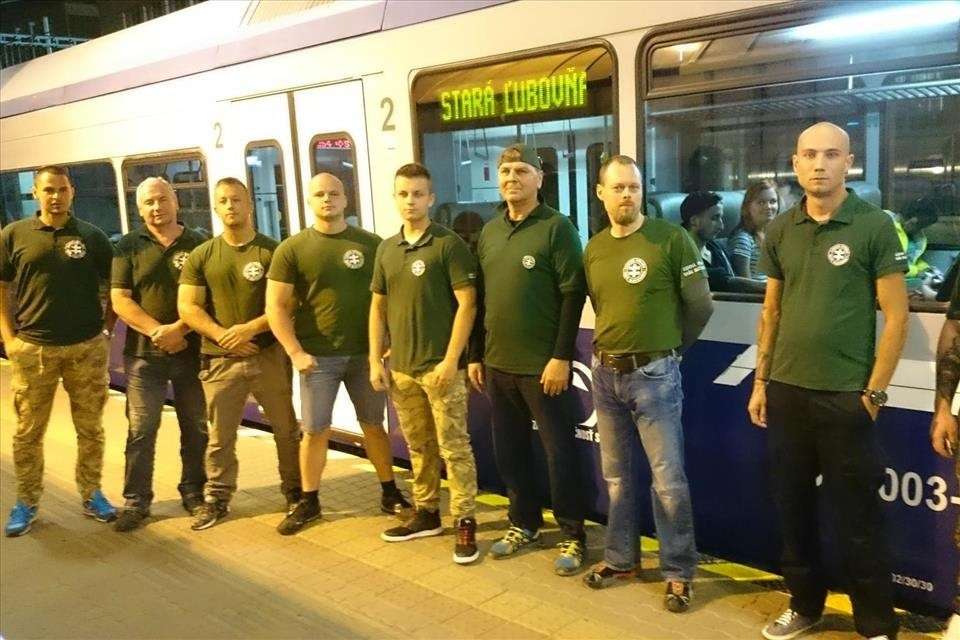 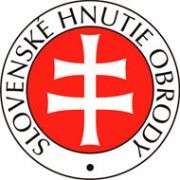 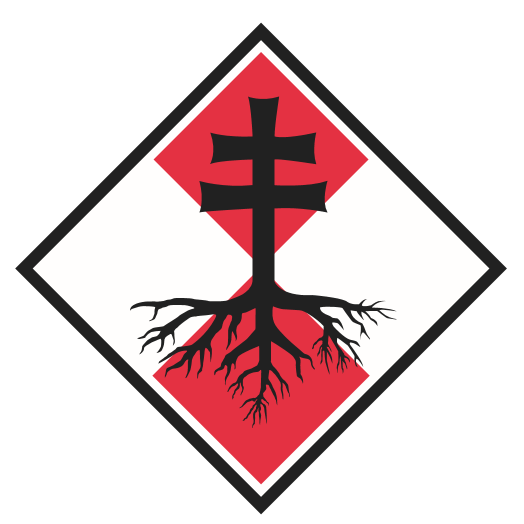 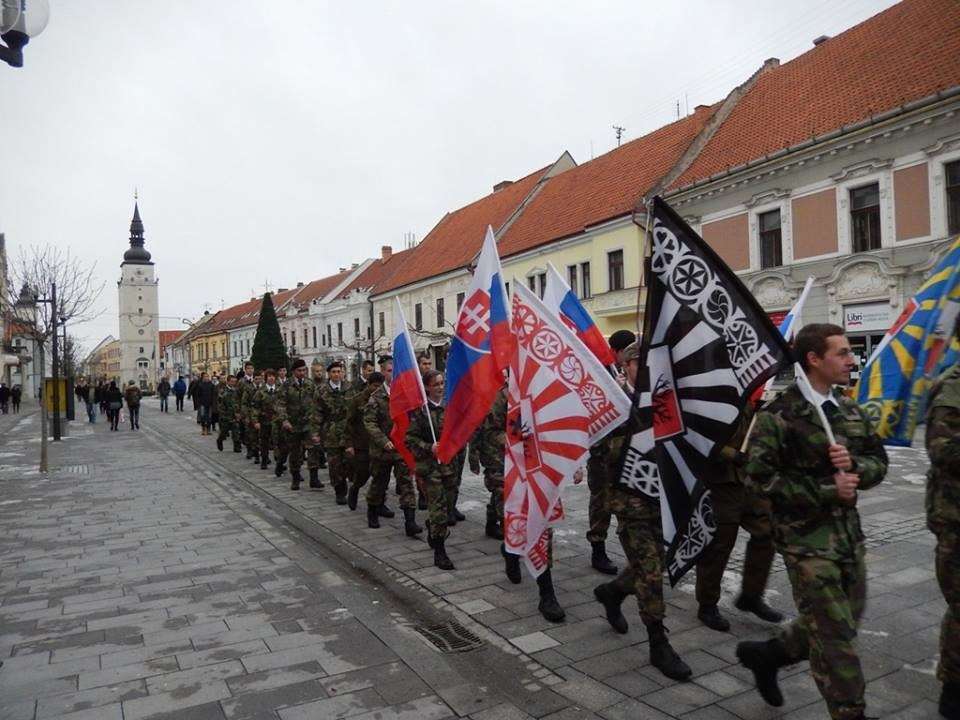 Divisions of SlovenskÃ­ Branci marching through the city of Trnava, 7.1. 2017. 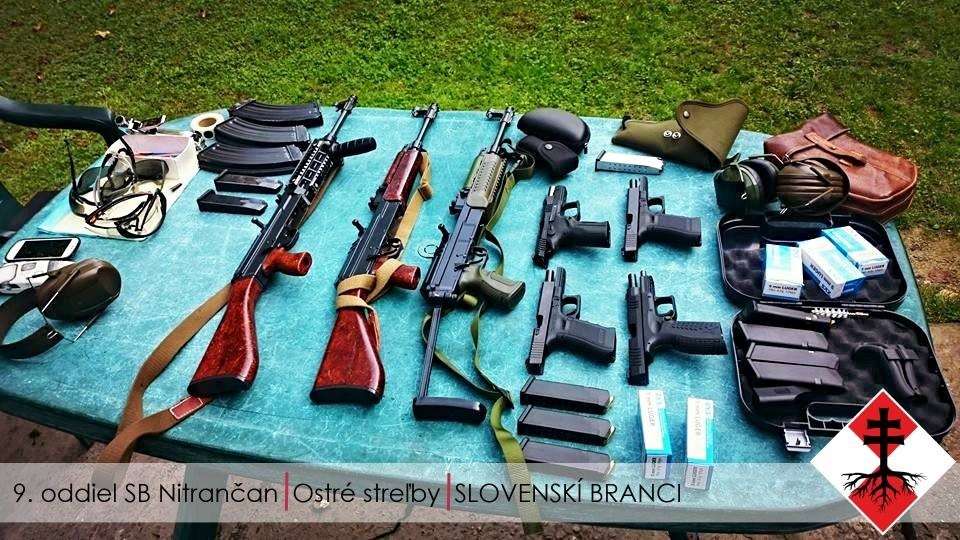 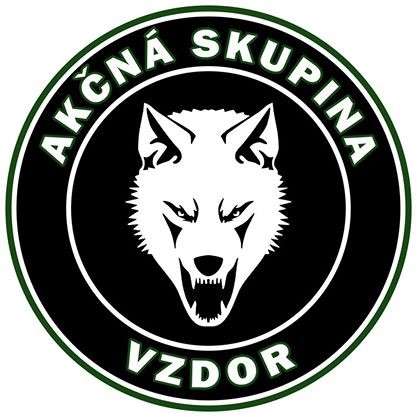 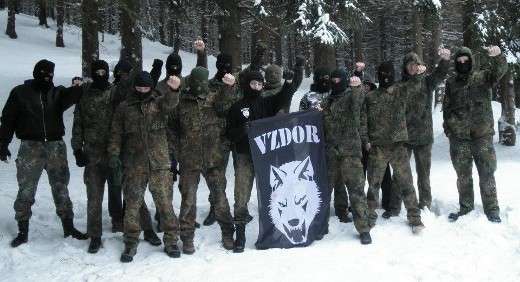 Group photo of AkÄnÃ¡ Skupina Vzdor Kysuce during one of their training.
Video of the groupâs exercises in 2011. 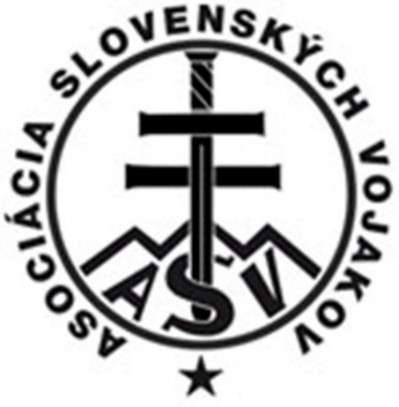 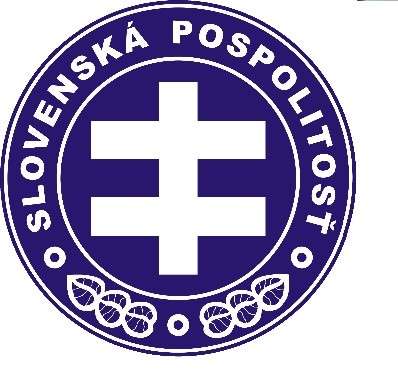 SlovenskÃ¡ PospolitosÅ¥ (Slovak Togetherness; SP) is a Slovak far-right-oriented ultra-nationalist civic association. The group was founded by the current Ä½SNS leader, MariÃ¡n Kotleba, as a political party, but in 2006 it was dissolved by the Supreme Court which found the partyâs actions anti-constitutional. After that, it continued to operate as a civic movement. In 2008, Ministry of Interior banned the organisation; however, the ruling was later reverted and SP remains a legal civic association.The group is in essence a neo-Nazi, authoritarian and nationalistic movement; as it is the Ä½SNSâs predecessor, they share many of their ideological stances (although being a much smaller, extra-systemic actor allows the SP to adopt more radical positions that Ä½SNS was forced to abandon). The group maintains good relations with other nationalistic and anti-systemic groups in the CEE region.
IDEOLOGY â Slovak ultra-nationalism, pan-Slavic (but not pro-Russian/pro-Putin, just the opposite) and anti-immigration stances. Anti-EU, anti-NATO, anti-Semitic, anti-Romani.
GOALS â overthrowing the current liberal-democratic political system and installing an authoritarian one; leaving the EU and NATO;
LEADERSHIP â formerly MariÃ¡n Kotleba, currently Jakub Å krabÃ¡k
GROUP SIZE â several hundreds of core members; 8 500 fans on their Facebook page
LOCATIONS â Liptov region; generally northern/eastern portion of the country
ALLIANCES â Vzdor Kysuce (VK), Azov (UA; recently attended the âIntermarumâ conference in Kiev), Magyar Nemzeti Arcvonal (HU);
TACTICS â demonstrations and public protests, small-scale public assistance projects
FUNDING â online merchandise sale, private donations
OPPOSITION â in opposition of Ä½SNS for abandoning the âgenuine radicalâ approach; anti-fascist/extremist groups
WEBSITE â https://pospolitost.wordpress.com/
SOCIAL MEDIA: â¢ Facebook: https://www.facebook.com/SlovenskaPospolitost1995/ â¢ Twitter: – â¢ YouTube: https://www.youtube.com/user/ESPEmedia/feed 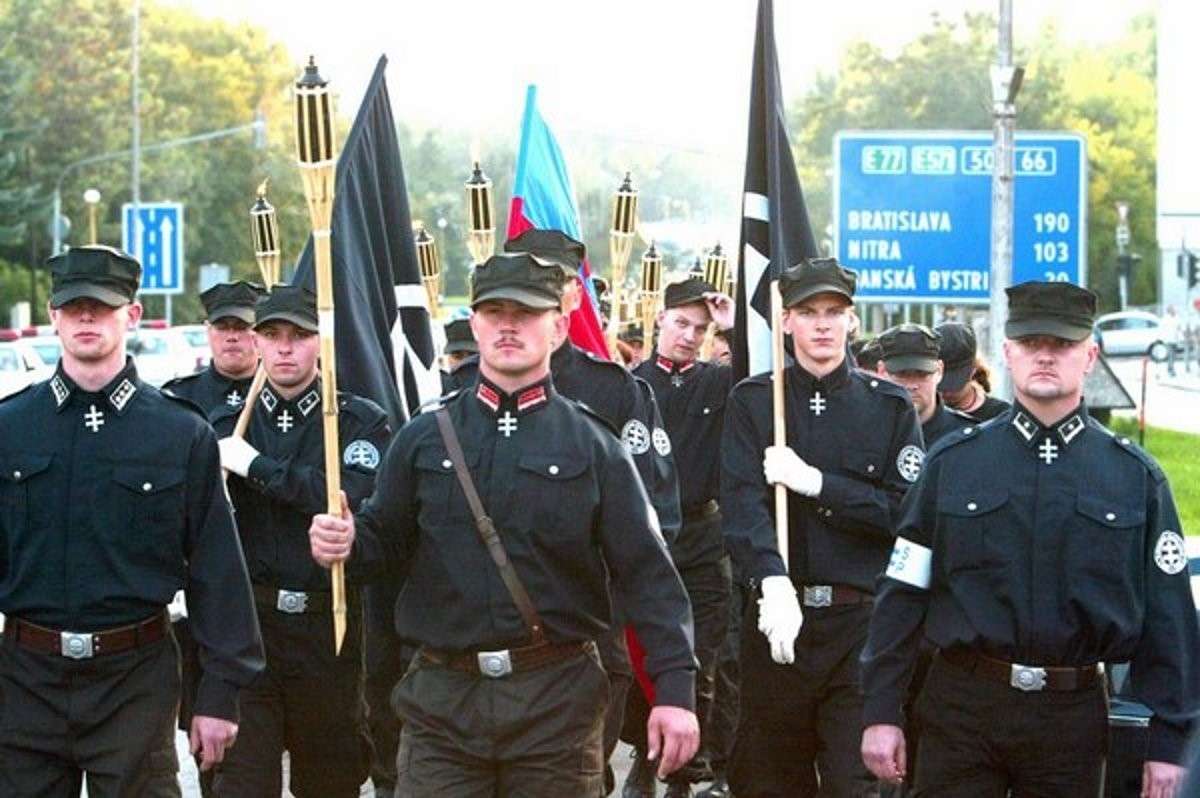 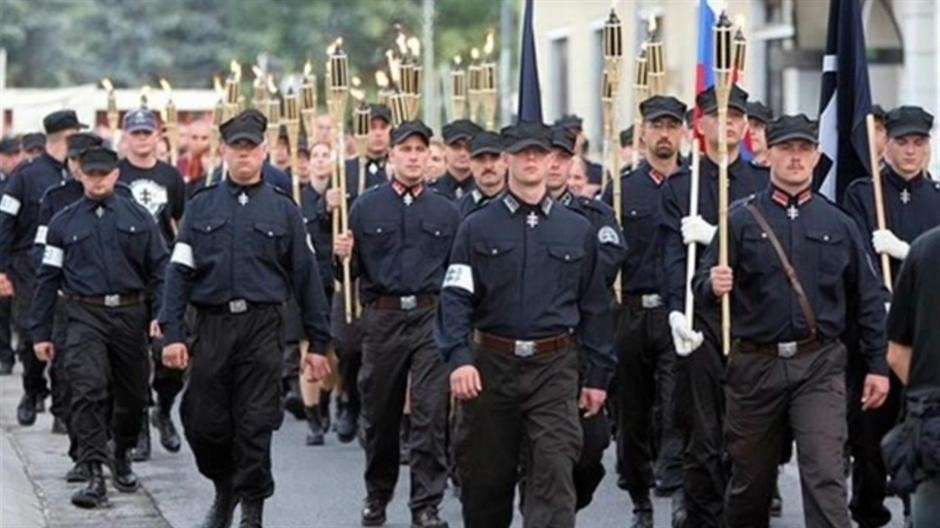