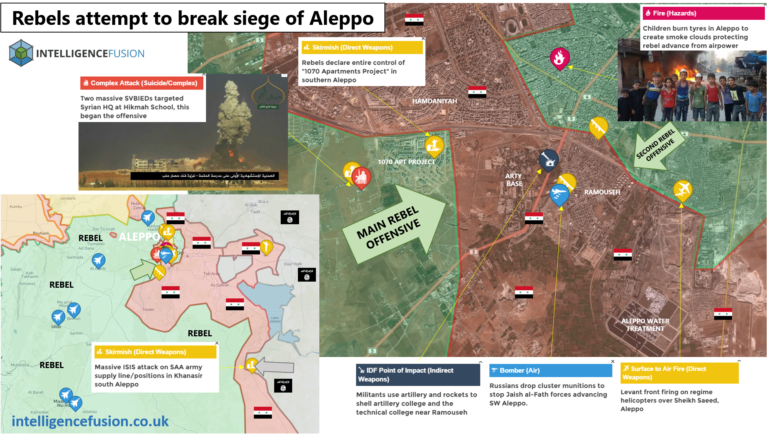 A rebel force of 5000 militants have begun an offensive to break the Syrian force encirclement of Aleppo. The rebel groups taking part in the offensive include:
Jabhat Fateh al Sham (formerly al Nusra Front).Suqir al Jabal.Ahrar al Sham.Faylaq al Sham.Ajnad al Sham.Liwa al Haq.Jaysh al Sunnah.Turkistan Islamic Party (Uyghur jihadists from China).
The offensive reportedly began with a double suicide vehicle bomb attack targeting Hikmah School, a Syrian force headquarters. The offensive quickly gained ground with Syrian forces withdrawing, resulting in the taking of the 1070 Apartment Project area of southwest Aleppo. As the main rebel offensive pushed from the southwest, a secondary offensive targeted the Syrian force corridor in the areas of Ramouseh, while indirect fire targeted the artillery base. In a significantly coordinated attack, with the participation of numerous rebel groups, part of the strategy aimed to neutralise the threat from Russian and Syrian airpower. Children assisted by burning tyres in Aleppo to create thick black plumes of smoke, while surface to air fire was reported targeting helicopters supporting Syrian forces. Islamic State either acting through coordination or seizing an opportunity used the Aleppo offensive to target Syrian supply lines in Khanasir.
COMMENT: Just as Syrian forces had managed to encircle Aleppo following the collapse of rebel groups in the area, this offensive was created by bringing in rebel reinforcements from across Syria. This offensive could be a defining moment of the war. If rebels break the siege, cutting the supply lines to Syrian forces from the south, suddenly the situation has flipped and Syrian forces are now encircled in Aleppo. However, with rebel forces being brought together from across Syria, this has reduced their combat effectiveness elsewhere, meaning Syrian forces could use this offensive to make gains in places like Latakia for example. If Syrian forces can leverage Russian airpower to effectively target rebel forces and beat back this offensive, this could be a turning point in the war for Assadâs forces and put the rebels further on the back foot and Aleppo firmly back in Syrian forces control.
Back to Reports & Resources