Qatar and the diplomatic crisis in the Gulf

On June 5th, the United Arab Emirates (UAE), Saudi Arabia, Bahrain, Egypt and Yemen cut diplomatic ties with Qatar and closed all land, sea and air routes into the tiny Gulf kingdom. These countries also ordered Qatari diplomats to leave within 48 hours and gave Qatari citizens within their borders 14 days to depart.
Though not entirely unprecedented- in 2014 Saudi Arabia, Bahrain and the UAE withdrew their ambassadors from Qatar for a period of nine months- this coordinated action marks a dramatic escalation in a long running disagreement between countries in the Gulf Cooperation Council (GCC). By closing Qatarâs only land border, Saudi Arabia has seriously jeopardised the flow of goods and people in and out of Qatar and gained enormous political leverage. As much as 40% of Qatarâs food supply comes through this border crossing and the immediate aftermath of the announcement saw a run on Dohaâs grocery stores by panicked residents.
Background
This recent dispute began on May 23rd, when comments appeared on the website of the Qatari state news agency attributed to the Qatari Emir. These comments expressed support for Israel, Iran and Hamas as well as predicting Donald Trump would not last long as president. Qatar claimed the statements were entirely false and the result of a cyber-attack on its state broadcaster. These denials were ignored by Saudi and Emirati media outlets however which began a heavy handed campaign of criticism directed at Qatar and its emir.
On June 3rd, a small number of media outlets including Al-Jazeera ran with a story covering emails hacked from an email account allegedly belonging to the UAE Ambassador to the US, Yousef Al-Otaiba. The emails, which have not been verified, appeared to show Otaiba working in coordination with a pro-Israeli think tank to launch a campaign against Iran. Otaibia is an extremely well known and influential figure in Washington DC. Though it is well known that the UAE maintains low key, friendly diplomatic and business relations with Israel, such a high level of coordination if true, would be embarrassing for the Emirati leadership.

Ambassador Yousef Al Otaiba
A mere two days after the alleged Otaiba emails were leaked, the GCC countries in question made their move against Qatar, accusing it of destabilising the region with its support for Islamist groups. Since 1995, when Sheikh Hamad bin Khalifa al Thani seized power from his father in a bloodless coup, Qatar has pursued its own foreign policy agenda. This agenda is often in direct conflict with those of its neighbours Saudi Arabia and the UAE, and particularly with regard to Iran and the Muslim Brotherhood. The UAE leadership is virulently anti-Muslim Brotherhood, viewing the Islamist political group as a threat to its own brand of Islamic leadership. Qatar however views the Brotherhood as an ally and a useful political vehicle for advancing its own influence and agenda in the region. Qatarâs support of the Muslim Brotherhood, as well as its funding of broadcaster Al-Jazeera, often viewed in the Gulf as offering a sympathetic platform for Brotherhood leaders, have long been sources of tension.
Sheikh Hamad abdicated in 2013 in favour of his son, the current Emir, Sheikh Tamim. Five months into Tamimâs rule, Saudi and Emirati leaders were angered by reports Qatar was allowing members of the Egyptian branch of the Muslim Brotherhood to regroup in Doha following the ousting of President Morsi and the institution of military rule. Sheikh Tamim was summoned to Riyadh and given an ultimatum to âchange Qatarâs ways and bring the country in line with the rest of the GCC with regards to regional issues.â Tamim was also asked to sign an additional security agreement, guaranteeing non-interference in the internal affairs of any other GCC state. The 2014 diplomatic spat was due to a belief by Saudi Arabia, the UAE and Bahrain that Qatar was not upholding this agreement.
Tension was again stirred in recent months by a perception among GCC member states that Qatar was continuing to provide support to Islamist groups and furthermore by a deal struck to release 26 Qatari royals kidnapped while falcon hunting in southern Iraq. Qatar negotiated a complicated deal to secure their release, involving a ransom payment worth millions of dollars to an Iranian backed Shia militia group and a population swap in four besieged Syrian villages. Though recent reports of $1 billion ransom seem exaggerated, there is no doubt the ransom provided was substantial and that Saudi and the UAE were angry at Qatar indirectly providing funding for Shia militias in Iraq and Syria. 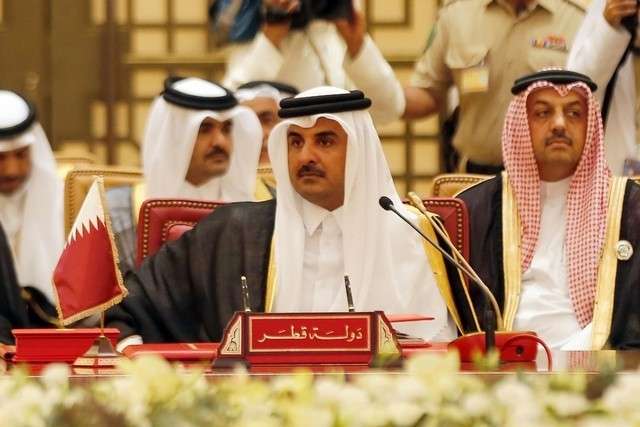 Emir Tamim
US Policy in the Arabian Gulf
Though rooted in almost two decades of political differences, recent events were a direct result of President Trumpâs visit to Saudi Arabia last month.
With the advent of Trump to the US Presidency, the UAE and Saudi Arabia have found their foreign policy agenda â which views both Islamist political groups and Iran as major regional threats- endorsed by the worldâs super power.
While President Obama sought to enhance his engagement with the GCC as a whole and pursued a policy of rapprochement with Iran, President Trump favours a much harder line on Iran and has forcefully focused on Saudi Arabia and the UAE as twin pillars of his regional approach. This marked policy departure was made clear in the most undiplomatic of ways when the Trump administration cancelled two separate meetings with Omani officials during Trumps visit to Saudi Arabia. Thus Oman became the only GCC country not to have a personal meeting with a member of the US administration. As Oman had been the key diplomatic partner engaged in the US-Iran nuclear agreement just two years previously, the message was clear: the current US administration will be taking a harder line on Gulf politics, with particular regard to Iran.
That same hard line seems to extend to Qatar, despite it being an important strategic ally for the US. On Tuesday, President Trump appeared to endorse the Saudi/UAE line, taking to Twitter to comment:
âSo good to see the Saudi Arabia visit with the King and 50 countries paying off. They said they would take a hard line on funding extremism and all reference was pointing to Qatar. Perhaps this will be the beginning to the end of terrorism.â
Trump’s comments came only a day after Secretary of State Rex Tillerson called for a mending of ties in the Gulf and said the U.S. would be happy to broker a solution. The Pentagon appeared to distance itself from Trumps comments in a statement saying the US military is grateful for Qatar’s support of US army presence in the country and “enduring commitment to regional security”.
Though Qatar is home to the largest US military base in the region and 10,000 US military personnel, the UAE has also become an increasingly important military US ally. Saudi Arabia is also of course, a long term ally of the US, making this an incredibly delicate situation for the US.
What does this mean for the region?
The end goal of this action by the GCC states in question is unclear. There has been speculation that Saudi Arabia and the UAE are pushing for regime change in Qatar. Though unnamed Emirati and Saudi government sources have been quoted in state news saying a change in âpolicies, not regimeâ is the goal, there has been no public statement to that effect. If anything, the Saudis and Emiratis are taking an increasingly harder line; on June 7th, UAE Attorney-General Hamad Saif al-Shamsi stated that âStrict and firm action will be taken against anyone who shows sympathy or any form of bias towards Qatar, or against anyone who objects to the position of the United Arab Emirates, whether it be through the means of social media, or any type of written, visual or verbal form,” – meaning that an action as simple as a sympathetic tweet towards Qatar could result in an Emirati citizen or resident being jailed for up to fifteen years. 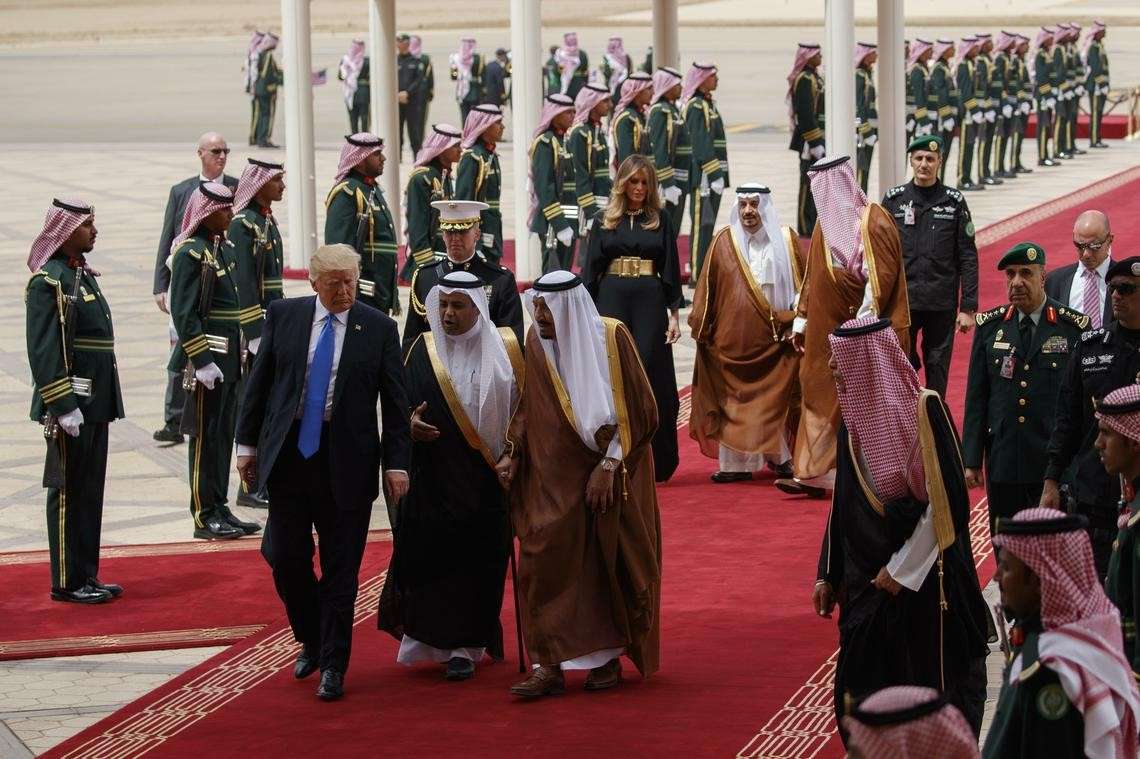 Many commentators have observed that Saudi Arabia is driving this move against Qatar but the role of the UAE should not be discounted. The UAE is playing an increasing role in both regional and global affairs. The Emiratis have consistently taken a much harder line on Islamist groups such as the Muslim Brotherhood than Saudi Arabia. The UAE has also engaged in proxy conflicts with Qatar in Egypt and Libya, with both Gulf states supporting rival groups. It is the UAE that is announcing increasingly hard line measures against Qatar, including the social media penalties above as well as a declaration that expats with Qatar residency will no longer be eligible for visas on arrival. It is then both surprising and interesting to note that the UAE relies on Qatar for 30% of its natural gas needs, which Qatar has continued to supply throughout this crisis.
Going forward, this appears to be an exercise in power by the UAE and Saudi Arabia, keen to bring Qatar in line with âofficialâ GCC policy once and for all. Qatar is not the only GCC country which does not toe the Saudi line; Oman, under the leadership of Sultan Qaboos has traditionally pursued its own independent agenda. However, Oman does not have the same resources as Qatar and though it has avoided participating in GCC security operations such as the Saudi-led coalition war in Yemen, it does not directly contradict Saudi or Emirati actions either, as Qatar has done.
Although Saudi Arabia and the UAE may have Trumpâs tacit support, that is not enough to negate Qatarâs value as a US ally also and the US Pentagon and State Department will be keen for a de-escalation in tension. On Thursday, President Trump appeared to walk back his support for Saudi and the UAE slightly, with an offer to mediate between parties at the White House. With its neighbours essentially leveraging economic sanctions however, Qatar may have no choice but to make a number of substantial reconciliatory gestures in an attempt to rebuild bridges with its GCC counterparts.
Report written by Louise Hogan
Back to Reports & Resources