Violence amongst the prisons of Latin America is not a new phenomenon. Countries in Central and South America have continuously had problems controlling prison populations due to overcrowding, gangs operating inside similarly to the outside, along with corruption among officials which allows gangs to do so unabated.

In South America, countries like Brazil have been particularly hit hard, where large scale massacres have taken place within prisons in recent years due to rivalries between criminal groups such as the Primeiro Comando da Capital (PCC), Comando Vermelho (CV), and the Familia do Norte (FDN).

Most recently, on 26th-27th of May 2019, 55 inmates were killed during prison violence in four prisons around Manaus, in the state of Amazonas. While this level of violence is not currently replicated in other regional countries, they do struggle with their own issues.

Recently, Ecuador has been faced with its own increase in prison related violence, which has led to the deaths of dozens of inmates. On the 16th of May 2019, President Lenin Moreno declared a State of Exception for the country’s prison system, weeks after the department in charge of the prisons asked for the president to authorize an emergency declaration. The objective of the State of Exception is to safeguard prisoners through a variety of measures in order to stop the recent uptick in violence. 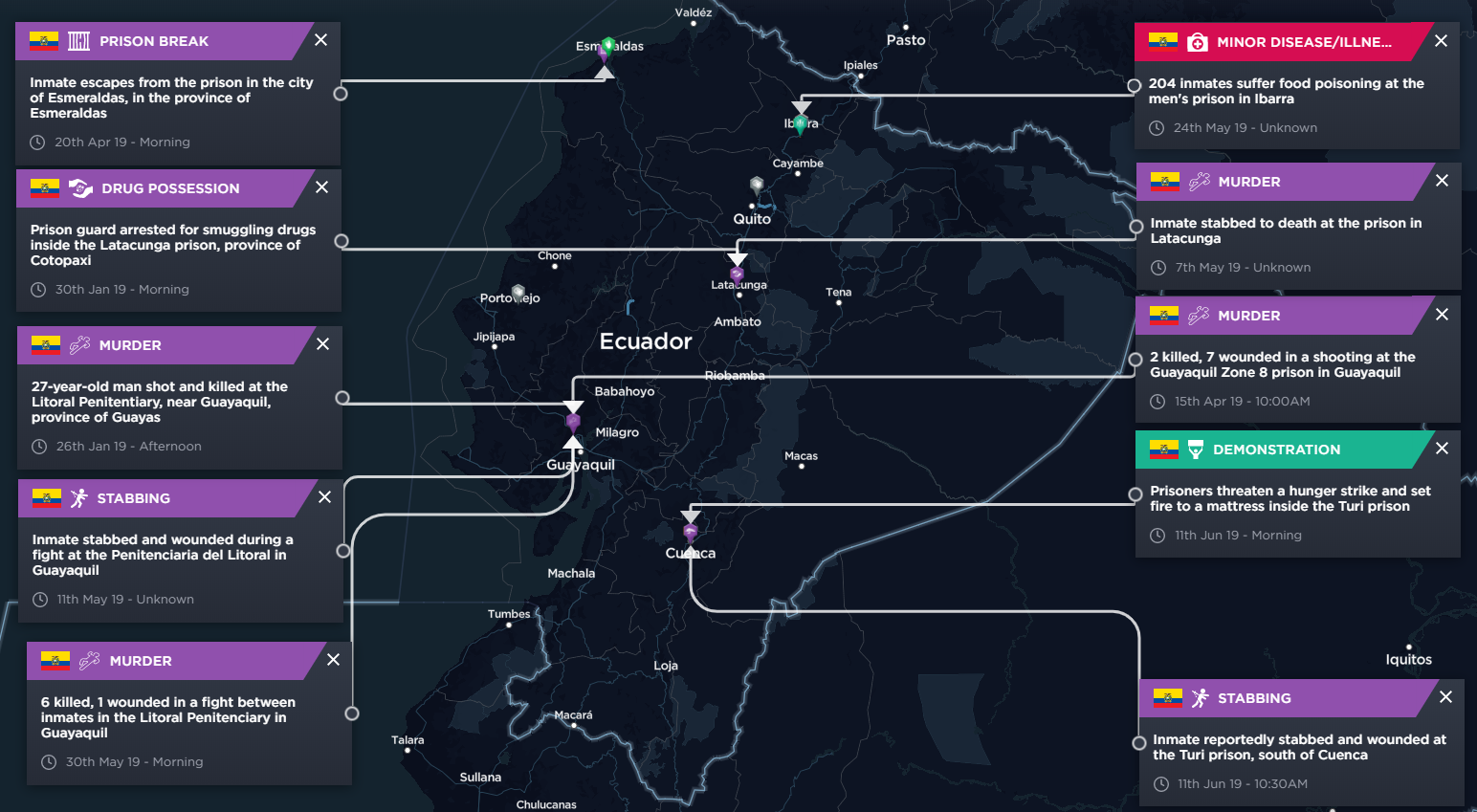 The declaration by President Moreno was made days after an inmate was stabbed and wounded in the Penitenciaria del Litoral in Guayaquil, another was killed in the penitentiary in Turi, and another was stabbed to death at the prison in Latacunga. Despite the new security measures, on 19th of May two inmates were killed inside the Penitenciaria del Litoral in Guayaquil, and on the 30th of May six inmates were killed and another wounded in more violence inside the same prison.

Additional security protocols were launched in early June, that include the use of drug-sniffing dogs and drones, as well as additional protocols for anyone that goes into prisons including staff, delivery drivers and visitors. Searches of prison cells are also ongoing to try and stem the flow of contraband, including drugs and a variety of weapons such as firearms and knives.

The prison system of Ecuador is home to over 40,000 inmates today, whereas it was 16,000 six years ago. The large increase has led an overcrowding rate of 40% at the national level, with some of the 52 prisons seeing mora than 100% overcrowding rates. Among this situation of overcrowding is conflict between various gang who control the prisons, and who fight for control of drug trafficking outside and inside prisons.

The two primary actors among a group of at least seven identified gangs, are the Los Choneros and Los Cubanos. The groups have been responsible for the deaths of recent inmates, such as the stabbing of a Cubanos members by Choneros members at the Latacunga prison in early May.

Addressing the problems inside the prisons of Ecuador will take more than the deployment of soldiers to control the perimeter and the entry and exits of staff and visitors. Currently, the country has approximately 1,520 prison guards for the 40,000 plus inmates it houses in overcrowded and delapitated prisons. The former director of prisons for the country, who resigned at the end of May, said that the country needed between 3,500-4,000 prison guards to help alleviate the workload.

Additionally, the guard’s salaries are not adequate, making guards prone to corruption, with close to two dozen expelled from their job in 2019 for helping inmates smuggle contraband. The government will need to address all these aforementioned issues, which may include negotiating with the gangs controlling the prisons, in order to improve the levels of internal security.

In the meantime, it is likely that violence will continue, as well as prison break attempts, although continued operations to rid the prisons of contraband may help reduce the more lethal methods of violence such as shootings and stabbings. While the levels of violence have not escalated to the same levels seen in other countries in the region, it is important the government address the issue as a matter of priority to prevent prisons from becoming breeding grounds for more hardened criminals that will cause havoc once released.