A PKK Attack Thwarted in Istanbul in 2017

Key Point: PKK militants in Turkey organise operations against high value targets and are able to mobilise their members accordingly in multiple locations throughout the country in a short period of time. Their ability to obtain high explosives from across the border and safely transfer them to their target location sustains their insurgency and increases the probability of an attack in an urban centre.

On December 13, 2017, a minivan was found loaded with 60 kg of RDX, PETN and HMX high explosives in Istanbul -Bahçelievler district, Åirinevler neighborhood, Mahmutbey 18. Street. Eleven PKK suspects were apprehended in Istanbul, DiyarbakÄ±r and Mardin. Authorities believe the target was the Organization of Islamic Cooperation (OIC) summit at the Istanbul Lütfi KÄ±rdar International Convention and Exhibition Center.

The explosives were hidden in fire extinguisher tubes with the addition of nails and small metal beads. They were placed in cases used for carrying fish and placed in the the back of a minivan. 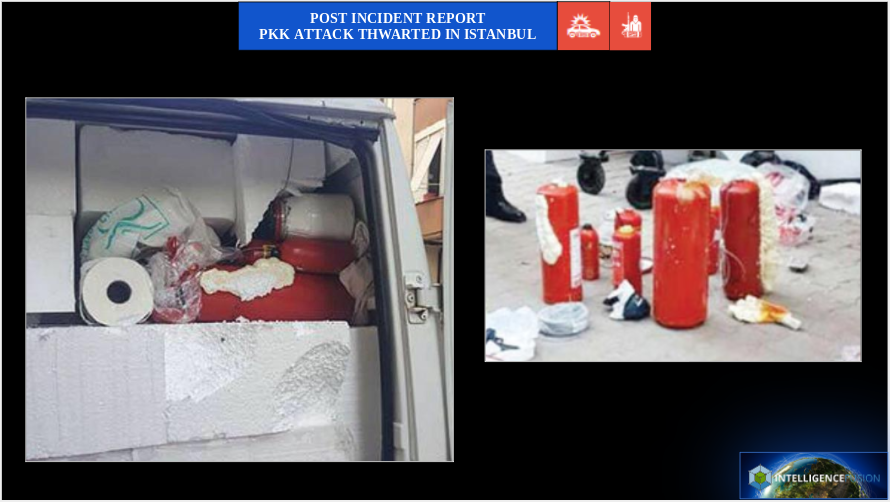 National Intelligence Agency (MÄ°T) agents were closely monitoring a group of PKK suspects in Diyarbakir – south east Turkey. The surveillance revealed that an individual based in Istanbul and linked to the PKK suspects purchased a minivan. Counter terrorism units in Istanbul tracked the minivan’s location to a parking lot in Bahçelievler by monitoring the surveillance cameras in the city and took positions near the location.

After a nearly 20 hour surveillance operation in Bahçelievler, two PKK members approached the vehicle and were subsequently captured. Bomb disposal experts found a number of fire extinguishers of different sizes containing 60 kg of RDX, PETN and HMX high explosives. In fear of a remote detonation, the police used a jammer to block all signals in the area that could set off the explosives.

Following the interrogations of the two arrested, a PKK insurgent, Hamza D, was arrested in Fatih/Istanbul. He was planning to detonate his suicide vest at the OIC summit at the Istanbul Lütfi KÄ±rdar International Convention and Exhibition Center. Further operations were carried out in Mardin and Diyarbakir where more PKK members were arrested.

The Explosives and the Target

The three explosives found in the fire extinguishers, RDX, PETN and HMX, are all classified as high explosives with detonation velocities higher than 8500 m/s. Aluminum dust was also found, a substance usually used as an explosion intensifier. The explosives were pressed and confined in steel tubes. That means that their detonation velocities would be much greater than if they were detonated in open air. After detonation, the quantity of the explosives hidden in the minivan would create an at least 60 meters core blast radius, capable to inflict significant damage on nearby buildings and personnel present in that zone. The explosion could potentially affect an area of at least 300 meter radius.

The authorities believe that the target was the Organization of Islamic Cooperation (OIC) summit at the Istanbul Lütfi KÄ±rdar International Convention and Exhibition Center, a building complex with many facilities, in Ä°stanbul’s ÅiÅli district. Increased security measures were taken during the OIC summit. The security perimeter was strictly controlled and the indoors facilities were thoroughly monitored and examined for any perpetrators or other threats.

The attack would involve a bomb-laden vehicle and a suicide bomber – based on the currently available information. Due to the increased security, the insurgents would likely avoid parking the minivan in the convention center’s parking lot. The parking lot would have been properly secured prior to the summit as security authorities have faced similar situations in the past when Islamic State members parked a bomb laden car at the parking lot of a shopping mall in BayrampaÅa/Istanbul on October 28, 2017.

A probable scenario is that they would most likely attempt to detonate the explosives near the convention center, most likely during the exit of the summit’s participants. The suicide bomber would then attack the fleeing public. A scenario of attacking a predetermined, specific target is also plausible. That scenario would have been more difficult to execute as it requires a more detailed operational plan and more detailed information such as, the target’s travel route, scheduled meetings, police roadblocks and checkpoints. Alternatively, we should consider the scenario that the suicide bomber and the VBIED would carry out their attacks at different locations. A multiple-location attack against OIC summit participants -or other symbolic targets- would be equally effective.

We should also note that President’s Erdogan intention to hold an OIC summit on December 13 was announced on December 6. Assuming that PKK insurgents had no previous plans to attack another target in Istanbul, they organized the whole operation in a short period of time. That might explain their operational failures such as their evident mobility and non secure communications which allowed MIT to become aware of their operation in the first place.

At the rural areas of south eastern Turkey the most common explosive materials used in IEDs by the PKK militants are TNT, PETN, large quantities of ammonium nitrate, plastic explosives such as C4, and dynamite. They are buried in mountainous paths or they are side-road placed and they are either automatically detonated by a pressure/fuse mechanism or remotely by electronic means. A tactic rarely used is Drone IEDs with an incident recorded on November 11, 2017, when a PKK drone packed with explosives was seized at the rural areas of AÄrÄ±’s DoÄubayazÄ±t district – Tendürek Mountain.

The PKK urban insurgency is of lower frequency but of higher intensity. The attacks are complex, with more than one insurgent involved either as a suicide bomber or as a VBIED driver. The explosives used during those attacks are usually of large quantities. IEDs placed in garbage bins or vehicles are also detonated during attacks in urban centres. The latest IED detonation incident at a non-rural area occured on October 17, 2017, during the passage of a vehicle carrying police officers in Mersin’s YeniÅehir district. The explosives were placed on a motorcycle and were remotely detonated.