Piracy Off the Southern Coast of the Philippines: Funding an Ongoing Conflict Against the Government 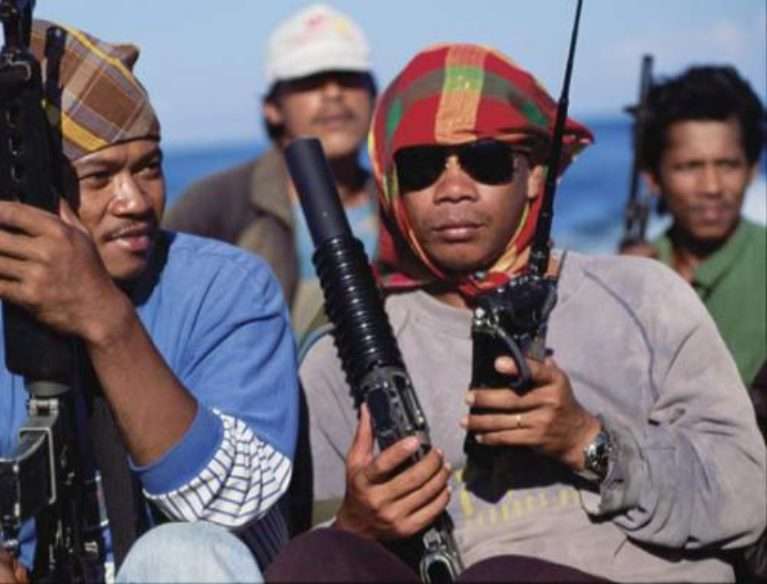 The movement of goods through water-based means of transportation continues to be the cornerstone of the worldâs economy. And for that good reason, it is important that countries around the world ensure that the container ships transporting goods are protected from any security concerns, one being piracy. The main shipping routes span the length of the globe, and pass near or through dangerous areas located near failed states, war zones, and areas of limited government control. These routes that pass through such areas, therefore become targets for those looking to either hijack the ship and crew for ransom, or to simply board and steal the cargo. Either scenario lead to an economic loss, and in worst case scenarios, the loss of life. 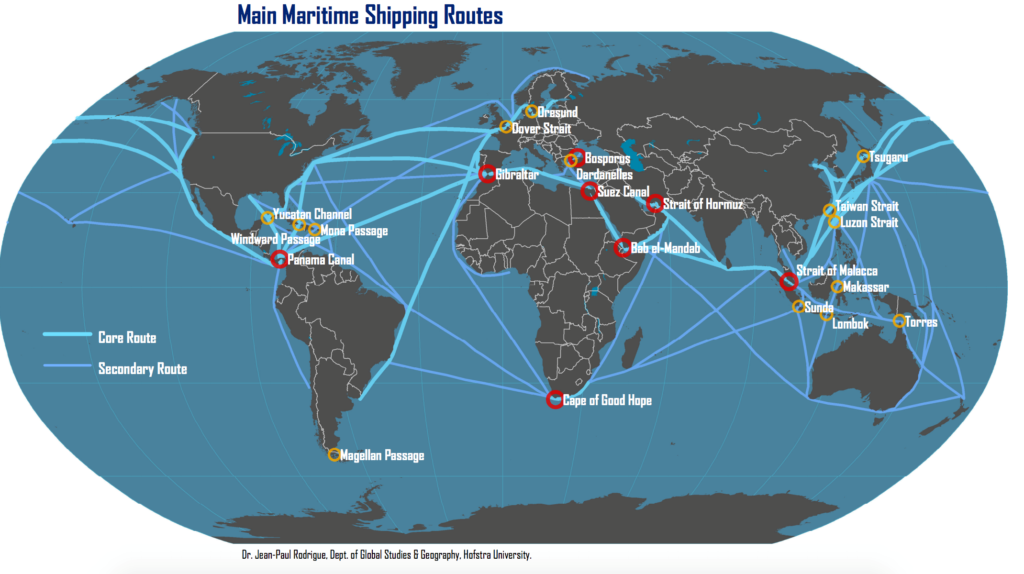 Piracy off the coast of Somalia has long been the primary area of concern, and the one most publicized to the public. Coordinated anti-piracy operations have been underway in that area for the past 9 years. In 2008, Operation Allied Provider was put in place at the request of United Nations Secretary Ban Ki Moon, and was responsible for escorting World Food Program vessels, and patrolling the waters around Somalia to help deter piracy, which was a continuous threat to the region. Operation Allied Protector followed from March to August 2009, and finally, from August 2009 to December 2016, Operation Ocean Shield. These operations had similar mandates to protect the commercial shipping lanes, to engage in surveillance of pirate activities, and to use force if necessary against any pirates in the area of operations. While NATO has been operating in the region has caused a drop in the number of piracy incidents over the course of their operations, it is of note that due to the focus being put on this region, two others have not been placed into the spotlight, but perhaps should: the Gulf of Guinea and South East Asia including the Strait of Malacca, the coast of Singapore and coast of the Philippines).
Piracy and armed robbery in the Gulf of Aden near Somalia has involved pirates hijacking ships, and to holding the ships, their crews, and their cargos for ransom. These tactics differ from piracy in Asia, where primarily pirates have either boarded ships at anchor or in ports to steal personal property or cargo, or attacked smaller vessels on the open sea to kidnap the crew. This expands the number of targets available to would-be pirates. In January 2017, the head of the regional anti-piracy body said that pirates in Asia were now changing their tactics, targeting bigger ships in hopes of larger ransom payments for their kidnapped crews.
Of concern these past couple years has been the growing number of incidents in the tri-border area in South East Asia. This area includes parts of southern Philippines, eastern Malaysia, and parts of Indonesia. It additionally includes the Sulu and Celebes Seas. In 2015 more than 100,000 ships and 18 million passengers passed through the Celebes and Sulu Seas with a cargo value of around $40 billion. 2016 will show a 58% drop in the number of incidents compared to the previous year in Asia, but although the number of incidents has gone down including the number of hijacking and hostages on board, one number that has risen has been kidnappings. In 2015, there were 19 people kidnapped, while in 2016, that number rose to 62, with 28 taken from tugs, barges, fishing boats and merchant ships and believed to be transferred to Mindanao. It is said that most of these abductions were perpetrated and claimed by terrorist groups in the Philippines. In 2016, it is estimated that Abu Sayyaf, one such group, received more than $7.3 million in ransom payments from those they had kidnapped at sea. 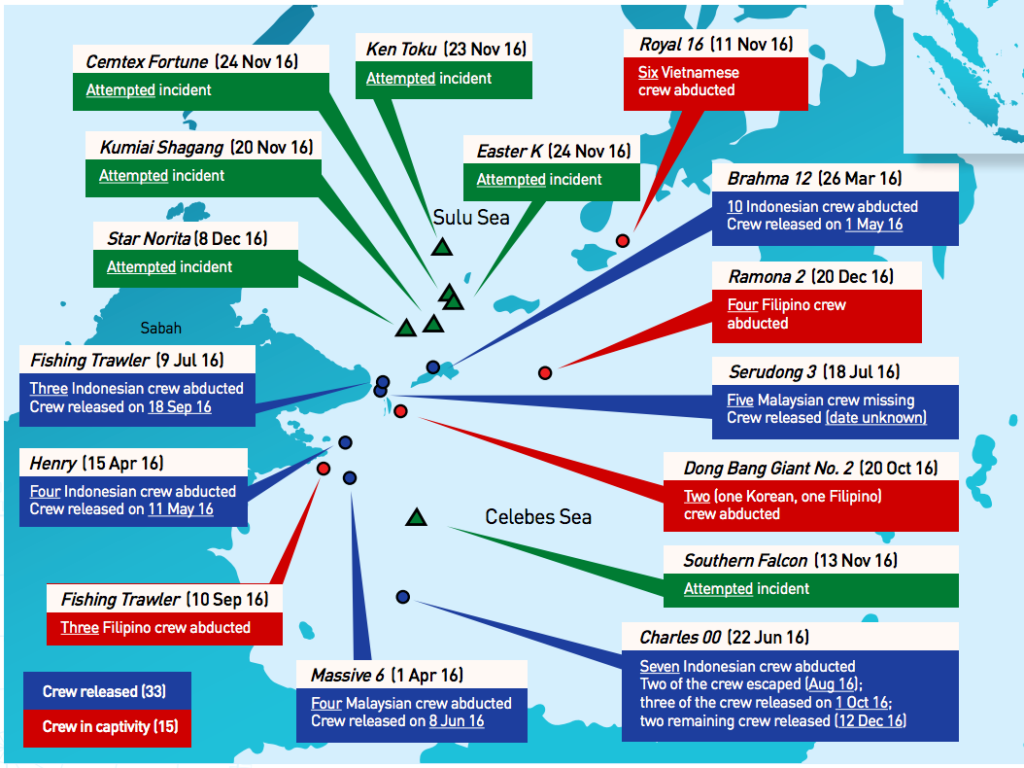 Steps have been taken by the Philippines, Malaysia, and Indonesia to attempt to secure the shipping lanes and to attempt to cut off one of the sources of income for terrorist groups in the region. In September 2016, President Rodrigo Duterte met with Indonesian President Joko Widodo to discuss ways to curb Islamic extremism and fight maritime piracy in the Sulu Sea. Both leaders agreed on an increase in patrols, as well as allowing Indonesia to enter Philippines waters if in pursuit of pirates. This is continued progress towards the Philippines, Indonesia, and Malaysia patrolling these waters and stopping groups like Abu Sayyaf from kidnapping those sailing in the countries shared waters.
Unfortunately, the first month of January has shown that the increase in patrols has not deterred pirates. Multiple incidents of kidnappings or attempted boarding have already been reported. Events have been reported in Batangas port, Philippines, in Samarinda, Indonesia, and in Sandakan port, Malaysia regarding theft of goods from ships at anchor or in port. A bulk carrier was fired upon by pirates attempting to board it, but the pirates were eventually thwarted by the Philippinesâ Coast Guard. Additionally, 3 Indonesians have allegedly been kidnapped off their boat by Abu Sayyaf in the waters off the southern Philippines. After one of the most violent attacks at sea this month, the deaths of 8 fishermen in the Moro Gulf, the Philippines Coast Guard are looking at deploying sea marshals in the Gulf to prevent future attacks, and are also looking at expanding the area of patrols. It was announced January 21, 2017 that the Philippine Navy will send 30 speedboats and some of its best men the Naval Forces Western Mindanao, to help fight Abu Sayyaf and attempt to stop maritime kidnappings.
Ships have been warned to avoid the Sulu Sea after these incidences of kidnapping and attempted boarding have already taken place in this first month of 2017. The warning has come from the International Maritime Bureau. Ships that used to transport goods and mineral resources through shipping lanes in the Sulu and Celebes Seas are now diverting their routes, passing east of the Philippines in the open Pacific Ocean to regain ports further north. The added costs so far are $300 a day for the extra fuel, but in the long run additional costs may add up. with Indonesia having stopped tug boats carrying coal to the Philippines from entering Filipino waters, only allowing larger ships to go through. This shows that the issue of piracy is not only a security issue for those traveling in those waters, but an economic one, as it disrupts flows of goods between countries in the region. With a new shipping route from the Philippines to Indonesia being announced, as well as a major shipping line announcing that they have decided to make Manila one of their home ports, it is important for the Philippines, Malaysia and Indonesia to pool resources to ensure the safety of any ships passing within their waters and staying in their ports.
The continuation of boarding and kidnapping of ships and crews in the Sulu and Celebes Seas, particularly by terrorist groups in the Mindanao region of the Philippines, is not only a maritime issue, but an issue for government forces on the ground. The money made by these groups, who have sworn allegiance to the Islamic State, funds their ongoing war against the government of the Philippines for control of Mindanao, and it will continue to do until either these groups are defeated, or their access to purporting piracy has been denied through increased patrols of these seas. The governmentâs efforts may be made more complicated after the communist rebels, who had been negotiating a peace agreement with the government in Rome, have given their military arm, the National Peopleâs Army (NPA) freedom to break the ceasefire with government forces. On January 21st, a clash between government forces and the NPA led to the deaths of 8 soldiers and 1 rebel. With conflicts between government forces and a range of terror organisations in Mindanao, and the potential resumption of hostilities with communist rebels, there is a risk that the Armed Forces of the Philippines will be spread thin, and therefore leave Abu Sayyaf and similar groups to continue their acts of kidnappings, further funding their campaign.
President Duterte has taken a hard line to his approach at dealing with would-be kidnappers, saying that heâs told his armed forces to bomb them all (i.e. kidnappers) to stop them from getting away, and calling any kidnapped victim of such tactics âcollateral damageâ. The statement was softened by spokesman for the Armed Forces of the Philippines, saying that the military has its orders from the President, but that they will apply their best judgment and take the hostages in consideration when undertaking such operations. A final point to think about is, will this hardline approach stop the issue of piracy in the Sulu and Celebes Seas, or will it lead to the deaths of hostages caught in the cross fire?
Back to Reports & Resources