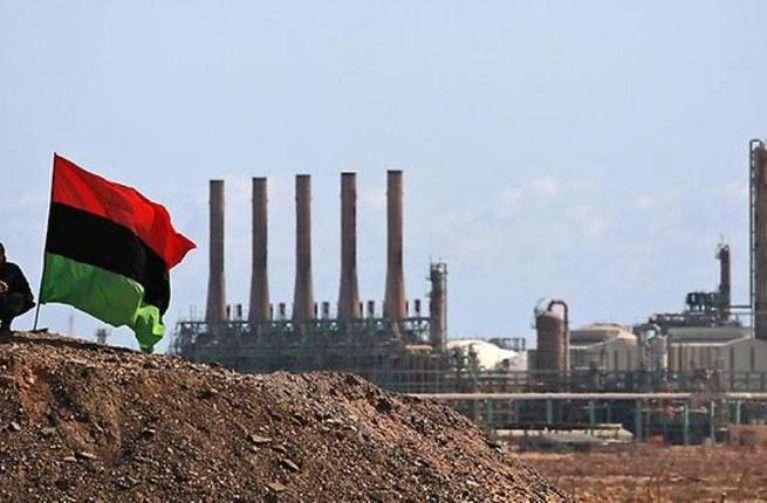 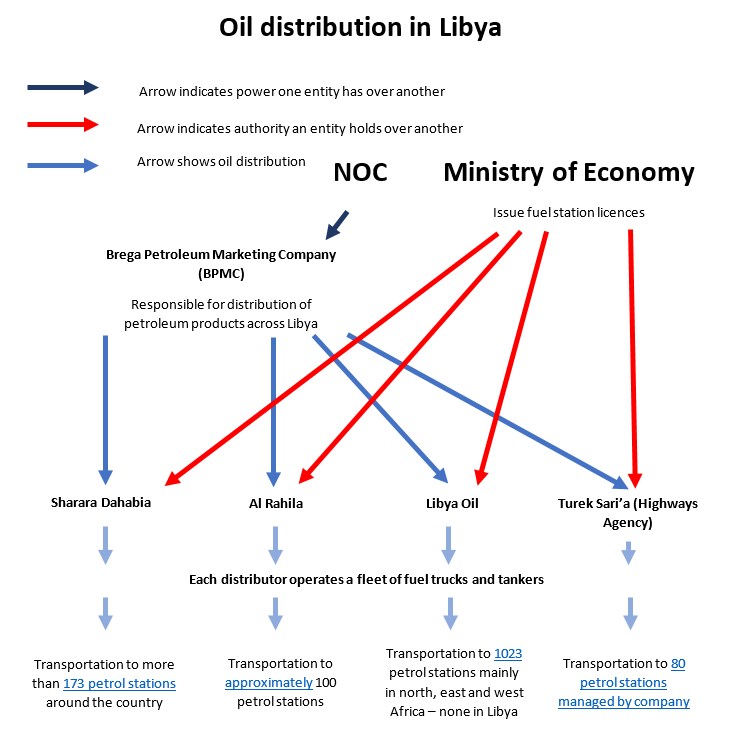 Fuel Smuggling in Libya
Fuel smuggling, and broadly smuggling in the Maghreb and north Africa, is by no means a new issue. Smuggling routes have existed before borders were drawn. Geography, terrain, poor governance, lack of cooperation and security/ interoperability and technological innovation are just some of the many factors attributed to continued smuggling of legal or illegal commodities. For instance, as shown by the World Bank, informal trade across the Tunisian-Libyan border accounts for more than half the official trade with Libya. Tax regimes, corruption, price differences, fuel subsidies and unwillingness to enforce tariffs for fear of protests along the border, are among the reasons for continued smuggling. Communities on both sides of the border depend on cross-border trade and smuggling comprises a fundamental part of livelihoods in the Maghreb. Fuel smuggling is the most lucrative illicit trade between Tunisia and Libya.
In January 2017, the outspoken and respected chairman of the NOC, Mustafa Sanalla, voiced his frustration at the knock-on effects fuel smuggling was having on Libyan society when a Libyan family suffocated to death as a result of fumes produced through the burning of charcoal for power generation, due to the power cuts, a common occurrence in Libya. Sanalla equated fuel smugglers to terrorists and urged municipalities in western Libya to take action against smugglers, warning âunprecedented local and international procedures will be taken against whoever tries to abuse the wealth of the Libyan people and that ordinary Libyans are first to be affected by shortages of fuel at petrol stations. Fighting between militias has also affected fuel supply as have power outages and the liquidity crisis, as well as traffic congestion.
Actors involved
Since anarchy and insecurity took hold after the revolution, Libya has been dogged by fuel shortages at fuel stations. Officials at BPMC repeatedly claimed that the allocated amount of fuel has been sent to distribution companies. Sanallah revealed fuel smuggling gangs were stealing fuel allocations from distribution companies (Sharara Dahabia, Rahela, Libya Oil and Turek Sariâa). Distributors affiliated with the Ministry of economy assume legal responsibility related to the transfer of petroleum products once it is passed on to them by BPMC.
Economy controllers affiliated with the ministry of economy in different regions are the entities which give permission to the four distribution companies to issue licenses (see fig. 1) for petrol stations following the separation of distribution and transfer activity of oil products under the Resolution of the General Peopleâs Committee (previously) of the year 2007 No. 289 and 293 and following political division that led to the separation the distribution companiesâ departments. The NOC have expressed frustration with the lack of rigor by the Ministry of Economy in the issuance of trading licences.
Suspicion soon shifted to distribution companies culminating with the Libyan Attorney General issuing travel bans against the CEOs of Al-Rahila Oil Company, Libyan Oil Company, Al-Shara Al-Dahabiya and Al-Tariq Al-Sareeya companies, adding they are under investigation. Investigations into corruption in Libya have led to warrants being issued against numerous government ministers. The nature and depth of their corrupt practices are not known. 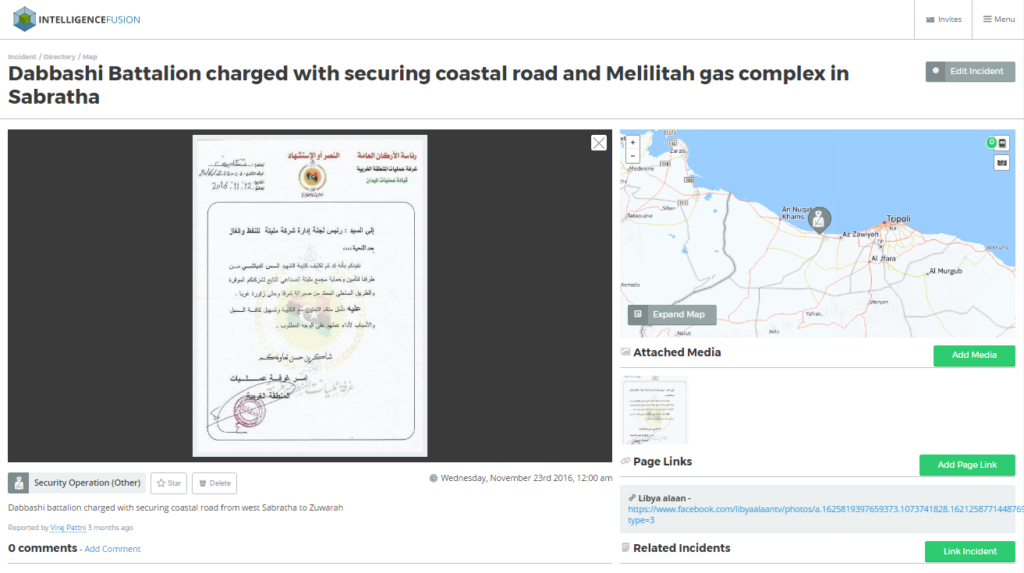 An investigation carried out by Middle East Eye, reveals that the Haneesh Militia and the Anas Dabbashi Battalion are major players in oil smuggling (and human trafficking) out of Sabratha. As stated by their source, âthe armed militias, who control the area between Zawiyah and Sabratha, share out zones of interest with the complicity of the police and the local coast guardâ. Small boats and tankers containing up to 40,000 litres of refined fuel are loaded with fuel at night and sent to Malta and Sicily, it is sold before it reaches its destination. Locals in Sabratha say militias have agreements with the Sicilian Mafia in such operations. Confidential sources in the Libyan government say foreign companies are blackmailed by the armed militias to pay bribes, in cash or fuel, to continue operating in the area. Last year, the Anas Dabbashi battalion signed a contract with ENI and Melilitah Oil and Gas to secure their premises. Libyan intelligence claim the level of corruption to be pervasive to the extent entire groups of police and coast guard are openly involved in trafficking, especially in the Zawiyah and Sabratha area. Sanalla accused the Nasr Brigade (western PFG) and named Mohammed Kashlaf, their commander of using the Zawiyah Refinery to run smuggling operations.

Sanalla also criticized a local border agreement which allowed Tunisians to repatriate 150 litres of fuel on top of the contents of their vehicleâs tanks. According to the Libya Herald, Tunisian fuel smugglers living in the border region are making constant trips across the border into Libya, filling large customised tanks with petrol at petrol stations close to the Tunisian border.
International Organised Crime Groups
Sanalla asserts fuel smugglers are part of international criminal organizations and that their presence is a threat to national, regional and international security. The Libyan Attorney General, too, said it was a known secret that Maltese businessmen were heavily involved in the smuggling and that those that have been arrested are from Italy, Malta and the Ukraine. Detailed reports by the UN, have mentioned Maltese companies and vessels by name involved in the transfer thousands of litres of smuggled fuel from Libya to Malta. The reports include the tracking of these ships and also dates when ship-to-ship transfers on the high seas took place. The UN state ships, hired by Maltese registered companies such as ADJ Trading, co-owned by Libyan national Fahmi Ben Khalifa and Darren Debono, sail from Malta to within 40 and 60 nautical miles off the coast of Libya, where they turn off their automated tracking systems before returning to Malta. Returning ships loiter approximately 12 miles off the coast of Malta, it is here where fuel is transferred to other vessels.
In 2014, Maltese authorities arrested two Maltese individuals in connection with smuggling diesel from Libya. One individual, owner and sole director of an oil importing company, was assassinated in Marsaxlokk when a bomb detonated under the seat of the car he was driving. In 2014, there were reports of some fishing boats in Marsaxlokk that equipped their decks with multiple heavy-duty water tanks ready to be filled with fuel. As said by the Libyan Attorney General, recent investigations on smuggling concentrate on criminal gangs in Malta, Italy, Greece and Cyprus. The Libyan Attorney General has revealed that cooperation with Greek and French police has assisted in collecting evidence in the past and it is likely he will seek cooperation with Malta, Italy and Cyprus against organised crime groups engaged in fuel trafficking.
In more than one instance, there have been reports of international organised crime groups conducting business with groups in Libya. Reuters reported on illicit weapons transfers from Ukraine making their way to conflict zones including Libya, with an arms embargo in place, there is high demand for armaments. Lending weight to reports of arms trafficking is the fact that UNSC last year adopted resolution 2292 and the EU expanded Operation Sophiaâs mandate to include intercepting ships suspected of trafficking arms. La Stampaâs investigation revealed the illicit trade in antiquities between IS and other groups (when they controlled Sirte and had a large presence in Sabratha) and Italian criminal organisations. Weapons, transferred by the Russian mafia from Moldova and Ukraine, are bought by the Nâdrangheta in Lamezia and Camorra in Campania before being shipped to Libya via ships controlled by Chinese criminal groups. Though ISâs involvement in antiquities is contested, reports certainly point to the existence of an illicit trade in antiquities.
Anti-smuggling measures
Previous discussions concerning anti-smuggling measures in October 2016, have generated ideas such as forcing petrol stations and distribution companies to deposit the value of fuel sales in cash within banks in the municipality as this will also contribute to solving the cash liquidity crisis that Libya suffers.
In mid-January, anti-smuggling measures were discussed at a meeting between the NOC and BPMC. It was decided all fuel stations will be inspected to see if they meet technical and safety standards and whether they are operational or even exist. Many fuel stations have existed only on paper as fronts for fuel smuggling and have been receiving heavily subsidized fuel for years, especially those in rural Libya. Distribution companies, too, will be inspected to check if they conform to anti-smuggling measures. Deterrents have reportedly been put in place against exploitation of, or by, fuel stations and distributors. Only certified petrol stations (certificates are renewable) will be supplied with fuel, oil and cooking gas. The BPMC are in the process of identifying fuel stations complicit in fuel smuggling and compiling a list of individuals to hand over to the attorney generalâs office. BPMC have, or intend to, create a separate division to follow up on inspection of distribution and petrol stations. BPMC have made unannounced visits to fuel stations in western areas to assess functioning stations on at least one occasion. The coast guard and air force will also take part in large-scale anti-fuel smuggling operations.

Meanwhile, the NOC are working on initiatives and logistical solutions to work out operational obstacles faced by BPMC. Clear and measurable steps have been taken to âput forward plans and scheduled programs for an immediate implementation of solving the basic problems which aim at the continuing of fuel supply and cooking gas to Libyan cities and regions to achieve equality and sufficiency in distribution among the municipalities according to population and other factors. Several fuel stations supplying gas and fuel at official prices (not at black market prices) run by BPMC will be opened in Tripoli with a further fourteen opened in south and western regions of Libya. BPMC are also working on reopening gas stations operating before 2011. 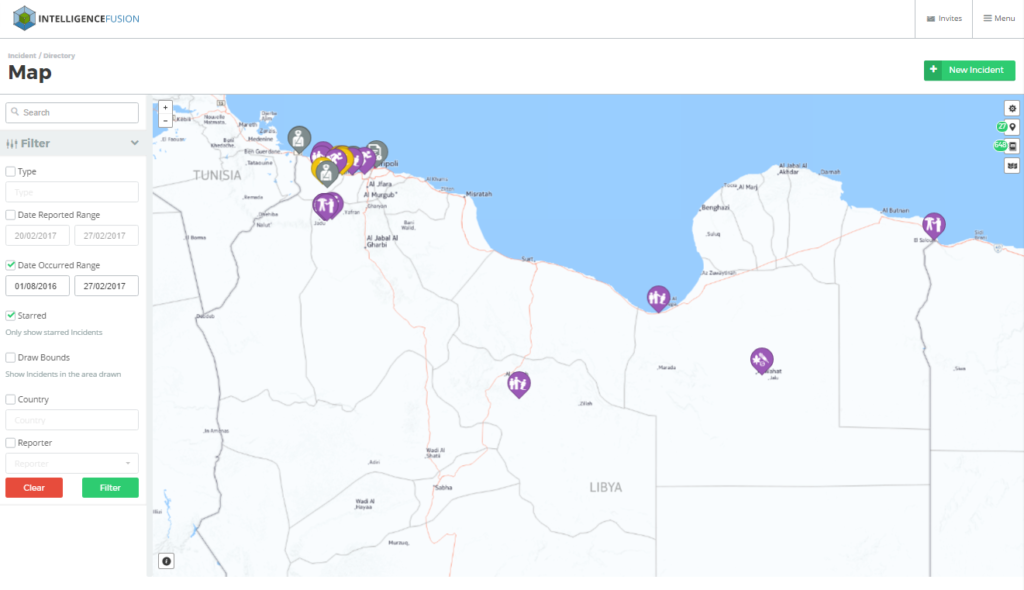 Each fuel tanker has a capacity of approximately 20,800 to 43,900 litres. In one case, in July 2016, a tanker, thought to be transporting oil, was, in fact transporting water. The tanker was seized and driver arrested when it was found to be emptying water into a Sabha oil depot tank. The Eighth Power, charged with securing Sabha oil depot, have arrested fuel smugglers, smuggling fuel out of Sabha oil depot on numerous occasions.

Activity in related to fuel smuggling seems to be most active around Sabratha and Zawiyah between 01/08/2016 to 20/02/2017. Smugglers are most likely avoiding major roads (i.e. coastal roads), and exploiting areas between Zintan and Zuwarah. The road going south towards Suq Alaliqah has seen lots of fuel smuggling related activity in the last four weeks. 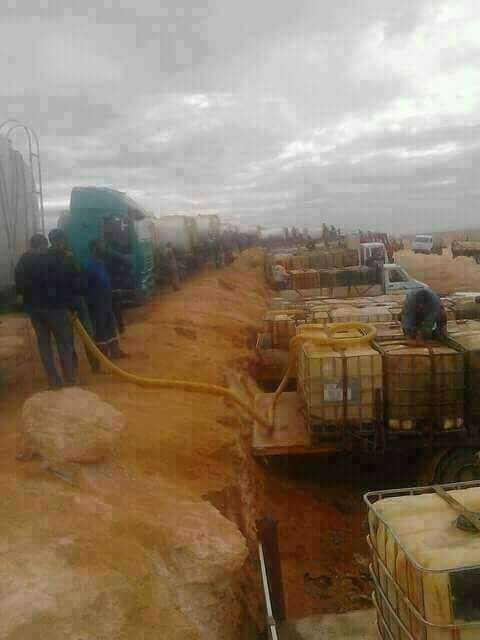