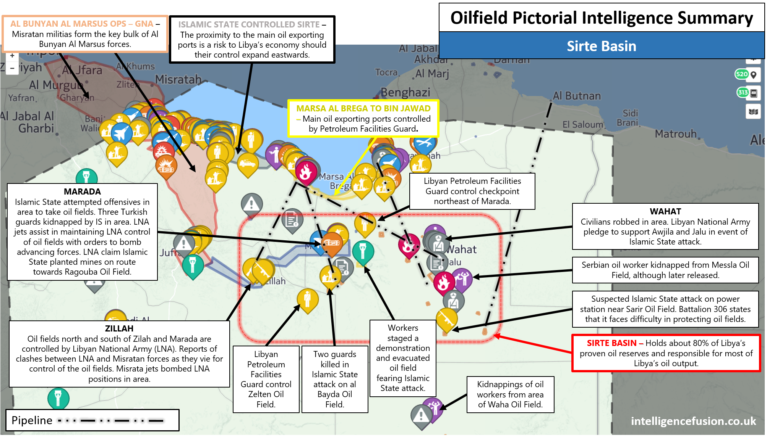 Overview: The Sirte Basin holds about 80% of Libyaâs proven oil reserves and is responsible for most of Libyaâs oil output. The basin is located in the centre of the country and the majority of the pipelines lead to the main refineries and exporting terminals between Marsa al Brega and Bin Jawad. The control and security of Libyan oil is as fractured as the political system and has had the impact of seeing oil production in the country plummet. The oil fields are currently held by the Libyan National Army and the Libyan Petroleum Facilities Guard, however, Islamic State and Misratan forces have been vying for control of the fields, which would provide valuable revenue. Fears of Islamic State attacks have forced oil fields to close and the staff to be evacuated in recent months. In one incident two vehicles branded with the distinctive black and white ISIS flag were spotted in the vicinity of a facility, causing employees to go on strike, highlighting the climate of fear among oil workers. In addition to skirmishes for control of the fields, there have been LNA and Misratan air strikes reported in the basin and numerous incidents of kidnappings of oil workers and armed robbery.
Back to Reports & Resources