Northern Ireland: PSNI report reveals up to 8 hate incidents are reported each day 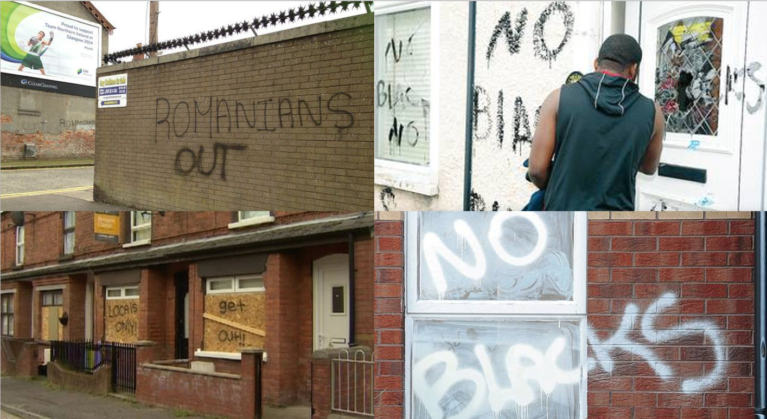 The number of racist cases reduced slightly to 1,133 in the 12 months to June but remained one of the highest tallies since records began in 2004, according to PSNI statistics. Amnesty International said the level of crime inspired by racism, sectarianism or homophobia was disturbing.
Patrick Corrigan, Amnestyâs Northern Ireland director, has commented:
âOverall, there are eight hate-motivated incidents or crimes reported to the police every day in Northern Ireland. Three times a day there is a racism-motivated incident or crime â almost as high as the figures for incidents motivated by sectarianism, despite the relatively small numbers of people in Northern Ireland from ethnic minorities or from other countries. (The 2011 census found that 32,400 people â 1.8% of the usually resident population â belonged to ethnic minority groups).
There were 1,208 sectarian incidents including 874 sectarian crimes, as well as 324 incidents including 201 crimes with a homophobic motivation, according to a PSNI report to the end of June.
ââ¦Attacks on premises such as Orange Halls have grown, an ugly trend which must be endedâ¦â The most recent attack took place in Salterstown, where an Orange Hall was damaged significantly in an arson attack, bringing the total to 21 attacks on Orange Halls this year. The damage in this attack was indeed significant, causing huge community outrage. A list of the 2016 attacks on Orange Halls can be found at the bottom of this report. 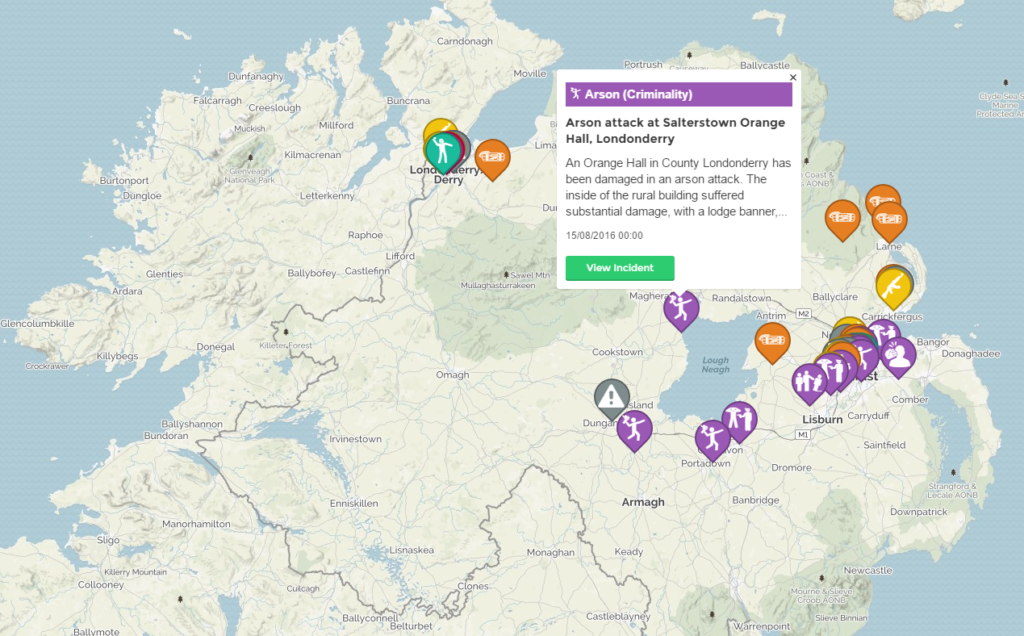 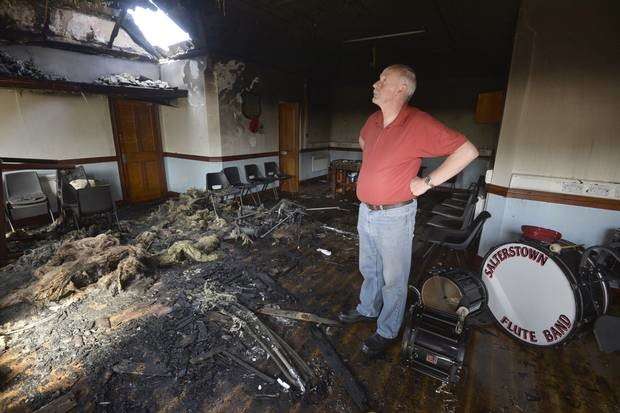 ââ¦This month, a rock was thrown through the window of a Slovakian familyâs house in Belfastâ¦â The attack, that took place on Thursday 25th August, was linked to the subsequent discovery of a viable pipe bomb that then caused a security alert in the Atlantic Avenue area of North Belfast. 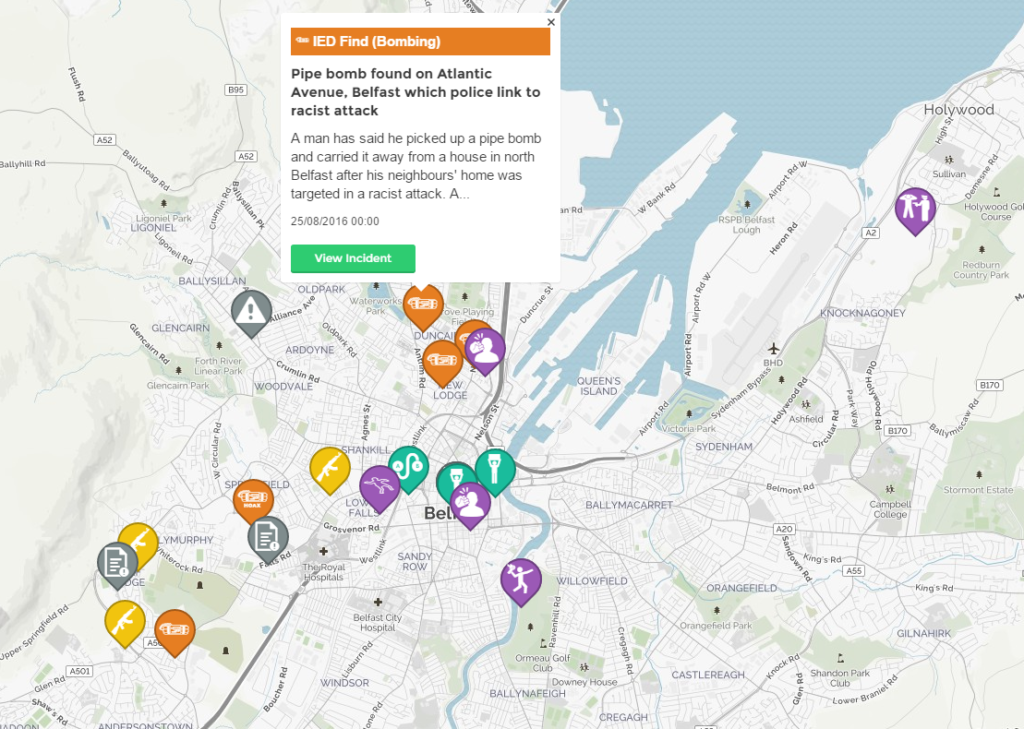 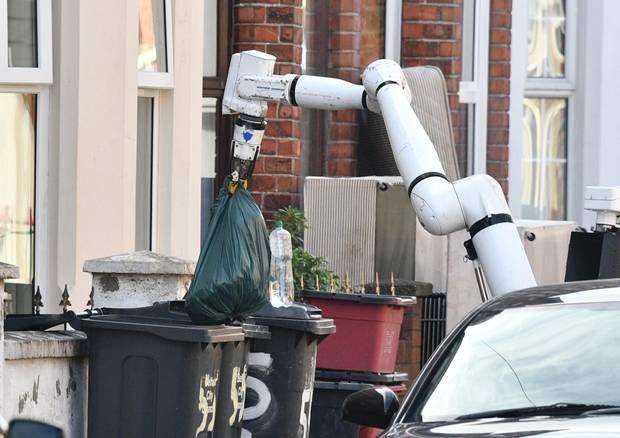 ââ¦Last year, an African pensioner whose house was targeted by racists in a paint bomb attack left his home.â The paint bomb attack, that occurred on the weekend of the 3rd and 4th August 2015, left 65-year-old Ghanian, Adu Kyeremateng, feeling threatened and caused him to then leave his home on Townsend Terrace in the loyalist Shankill area.
The report also calls for better accommodation for the traveller community in Northern Ireland. Northern Ireland Human Rights Commission Chief Les Allamby welcomed the call supporting Northern Irelandâs travelers, âThe committee has highlighted the disparity in equality protection between Northern Ireland and the rest of the UK, calling for a Single Equality Bill to address this problem.â
Mr Corrigan further commented, âWe welcome the publication of these figures by the PSNI and the slight decrease in some forms of hate crime they show. But overall the response must be of huge concern given that almost 3,000 such incidents were recorded by the police last year.â The police figures do also show that fewer than one in five racist crimes result in any specific outcome, suggesting that over 80% of such hate crimes result in no prosecution or even warning for the offender.â
Following the publication of these figures, the Northern Ireland Human Rights Commission (NIHRC) has called on the Executive to do more to improve life for people from minority ethnic backgrounds.
Notably, the NIHRC has also recognised the recent sharp increase in racist hate crime following the decision for the UK to leave the European Union. Such correlation is indeed concerning, and is one that appears to be shared by many as it is revealed that David Ford, former justice minister, is among a cross-community group of politicians and human rights activists whose lawyers have written to PM Teresa May urging her to consider Northern Irelandâs peace process before triggering Article 50. As such, the question of the implications of Brexit on Northern Ireland, does continue to cause significant concern, a subsequent report on which will follow.
It does then seem crucial to closely monitor the constantly developing situation in Northern Ireland. Whether it be increasing occurrences of hate crime or indeed resurgences of sectarian violence, the volatile situation in Northern Ireland, that is seemingly balanced precariously on a knifes edge, has the potential to indeed become more imbalanced in the near future. A close monitoring of the general political, economic and cultural situation in Northern Ireland, could also highlight any potential instabilities that could cause further imbalance within the country; sectarian or otherwise. With regard to specific questions raised by this report, from the statistic âthat over 80% of such hate crimes result in no prosecution or even warning for the offenderâ, it does seem important to not only monitor the reports of the PSNI, but also the convictions made by the same. A crucial aspect within this is the consideration of the border questions that have inevitably emerged in the wake of Brexit. The fact that 47 police chases ended at the border in the last five years, raises huge questions regarding the protocol of border crossing from Northern Ireland to the Republic.
Attacks on Orange Halls, 2016:
17/02/2016 Strawletterdallon Orange Hall Tyrone Windows broken at rear
19/02/2016 Strawletterdallon Orange Hall Tyrone Windows broken at front
22/02/2016 Rasharkin Orange Hall Antrim 1916â² Republican Graffiti
23/04/2016 Clifton Street Belfast Paint attack
03/05/2016 Strawletterdallon Orange Hall Tyrone Windows Broken
10/05/2016 Ballyneal Orange Hall, Magherafelt Londonderry Attempted Arson
29/05/2016 Wattlebridge Orange Hall, Newtownbutler Fermanagh Hoax bomb alert
04/06/2016 Crewe Orange Hall, Upper Ballinderry Antrim Paint attack
14/06/2016 Derrighy Orange Hall Antrim Graffiti Attack
26/06/2016 Muckery, Lurgan Armagh Attempted Arson â Oil tank set alight
30/06/2016 Tanvally, Banbridge Down Graffiti
30/06/2016 Corbet, Banbridge Down Graffiti
02/07/2016 Ballyneal Orange Hall, Magherafelt Londonderry Flags Stolen
09/07/2016 Ballyneal Orange Hall, Magherafelt Londonderry Flags Stolen
10/07/2016 Dysart Orange Hall Down Graffiti
20/07/2016 Newmills Orange Hall, Dungannon Tyrone Graffiti
21/07/2016 Dervock Orange Hall, Antrim Bus destroyed in Arson Attack outside Hall
29/07/2016 Augharan Orange Hall, Dungannon Tyrone Flags Stolen, Vandalism
02/08/2016 Dungonnell Orange Hall, Ballymena Antrim Graffiti
03/08/2016 Flowerhill Orange Hall, Lisburn Antrim Graffiti
15/08/2016 Salterstown Orange Hall, Magherafelt Londonderry Arson Attack- Internally Gutted
Back to Reports & Resources