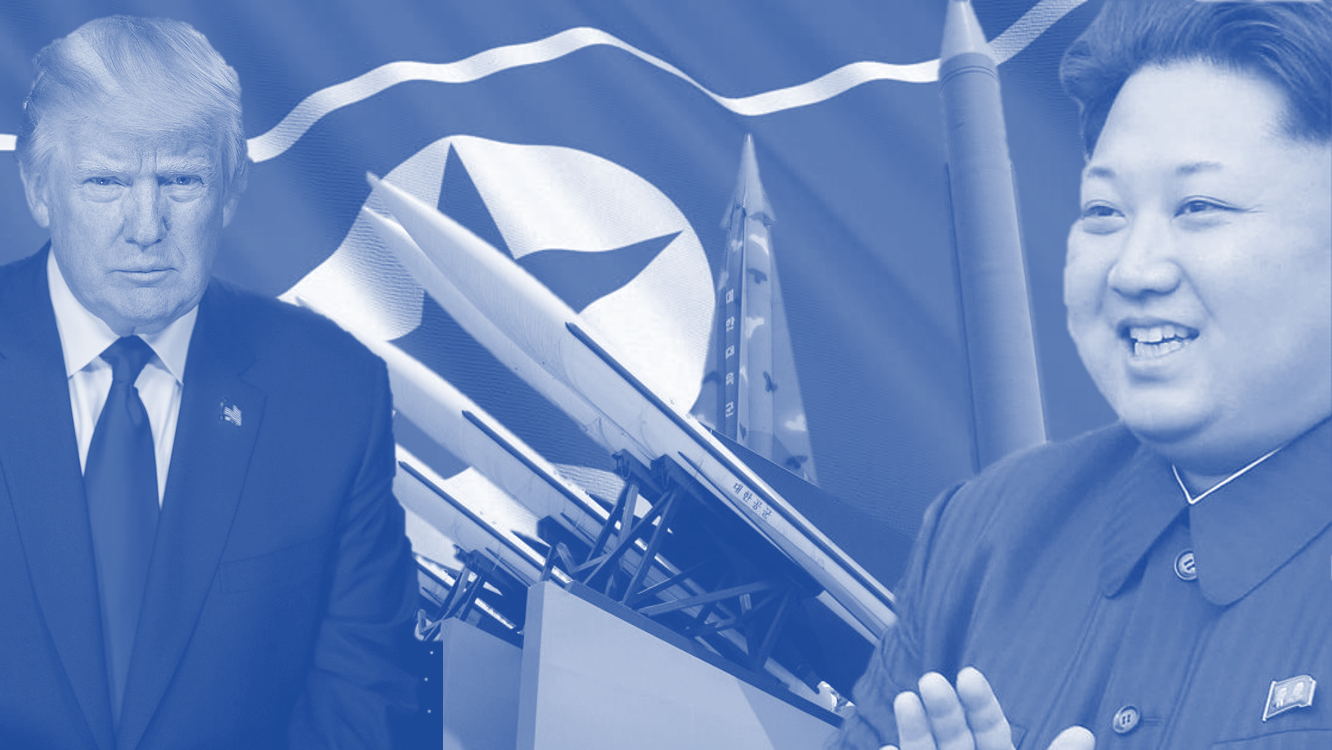 Recently, questions have been raised regarding the United Statesâ missile strikes on Syriaâs Shayrat Airbase. The 59 tomahawk missiles targeted the airbase which was believed to have been used to launch a chemical attack on the rebel held area of Khan Sheikhun. This event has led to praise from some members of the international community, but has led others to reproach the strike as an assault on the sovereignty of another state without hard evidence. Those reproaching the strike are those supporting the Assad regime in Syria. Additionally, this has led to further questions on the type and scale of engagement President Trump will seek in Syria, and the methods used to support his âdoctrineâ of flexibility. The missile attack on Syrian air forces has shown the willingness of Trump to strike a countryâs military, something that differs from fighting non-state actors in the War on Terror, such as the Islamic State and Al-Qaeda. Can this âone-timeâ shift in targets preface the United Statesâ willingness to strike another country, more specifically, now that the United States has shown its military might in Syria, would they be willing to do the same to assuage the threat of North Koreaâs nuclear ambitions?
Since the beginning of 2017, movement on the Korean Peninsula has been quite active. North Korea continues its nuclear programme and missile tests as a method of deterrence, so that Kim Jong Un does not face a Libya or Iraq scenario, where the heads of state were removed from power after having dropped their own nuclear ambitions. In the last few months, multiple missile tests have taken place, satellite imagery and analysis gathered by think tanks and government intelligence agencies have determined that the regime has tested new rocket engines and reactivated nuclear reactors. 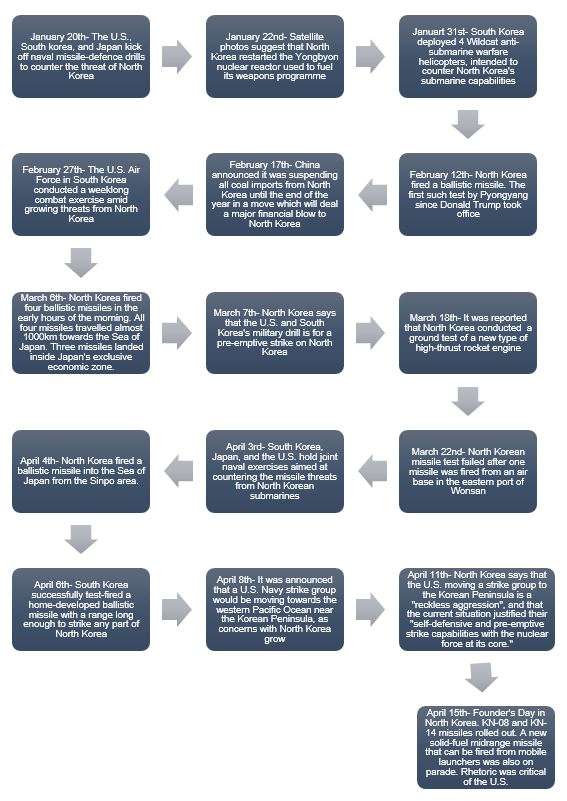 All events point to an eventual 6th nuclear test, which on April 12th was determined to be a possibility, when satellite images gathered by think tank â38 Northâ, showed activity around the Punggye-ri nuclear site, on the east coast of the country.
Claims have been made that this continued activity is proof that a nuclear test is imminent. Previous nuclear tests by the regime were met by condemnation from the international community, and additional sanctions were placed on North Korea.
What differs now is the rhetoric, not only from North Korea, but also from the United Statesâ new President and his administration, towards solving the North Korean crisis, and towards other powers who have a role in solving the crisis. On a visit to South Korea in March, Secretary of State Rex Tillerson, ruled out negotiating with North Korea on freezing their nuclear and missile programmes, suggesting instead that the United States could take preemptive military action in the instance that North Korea continues to pursue its perceived acts of aggression. At the same time that the Secretary of State was in South Korea, President Donald Trump tweeted the following:

The tweet showed not only the view held by the President, but also showed the mindset towards Chinaâs role in the resolution of the tensions. This was also before the Secretary of State was heading to Beijing, and prior to President Xi Jinpingâs visit to the United States to meet with President Trump in early April. With the rhetoric surrounding the North Korean crisis, there are multiple scenarios that can occur.
Scenario 1: Maintaining the Status Quo
This scenario would see things remain as they are. North Korea will likely continue to test missiles into the Sea of Japan, resulting in the West condemning the acts as aggression towards powers in the region. In response, the West will continue to sanction the regime, which will likely have no effect on their ambitions to become a nuclear power, in addition to moving military assets around the peninsula and performing military drills to ensure they are able to strike in the event North Korea decides to move on the offensive. China will continue to engage with North Korea, and the West and its regional allies will remain unengaged, which has been the case since 2008 when the âSunshine Policyâ was terminated. This policy had been in place for ten years, and had increased political engagement betwee North and South Korea. Obama himself had a position of âstrategic patienceâ in dealing with the north, but that didnât lead to much progress in resolving the crisis. This scenario would allow time for a new game plan to be put in place on how to deal with the regime and would give time for the U.S. to design military scenarios if they chose to proceed with such an option. On the other hand, it would give North Korea more time to reach a stage where it can fit a nuclear warhead into a missile capable of striking powers in the region, including the United States. This scenario has a high likelihood of occurring.
Scenario 2: China pressures North Korea
Prior to President Xi Jinpingâs visit to the United States on April 6th, President Trump believed that China was not doing enough to reign in the North Korean threat. Just after their in-person meeting, President Trump continued to tweet regarding the situation, reiterating that China needs to do more, as well as reaffirming that the United States could resolve the issue alone, if China werenât willing to help.

Multiple phone calls with President Xi in the days that followed, seemed to have shown Trump that Chinaâs relationship with North Korea can only do so much, even with its economic power. China had suspended all coal imports from North Korea in mid-February, yet North Korea continued multiple missile tests in the months that followed. Rhetoric from Trump, following his phone calls seemed to have moved away from pressuring China, to instead sharing his belief that China would handle the situation properly.

With a change in tone from the President regarding Chinaâs willingness and ability, it could see more cooperation between the two nations to pressure the North Korean regime to curb its nuclear ambitions, but only time will tell if this approach is not only feasible, but whether itâs the chosen option. This would most likely be the preferred scenario for China, who would rather handle the situation diplomatically, rather than through military means, as they do not want additional U.S. military movements in the region, particularly with other areas of tensions in which both countries are a part of, such as the South China Sea.
Scenario 3: U.S. strike North Korea, Seoul feels the brunt
While the views that President Trump holds towards Chinaâs role in resolving this crisis have been more optimistic after his meeting, he still affirms that the United States would solve the crisis if China was unable to do so. A solution by the United States may be a military strike on the countryâs nuclear capabilities and missiles. A solution such as this is not only dangerous, but may also not be accepted by allies and other powers in the region. At risk in this plan, is the fate of Seoul. Seoul is only 35 miles from the border between the two countries, and the Seoul metropolitan area holds 25 million people, about half of the countryâs population. While the United States could most likely perform a surprise strike on North Korea to remove the nuclear threat, this would no doubt lead to a barrage of artillery fire from North Korea towards Seoul, and the launching of any missiles not destroyed in a U.S. strike, particularly those on mobile launchers. A retaliation on this scale would lead to mass casualties, and war on the Korean Peninsula. We have seen the impact that artillery fire can have on South Korea when in 2010, after South Korea was holding artillery drills into the sea, the north unleashed artillery fire on the island of Yeonpyeong, resulting in the death of 4 south Koreans, both military and civilian, as well as injuring 19.
This scenario is unlikely to happen because of the sheer amount of collateral damage which would occur, and the lack of support it would most likely get from regional powers. China would not support such a strike, because when the dust settles, two scenarios could occur, both of which would be detrimental to China. The first would be an influx of refugees from North Korea crossing the border into northeastern China. While China has propped up the regime with economic aid, it has done so to ensure that such a scenario does not occur. The second would be a reunification of the Korean Peninsula into one Korea, or even the invasion of North Korea by the United States and allies, to stabilize the country. This again would be detrimental to China, as it would allow the U.S. troops to be located on the land border in the northeastern part of China with North Korea. North Korea has acted as a geographical buffer zone for China, and therefore, China has ensured the regime does not collapse, while working with the international community to contain any threats from it, so that no one intervenes militarily.
The situation will continue to remain fluid in the coming coming weeks, and only time will tell what scenario may become reality, particularly if North Korea undertakes itâs 6th nuclear test.
Back to Reports & Resources