Munich Shooting Attack – What do we currently know? 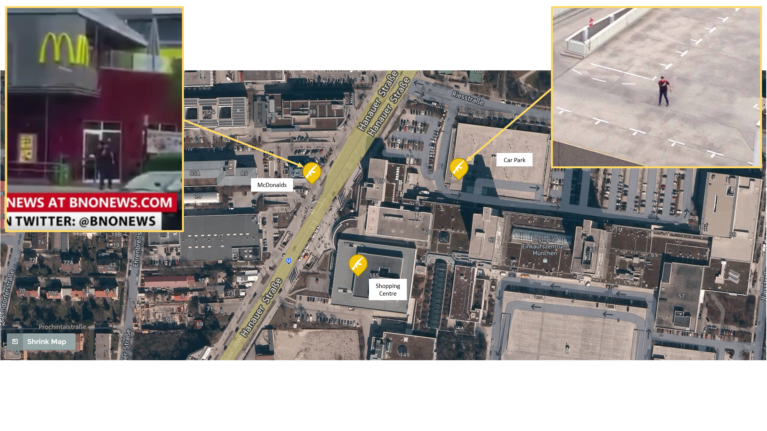 At 1750hrs, Ali Sonboly, an 18 year old German/Iranian hid in the toilets of the McDonalds on Hanauer St, before exiting and opening fire at people in the restaurant. COMMENT: He was likely hiding in the toilets so he could prepare his weapon before the attack. COMMENT ENDS Prior to the attack and posing as a teenage girl called âSelina Akimâ, Sonboly is thought to have used messages posted on a fake Facebook account to lure young victims to their death with fraudulent offers of free food just hours before his murderous rampage began. The attacker was armed with a Glock 17 pistol with 300 rounds. COMMENT: In the video where he exited the McDonalds and opened fire, when we count the shots, he appears to fire approximately 22 times without a long pause to reload, suggesting he may have had an extended round magazine. COMMENT ENDS
Reports suggest that Sonboly then moved to the local shopping centre and continued his attack. In his rucksack he had additional ammunition. Nine people were killed and 16 wounded (three critically) in the attack. Tourists are not included in the victims, only local people, including three females. Three of the victims were Turkish Germans and in Sonbolyâs exchange with the person on the roof of the parking lot, he stated âF****g Turks!. COMMENT: It cannot be ruled out that this attack has a link to Sonboly having a grudge against Turkish people. COMMENT ENDS The ages of the victims according to police chief are:
14 yr (3)15 yr (2)17 yr19 yr20 yr45 yr
It is believed that Sonboly then moved over to the roof of the car park on Riesstrasse. It is at this point where he was filmed engaging someone in conversation. Later the body Sonboly was found less than a mile from the mall with a self-inflicted gunshot wound to the head.
Police state there are no Islamic State related indications, however, police found documents relating to a shooting club and books on shooting. Furthermore the police did find computer materials and data, and are evaluating the data.
A former classmate of Ali Sonboly claimed Ali was bullied at school and that the teenager âalwaysâ promised revenge by âkillingâ his tormentors.
Back to Reports & Resources