Miguel Angel FÃ©lix Gallardo, known as âThe Godfatherâ was one of the founders of the Guadalajara Cartel. 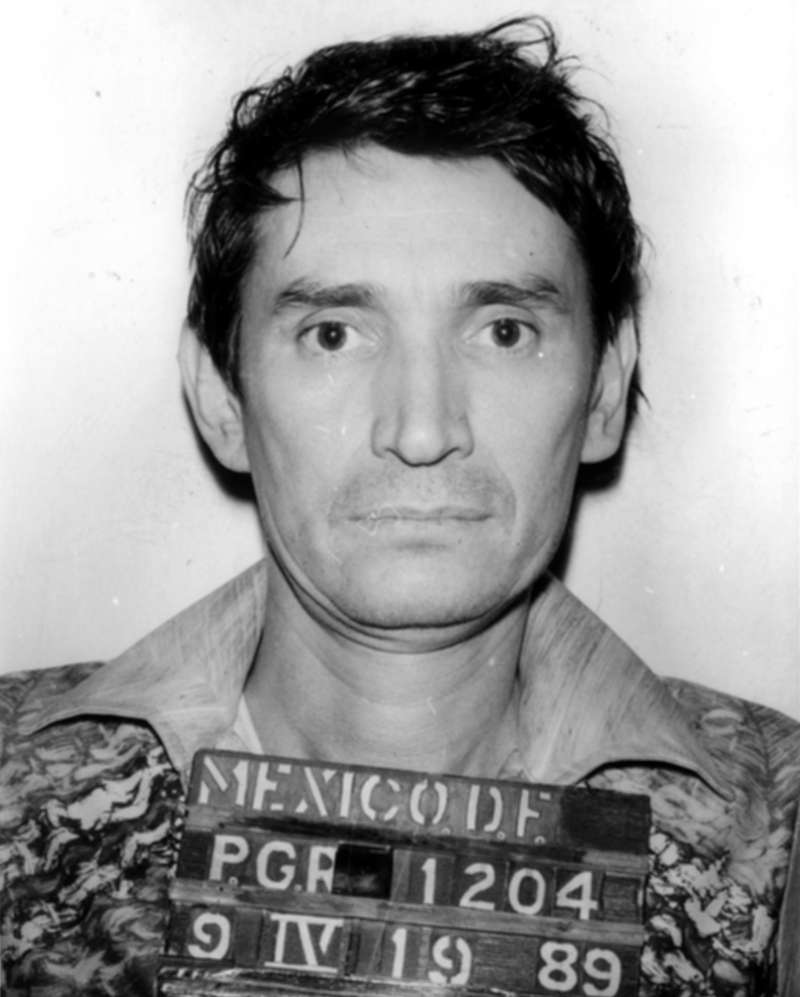 He was one of the first drug lords to spread drug dealing on a large scale in Mexico. At first, he worked as âmadrinaâ for the federal police, meaning he worked as a police agent who carries out espionage or other clandestine services. During the 1960âs he worked as bodyguard for the Governor of Mexico, Leopoldo SÃ¡nchez Celisâ children, at the same time he started drug dealing. Gradually, he grew his organisation which trafficked poppy and marijuana in the states of Sinaloa, Durango, Chihuahua, Baja California, Jalisco, Guerrero and Nayarit.
During the 1980âs the Guadalajara Cartel emerged becoming the most powerful cartel, by that time Miguel Gallardo had made contacts with Colombian criminal gangs. In the mid-1980âs a United States DEA agent, Enrique Camarena, was tortured and murdered by the cartel. Following this incident, the Mexican government focused on dismantling the Guadalajara Cartel. Miguel Gallardo split up his territory in 1987, creating other cartels to make the complete dismantling of the organisation difficult.
The Mexican Public Prosecutorâs Office has recently revealed that there are currently 36 criminal cells linked to nine different cartels which operate in Mexico. Anotnio Luigi Mazzitelli, representative of the United Nations Office on Drugs and Crime for Mexico, Central America and the Caribbean presented a report âÂ¿Mafias en Mexico?â in 2016 where he describes the origins and growth of Mexican cartels. He declared that five of the Mexican cartels are weaker than before due to internal fighting: Los Arellano FÃ©lix, Familia Michoacan, Caballeros Templarios, Juarez Cartel and Los Zetas cartel. The other three have ensured stability and security, and the one left, CJNG, is the strongest cartel nowadays.
The Cartel of Jalisco New Generation (CJNG)
It is the most prominent cartel today in Mexico. They recruit finance experts and well-connected people who have a US visa or contacts in the European Union.
ORIGIN: It was originally one of the cells under El Chapoâs control for Jalisco, Colima, MichoacÃ¡n and Veracruz, however it is now one of the most powerful Mexican cartels. According to Panama Papers, the groupâs leader, âEl Menchoâ was under the command of Ignacio Coronel (Sinaloa Cartel lieutenant) whose death caused a split in his Jalisco-based organization, as âEl Menchoâ wanted to take his place, however, did not and therefore formed his own cartel. CJNG has taken advantage of the serious blows dealt to other drug cartels (Sinaloa, Caballeros Templarios and Zetas) by authorities.
LEADER: Led by Nemesio Oseguera Cervantes, also known as âEl Menchoâ, former local policeman of Cabo Corrientes, a village on the coast of the Pacific Ocean. 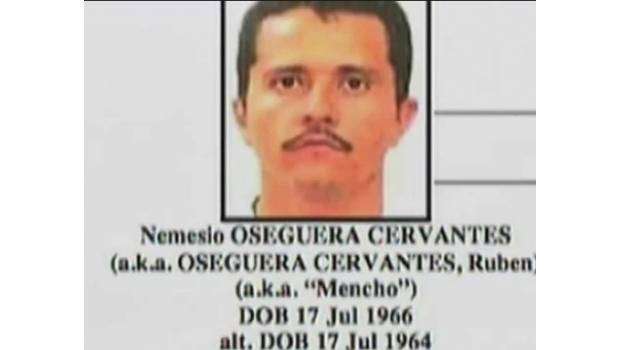 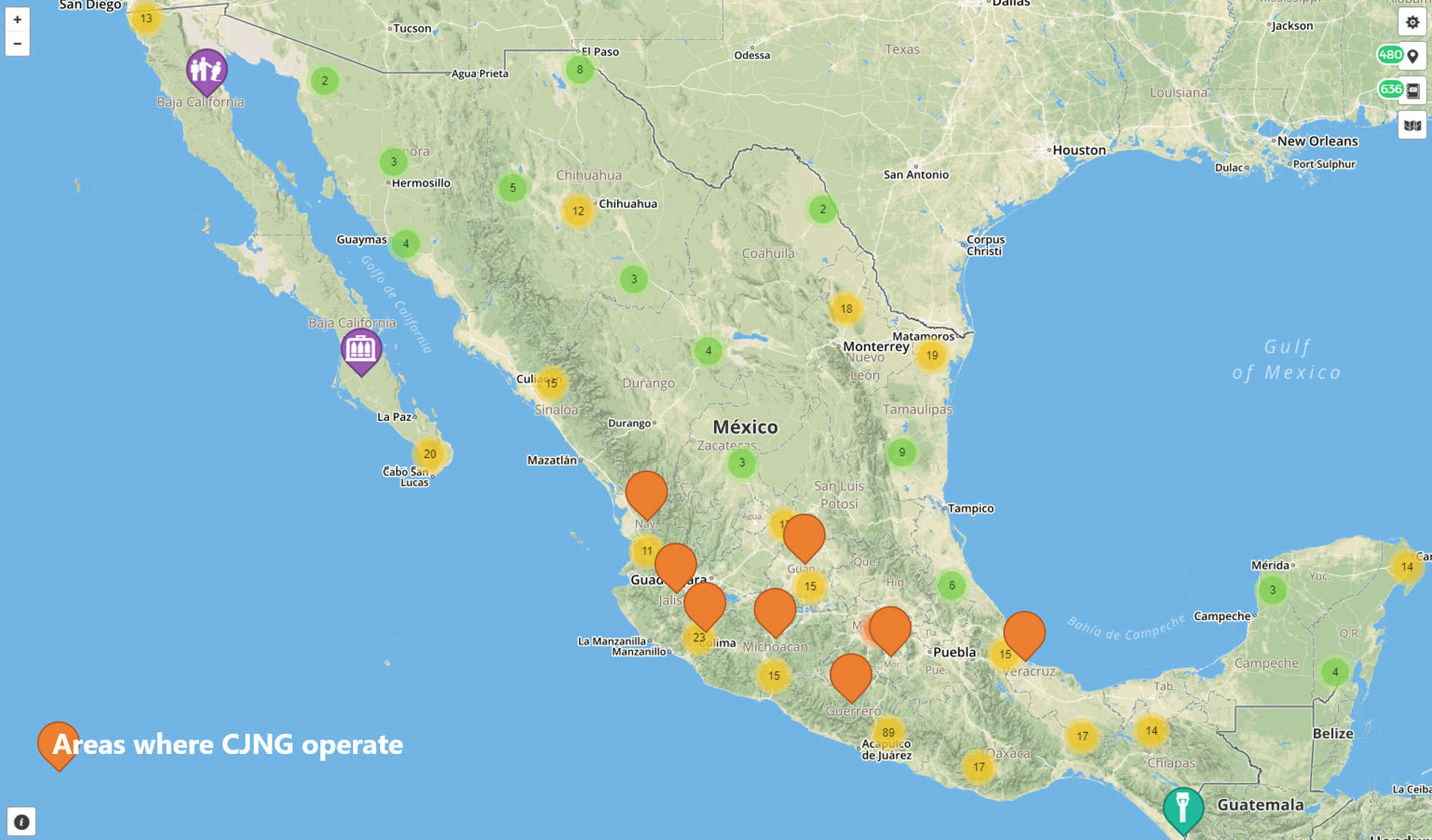 CRIMINAL ACTIVITY: Extortion, drug dealing and fuel-theft. CJNG imports drugs from China, Argentina and Chile entering Mexico as medicine.
KEY DATES:
April 2015, CJNG assassinated fifteen police forces at Puerto Vallarta â Guadalajara road.May 2015, The Cartel of Jalisco New Generation took down a military helicopter with a rocket launcher killing nine soldiers.August 2016, the cartel kidnapped one of the sons of âEl Chapoâ in August 2016, Jesus Alfredo GuzmÃ¡n Salazar, 29 years old. Considered both him and his mother by the US government as operators of Sinaloa cartel
**Los Cuinis: principal associate of CJNG has dealt in cocaine and methamphetamines since the 90âs. Their leader was Abigail Gonzalez Valencia who was arrested last February at Puerto Vallarta, Jalisco State, he was Nemesioâs brother in law.
The Cartel of Sinaloa (CDS)
It is one of the largest drug-trafficking organization in the world. They seldom seek confrontation with the state. One of the groupâs features is that the majority of its members are relatives or locals, therefore they share values and ethics giving the cartel more cohesion.
ORIGIN: Pedro Aviles Perez was one of the pioneer drug lords in the State of Sinaloa. He was killed during a skirmish with police in 1978. The second generation of Sinaloan drug dealers were Rafael Caro Quintero, Miguel Ãngel FÃ©lix Gallardo, Ernesto Fonseca Carrillo and JoaquÃ­n âEl Chapoâ GuzmÃ¡n. Miguel Ãngel FÃ©lix Gallardo, Rafael Caro Quintero and Ernesto Fonseca Carrillo founded Guadalajara Cartel. It was linked to Colombian cartels: Cali and MedellÃ­n cartel and Juan RamÃ³n Matta Ballesteros, also known as âDon Mattaâ or âEl Negroâ a drug dealer in Honduras who was the main intermediary between Mexican and Colombian drug lords. Guadalajara cartel is disarticulated nowadays
LEADER: Ismael Zambada GarcÃ­a, also known as âEl Mayoâ and Juan Jose Esparragoza Moreno, also known as âEl Azulâ. El Azul suffered a heart attack on February 2014, although it has been said that he is still alive. 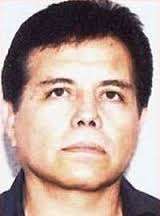 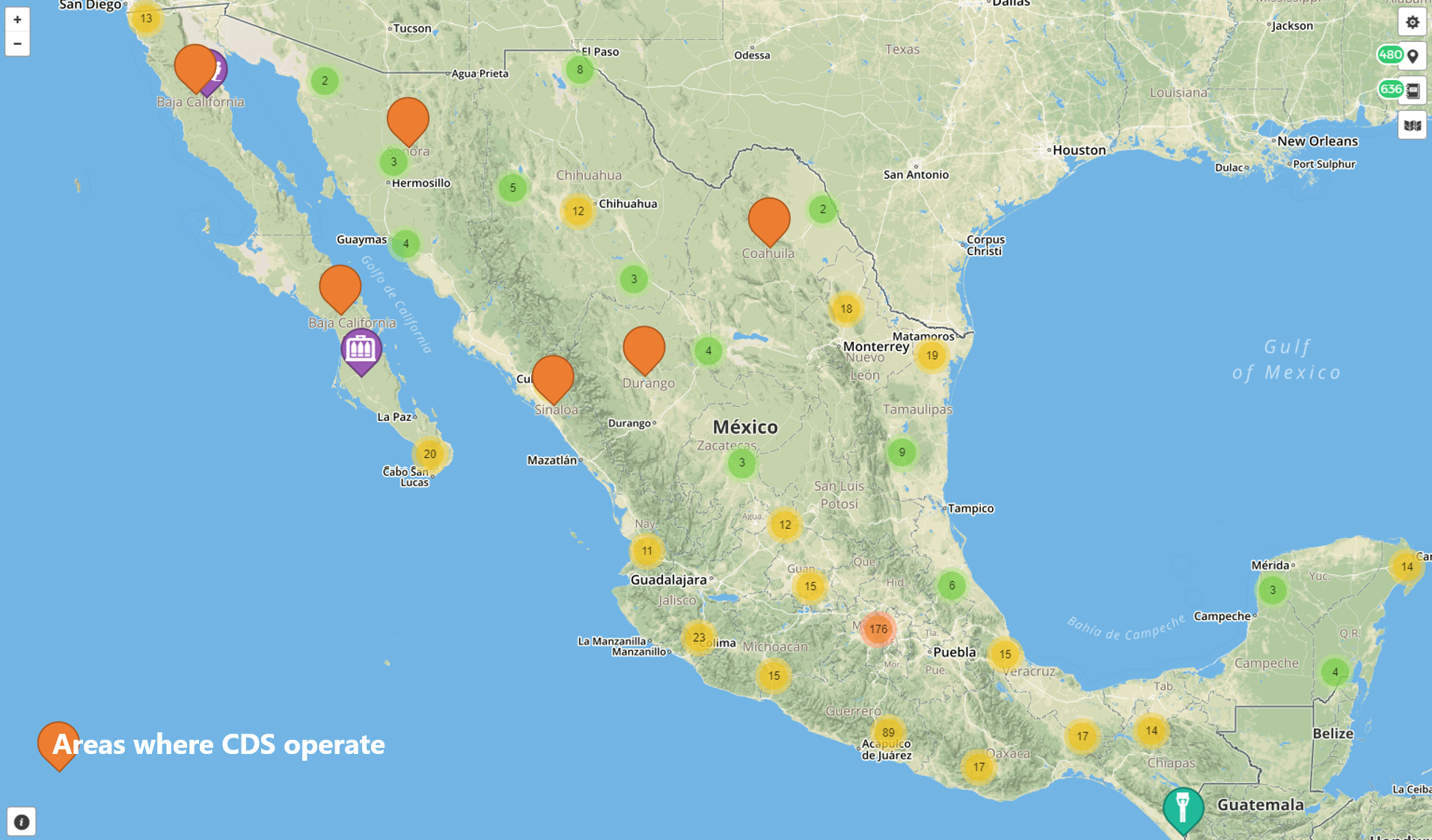 CRIMINAL ACTIVITY: Drug trafficking, money laundering, kidnapping and bribery.
The Cartel of Tijuana New Generation
ORIGIN: The Guadalajara Cartel broke up into two factions in the 90âs: the Sinaloa Cartel and the Tijuana Cartel led by the Arellano FÃ©lix brothers (also known the cartel of Arellano FÃ©lix brothers, CAF, for its initials in Spanish). During 80s and 90s it was one of the most violent and prominent cartels in Mexico. Since 2016, it has aligned with CJNG in order to form: the Tijuana Cartel New Generation (CTNG, for its initials in Spanish)
LEADER: – Juan JosÃ© PÃ©rez Vargas, a.k.a R7 or âAmarilloâ or âel PiolÃ­n was arrested in Guadalajara, Jalisco State on September 20th, 2017. 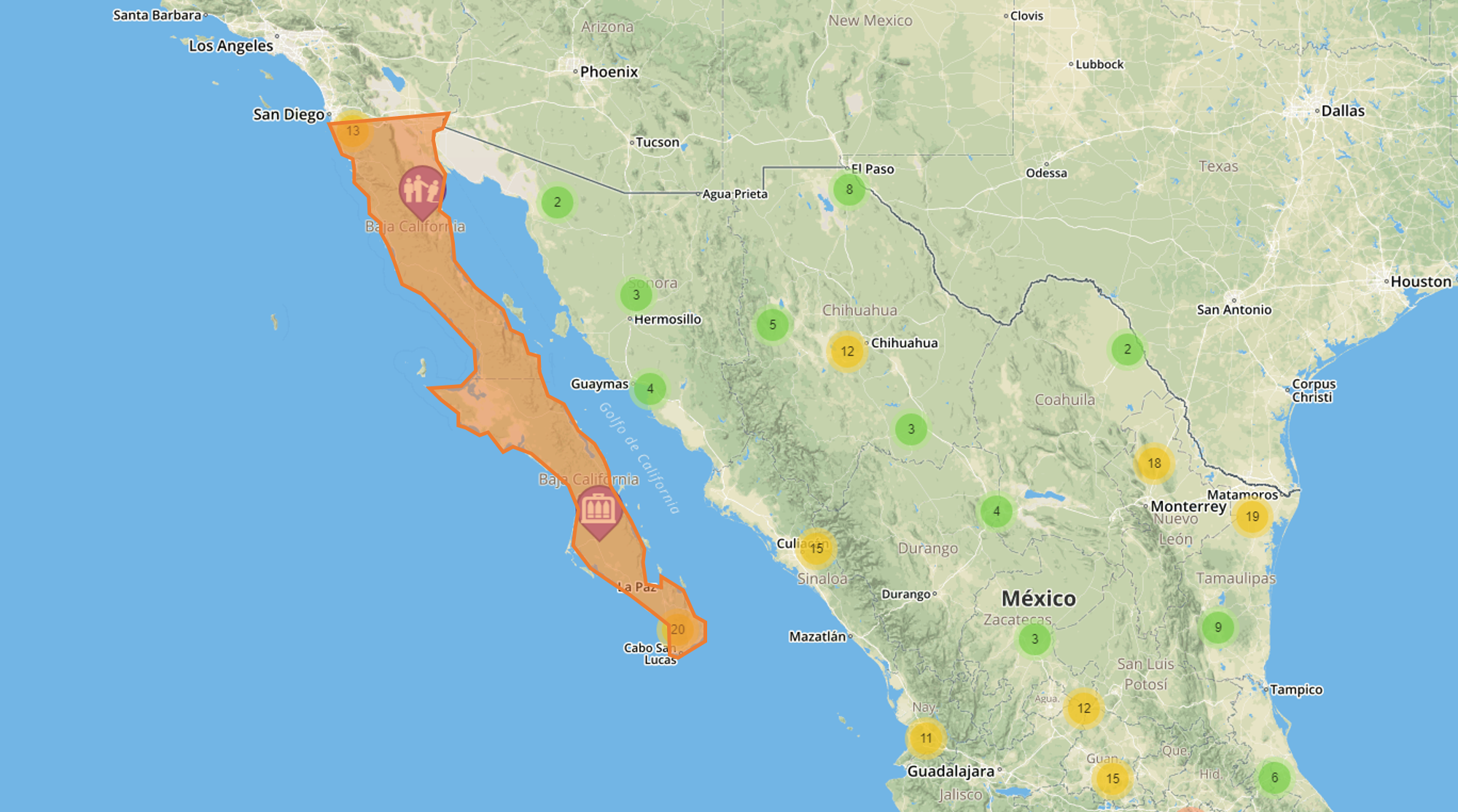 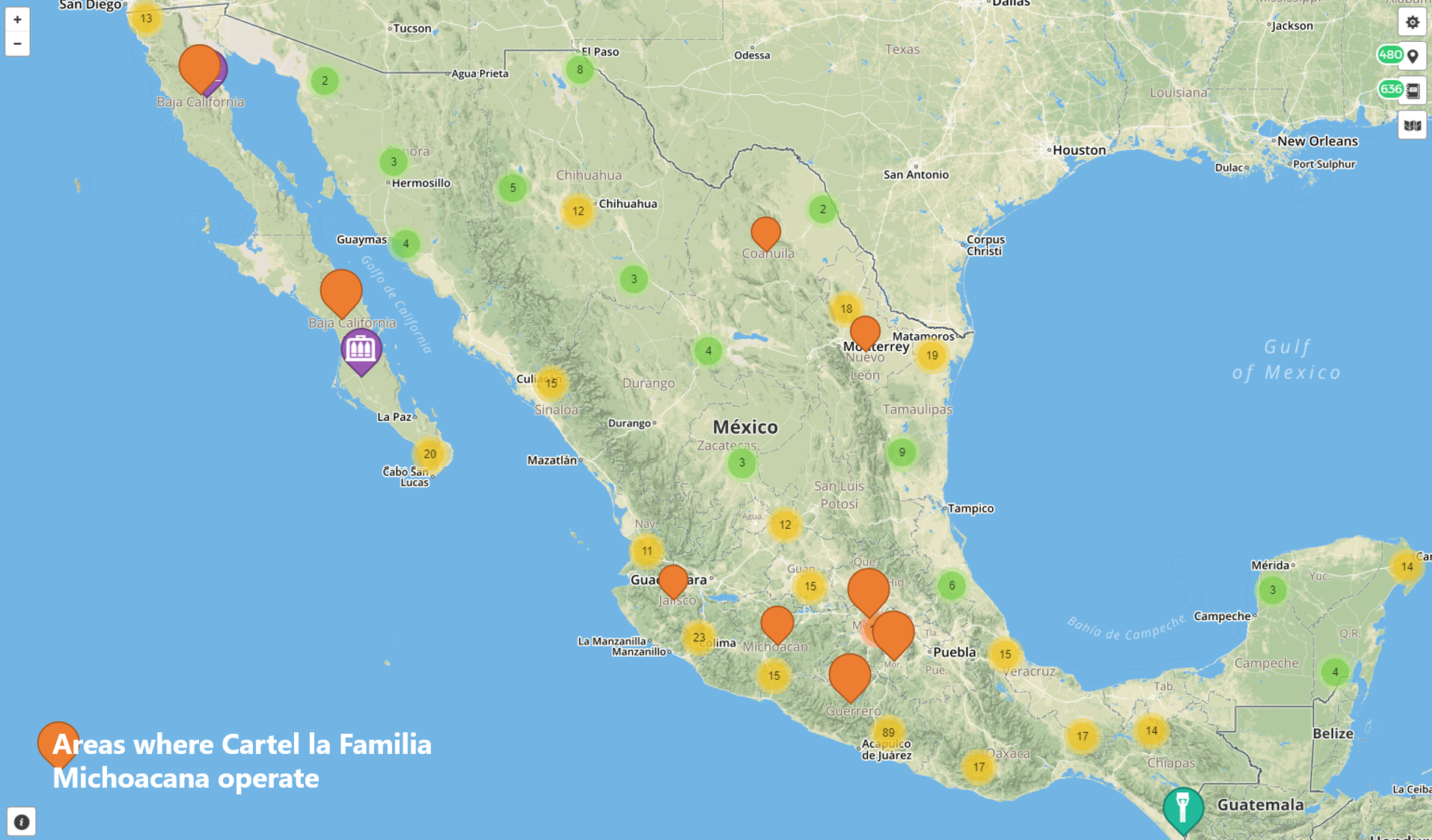 CRIMINAL ACTIVITIES: Money laundering, racketeering, arms trafficking, counterfeiting, police impersonation and drug trafficking.
The Cartel of Juarez or the Vicente Carrillo Fuentes Organization(OVCF)
ORIGIN: It was founded in the 80s and is one of the oldest and most powerful cartels in Mexico. The founder was Rafael Aguilar Guajardo who was killed in CancÃºn in 1993. His lieutenant, Amado Carrillo Fuentes, also known âEl SeÃ±or de los Cielosâ assumed cartelâs control. He died abruptly in 1997 during plastic surgery.
LEADER: October 2014, Vicente Carrillo Fuentes, better known as âEl Viceroyâ was arrested. Todayâs leader could be Juan Pablo Lezema, part of La Linea cell (militant arm of Cartel of Juarez) 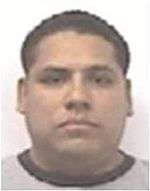 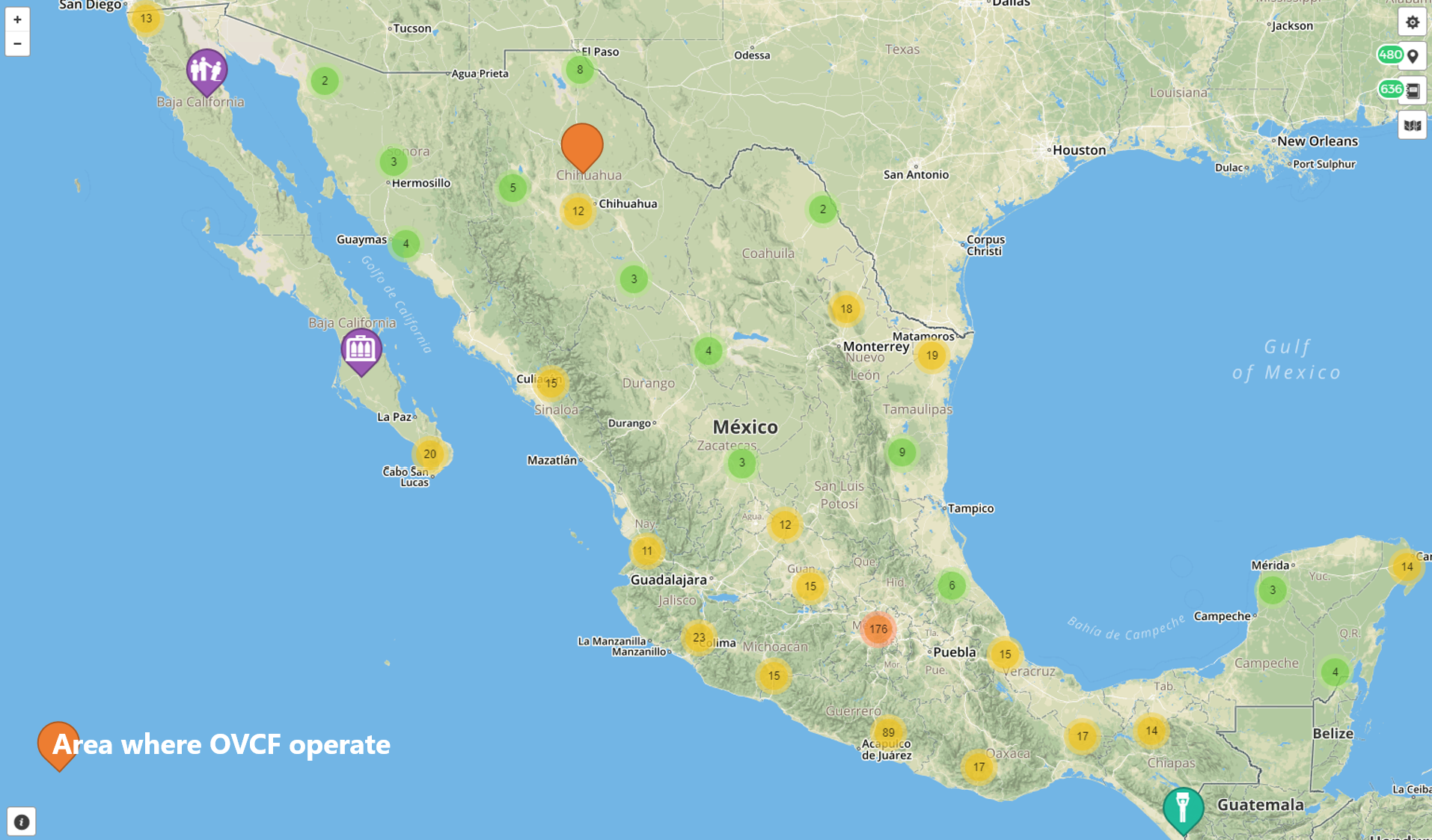 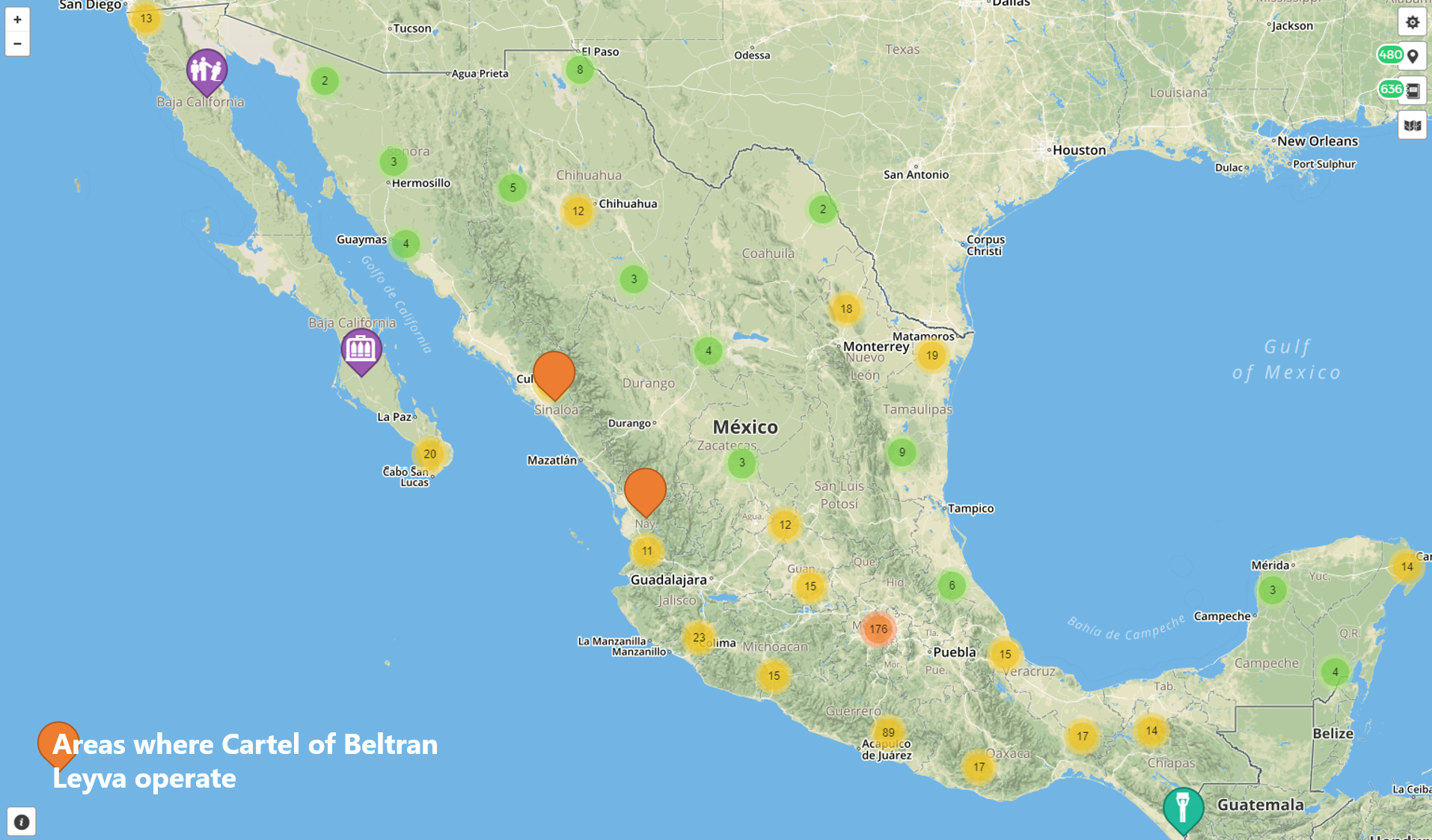 CRIMINAL ACTIVITIES: Drug trafficking, money laundering, burglary, arms and human trafficking.
**South Pacific Cartel: Mexican cartel composed of remnants of the BeltrÃ¡n Leyva cartel. His main area of influence is the State of Morelos. It is an active cartel despite Julio de Jesus Radilla Hernandez and Victor Valdez, his leaders were captured.
The Cartel of âLos Zetasâ o Cartel del Noreste (CDN).
It is a cartel based on meritocracy, they reward members based on achievements. One of its features is that they act as an intermediary. They buy in advance poppy harvest and import drugs from different countries.
ORIGIN: When Osiel CÃ¡rdenas GuillÃ©n took full control of the Gulf Cartel in 1999, he noticed that he was immersed in a turf war. Therefore, he sought out Arturo Guzman Decena (a.k.a Z-1, a code given to high-ranking officials) to create a group of personal bodyguards. Eventually, this group became an armed branch of Gulf Cartel composed of army deserters from the Mexican Armyâs elite âGrupo AeromÃ³vil de Fuerzas Especiales (GAFE, for its initials in Spanish). GuzmÃ¡n Decena was killed in 2002 by Mexican army forces, Heriberto Lazacano (also known as Z-3) took the control of the Zetas still part of the Gulf Cartel. In 2010, Los Zetas split from the Gulf Cartel and gave birth to a new cartel composed mainly by deserters of Mexican army.
LEADER: Mars 2015, Omar TreviÃ±o Morales (aka Z-42), arrested October 2016, Gerardo ElÃ­as Matamoros Garza, leader in Nuevo LeÃ³n State May 2017, JosÃ© Enrique Mendoza RodrÃ­guez, alleged Zetas cartel leader June 2017, David Rodriguez Dominguez, also known as âel Padrinoâ alleged leader of Zetas in Oaxaca State captured September 2017, Rafa GarcÃ­a, leader in Nuevo LeÃ³n
CELLS: Grupo Operativo los Zetas and Fuerzas Especiales Zetas
AREA OF INFLUENCE: Tamaulipas, Nuevo Leon and Coahuila State 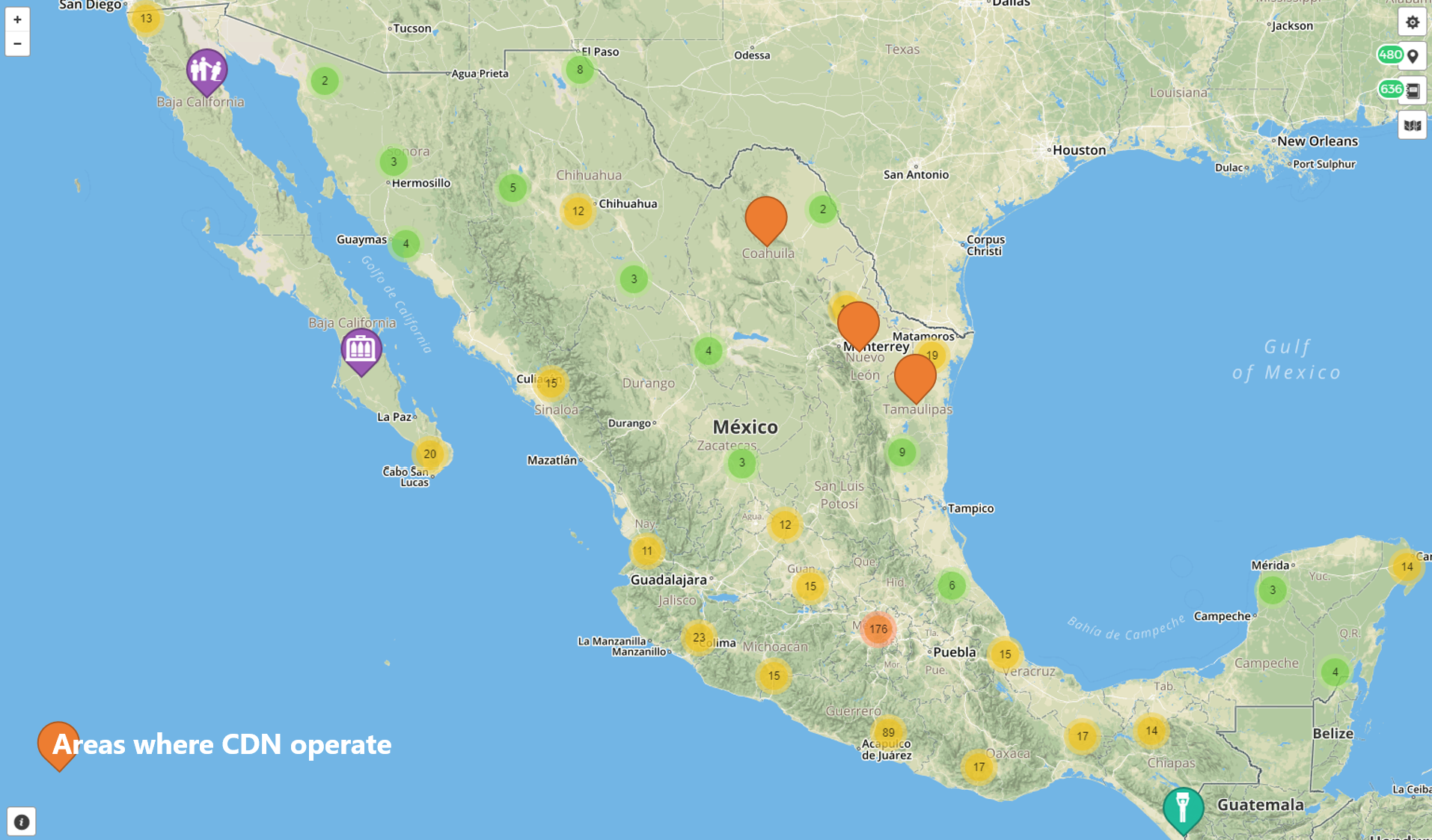 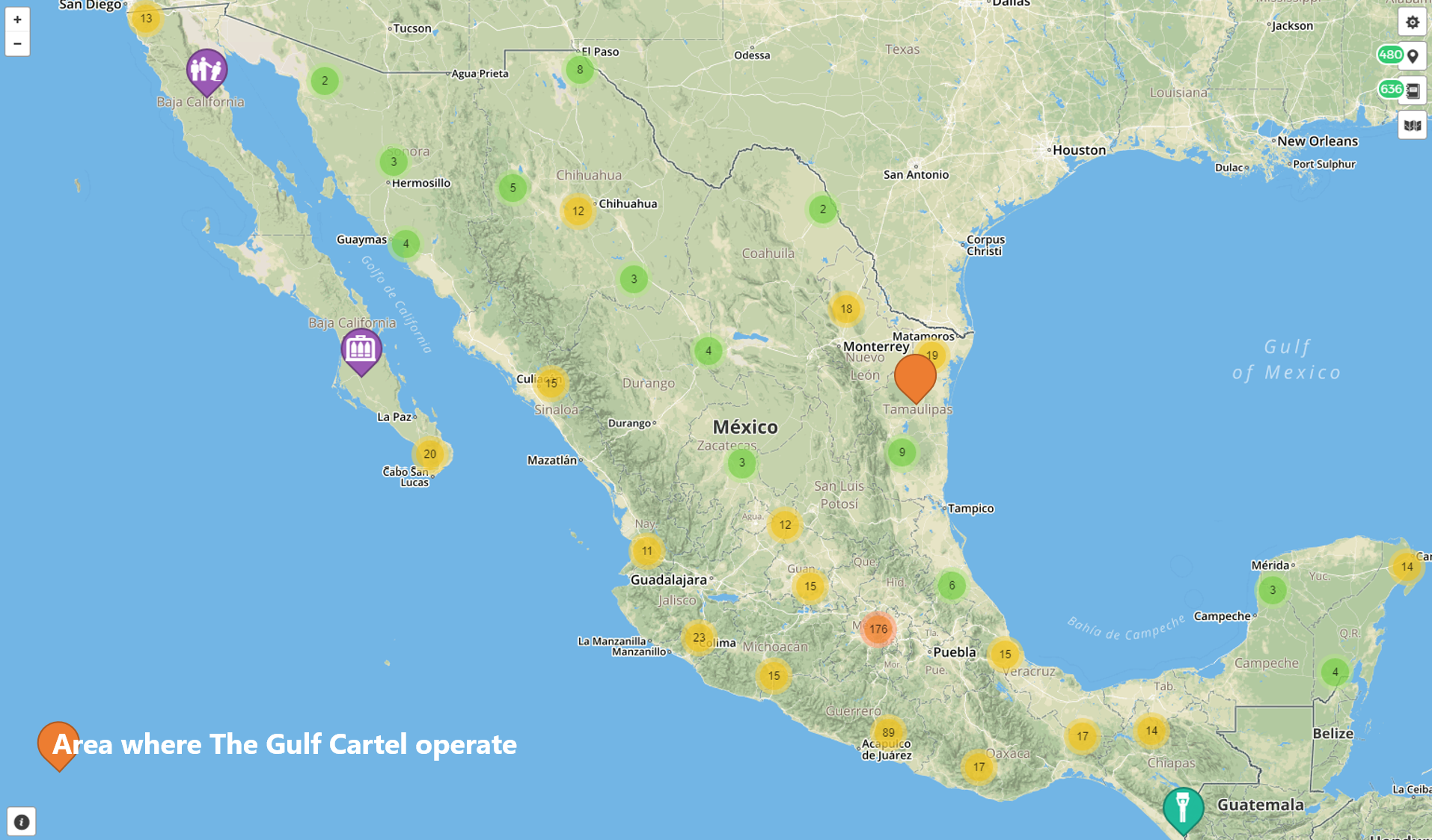 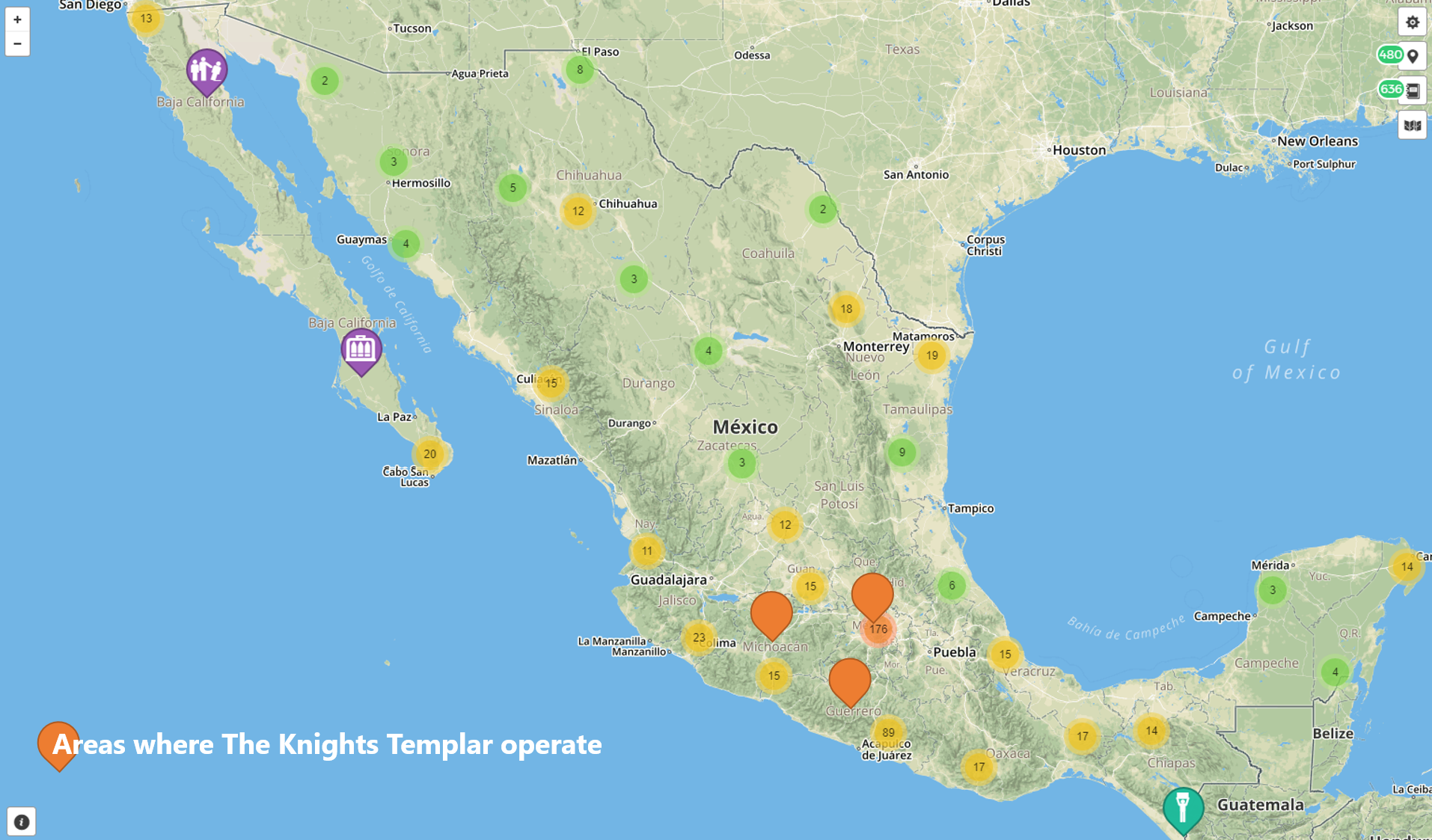