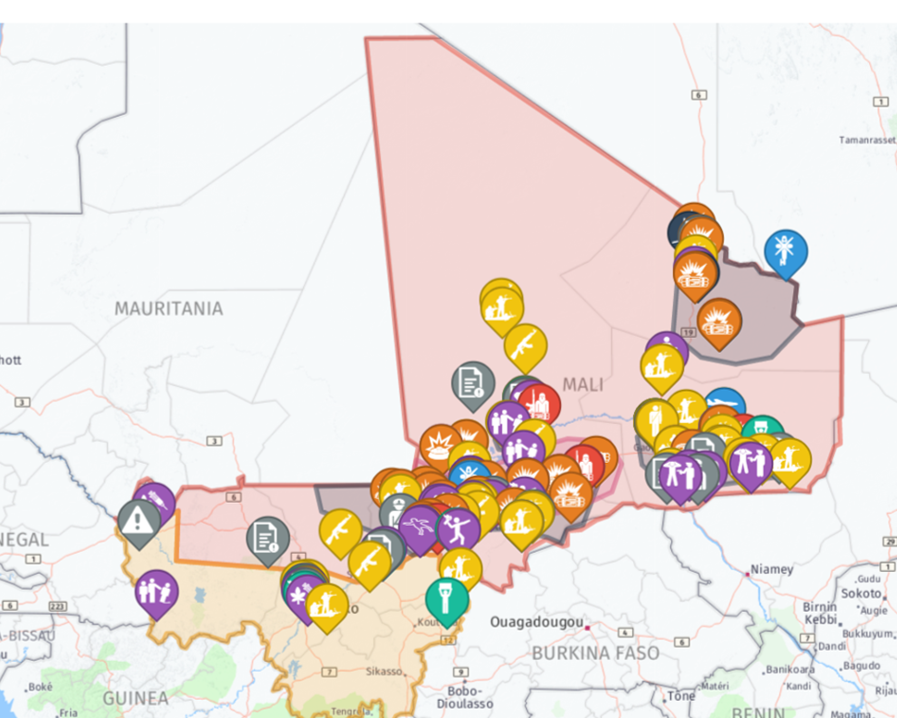 There are a plethora of driving factors that influence the security situation and consequently the operational environment in Mali. Not only are these related to macro and micro political, climatic and socio-economic conditions within Mali, but also – due to the porous nature of borders in the region – conditions in neighbouring countries. In their latest report, MINUSMA reported that the redeployment of state, judicial and prison officials to northern and central Mali has decreased since September 2017. It is reported that 6.5 percent of appointed officials are working from other jurisdictions due to the deteriorating security conditions. Worsening security conditions are one of the reasons as to why this is the case.
2018 is a crucial year for Mali. Regional, district and municipal elections are scheduled to be held in April, presidential elections in July and August and legislative elections in November and December. The Special Representatives, Annadif Mahamat Saleh, held meetings and organised workshops with key stakeholders aimed at preventing and mitigating potential election-related violence that could arise from growing insecurity, intercommunity tensions and limited state presence in Bamako, Gao, Kidal, Mopti, Ségou and Timbuktu. Challenges also remain in implementing the peace agreement. 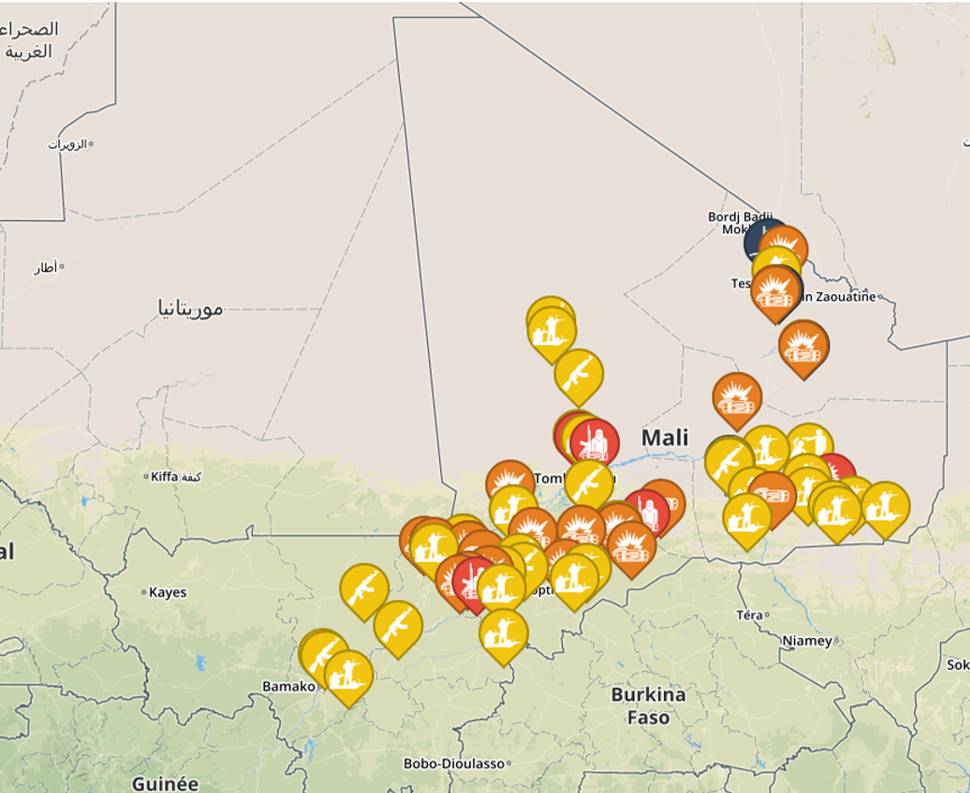 Between 01/01/2018 to 14/04/2018, most major incidents are concentrated in central and northern Mali, where most NGO and UN humanitarian operations are active.
Intercommunal fighting between the Dogon and the Peul ethnic groups around Koro dominated headlines in February and March. Inter-communal clashes are often triggered by murder, territorial disputes particularly linked to grazing and agricultural areas, and access to water and livestock. Fighting between the two communities led to nearly 3000 refugees fleeing into Burkina Faso. Jihadists also provoke or exacerbate inter-communal violence. Last month, MINUSMA expressed concern over inter-ethnic tension in Gao between the Arab and Songhai communities. The lack of territorial control and governance in central and northern areas of Mali contribute to continued insecurity and tension. According to UNOCHA, insecurity, a lack of rainfall and insufficient funding are the main causes of the deterioration of the humanitarian situation. A high level of terrorist and criminal group activity remains in the central and northern border regions of Mali. Although unverified, it is reported that local journalists claim insecurity prevents people moving from village to village in and around Ménaka.

In the space of four days in 8-11th April 2018, six NGO vehicles were stolen. According to the UN, such incidents are common. 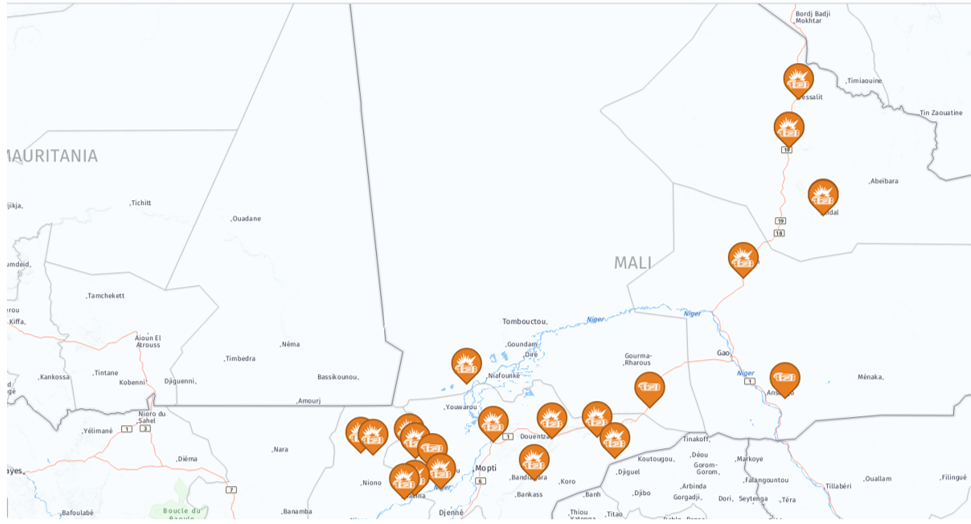 From 1st January to 30th March 2018, the Human Rights and Protection Division of MINUSMA has documented at least 85 major violent incidents and armed confrontations that have resulted in at least 180 civilian casualties, including 15 women and 17 children. The most affected circles are Tenenkou, Youwarou, Koro, Douentza, Djenné and Mopti (in the Mopti region) and Niono and Macina (in the Segou region). 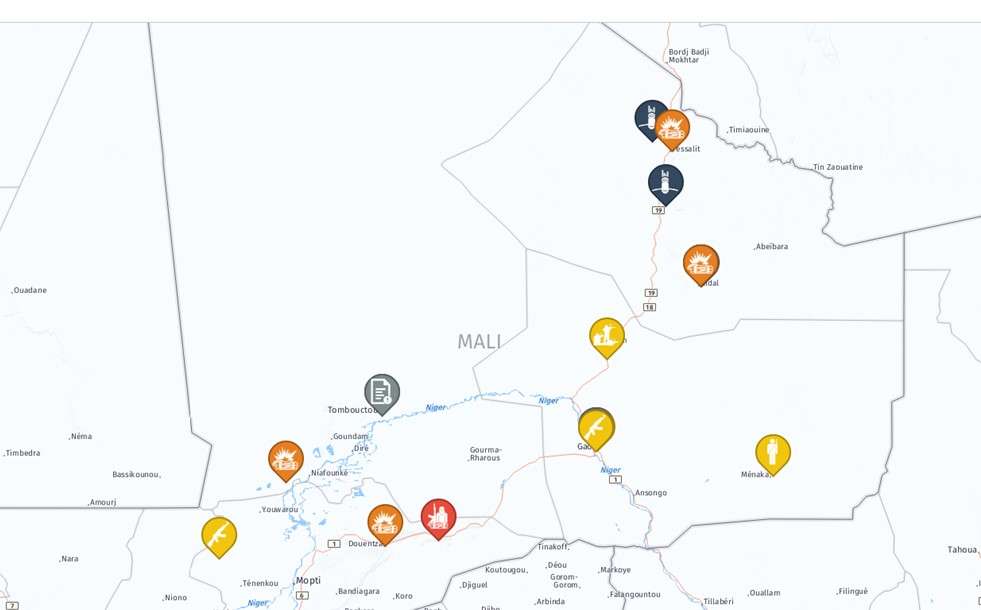 MINUSMA have voiced concerns about a shortfall in personnel and equipment such as APCs (armoured personnel carriers) and MPVs (mine protected vehicles) and the impact this is having on their operations.
While attacks on MINUSMA are not new, their lethality has increased. Following a mortar attack on a MINUSMA camp in Aguelhok earlier this month, MINUSMA officials noted terrorist groups are using mortars and heavy weapons more effectively and that attacks are increasing in complexity. The complex attack on the MINUSMA base in Timbuktu on April 14th was “unprecedented”. One peacekeeper was killed, twelve French soldiers were wounded, nineteen FAMa soldiers were wounded and fifteen attackers, at least some of them wearing suicide belts, were shot dead. The attackers intended to detonate two SVBIEDs, one vehicle with a UN logo and another with FAMa insignia, however one was neutralised by UN/French forces. This was the fifth attack on MINUSMA in April. Approximately 105 peacekeepers have been killed in hostile acts up to April 14th this year since the peacekeeping mission began in April 2013.
The use of mortars by jihadist groups in Mali is not new. However, their use has greatly improved. Mortars offer those employing asymmetric warfare tactics a number of advantages: lethal indirect fire at a high fire rate, range, are logistically easy to carry, can provide its users with operational and/or tactical depth. Jihadist groups that have targeted MINUSMA bases are known to have used 60mm and 81 mm mortar rounds, according to CAR. While ranges vary, a 60 mm mortar round generally has an effective range of over 1000 metres.

Following an attack on the La Falaise Hotel in Badiangara, local journalists noted the indiscipline demonstrated by Malian soldiers and security forces while on duty (use of phones, playing cards, socialising) as being one of the reasons why many attacks by armed groups are successful. They note the detrimental effect such attacks have on the population and their confidence in state security forces to protect them.
The 5000 strong G5 Sahel force is expected to become fully operational in the coming months – their area of operation mainly in border regions in the Sahel. While the force’s effectiveness remains to be seen, the force could have a constricting effect on the movement of terrorist/criminal groups and so terrorist groups are likely to increase attacks in Mali and possibly other countries in the Sahel to cause destabilisation and division. Moreover, with presidential elections approaching and, broadly speaking, remaining uncertainty surrounding the implementation of the peace agreement coupled with aforementioned underlying factors such as economic problems, the effects of climate change and the capacity, evolving tactics employed by terrorist groups, strength and resilience of state institutions, 2018 will bring new challenges to the operational environment in Mali.
Back to Reports & Resources