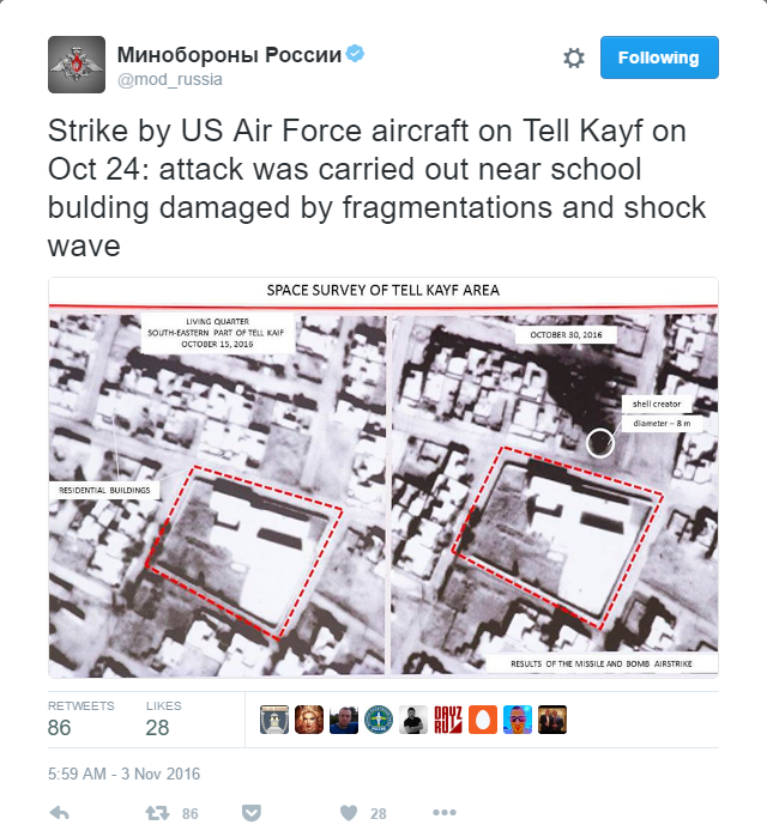 The Russian Ministry of Defence tweeted that on October 24th the US Air Force had damaged a school in Tall Kayf, a small town north of Mosul, in an airstrike. Spokesman Sergei Rudskoy has claimed the attack left casualties.
âThere are new cases of [US-led] coalitionâs airstrikes on civilian targets. On October 24, the US Air Forceâs tactical aircraft launched missile and bomb strikes on a school building in the village of Tall Kayf, 14km north of Mosul at 3:35am. As a result of the strike, there are dead and wounded,â said Lt. Gen. Sergey Rudskoy, chief of the Russian General Staff Main Operational Directorate.
We can use this airstrike to demonstrate some of the open source intelligence techniques which go into generating an Intelligence Fusion incident report. 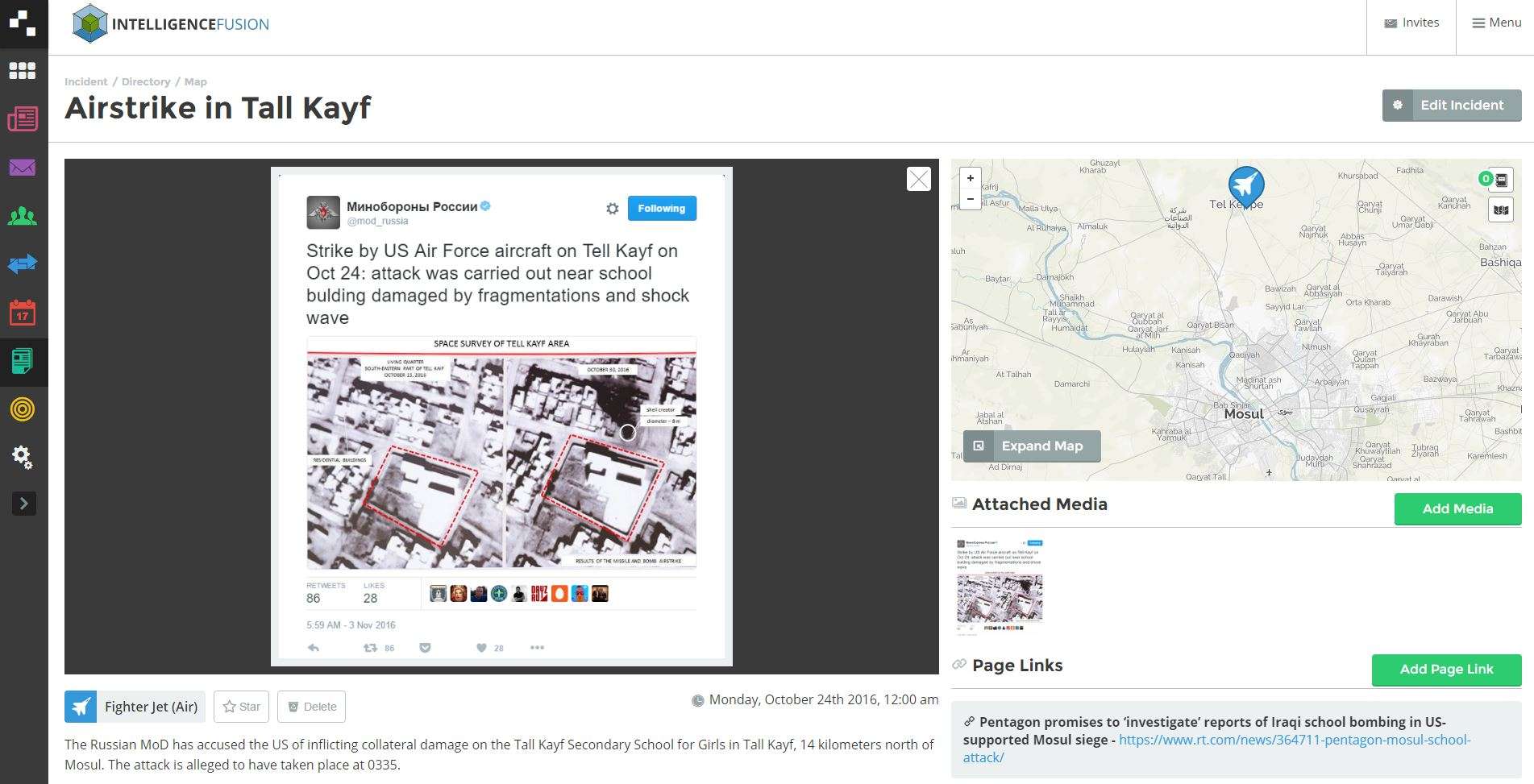 First, we want to geolocate the airstrike impact. Tall Kayf is easy enough to find, as it is the first town north of Mosul. The building in the image is a little harder. Google Earthâs images of the town are from before the school was built. Intelligence Fusionâs satellite map, however, did have an image of the building. The building has a distinctive shape and much larger than surrounding buildings. The tweeted image is also north-oriented, which made looking for the road pattern easier. 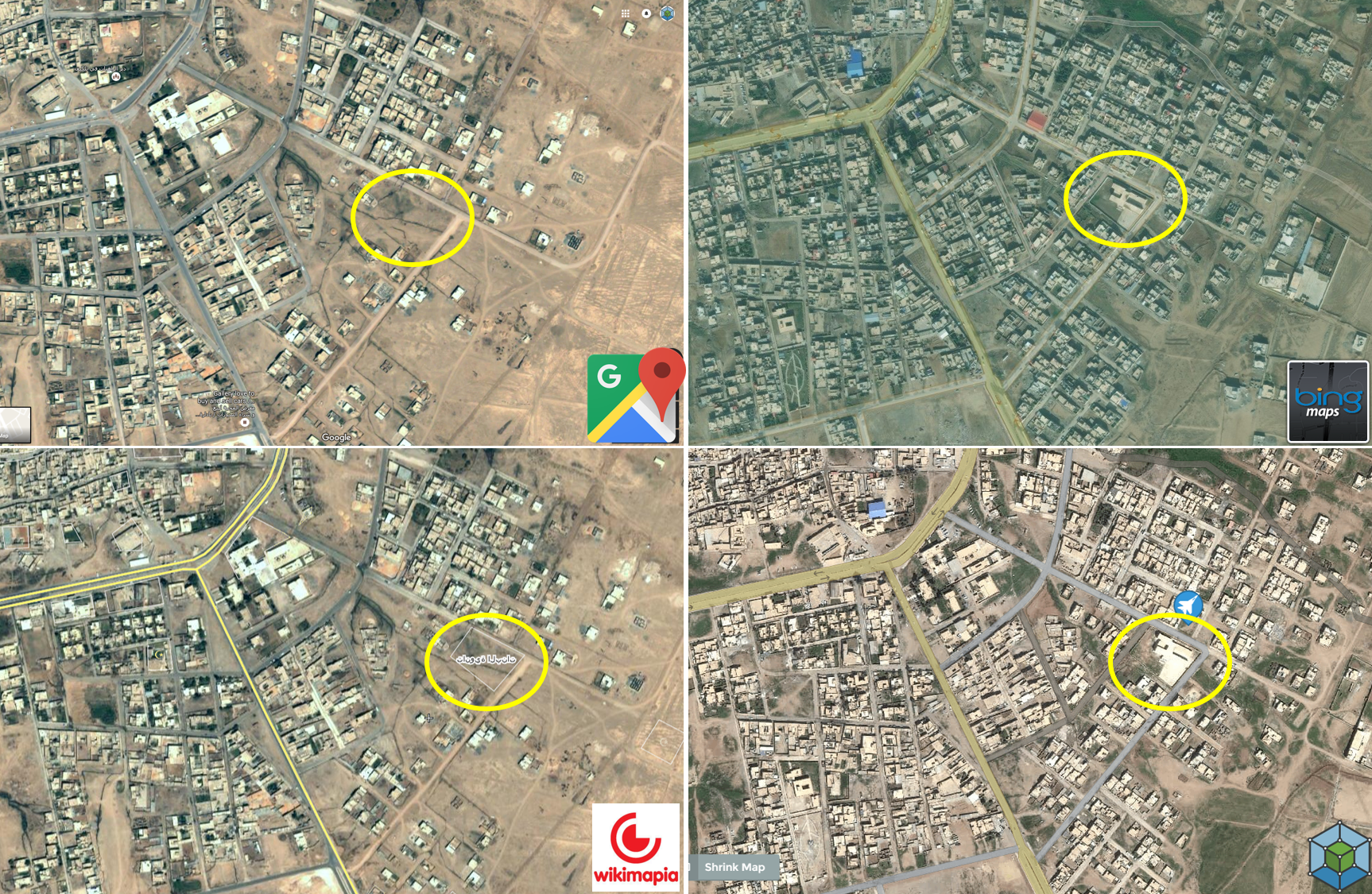 With this done, Wikimapia tells us the school is for âminor girlsâ. 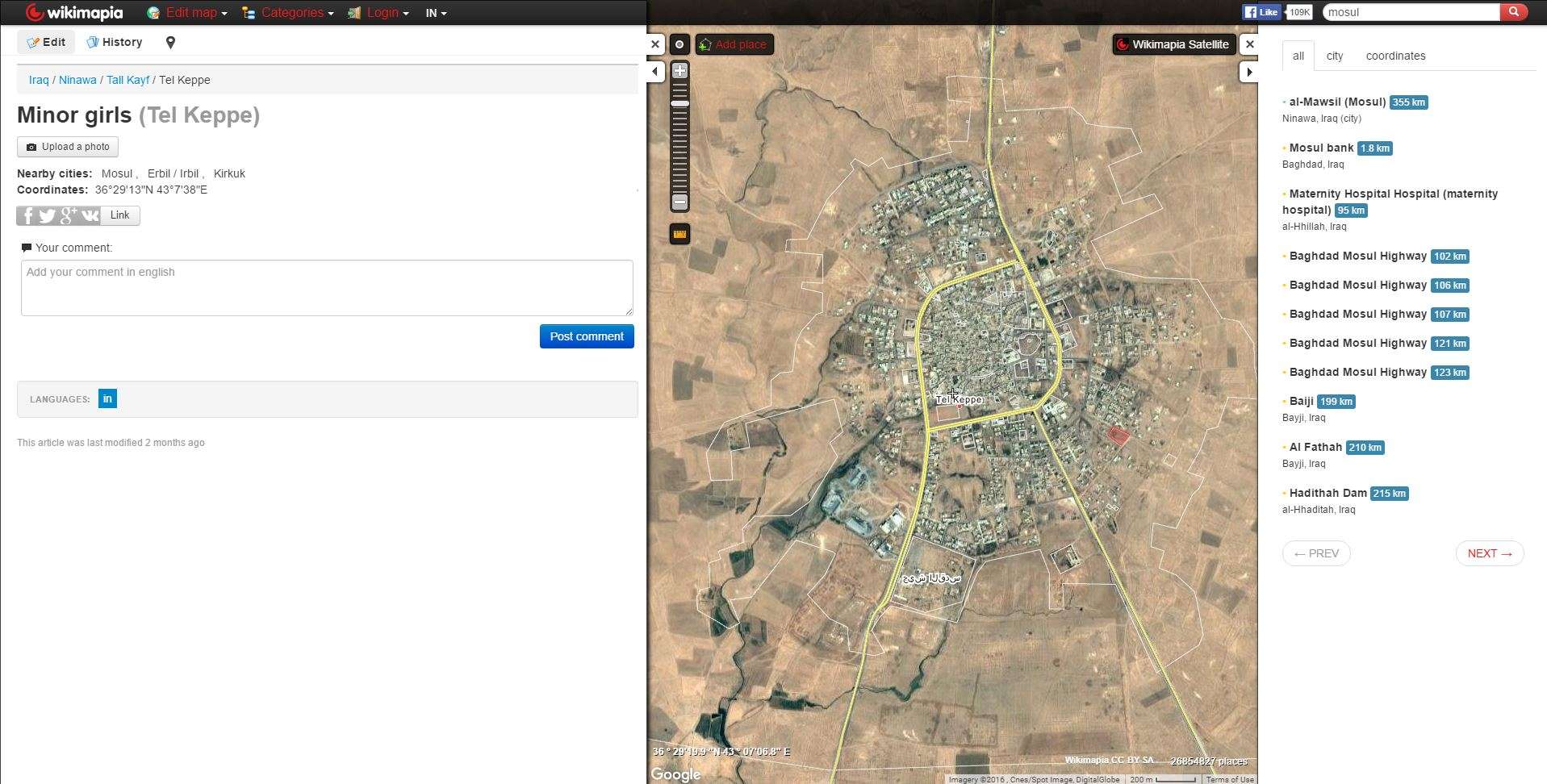 Google searching for variations on the spellings of Tall Kayf and combinations of âgirlâs schoolâ leads us to http://archive.defense.gov/news/newsarticle.aspx?id=28231, a news story about the 101st Airborne helping to reopen the school following the 2003 invasion. Wikimapia crowdsources its building descriptions so anybody could retroactively mark the building as a school to further an agenda. The article confirms this has not happened. 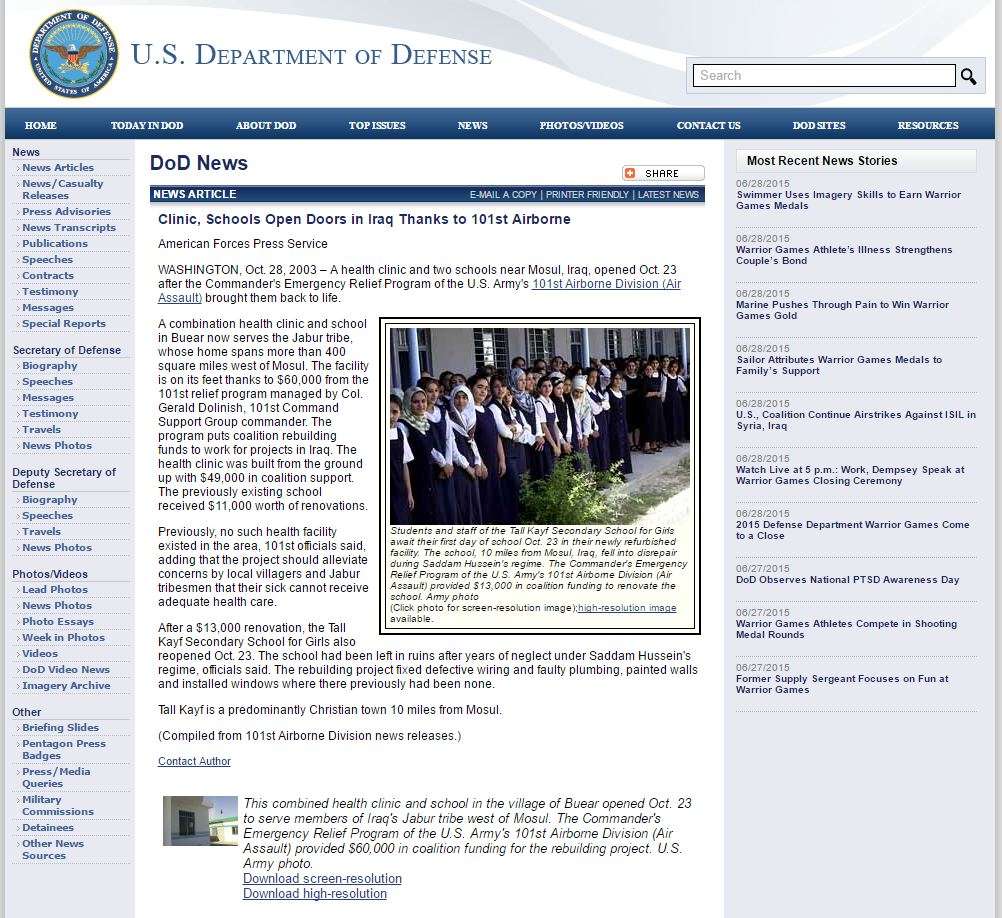 This is enough to reasonably assert that there has indeed been an explosion near a school in Tall Kayf. However there is still one problem: the MoD stated the attack took place on October 24th. The satellite image serving as evidence for this is dated October 30th. The image shows a thick column of smoke. The Russian MoD has even helpfully shown this was the case as of October 15th. So what was moved into the area between the 15th and 24th that, if bombed, could burn fiercely for six days, ready to be photographed on October 30th? This suggests that the MoDâs information may be incorrect. 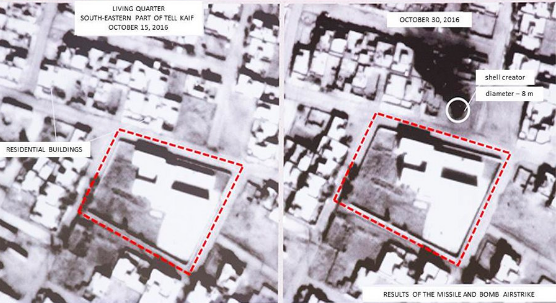 The Operation Inherent Resolve airstrike report from October 25th listed:
Near Mosulâ¦ five strikes engaged an ISIL tactical unit and two rocket positions; destroyed 22 fighting positions, eight vehicles, eight tunnels, seven mortar systems, six rocket rails, three heavy machine guns, three rocket systems, two light machine guns, two command and control nodes, a VBIED, a communications tower, an ISIL-held building and a mortar cache; and damaged a mortar system.
The images released by the Russian MoD clearly show the school was not destroyed. This leaves two options: either the school was the target of the airstrike but the attack missed, or the intended target was elsewhere. The former seems unlikely. If the school was the target and the strike missed, why not try again? Furthermore the bombed patch of earth opposite the school looks like a good place to dig a mortar pit or equivalent, suggesting the airstrike hit its target, and its target was not the school.
Finally, with the exception of Lt. Gen. Rudskyâs statement, there is no evidence of casualties, civilian or otherwise, available from any open sources. It should also be noted that the Russian MoD might be happy to distract from allegations of civilian collateral damage due to the Russian intervention in Syria.
In conclusion, we can confirm that there has been an airstrike: the Pentagon stated it would investigate the airstrike, rather than denying the possibility of damage and casualties. The strike report also states there were airstrikes near Mosul during the week of this particular airstrike, and during the week of fighting around and for Tall Kayf. We can also confirm there building shown near the crater is a school. Beyond this, the allegations are difficult to confirm. We cannot independently verify the existence and affiliation (civilian or not) of casualties inflicted in the strike. There is also the question of the six-day fire, which casts doubt on the quality of the evidence deployed by Russian MoD.