Executive Summary
– At 2158hrs on 3rd Jun 2017 a van ramming and sustained knife attack occurred in the area of London Bridge and Borough Market.
– From the initial report of a terror attack, it took 8 minutes for the terrorists to be shot and killed by the Metropolitan/City of London Police.
– At present seven people have been killed and 48 injured in the attack. Six of those killed died at the scene.
– Attack is not believed to be linked to Manchester Arena attack, however, was likely a copycat attack with the terrorists being inspired by the events.
Incident Map

Click on above image to expand incident map.
Timeline of Incident
– 2nd June: The Barking attacker who wore an Arsenal shirt, asked a neighbour where he could hire a van. COMMENT: This appears to suggest that the attack has been prepared hastily with as little as 24 hours preparation. COMMENT ENDS
– 3rd June 2158hrs: The terrorists use a Hertz/B&Q rental van to ram pedestrians on London Bridge. The men drove the vehicle in an S shape cross the bridge at 50mph, running over 20 pedestrians. The vehicle crashes near the Barrowboy and Banker Pub in Borough Market. 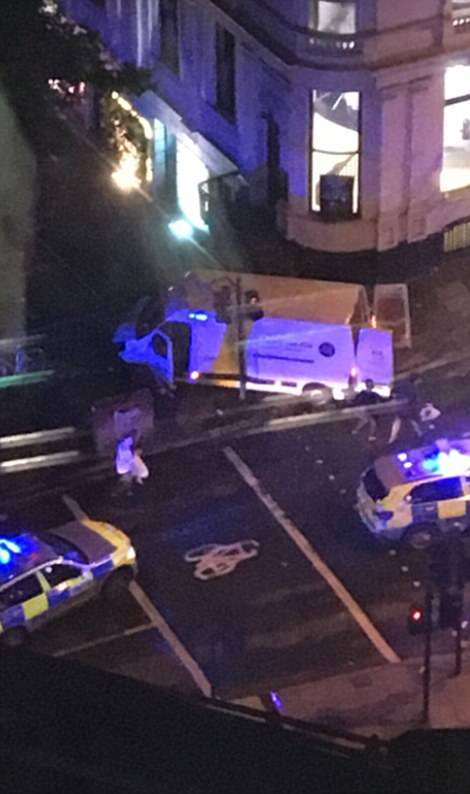 The crashed van near the Barrowboy and Banker pub.
WARNING GRAPHIC: Video shows aftermath of the van running down pedestrians on London Bridge.
– 3rd June 2208hrs: Police reportedly received first reports of the incident.
– 3rd June 2158hrs – 2216hrs:
– The three men get out of the crashed vehicle and begin stabbing people randomly using 12 inch hunting knives shouting, “This is for Allah”. Witnesses describe seeing victims with their throats slit and people fighting off the attackers with pint glasses.
– An on duty British Transport Police officer who responded to the attack and while protecting bystanders, was one of the first victims. The officer was in the area of London Bridge Station and armed only with a baton.
– One eye witness Gabriel Sciotto was walking down Park Street , he saw them run in the opposite direction into Borough Market. “There was one policeman there, inside Borough Market. He was trying to scare them away. They ran towards me because the police officer was trying to chase them.The three men ran out of Borough Market and turned left into Stoney Street towards the Wheatsheaf pub. Suddenly lots and lots police came from the other direction. There was a lot of shouting. ‘Stop, stop, get on the floor’, stuff like that. Then the police shot them.The policeman in Borough Market, he was trying to make sure that no one was hurt. He was trying to get them outside. The police reaction was very quick.”
– Journalist Geoff Ho was stabbed at the Southwark Tavern before being rushed to hospital. 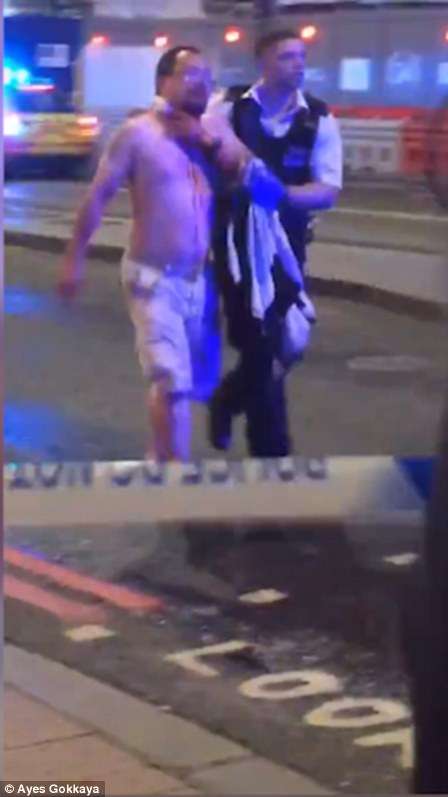 Image believed to show Geoff Ho with a stab wound to his neck.
– Some people attempted to stop the attack by throwing objects at the men.
Eyewitness account of Borough Market attack.
– Report of doormen barring the doors of their pubs to protect those inside.

Police told drinkers in the German-themed bar Katzenjammers to get under tables.
– 3rd June 2216hrs: Armed police shoot dead all three attackers in the area of the Wheatsheaf Pub in Borough Market. A total of eight armed officers fired 50 rounds of ammunition to kill the terrorists. A member of the public was also injured in the gunfire, and is being treated in hospital.

Images of the dead terrorists.
– 3rd June 2300hrs: An unrelated stabbing occurred in the Vauxhall area, leading to Vauxhall Station being evacuated.
– 3rd June: 20 people were treated at the Andaz Hotel near Liverpool Street Station.
– 3rd June: An Asian male in his mid-30s was arrested by police in the Southwark area. He was described as about 5ft 6in, dark hair, mid thirties with stubble. wearing a dark jacket.
– 4th June 0700hrs: Police raid a block of flats in Barking, East London arresting 12 people, including numerous women. 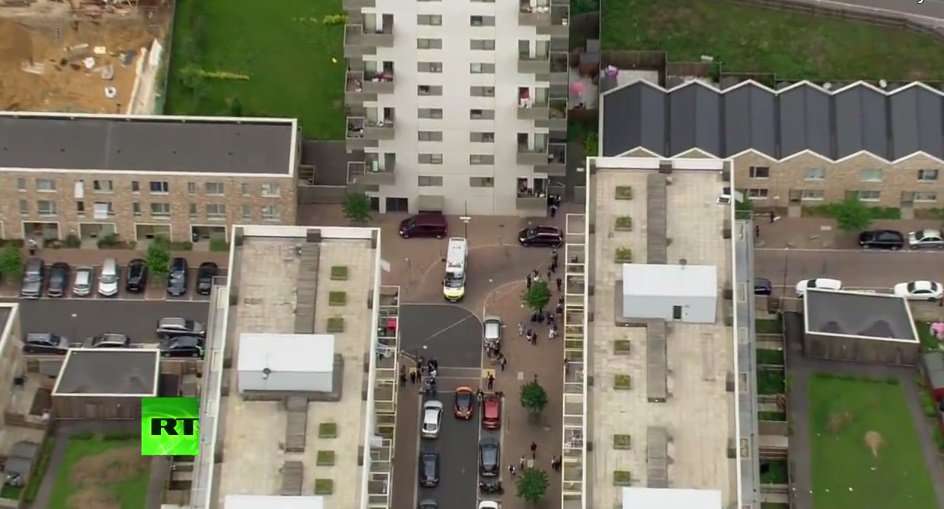 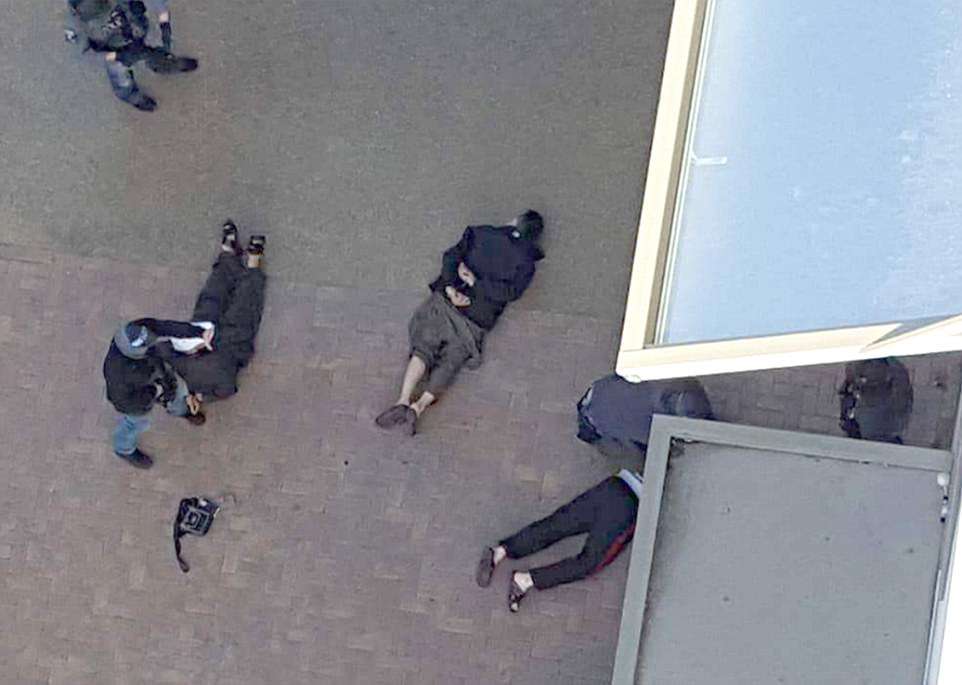 Men arrested at the block of flats in Barking, East London.
– 4th June 1400hrs: A police raid was also conducted in the East Ham area of London in relation to the attack.
Profile of Attackers
Attacker 1 – Rachid Redouane, 30 years old. Wore a striped jumper. Lived in Barking area. 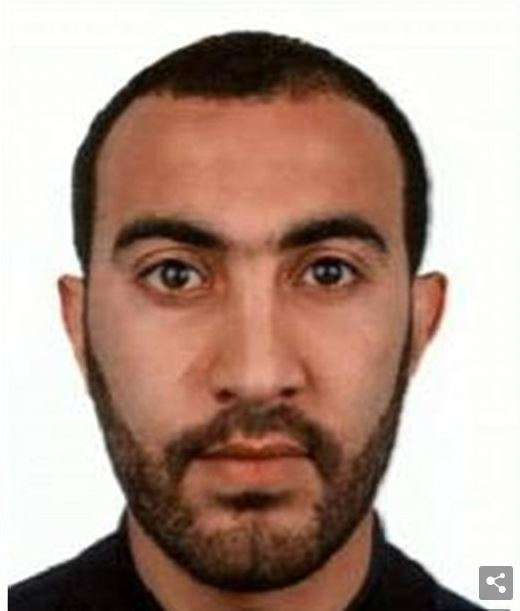 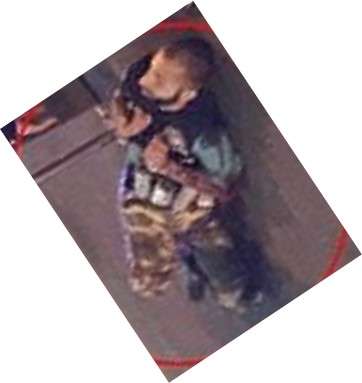 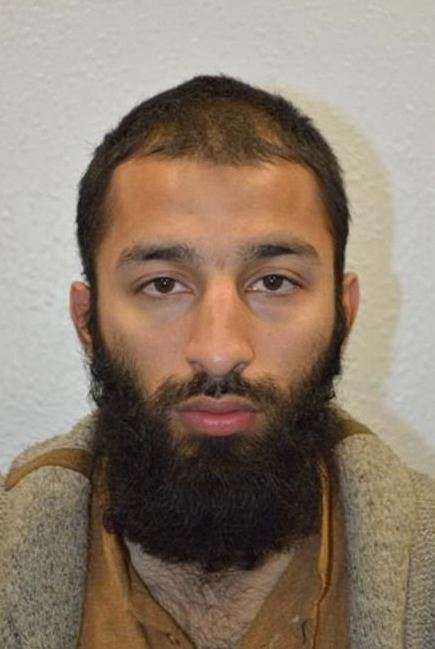 – Of Pakistani origin lived in a ground floor flat in Barking for three years. He also worked for Transport for London. Neighbours stated that he has a family, was always pleasant and would help out in the community. Asked his neighbours on 2nd June, where could he hire a van, therefore possibly the person who hired the van.
Attacker 3 – Youssef Zaghba, 22 years old. Wore a black hoody top. He is of Moroccan/Italian origin. 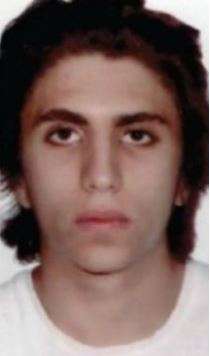 Timeline of Prominent Attacks Since 2010
– 2013, 29 April to 12 July: Pavlo Lapshyn attacks. Ukrainian far right extremists Lapshy was arrested for the murder of Mohammed Saleem and planning and carrying out a series of unsuccessful nail bomb attacks in the Midlands.
– 2013, 22 May: British soldier, Lee Rigby, was stabbed to death outside an army barracks by two Islamic extremists, Michael Adebolajo and Michael Adebowale in Woolwich, London.
– 2015, 5 December: Islamic extremist Muhaydin Mire stabbed and injured three people at Leytonstone Tube Station in East London.
– 2016, 16 June: Assassination of Labour MP Jo Cox by right wing extremist Thomas Mair.
– 2017, 22 March: Khalid Masood, a British man born in Kent as Adrian Elms, drove a car into pedestrians on Westminster Bridge killing six including himself.
– 2017, 22 May: Manchester Arena suicide bombing killed 22 people and injured 116.
Impact
– Societal Impact: This attack will create an atmosphere of suspicion, fear and general panic. The biggest fear is the breakdown of community cohesion. The political response will have to be measured, because interning large quantities of terror suspects will likely lead to a backlash among British Muslims, however, if attacks such as this continue the electorate will likely support political parties who offer more acute solutions to the problem of Islamist terrorism.
– Increase in support for reactionary groups: Prior to the terror attack in London, an English Defence League demonstration was held in Liverpool, with a counter demonstration by anti-Fascists. The demonstration saw violence on both sides and last night’s attack will only provide more support to reactionary groups, as well as a rise in left wing extremism seeking to combat right wing groups.
On the day of the attack there was a EDL demonstration in Liverpool with a counter demonstration by anti-Fascists.
– Strain on Police: Only two weeks after the Manchester Arena attack, which is still being investigated, this attack has occurred and will further stretch police and security service resources. This is at a time when there are varying accounts of how many terrorism suspects are in the UK, with figures varying from 3,000 – 23,000 subjects of interest.
– Tourism: With a persistent terror threat it is highly likely that London and other UK cities will see a dip in tourism revenue. Following the Paris attacks in 2015, the following year, Paris saw a decline in tourism revenue by 1.5 billion Euros and approximately 10% fewer tourists coming to France in comparison to previous years.
Assessment
The timing and location of the attack, a popular dining area on a Saturday evening suggests that the terrorists were aiming for maximum propaganda impact. The attack also occurred on the eve of the concert mourning the victims of the Manchester Arena bombing. Again, this also could be linked to the timing of the attack.
The statement by the neighbour in Barking of the terrorist asking where he can hire a van the day before the attack suggests that the attack was planned with minimal notice. The attack is also similar to the Westminster attack, using a vehicle to run over pedestrians and then stabbing people. Prime Minister Theresa May stated that the attackers were not linked to the Manchester attacker, therefore this appears to be a copycat attack. The threat is that this attack, spurs on someone else with extreme views and pushes them across the line from planning to acting on those urges.
This attack, just like the Manchester Arena bombing aims at they stirring up fear, prejudice and suspicion with the intention of creating a sectarian war in Europe. As tit for tat attacks are conducted between communities, the risk is that this escalates to massive civil unrest and sectarian conflict, as has been seen in Iraq and Syria for many years.
Police and security services will now be not only trying to find anyone connected to the attack, but monitoring how right wing groups respond. It is our assessment, that with large scale migration without effective integration, security forces significantly overstretched, a prison service which is becoming a jihadi breeding ground and incidents like this destroying community cohesion, that attacks like this will not only increase in frequency in the future, but also in lethality.
Back to Reports & Resources