London: A case study in Security

In 2017 London has seen an escalation in two categories of criminal activity that have grabbed significant media attention and concern from citizens, namely the use of mopeds to conduct assaults/thefts and acid attacks. Intelligence Fusion looks at both cases and attempts to ascertain why those two, sometimes intertwined criminal tactics have increased. 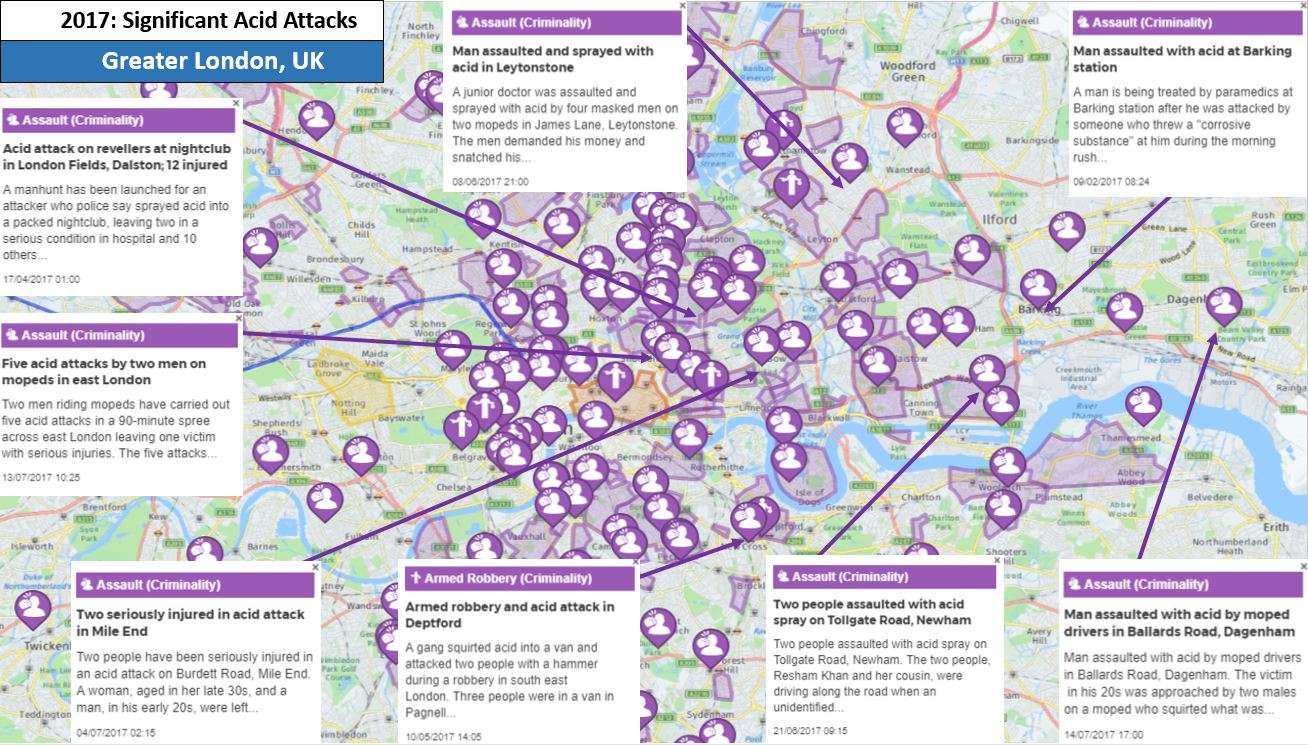 Greater London, United Kingdom Acid Attacks in 2017 ( to date).* Note: purple overlays are gang areas that subscribers have full information access to.
Acid Attacks
Historically, acid attacks have been largely confined to Londonâs ethnic communities and associated with honour based violence. The use of acid for conducting assaults has seen a dramatic escalation in recent years with criminal gangs adopting its usage in London. Data, released by the London Metropolitan Police, showed the number of reported acid attacks in London rose from 261 in 2015 to 454 in 2016, a rise of 74 per cent. The statistics also revealed that more than 1,800 attacks involving corrosive fluid have been reported since 2010.
Acid attacks in London have increased by 74% between 2015 and 2016.
It is likely that this increase in usage is due to several factors. Obtaining the chemical fluid, such as hydrochloric acid and sulphuric acid, is easy for gang members or criminals. Minors can also far more easily obtain bleach at a shop than purchase knives. Effective stop and search procedures by police in more criminally vulnerable areas of London has also forced criminals to look at ways to arm themselves without having to hide knives or firearms. Throwing acid at victims is easier than attempting to stab someone and more importantly it is far more difficult to identify an attacker as the perpetrator can readily hide the acid in a drinks bottle or other container. Multiple victims can also be targeted at the same time as illustrated by a recent acid attack on nightclub revellers in April in Dalston, injuring 12 people. Many clubs or public areas now have increased security measures such as metal detectors or searches. Using acid allows the attacker to operate in those areas without being detected unlike carrying a knife. Gangs are also using acid to target delivery drivers as they can threaten to spray the acid through the window of the vehicle.
The use of acid also has a significant psychological effect on potential victims knowing that there is a potential of life long scarring or blindness. Moped thieves are also increasingly using acid as it proves easier to use rather than a knife or gun. Although some arrests will be made and gang members sentenced, it is difficult to see how police can effectively counter this increasing trend and attacks will likely increase in the near term unless a successful countermeasure or deterrent is introduced. 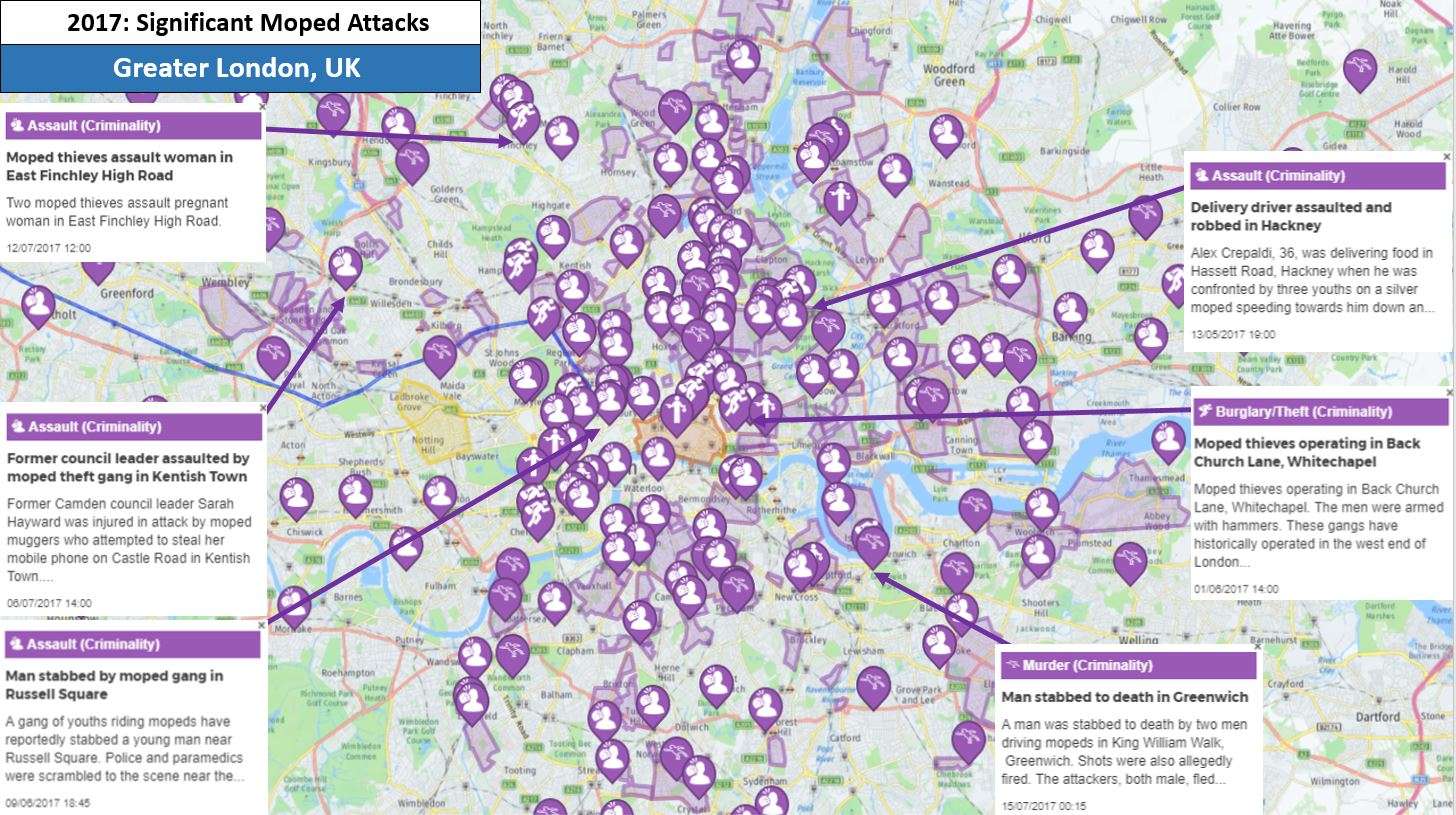 Greater London, United Kingdom Moped Attacks in 2017 ( to date). * Note: purple overlays are gang areas that subscribers have full information access to.
Mopeds
The use of mopeds by criminal individuals or gangs has dramatically escalated in recent months within London. The main tactic carried out by these criminals, a significant number teenagers under 18 years old, is to approach victims on the street and snatch their phones or handbags as they speed past. Many mopeds employ two people, the driver and the operator or snatcher.
The use of mopeds allows the criminals greater freedom of movement, protection from identification due to using helmets and to approach unsuspecting pedestrians in areas that vehicles cannot access as well as quickly accelerating away. The mopeds are generally previously stolen and are later dumped or have their number plates removed.
A worrying trend in recent months is that the robberies are becoming more brazen with moped gangs increasingly willing to resort to violence against their victims as well as carrying weapons such as guns, knives and acid. The recent murder of a man near the entrance to Greenwich Park on 15 July 2017 by two moped drivers armed with a firearm and knife is evidence of this worrying trend.
Another disturbing trend seen in Intelligence Fusions incident data is the spreading of these incidents to areas of London that were previously not reported on. Historically moped theft gangs operated in west and north London such as Camden, Islington, and Kensington. In recent months further incidents have been recorded in east and south London such as Deptford and Greenwich. Moped thieves also operate in the City of London targeting commuters with several thefts reported in Intelligence Fusion archives in 2016. Intelligence Fusion has furthermore witnessed unconfirmed social media reporting of thefts occurring in the vicinity of Moorgate and Ropemaker Street, although this has yet to be verified. No known incidents have yet to be reported in Canary Wharf to date in 2017 although this may be likely due to effective road traffic restrictions and a highly visible security infrastructure. It is likely that this trend will increase in scope and audaciousness throughout London unless an effective way to counter these robberies is introduced. 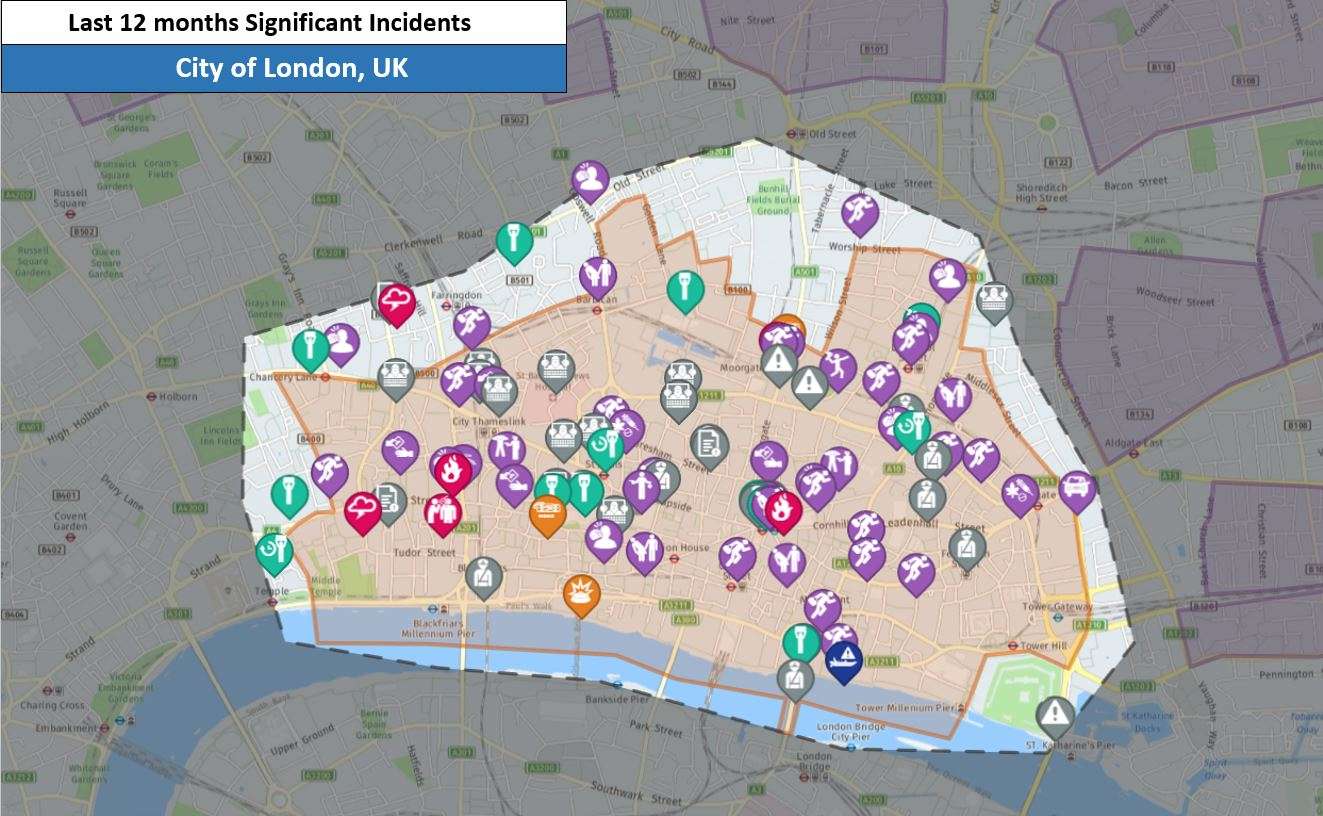