The following blog feed is coming from Intelligence Fusion who are in London monitoring the May Day protests:
(Scroll to the end of the page for the latest updates)
1400hrs: The demonstration is currently peaceful. Only incident seen so far was smoke cannisters being let off by demonstrators who are marching from Holborn to Trafalgar Square. Low key police presence. 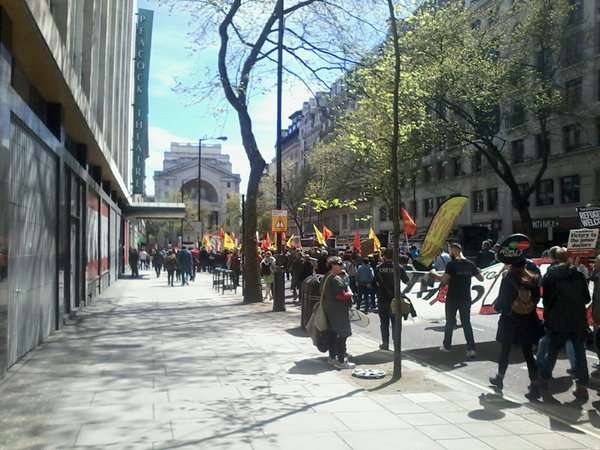 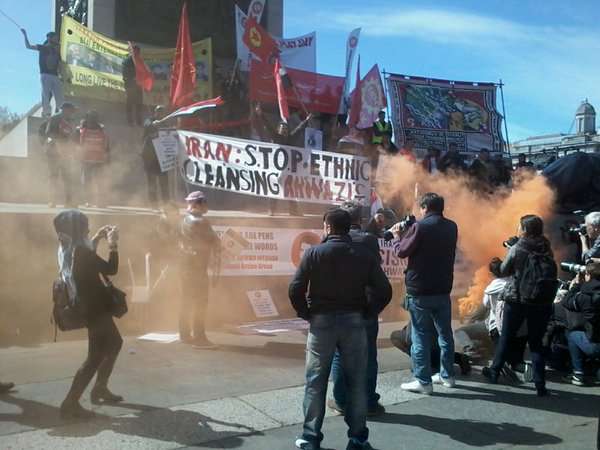 1447hrs: Ahwazi supporters are also present at Trafalgar Square using May Day to highlight their own cause. COMMENT: Ahwazis are Iranian Arabs and form 2% of Iranâs population, located in the west of the country. The Iranian government has cracked down on the ethnic group since the 2005 Ahwazi Arab uprising. In December 2015, Iranâs intelligence and security forces reportedly rounded up and detained scores of Ahwazi Arabs, including several children, in what appears to be an escalating crackdown in Iranâs Khuzestan province, Amnesty International and Human Rights Watch said. According to activists and family members, many arrests took place in the lead-up to the tenth anniversary of mass anti-government demonstrations that gripped the Arab-populated province in April 2005. COMMENT ENDS
1500hrs: Anarchist groups marching towards Trafalgar Square. 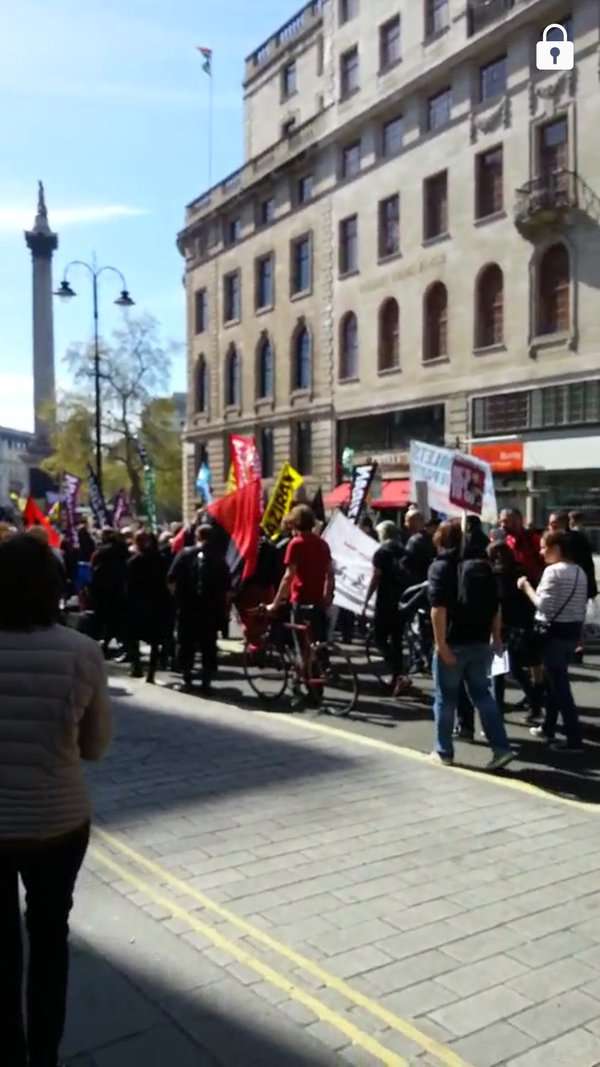 1520hrs: Police state protest is very quiet and are not anticipating violence. The demonstration is due to end at 1600hrs. 3-4,000 were anticipated to attend and only 1,000-1,500 left. Reason stated that the demonstration is subdued is because there are far too many different groups to be cohesive.
1600hrs: Protest has finished, however, there are other protests planned today.
1840hrs: Around 100 people outside Aldgate Station protesting the gentrification of London. 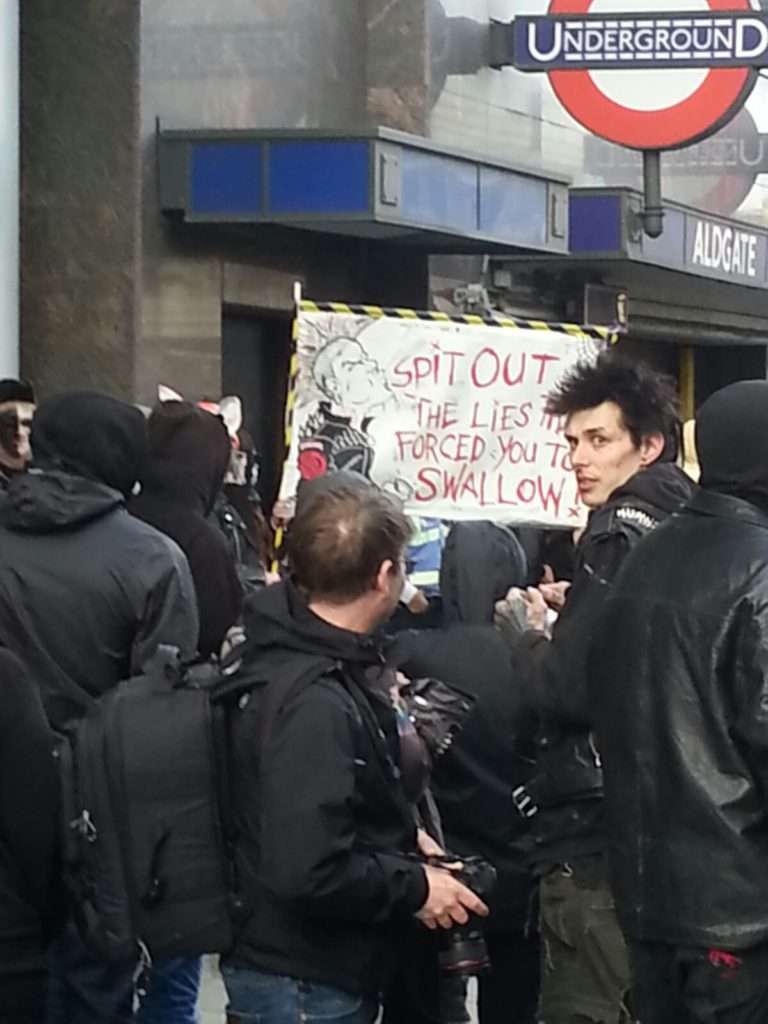 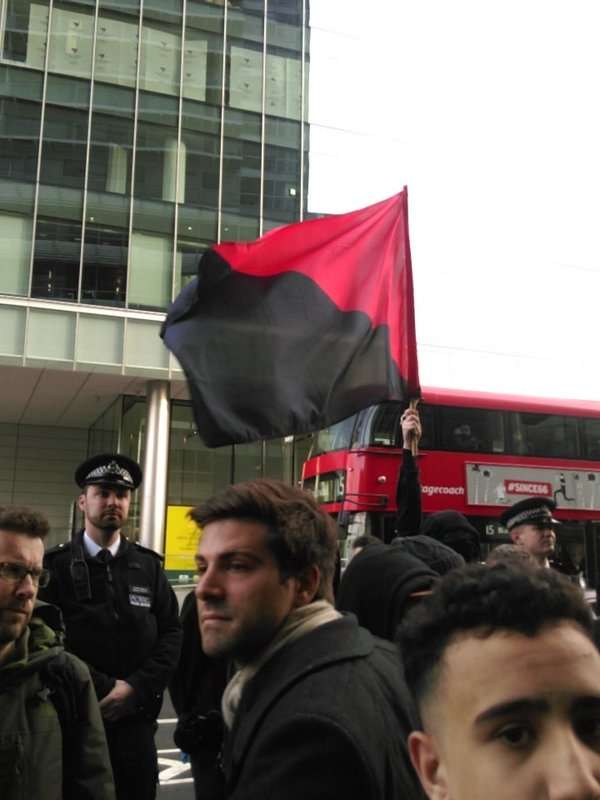 1846hrs: Group is by housing development in Aldgate, heading west to The City.
Conclusion
Unlike previous years where activists used such protest stunts such as guerrilla gardening and street theatre, todayâs May Day demonstrations in 2016 seemed rather more subdued. With little media reporting or hype unlike previous other years and a low key police presence for the event, the main protest passed off with little incident. It is likely that the date of the protest, occurring on a Sunday and not being routed through the main financial areas of the City of London, prevented any potential direction action being carried out against corporation buildings or locations. A perceived improved economic situation compared to past times and previous failure and disenchantment of the Occupy London movement may have also contributed to the comparatively low turnout on the day.
In the decades before, May Day was traditionally used by indigenous trade union organisations as a platform to celebrate workersâ achievements and campaign for further rights. British trade union organisations from across the UK would converge on London to march and display solidarity. The May Day London 2016 rally now reflects Britainâs multicultural composition with a mish mash of eclectic ethnically organised diaspora organisations ranging from Sri Lankan socialists to Kurdish Freedom fights, using the event to showcase their own causes and demands. With such a fragmented demonstration, the May Day parade has lost its political potency and instead has become more a carnival for the latest cause celebre or international left wing movement.
Historically anarchist groups have infiltrated May Day to carry out acts of direct action including vandalism and violence. This has in turn dissuaded other potential more mainstream marchers from attending who are reluctant to be caught up in such incidents and therefore alienating a huge number of potential supporters. Media reporting on previous May Day violence such as in 2000 or 2001 has given the day a poor image amongst the British public.
Anarchist groups have also become increasingly savvy to police and other security organisations monitoring their social media posting and attempts to organise online. In recent years, including 2016, anarchist groups intend on direction action have attempted to only release information last minute or even advertise false information in an attempt to confuse or delay police deployments.
This year the Fuck Parade anarchist group organised an anti-gentrification demonstration outside East Aldgate at 1800 hours. Security forces this year were well prepared with a heavy albeit discreet presence with police vans and riot officers deployed discreetly in the streets and access routes surrounding the station. With approximately 80-100 protesters gathered by the station, who this year were accompanied by legal observers at their own request, the anarchist protest seemed more subdued and less threatening than past years with loud music, fairly tolerable relations with the police liaison force and little signs of unpredictability. Fears of Anarchist groups peeling off to create trouble away from the group were also unfounded. There appeared little leadership amongst the anarchist group, composed mainly of white student youth drinking or smoking weed with a large percentage afraid to reveal their identity. After approximately 40 minutes the group decided to move south, possibly due to police influence. Groups of local youths, attracted by the demonstration followed the demonstration as it made its way approximately 500 metres down Leman Street before being blocked and kettled by police on Cable Street and being effectively prevented from heading west towards the City of London.
In conclusion this year would seem a comparative policing success. The main points to this were:
Low publicity and turnoutPolitical and social fragmentation of May Day demonstratorsLack of a coherent strategy or effective planning by direct action protestersEffective communication between police forces and protest groupsSound police planning, swift intelligence led deployments.Police adopting a low key non confrontation approach on the day
Back to Reports & Resources