Islamic State in the area of Bani Walid 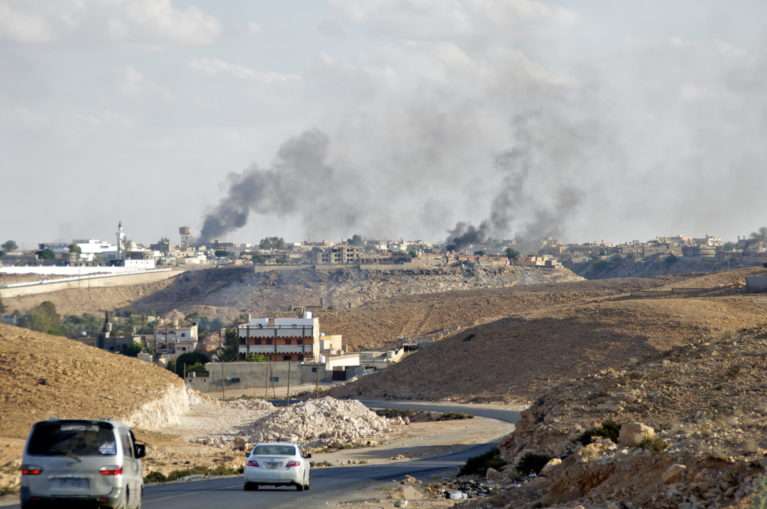 Prior to the US B2-Bomber airstrikes 45km south west of Sirte, security forces in Bani Walid claimed to have clashed with Islamic State in Qaraza and the surrounding valleys. 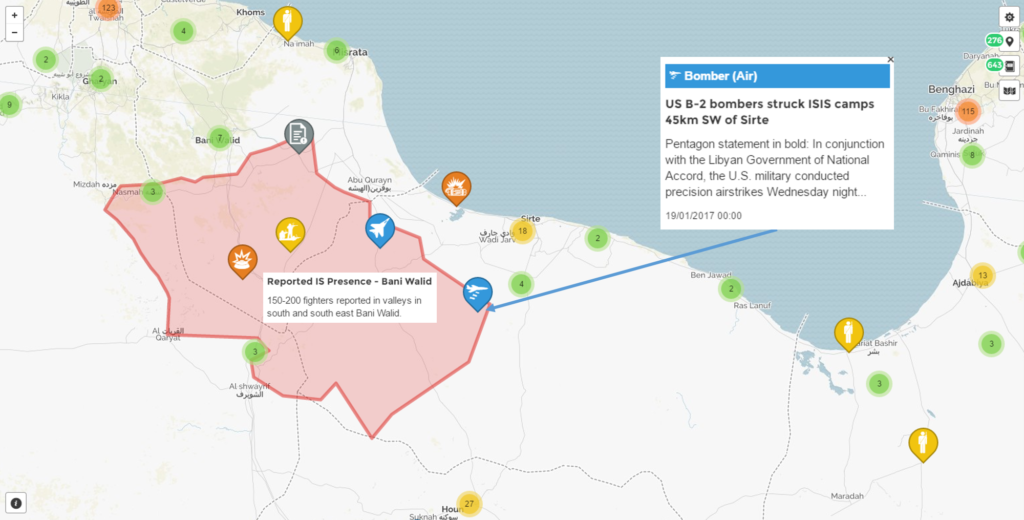 Reported US B-2 Bomber attack targeting Islamic State camps southwest of Sirte.
The assistant commander of the Bani Walid Ops Room declared the existence of 150 to 200 Islamic State militants, who likely escaped Sirte towards the end of the Al Bunyan Al Marsus operation, in the valleys south and south east of Bani Walid. Islamic State, they claim, retreated to al Hashi, al Qabilat, Kumbu Waraq and neighbouring valleys. It is claimed that Islamic State have set-up training camps in Kumbu Waraq and valleys between Bani Walid and Abu Seif. Islamic State are reportedly also intent on smuggling fighters to Tunisia for medical treatment. Other sources have noted Islamic State may be taking advantage of smuggling and smugglers (petrol, rice, wheat) for financial income, it is not clear if they are actively engaged in smuggling activities or taxing groups that pass through areas with an Islamic State presence, as AQIM do in the Sahel. The Bani Walid ops room also claim Islamic State are engaged in theft of cars and aim to secure supply routes. 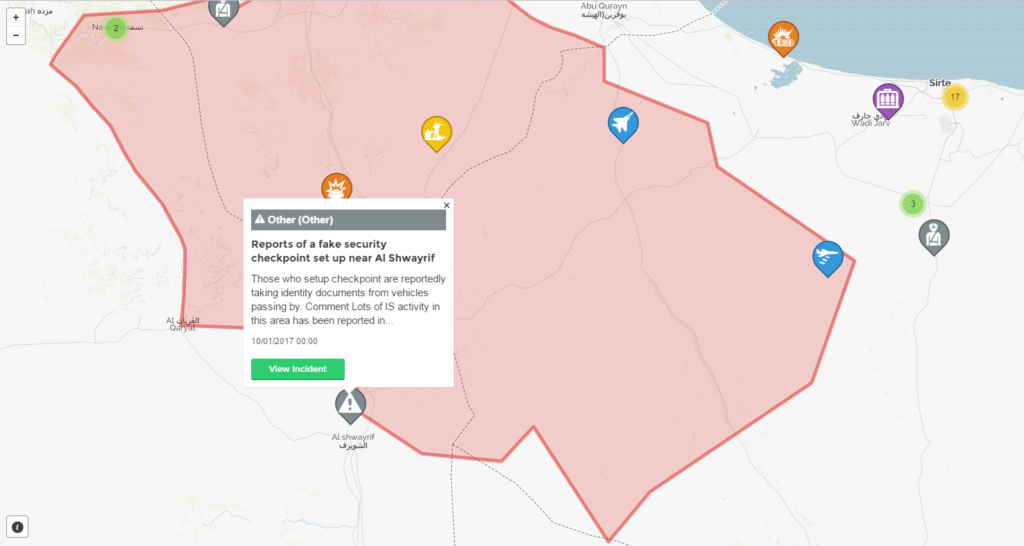 Location of fake security checkpoint set up near Al Shwayrif.
Initial reports claimed Misratan Aircraft found it difficult to carry out reconnaissance missions over valleys south east of Bani Walid due to terrain and weather and because due to the difficulty in differentiating between pastoralists and IS militants who are reported to move in small groups and in vehicles. Indeed, the inaccessibility of such a location and that it links Kerma and Qurjuma valley to south Bani Walid is precisely why Islamic State would choose the area to set-up training camps.

Locations of search operations at Qaryat Shumayk, Wadi Sawfajjin, area around al Qalâat and Tininay.
As reported by Libya Herald, the extent of the intelligence behind Islamic Stateâs regrouping in the area is unclear. However, the recent US airstrikes 45km SW of Sirte confirm ISâs presence in areas between Sirte and Bani Walid. There are unconfirmed reports of the arrest and questioning of an unarmed Islamic State fighter who purportedly confessed that he had managed the escape from Sirte just before it fell. He may have been heading toward a pre-arranged rendezvous. As shown in my previous article, it is well known that throughout and indeed after the Al Bunyan Al Marsus operation, Islamic State claim to or did launch systematic ambushes or IED attacks on the coastal road between Abugrein and Sirte. Such attacks are also claimed to have been carried out on civilian vehicles. At one point security on the highway became so bad, there was a ban on overnight travel and BM commanders tried to organise guarded convoys.
A female Islamic State member claimed she made her way to Sirte from Sfax via Ben Guerdane, Sabratha and Bani Walid (her trip route planned by an Islamic State militant she communicated with through the internet). She was radicalized via Islamic State propaganda and sermons of Abu Zaid at a mosque in Sfax called Masjid Alamar (ÙØ³Ø¬Ø¯ Ø§Ù Ø¹Ø°Ø§Ø± ØµÙØ§ÙØ³). She travelled across the desert from Ben Guerdane to Sabratha where she stayed with a Libyan family before being moved to a private property where her and others present in the property were transported to Sirte via Bani Walid. Together, with reports below, it seems that, if reports are true, Islamic State could be exploiting the Tunisian-Libyan buffer zone in Tataouine and south of Ben Guerdane. smuggling fighters through routes used by fuel smugglers. Islamic Stateâs presence in areas south of Sirte, Bani Walid and Sabratha has been recorded in the past, so it wouldnât be irrational to suggest Islamic State have used such a routes in the past as they may be doing now. 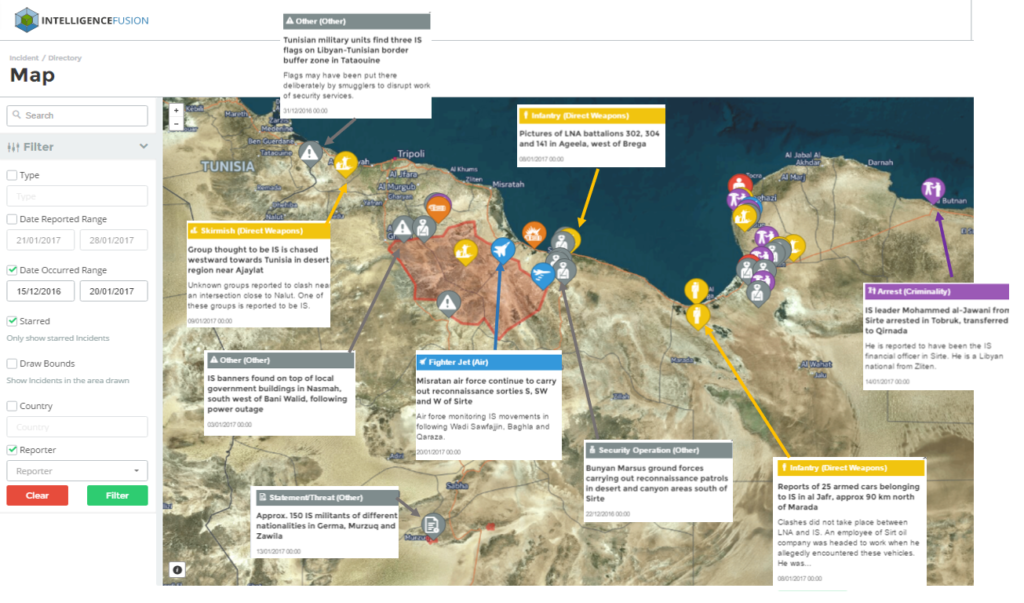 Video of Khaled Al-Amari arrested by LNA Battalion 152 approximately 60km south of Ajdabiya. Two others with him detonated their suicide belts. They were in possession of weapons, ammunition and a suitcase full of cash. 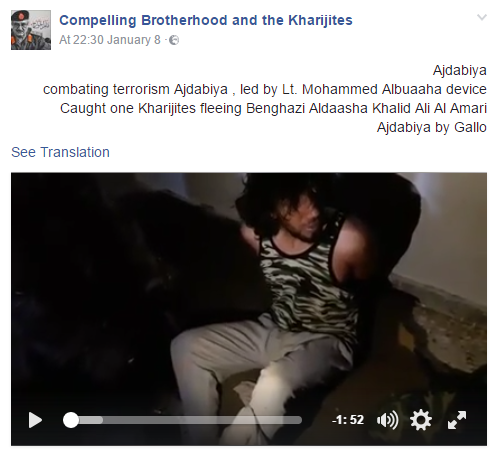 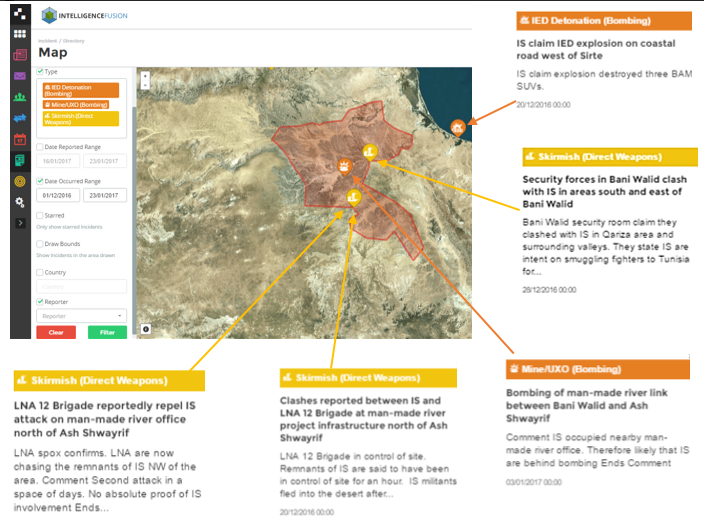 Locations of Islamic State attacks.
Security forces in Bani Walid claim Islamic Stateâs clash with the LNA 12 Brigade was a calculated move taken to keep the latter away from training camps. 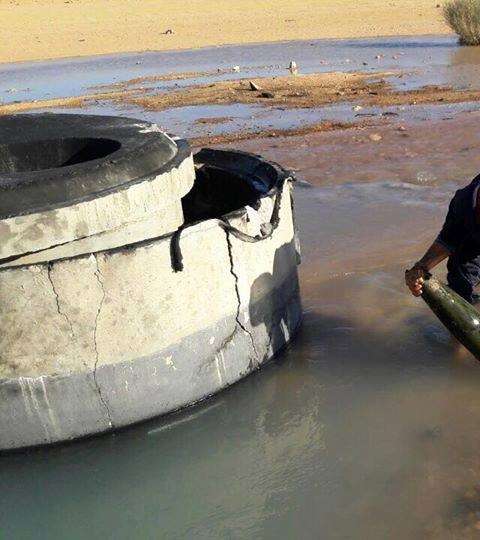 Sabotage of man-made river infrastructure reportedly by Islamic State. Supply was affected to al Khums man-made river station. The station in al Khums was forced to shut down to reduce water pressure for maintenance crews to repair damaged link. The closure of the station was a contributory to water shortages in western Libya.
Back to Reports & Resources