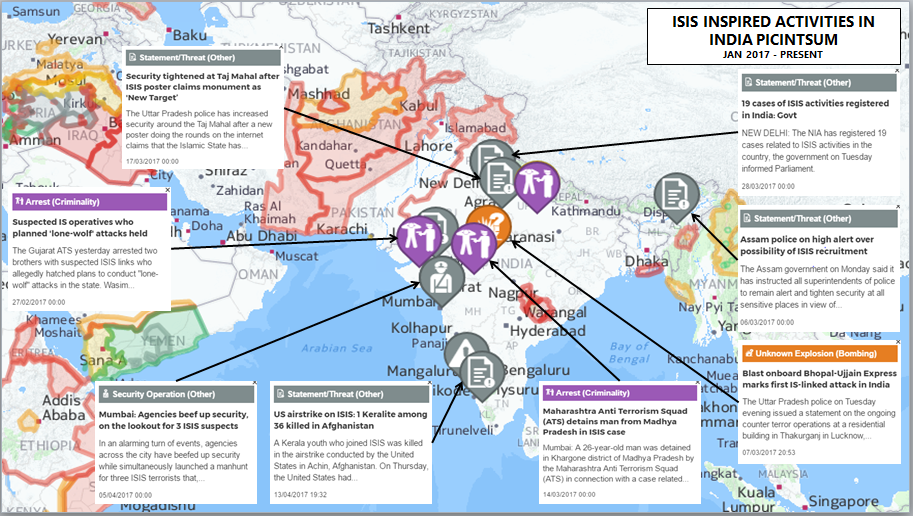 Analysing and monitoring open source intelligence has highlighted that ISIS inspired activities and attacks have increased in India. The National Investigation Agency (NIA) has already registered 19 cases related to ISIS activities this year.
In February, Gujarat Anti-Terrorist Squad arrested two brothers with suspected ISIS links who hatched a plan to conduct lone-wolf attack in the state. In March security was tightened around the Taj Mahal by the government, as intelligence suggested that it was an ISIS target. In April a security agency in Mumbai was on the hunt for three ISIS terrorists. In the same month it was confirmed that an Indian national from Kerala was killed in a US drone strike in Afghanistan. 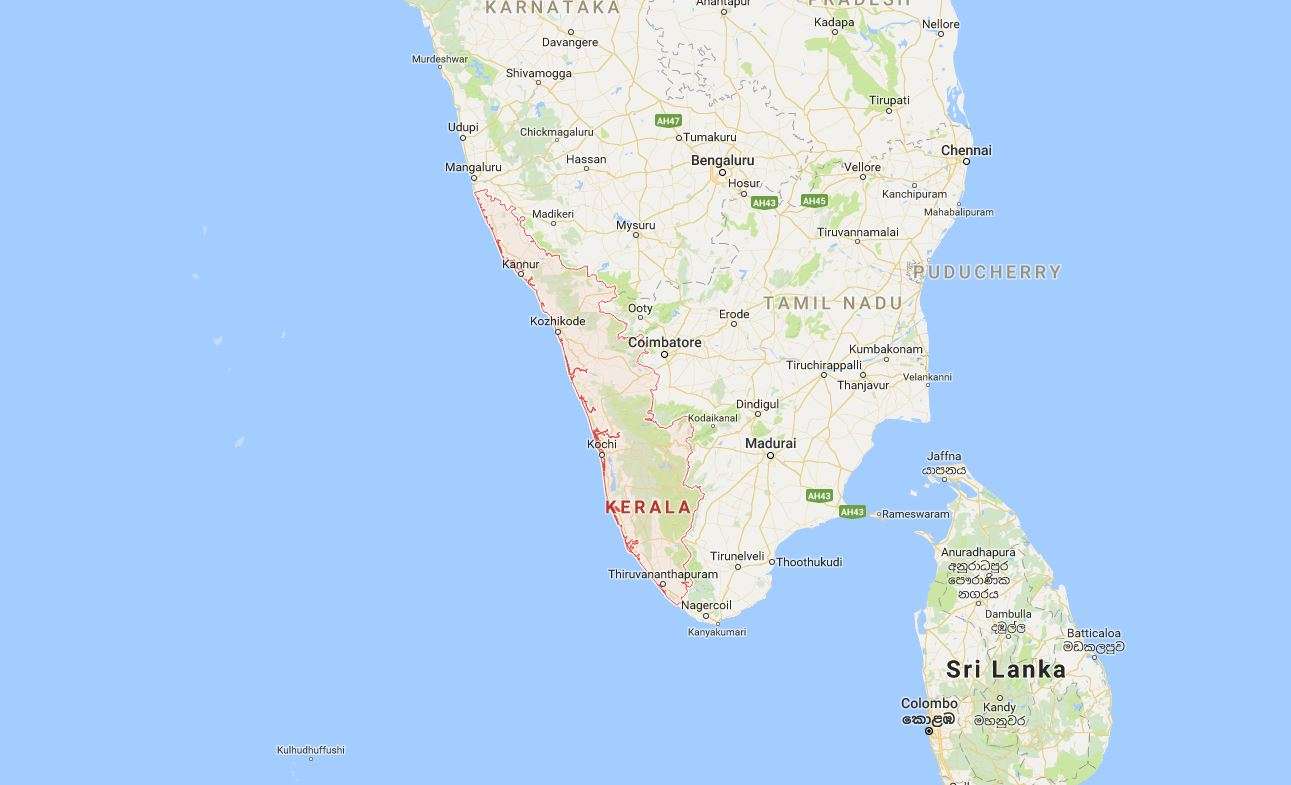 Location of Kerala, India.
It is suspected by the NIA that it was one of the 11 young men who have gone to join ISIS from Kerala’s Kasargode [1]. Moreover, an Afghan security source confirmed that 13 Indians [2] who joined ISIS were amongst those killed in the US ‘Mother Of All Bombs’ bombing on Achin, Afghanistan – according to the Afghan News agency [3].
In addition, the Mumbai Anti-Terrorist Squad detained a 26-year old individual from Madhya Pradesh due to ISIS related activities. In the eastern state of Assam, which shares its border with Bangladesh, the state government instructed superintendents of the police to remain on alert for possible ISIS recruitment activities in the state that has porous border with Bangladesh – currently a hotbed for Islamic radicals. In March the IED that detonated on-board the Bhopal-Ujjain Express train has been labelled the first ISIS attack in India; suggesting that India will witness such activities in coming months despite the alertness of various Indian security agencies.
As more misguided youths romanticise the ISIS ideology, in part due to the swathes of propaganda available on Internet, allowing them to self-radicalise. This online material can also prepare them for lone wolf attacks to which they think can justify their local grievances and as a sympathiser, help to stretch the proposed Islamic Caliphate up to India and beyond. It is difficult to put an estimate on how many Indians are fighting for ISIS in Syria, Iraq and Afghanistan but it is believed that out of more than 184 million Indian Muslims, only a handful have joined ISIS. Nonetheless as Western alliesâ pressure increases on ISIS in Syria and Iraq, some of its fighters and sympathisers will return back to their country of origin and engage in terrorist activities.
According to government sources, more than 1.75 million Indians live in the UAE alone, which constitutes 30 per cent of its total population [4], and most are from Kerala and other southern Indian states. Similarly, there are large numbers of Indians living and working in other Middle Eastern countries. This provides the opportunity for the ISIS ideology to disseminate with sympathisers, and fighters to sneak back in the country under the radar of immigration channels; however, the Bangladesh and Nepalese borders are known to be used for such purposes without alerting security agencies and that poses a challenge to security agencies.
Whereas, the above should not surprise the Indian security establishment, Shaykh Abu Ibrahim Al-Hanif, âAmir of Khilafah in Bengalâ in ISISâs online magazine Dabiq [5], clearly expressed his intention to launch guerrilla attacks in the east and west of India, from the bases in Bangladesh and Pakistan, with the help of local Mujahedeen in India.[6] It is predicted that in the coming months ISIS related activities will increase and security agencies will have to come up with elaborate strategies to identify, locate and disrupt ISIS cells and lone wolf attackers in India.
[1] Koshy, S. M., (2017), Kerala man died in Afghanistan, NDTV, http://www.ndtv.com/kerala-news/kerala-man-who-allegedly-joined-isis-dies-in-drone-strike-in-afghanistan-1663730
[2] ANI, (2017), 13 killed in Achin, ANI, http://www.aninews.in/newsdetail-NA/MzA5OTEy/thirteen-indians-among-terrorists-killed-in-moab-bombing.html
[3] PAN, (2017), 13 Indian died in MOAB in Achin, Afghanistan, Pajhwok Afghan News @Twitter,
https://twitter.com/pajhwok/status/854239515057246209?ref_src=twsrc%5Etfw&ref_url=https%3A%2F%2Fwww.wionews.com%2Fsouth-asia%2F13-indians-died-in-mother-of-all-bombs-attack-afghan-news-agency-14638
[4] Embassy of India, (2016), Indian Community, 1.75 million Indian in UAE, Web Archive, https://web.archive.org/web/20120728024019/http://uaeindians.org/profile.aspx
[5] Dabiq, ISIS online magazine in DeepWeb, https://en.wikipedia.org/wiki/Dabiq_(magazine)
[6] Tiwari, S., (2016), India Today, ISIS plan to attack India from Bangladesh & Pakistan, http://indiatoday.intoday.in/story/isis-plans-to-attack-india-through-its-base-in-bangladesh-and-pakistan/1/706054.html
Report written by Gina Laxmicant
Back to Reports & Resources