The Iraqi parliamentary elections, scheduled for the 12th of May, provide an important spotlight into the stability of the country. Areas such as Kirkuk see a great deal of political and ethnic unrest, coupled with the danger of various politically affiliated militia groups operating in the region. While so many different armed groups with separate affiliations are operating, moments of political change are likely to be rife with discontent and possible violence. While the conflict with Daesh continues, there is still a possibility for groups to affect the outcome by interfering with candidates’ campaigns. 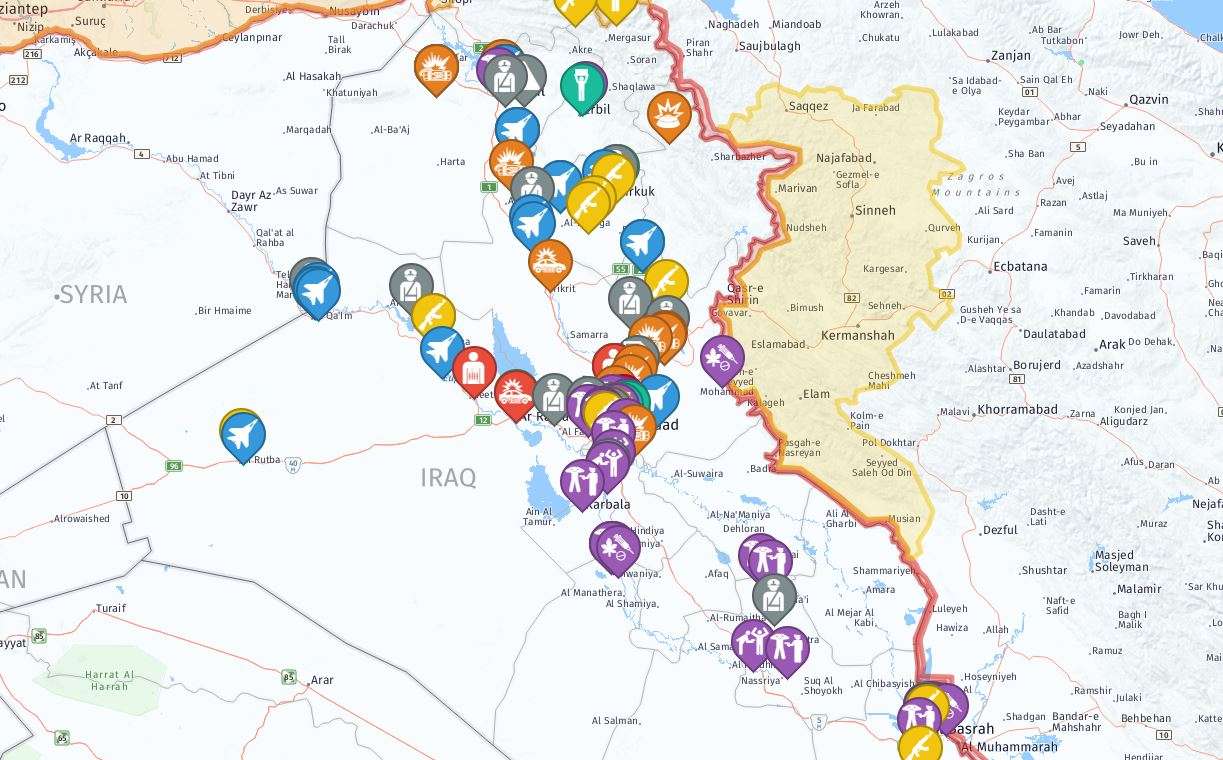 There are currently 3 main parties vying for control of Iraq. The first is the current government, headed by PM Abadi, who has split his party into two separate coalitions. While Abadi leads the “victory” list, in reference to his victory over Daesh, Vice President Al Maliki will head the State of Law coalition. This move may be to separate Maliki from Abadi’s coalition, as Maliki is often seen as the leader who allowed Daesh to make such large gains in Iraq initially, and is seen as a corrupt figure by many Iraqi’s. A second alliance to challenge Abadi emerged from PMF forces, whose commanders were directly involved in the fight against Daesh. Several PMF groups, including the Badr Organisation, banded together to challenge the victory coalition. Headed by Hadi Al Amri, the coalition initially agreed to work together with Abadi, but the agreement fell apart soon after, allegedly due to PM Abadi’s demands.

The only other party currently large enough to garner substantial votes is the KDP-PUK alliance. Barham Salih, a previous PM of Iraqi Kurdistan, has discussed forming a new alliance called the Coalition for Democracy and Justice to challenge the dominant alliance by gathering all remaining parties not involved with the KDP and PUK. While there have been no further reports on significant gains as of yet, a new coalition has the potential to change the political landscape of Northern Iraq. The KDP has also declared a boycott on elections in Kirkuk to protest what they call “military occupation”.

The campaign interference has made campaigning particularly difficult for female candidates, who are the targets of smear campaigns. Dr Intidhar Ahmed Jassim was the victim of an alleged sex tape leak, which she denied, but stepped down regardless. While the UN condemned the attacks, the larger issue at play is the conservative nature of Iraq. There is a current tension between liberal and conservative ideals in the state. Following the Daesh invasion, a more conservative platform was held across Iraq, with the criminalization of alcohol being an example. Major candidates such as Muqtada al Sadr are likely to follow a similar vein of conservative ideals, as well as anti US sentiment. 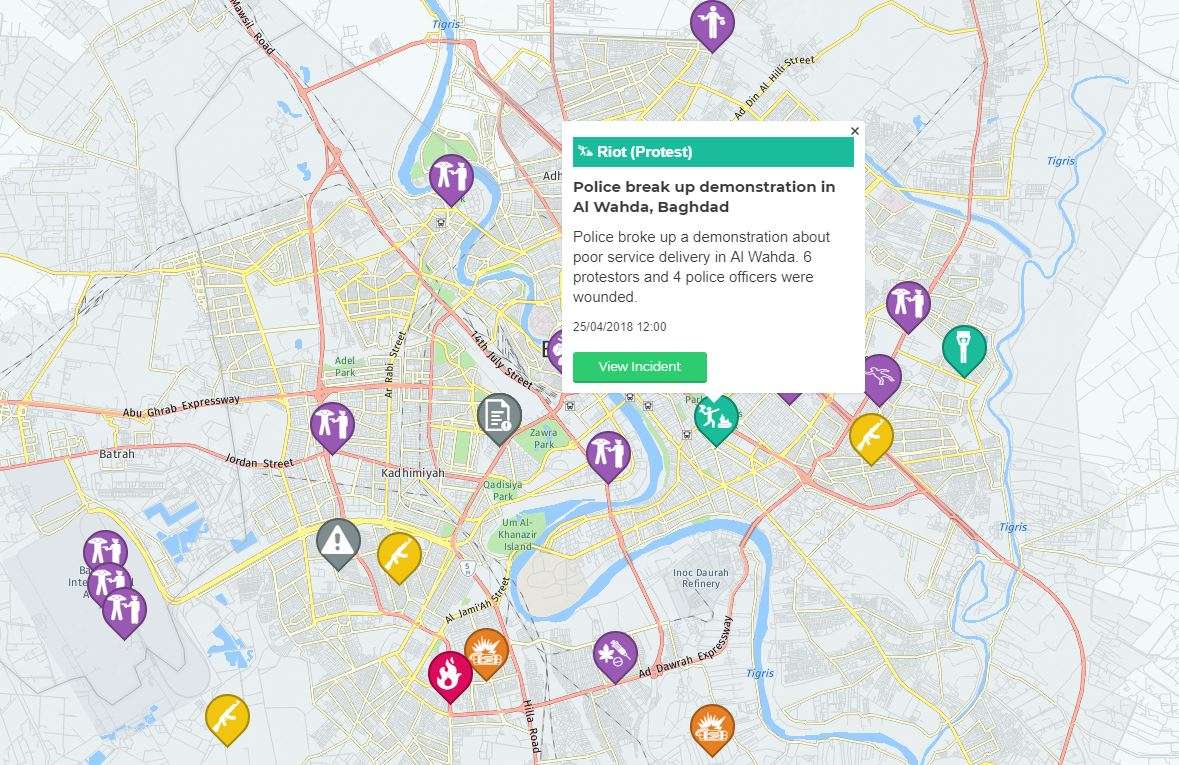 Civil action continues on calling for electoral reforms and an end to corruption. While protests usually happen peacefully on a Friday in Tahrir square, there was a recent protest that turned violent, which is a rarity in Iraq. Iraqi police broke up a political protest focusing on corruption and service delivery, that resulted in wounded protestors and police officers on the 25th of April in Wahda, Baghdad. It is likely that as the electoral date approaches, there will be increasing tensions during protests. 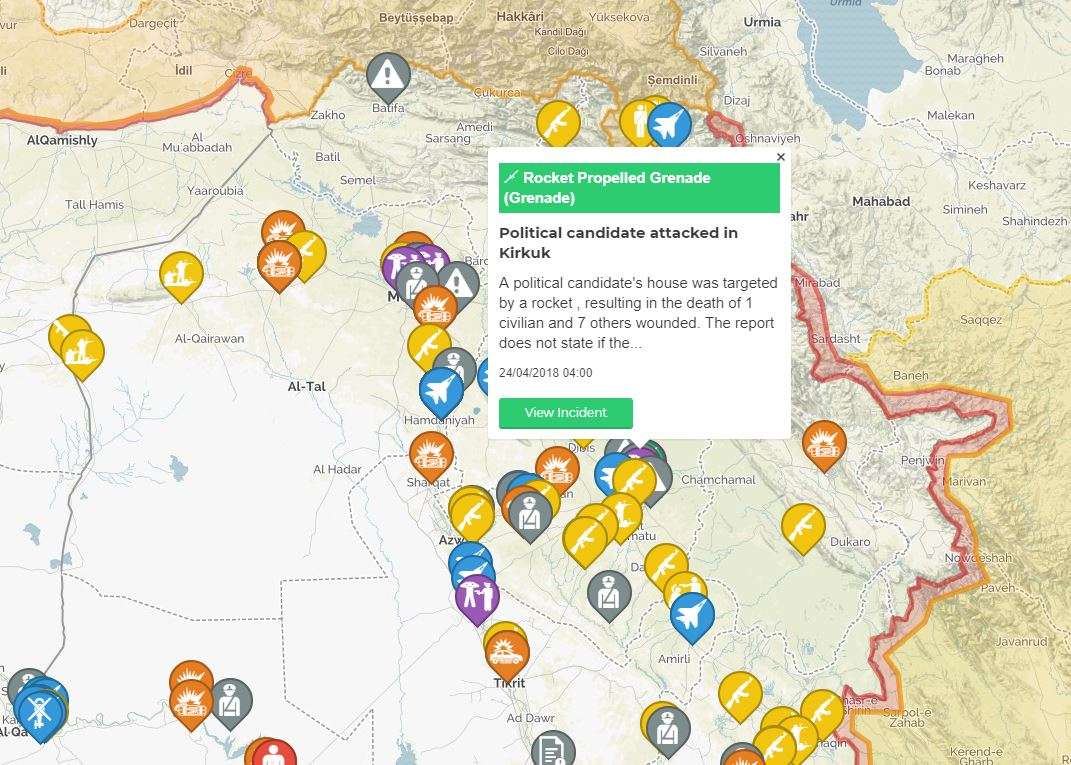 Finally, there have been reports of militia in PMF uniforms tearing down posters in areas of the Kirkuk governorate. An attack was also reported against a Turkmen Front member and political candidate’s house in the city. The Kirkuk governorate is one of the most hotly contested areas, the root of which hearkens back to the Iraqi army occupying the city just before the end of major combat operation against Daesh. If there is violence during the election period, Kirkuk is likely to be the location for it.

Iraq is in a unique position in the Middle East and is being courted for improved relations by all surrounding states. Shifts in the internal politics of the state will directly influence foreign policy in the region and as such, is worth careful consideration.