Intelligence Fusion has recorded more than 50 Maoist related attacks and incidents targeting Indiaâs security forces in less than 5 months in 2017. 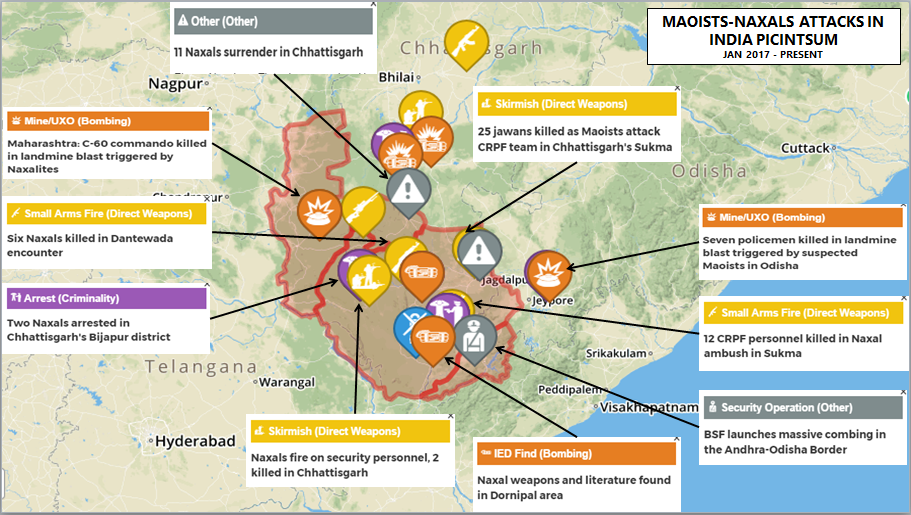 Click above image to expand.
In February, seven policemen were killed in a landmine blast triggered by suspected Maoists in Odisha. In the same month, police in Jharkhand seized 3,000 detonators and 2,000 pieces of gelatin sticks. In March, 12 CRPF (Central Reserve Police Force) personnel were killed in a Naxal ambush in Sukma district of Chhattisgarh. In April, Naxals torched road construction vehicles in Dantewada district of Chhattisgarh. In April, Maoists attacked a CRPF team in Chhattisgarhâs Sukma district and killed 25 Jawans. In May, a C-60 commando was killed in a landmine blast, triggered by Naxalites in Maharashtra. Further, over 50 landmines were recovered in a joint police operation in Jharkhand. These incidents draw the picture of lethality, the sophistication of weapons and tactics used by Indiaâs Maoists-Naxalite insurgents.
The Maoist insurgency is an ongoing conflict between Maoists groups and the Indian government. Maoists follows the Communist doctrines of Mao Zedong. Whist, Naxalites have a far left Communist ideology. The word Naxal derives from the village called Naxalbari in the state of West Bengal under the jurisdiction of Siliguri subdivision of Darjeeling district where the movement has its origin in a dispute over the redistribution of land to landless tribal and poor people. Initially, Naxalism had a different ideology but later it came under the influence by Maoism. Due to this ideological influence, the merger of various tribal groups and tactics used against security forces has collectively blurred the difference of the original Naxal movement. Hence, Naxalites are often known as Maoists and it is interchangeably used in the media,[1] as there is a resemblance of the objective they want to achieve by overthrowing the state, and ushering in a classless society using left wing extremism (LWE).
In 2016, Indiaâs 106 districts were affected by left wing extremism. However, the 44 districts worst affected[2] were in the 10 states of Bihar, Jharkhand, Andhra Pradesh, Maharashtra, Odisha, Telangana, West Bengal, Madhya Pradesh, Utter Pradesh, and Chhattisgarh. This has created a passageway affected with left-wing extremism that stretches from Bihar to Andhra Pradesh, which is known as Indiaâs âRed Corridorâ. In its earlier stage, the Nepalese Maoists and Maoists groups in India worked together to form a âRevolutionary Corridorâ that can stretch from Nepal and extend deep into southern India but that appears to be faded. 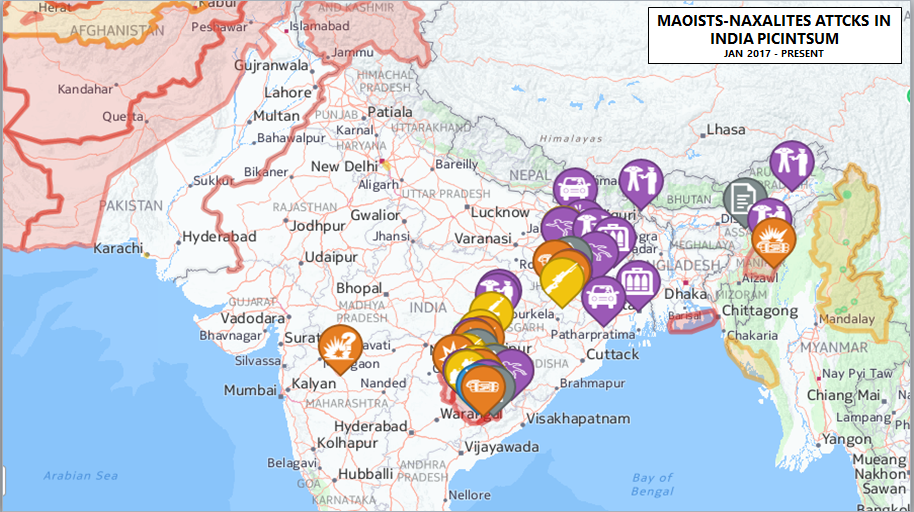 Click on above image to expand.
In 2017, 104 districts were affected by left wing extremism, spanning over 13 states, with 25 districts classed as highly affected.[3] Dantewada, Bastar and Kanker districts are highly affected in the state of Chhattisgarh which has the state border with Odisha, Madhya Pradesh, Maharashtra, Telangana, Jharkhand, Andhra Pradesh and Uttar Pradesh. Jharkhand is another state, is also highly affected by left wing extremism. Intelligence Fusionâs PICINTSUM shows the mapped areas with the highest number of Maoist-Naxalite insurgentsâ attacks. Left-wing extremism affects so many states in India that it is considered to be one of the biggest threat to internal security. In 2010, the then Prime Minster[4] had acknowledged that; however, this threat has not yet diminished in 2017.
Historical data between 2005 and up to May 2017 shows that a total of 2997 civilians, 1912 security personnel, and 2574 of Maoists were killed in left-wing extremism in India.[5] However, in the year 2010, the highest numbers of fatalities, 1180 were recorded. Further, Home Minister Rajnath Singh acknowledged that Maoism related violence has killed 12,000 people in 20 years and unveiled a new strategy to counter violence.[6]
Indiaâs Ministry of Home Affairs recognises that a number of left wing extremist outfits have been operating in the remote and poorly connected pocket of the country for a few decades. It also notes that the Peopleâs War (PW) operating in Andhra Pradesh and the Maoist Communist Centre of India (MCCI) operating in Bihar and other areas, merged to form the CPI (Maoist) Party. The CPI (Maoist) Party is considered to be responsible for the majority of incidents of violence.[7] The CPI (Maoist), the main left-wing extremist outfit aims to overthrow the existing democratic state structure.
The Indian government strategy to address the Maoist insurgency is through – delivering security, development, rights, and entitlement to local communities in remote areas. It is an irony that even after 70 years of independence many of the districts in the Red Corridor lack some of the basic necessities such as water, electricity, education, and health services. However, this region has an abundance of natural resources such as iron ore and coal. Just alone in Odisha, bordering Chhattisgarh has mineral reserves which constitute 28% Iron ore, 24% coal, 59% Bauxite and 98% Chromite of India’s total deposits[8]. This region though remains either impoverished or has significant inequality compared to other states in India. Besides, poverty and a higher illiteracy rate; the bitter opposition of mining natural resources in the tribal areas by tribal people and state governmentsâ failure to address their concerns are exploited by Naxalites that fuels the insurgency. In the absence of the permanent security, jungles are used as hideouts, from which Maoists launch attacks on security forces. In some of these remote areas, Maoist rebels operate parallel governments preventing local organisations to function where tribal people are trapped between Maoist rebels and the security forces.
The priority of the Indian government is to provide security and development in underdeveloped tribal areas to counter the Maoist insurgency, which is a threat to the internal security of India. However, in the absence of non-existing road infrastructure, delivering development and security remains a challenge. In 2009, the Ministry of Road Transport and Highways devised a Road Requirement Plan-I (RRP-I) for LWE affected areas to improve road connectivity in 34 LWE affected districts of 8 states namely, Andhra Pradesh, Bihar, Chhattisgarh, Jharkhand, Madhya Pradesh, Maharashtra, Odisha and Uttar Pradesh. The RRP-I envisaged 5,477 km of roads, covering 1,126 km National Highways and 4,351 km State Road at an estimated cost of Rs. 7,300 crores.[9] This suggests how the road infrastructure will be a crucial link in the fight against Maoist insurgents as it gives security forces access to inhospitable terrain and helps to drive out far left radicals so as to develop the region. 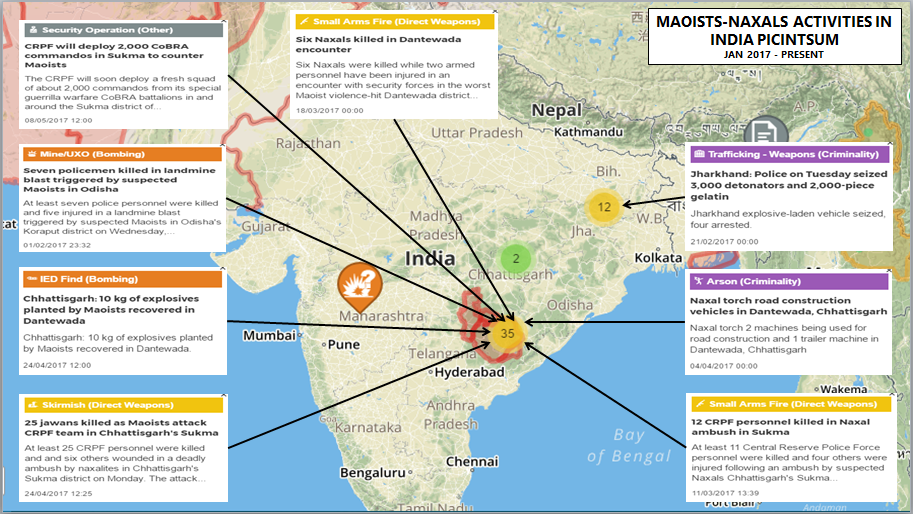 Click on above image to expand.
Maoists see road building as a serious threat to their existence. As highlighted earlier, the central theme of the Maoist ideology is violence. The Maoist insurgency doctrine glorifies violence as the primary means to overwhelm the existing socio-economic and political structures.[10] Hence, the government has surged 30,000 security force personnel to the region to protect road construction workers and contractors.[11] However, in the vast swathes of the heavily forested area that Maoists control, security forces end up as sitting ducks. This can be witnessed when 25 Jawans of 74th battalion of CRPF were killed by Maoists in Sukma district, a hotbed of Maoist militancy in Chhattisgarh. The massacre is one of the worst in seven years, since 2010 when the rebels killed 75 CRPF troopers in the same region. Just alone in the state of Chhattisgarh, 176 deaths was recorded due to the Maoists violence in 2011, 108 in 2012, 128 in 2013, 113 in 2014, 120 in 2015, 207 in 2016 and 162 in 2017 respectively.[12] 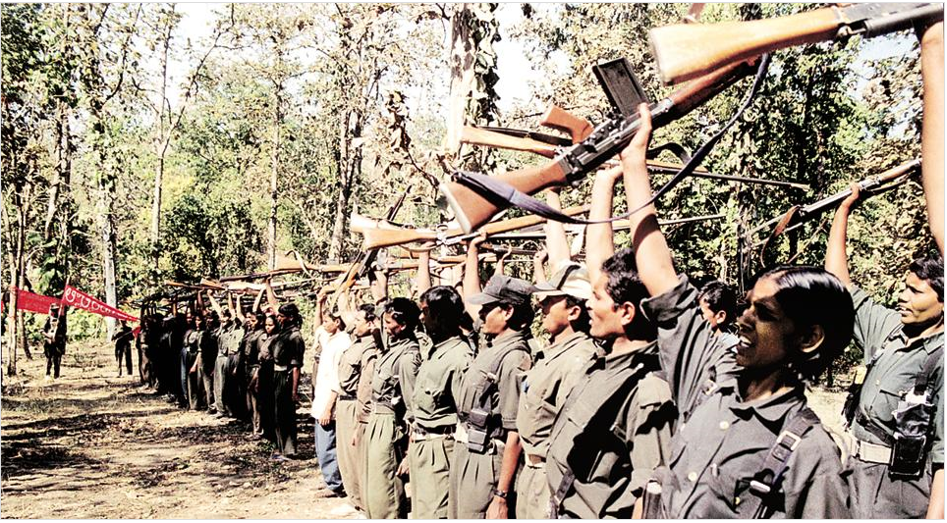 Naxal training camp â Hidustan Times
Analysing open source intelligence can predicate that India will witness more of such attacks on security forces by Maoists as the seeming uptick in attacks is the result of road building activity in Maoist-controlled areas that Maoists are trying to stall. The increasing presence of security forces in the affected areas is gradually shrinking safe pockets for Maoists in the hotbed of the Red corridor. In this situation, Maoist rebels have two options – either to surrender or fight and recent incidents suggest that they have chosen the latter, to fight with deadly consequences and data indicates that so far just alone in Chhattisgarh 162 fatalities has been reported.
It should be noted that there is a positive indication that the Maoist insurgency will gradually decline, with a government two-prong approach by pushing security and development in the Red Corridor. This appears to be making progress, as there has been a steadily increasing number of rebels surrendering or being captured this year. However, this could easily turn out to be false hope and a ploy allowing the Maoistsâ time to retreat and regroup, in preparation for future offensives. As in December 2015, the National Investigative Agency (NIA) charged 16-suspected ISIS extremists, claiming that ISIS operatives in India had approached Naxalite groups to understand their modus operandi for perpetrating terror.[13] This possibly could be the reason for a sudden spike in Naxalite activities in the Red Corridor between 2015 and 2016. Further, in April 2017 the Chhattisgarh Police arrested two-suspected Pakistanâs Inter Service Intelligence (ISI) individuals over anti-national activities in Bilaspur.[14] This could suggest that ISIS operatives and ISI are attempting to form a possible nexus with Maoists, in order to resurrect Indiaâs Maoist-Naxalite insurgency into lethal revolt and create a considerable threat to the internal security of India in upcoming months.
We are currently raising investment to fund our next phase of growth.
[1] Pandita, R., (2011), Hello Bastar, The untold story of Indiaâs Maoist movement, Tranquebar Press, New Delhi
[2] Singh, V., (2016), Maoists affected 106 districts, http://www.thehindu.com/news/national/Red-Corridor-to-be-redrawn/article14507943.ece
[3] SATP, (2017), 25 districts highly affected, http://www.satp.org/satporgtp/countries/india/maoist/data_sheets/fatalitiesnaxal05-11.htm
[4] The Hindu (2016), Biggest threat-Prime Minster, http://www.thehindu.com/news/national/Naxalism-biggest-threat-to-internal-security-Manmohan/article16302952.ece#!
[5] SATP, (2017), Fatalities in LWE, http://www.satp.org/satporgtp/countries/india/maoist/data_sheets/fatalitiesnaxal05-11.htm
[6] Singh & Sandhu et al, (2017), Naxalism killed 12000 in 20 years- Rajnath Singh, http://indiatoday.intoday.in/story/rajnath-singh-left-wing-extremism-review-meeting-samadhan/1/948290.html
[7] Ministry of Home Affairs India (2017), LWE, http://mha.nic.in/naxal_new
[8] Government of Odisha (2017), Department of Steel & Mines, Natural resource, http://www.orissaminerals.gov.in/website/MineralProc.aspx?GL=mines&PL=2
[9] Ministry of Home Affairs India, (2017), RRP-I, http://mha.nic.in/naxal_new
[10] Ministry of Home Affairs India, (2017), Maoists doctrine, http://mha.nic.in/naxal_new
[11] Mishra, R, (2017), 30,000 security men In region, http://www.hindustantimes.com/india-news/chhattisgarh-suspends-road-construction-crpf-to-begin-ops-against-maoists/story-YH5Y5FGq07vWeDIlkcA8QP.html
[12] Saha, D, (2017), Death in Chhattisgarh from 2011-17, http://www.hindustantimes.com/india-news/for-crpf-in-chhattisgarh-april-deadliest-month-2017-deadliest-year-in-7-yrs/story-9lWxgVFzdUZq1chltARBEK.html
[13] TOI (2016), ISIS operatives contacted Naxalite, http://timesofindia.indiatimes.com/india/ISIS-operatives-in-India-were-in-touch-with-Naxalites-for-terror-training-NIA/articleshow/53287892.cms
[14] Zee News (2017), ISI suspected arrested, http://zeenews.india.com/chhattisgarh/chhattisgarh-two-isi-suspects-arrested-over-anti-national-activities-in-bilaspur-1996602.html
Report written by Gina Laxmicant
Back to Reports & Resources