The 2017 Impunity Score for Mexico and what it means

According to Global Impunity Index, conducted by University of the Americas Puebla, UDLAP Jenkins Graduate School and Centre of Studies on impunity and justice, Mexico is one of five countries in The Americas with one of the highest impunity index scores (69.21 points) and occupies the 66th position out of 193 State Members of the United Nations in the impunity index. Following Mexico, we have Peru, Venezuela, Colombia and Nicaragua. Global Impunity Index measures three dimensions: security, justice and human rights.
Security
Police forces in Mexico are divided into local, national and federal police. Local and national police have only preventive and investigation duties whereas federal police have broader powers such as safeguarding life, integrity, security and human rights, preserving public freedoms, order and peace…
In Mexico, according to the National Survey of Occupation and Employment (ENOE) in the first quarter of 2017 there were approximately 331,000 police officers and agents, of which 82.1% are men and 17.9% are women. According to GII data, in Mexico there are 359 police officers per 100.000 inhabitants whereas the worldwide average is 319 police officers per 100.000 inhabitants. Despite the large number of police officers, thousands of them do not meet the adequate skills to carry out their tasks and conduct investigations.
In 2016, the non-governmental organization âCausa en ComÃºnâ published a report on the Animal Politico News site which brought to light more than 28.000 Mexican police agents who had failed polygraph exams, drug screens or ability tests and have not since been dismissed.
In addition, it should be noted that the Mexican Army has 277.150 active military soldiers under the authority of The Secretariat of Defence (SEDENA). Nevertheless, if we count 81.500 reserve military, 58.900 paramilitary, they have a total of 417.550 soldiers. The Mexican Army have been a key element since the president Felipe CalderÃ³n declared the war on drugs on 2006.
However, these forces do not reduce the social perception of insecurity, indeed, according to an INEGI poll regarding the social perception of insecurity in Mexico, 74,9% of the population consider that living in a city is unsafe. This percent is higher than the one registered in March 2017, where 72,9% of population declared feeling unsafe living in cities.
Cities where the perception of insecurity is higher, are Villahermosa in the State of Tabasco, 96,6% Ecatepec de Morelos in the State of Mexico, Chilpancingo de los Bravo in the State of Guerrero, 94,1% Reynosa in the State of Tamaulipas, 89,6% of the population in Coatzacoalcos in the State of Veracruz and 88,1% in Fresnillo in the State of Zacatecas.
Cities with less perception of insecurity are Puerto Vallarta in the State of Jalisco with 29,5%, 30,7% in Merida within YucatÃ¡n State, 35,3% in Piedras Negras and 35,7% in Saltillo within the State of Coahuila and Durango within the homonymous state with a 37,8% of perception of insecurity.
The number of homicides committed in Mexico is 23.953 in 2016, 20 homicides per 100.000 inhabitants. This rate is higher than the one registered in 2015 with 17 homicides per 100.000 inhabitants.
Homicide rate per 100.000 inhabitants. From 1900 to 2016 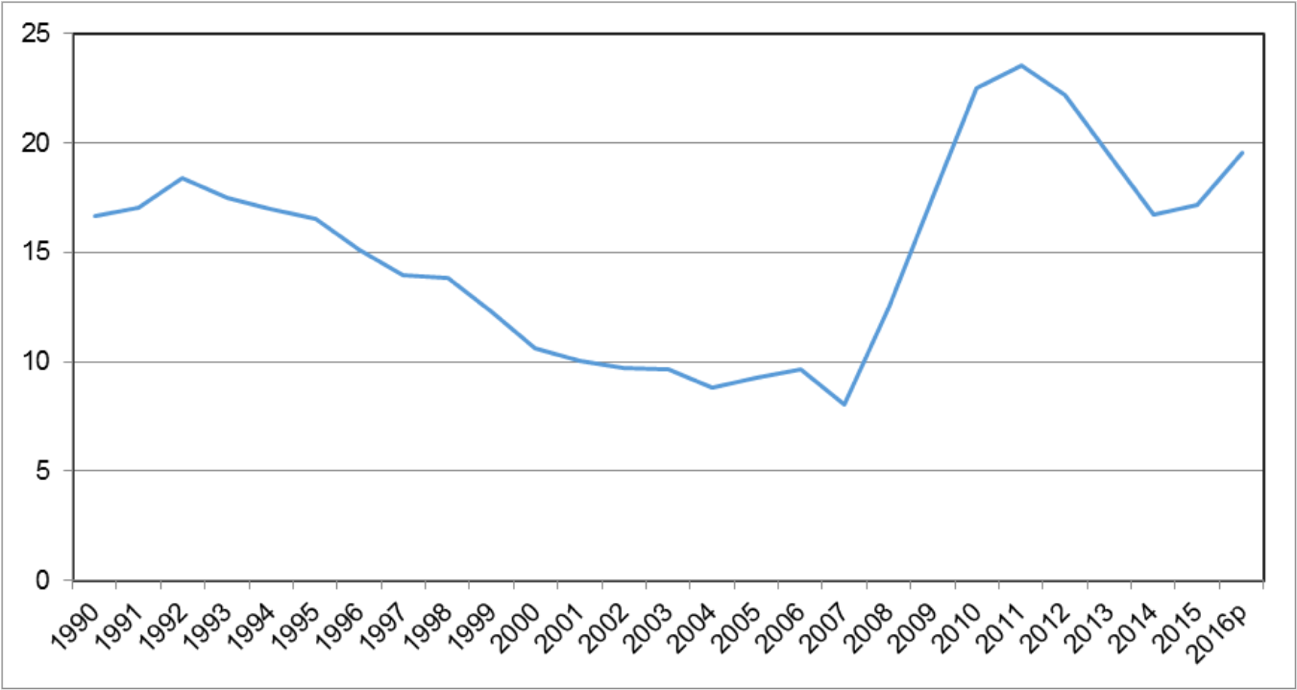 SOURCE: INEGI
In this graphic, we have to take into account: financial crisis in 2008 and the increase of criminal gangs, being the arrest of âEl Chapoâ Guzman the start of national cartel turf war that continues today.
Justice
According to the Global Index Impunity 2017 there is an average of 4.2 judges per 100.000 inhabitants. In comparison with 45 judges per 100.000 inhabitants that Croatia has. Croatia is the country with the lowest impunity index.
It is true that in 2008, Mexicoâs Congress approved reforms on the judicial system. This new system went into effect on June 16, 2016, introducing new oral, adversarial court proceedings, stronger legal protections for victims etc. In a nutshell, this system would help to reduce corruption, impunity and the violation to human rights.
The old judicial model in Mexico had no guarantees for victims to find satisfaction in justice as police and prosecutors assiduously demanded bribes, forced confessions etc.
One year later the Mexican government (Enrique PeÃ±a Nieto administration) has abandoned its support for the reform. Indeed, congressional representatives have begun to call for revisions trying to go back to the old traditional-inquisitorial model.
Human Rights
Grave human right violations are essential to comprehend the high impunity rates. According to the report by Human Rights Watch, in 2016, the government of Enrique PeÃ±a Nieto informed that more than 27.000 people who had gone missing since 2006, still remain unknown. Also, authorities frequently failed to identify body parts or persons buried in clandestine graves.
In addition, in the same year, the National Human Rights Commission (CNDH) concluded that Mexican federal police have arbitrarily executed civilians, tortured detainees, altered crime scenes (moving bodies and planting guns) just in order to justify illegal killings.
Apart from torture we have to add military abuses against civilians as in the case of Tlatlaya, where soldiers killed 22 civilians in 2014, this incident was reported to CNDH. In spite of knowing the facts, a federal court absolved the last of eight soldiers charged with homicide at Tlatlaya in May 2016.
In conclusion, Mexico does need to take urgent measures to reduce the countryâs high impunity index. The security, justice and penitentiary systems must receive more resources to improve their human capacity, infrastructure and professionalisation.
According to the GII report having more effective and independent official evaluation procedures will ensure quality and truthful information of the security and justice systems, and will affect change in institutions and in public policies.
Mexico must address and prioritize its security system and the structure of the judicial system, as violence has not an only cause, it is the result of underlying social and economic conditions that lead citizens to take justice into their own hands.
SOURCES:
Press Release – INEGI â 26th July 2017 â URL: http://www.inegi.org.mx/saladeprensa/boletines/2017/homicidios/homicidios2017_07.pdf
Global Impunity Index conducted by University of the Americas Puebla, UDLAP Jenkins Graduate School, Center of Studies on Impunity and Justice â URL:
http://www.udlap.mx/cesij/files/IGI-2017_eng.pdf
Author Unknown â El Economista News Site â 17th July 2017 â URL:
http://www.eleconomista.net/2017/07/17/la-percepcion-de-inseguridad-en-mexico-sube-al-749-en-junio-segun-sondeo
Author Unknown â ExpansiÃ³n News site â 28th August 2017 â URL:
http://expansion.mx/nacional/2017/08/28/mexico-es-el-cuarto-pais-con-mas-impunidad-del-mundo
Author Unknown â Animal PolÃ­tico News Site â 28th August 2017 â URL:
http://www.animalpolitico.com/2017/08/mexico-cuarto-lugar-paises-mayor-impunidad/
Maureen Meyes â Mexicoâs Police: Many Reforms, Little Progress â May 2014 â URL:
https://www.wola.org/sites/default/files/Mexicos%20Police.pdf
OCTAVIO RODRIGUEZ & DAVID SHIRK – The San Diego Union Tribune â 11th August 2017â URL: http://www.sandiegouniontribune.com/opinion/commentary/sd-mexico-justice-utak-commentary-20170811-story.html
Henry Romero – Human Rights Watch: Mexico, events of 2016 â URL:
https://www.hrw.org/world-report/2017/country-chapters/mexico
Jo Tuckman â The Guardian â 3rd July 2015 â URL: https://www.theguardian.com/world/2015/jul/03/mexican-soldiers-ordered-to-kill-in-san-pedro-limon-claim-rights-activists
Associated Press in Mexico City â The Guardian â 30th March 2016 â URL: https://www.theguardian.com/world/2016/mar/30/mexico-soldiers-acquitted-killing-22-people-tlatlaya
Back to Reports & Resources