At 06:00hrs 22 JAN 2018 (GMT +8hrs), a Vehicle Borne Improvised Explosive Device (VBIED) detonated at the Pimolchai Market in Mueang district, Yala province; killing 3 people and wounding 18. The VBIED appears to have been a gas tank weighing about 20kg, brought in on a motorcycle.

According to police, a young man parked the motorcycle near a stall at the market. The owner of the stall tried to have him move the motorcycle but he ran away when confronted.â¯The woman went over to the motorcycle to move it herself, but the VBIED detonated. She and a male customer were killed instantly while another later died of wounds.

COMMENT. This type of VBIED is nothing new in Southern Thailand. Motorcycles have been used often as well as gas tanks as the main charge. Motorcycles have previously been used to target security personnel but this tactic has been largely unsuccessful. In this instance however, this is an area where numerous motorcycles are parked; making it blend in easily in an area where civilians congregate.

In addition, examination of the incidents shown below indicates insurgents in Yala province are quite capable of conducting effective and varied attacks – murdering security personnel, small arms attacks, IED attacks and complex attacks – many of which have inflicted casualties. However, previous incidents have predominantly targeted security forces ad have been further south rather than civilians and compared to other provinces, insurgents in Yala province have been less active than in Narathiwat and Pattani provinces. 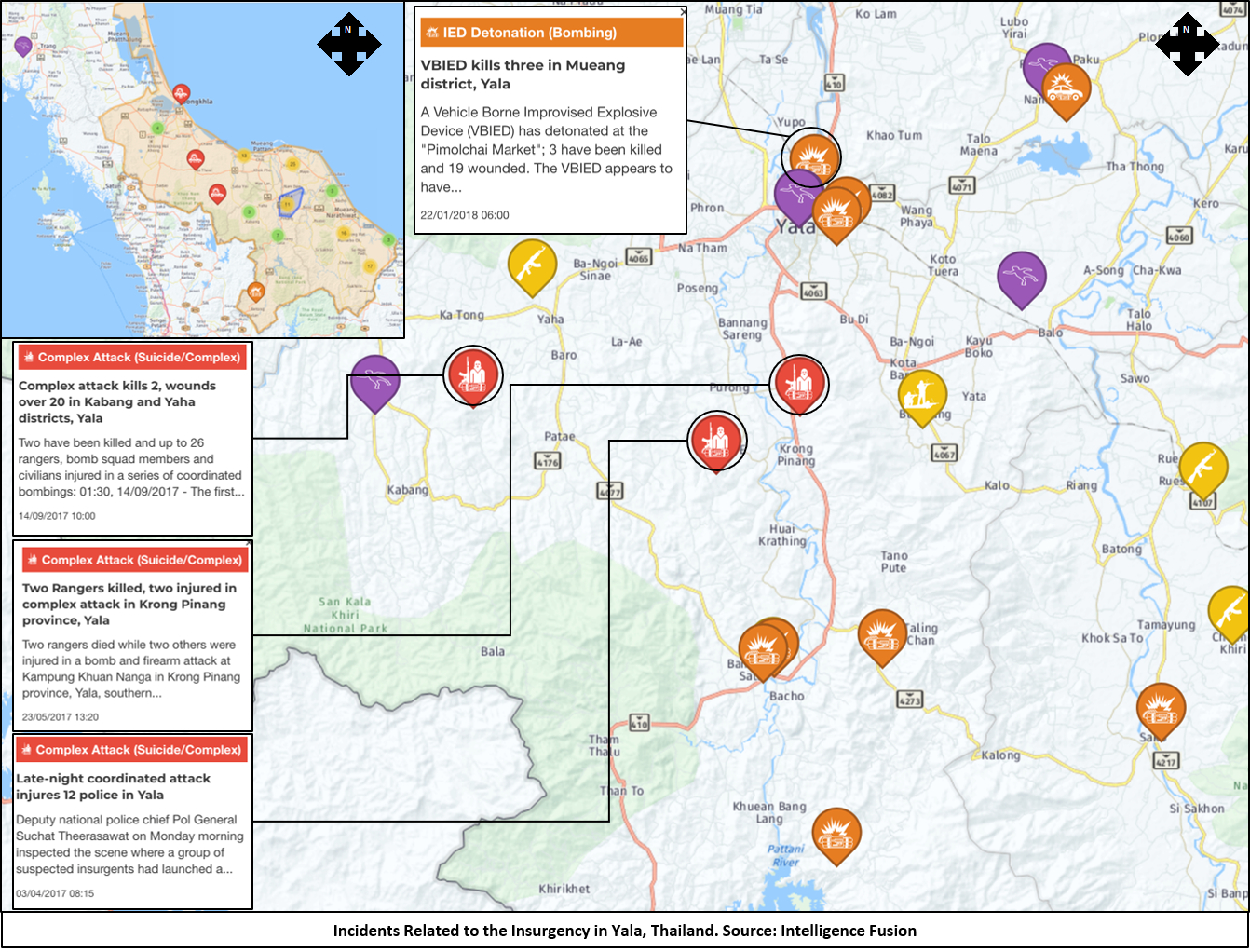 The absence of a group(s) taking credit for attacks in Southern Thailand is a known tactic. However, reports used for plotting insurgent attacks in Southern Thailand have occasionally revealed the names of insurgents, the leaders and where they are predominantly active. Based on what has been recorded from previous incidents and put into link analysis software shown below, there is little known about the group in Yala province; only the name of one previously named insurgent – Useng Thammawitthaya. COMMENT ENDS.

Based on what is known about this attack and previous ones, insurgents in Yala are POTENTIALLY beginning to target civilians with the same tactics they have previously used on security forces. While these insurgents will POSSIBLY become inactive for at least one month, they will POTENTIALLY begin to conduct further attacks in Mueang district of Yala province.

The effectiveness of this attack will POTENTIALLY mean that future attacks in Mueang district will consist of VBIEDs consisting of motorcycles with gas tanks fitted to them as they can easily be placed in areas where motorcycles are parked and thus be concealed.

N.B. – Due to issues with Endnote referencing software, a full reference list cannot be displayed at this time. Links to the sources used for this report can be found at:

NB – To avoid potential misunderstandings surrounding plagiarism, references mentioning myself or the Intelligence Fusion platform are built upon the collection and logging of incidents based on the combination of numerous open sources such as mainstream media, social media and open source mapping tools (The Bangkok Post, The Nation, Thai PBS, Facebook, Google Maps, etc). Details of reports used are available on each incident logged on the Intelligence Fusion platform.