By committing sex attacks, migrants risk being imprisoned in an environment which is a breeding ground of extremism. Sex attacks are also such an emotive crime that it is resulting in a swelling of support for the far right across Europe.
Newsnight reported on the 10th June 2016 that the teenage son of a family that they have followed from Syria to the United Kingdom has been charged at Newcastle Crown Court with sexually assaulting a 14-year-old girl.
John Sweeney stated, âHow we cope with the refugees from a pitiless war is a test in humanity for Europe and for Britain, but itâs also causing great stress, both for the politicians and in the real world. The British Governmentâs response was to allow in 20,00 refugees over five years from countries like Jordan and Lebanon. The refugees were selected by UNHCR, and fast-tracked if they were deemed vulnerable or needed medical help. But at a time when immigration is perhaps the nationâs hottest political issue, some have warned of the risks of countries taking in huge numbers of people from a very different culture. UKIP leader Nigel Farage has drawn criticism this week by raising the spectre of sex attacks by immigrants. The issue of how we as a country handle the tension between common humanity and social cohesion has come into focus here in Newcastle. In the crown court here today, three young men have been charged with sexual assault against a 14-year-old girl. One of them is also charged with sexually assaulting a different 14-year-old girl. All the accused have pleaded not guilty. But at least one of those young men is a Syria refugee on the governmentâs resettlement programme. People in Newcastle are aware of just how sensitive this case is. Newsnight have been following the family of one of those accused in court today, his name is Omar bad Radin, 18, originally from Damascus. The family fled to Jordan, where they were selected by the UNHCR to be resettled in Britain, where they have lived for the last six months. His co-accused who are aged 20, 18, a fourth youth aged 16 has also been charged with sexual assault. All four are believed to be Syrian. A fifth man is on police bail and a sixth has been released with no charges. When this case comes to trial later in the year, itâs bound to be watched closely and not just by people in the northeast. Its outcome could have serious consequences for the governmentâs resettlement programme of Syrian refugees and also for the already fraught politics of immigrationâ.
Impact
The impact of sexual violence by migrants is two-fold. One, the victims of sexual assaults often have both physical trauma and long-term psychological trauma. For rape victims, the more common consequences of sexual violence are those related to reproductive health, mental health, and social well-being. The second impact which I want to go into more detail about is the wider societal implications.
Conflict, poverty and population pressures in Africa and the Middle East are causing mass migration to Europe at such a rate that the host nations are finding it impossible to effectively police, never mind assimilate the new arrivals. These migrants often lack the skills and abilities for the high-tech job market of Europe, leading to unemployment, social deprivation and in many cases criminality.
Path of potential radicalisation
If a migrant commits a sexual offence and is imprisoned, they then enter an environment tailored for radicalisation. A recent study in the UK found that 1,229 inmates out of 5,885 in high-security jails follow the Islamic faith. With such large numbers, many of these inmate Muslims form gangs and a Muslim inmate who newly arrives in prison will likely feel compelled or coerced to join a gang for protection. Within the high-security prisons, terrorists are seen as celebrities and will often use their time to mobilise support, radicalise other prisoners and recreate operational command structures. Prisons provide near-perfect conditions in which radical, religious ideologies can flourish, meaning a person with moderate beliefs may enter the prison system but may leave a radical Muslim. Once that person has left prison, with a radical ideology and a criminal record, their opportunities look bleak in Europe and with a feeling of marginalisation they may channel those grievances into terrorism. 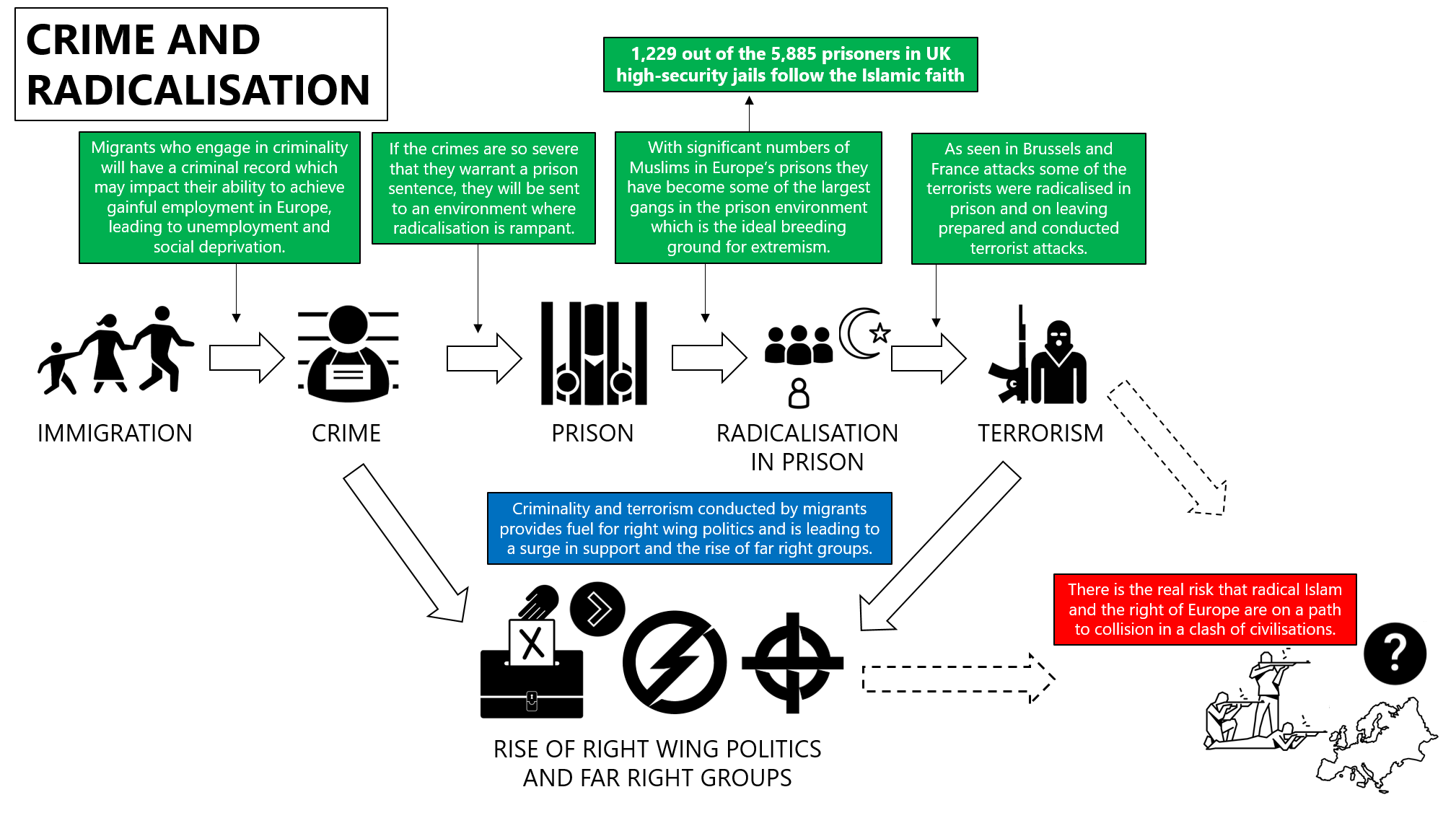 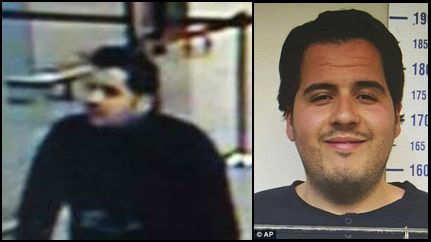 Ibrahim el Bakrahoui dropped out of school and would descend into a life of criminality, before shooting a police officer and being jailed for nine years. During his time in prison, he was radicalised and after being released conducted a suicide bombing at Brussels Airport on 22nd March 2016.

Khalid el Bakraoui, the brother of Ibrahim, also dropped out of school and became a criminal, eventually being sentenced to five years in prison for carjackings and weapons offences. He was also radicalised in prison, with his uncle stating that after prison âeverything was different, his clothes, his demeanour, he was a different personâ. Khalid blew himself up on the second carriage of a metro train at Maelbeek Station on 22nd March 2016.
Consequences of emotive crimes
Crimes such as rape, sexual assault and terrorism are so destructive and emotive, that they can potentially lead to an extreme reaction by the general population. Europe is currently witnessing a surge in support for far-right political parties and an increase in self-defence groups. The reason for this reaction is in part due to Europeâs poor economy but also due to fears regarding migrant criminality and terrorism. In the next few images, I want to highlight countries where migrant sexual offences are significant and how those areas have reacted in support of the right. While sexual offences are not the sole reason for the following responses, it is a major contributory factor and likely only secondary to terrorism.
Norway, Sweden and Finland: Recent Sexual Attacks 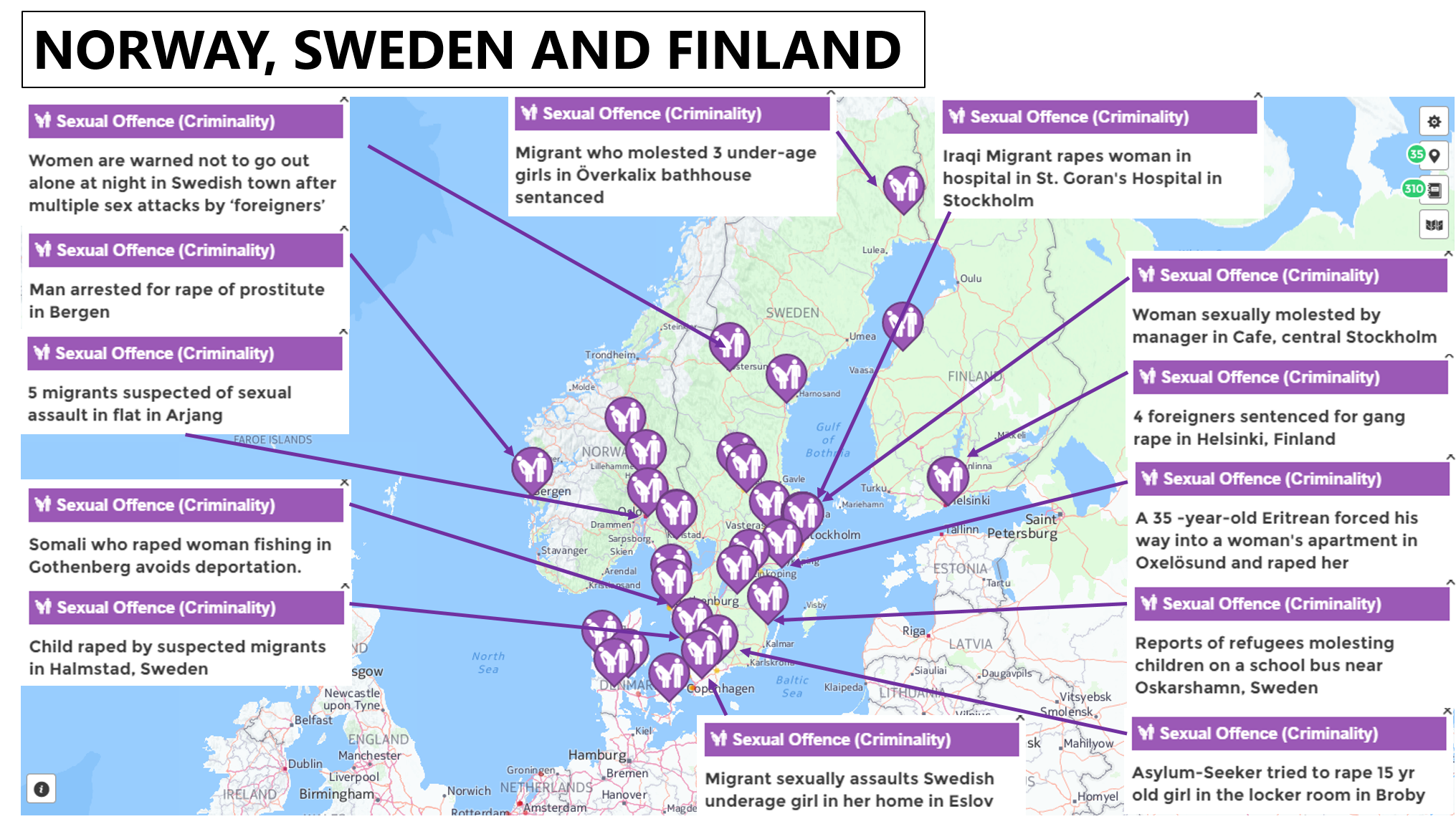 The extreme right wing group Soldiers of Odin, that originated in Finland, claims to have 600 members in more than 25 cells across Finland, Sweden, Norway, Denmark, Poland, Germany, Estonia, Hungary â and in Britain and the United States. The group is hostile towards immigrants and claim to patrol the streets to make them safer for ânormalâ people. A number of the members of the group are convicted felons and there are several members with ties to Neo-Nazi groups.
Germany: Recent Sexual Attacks 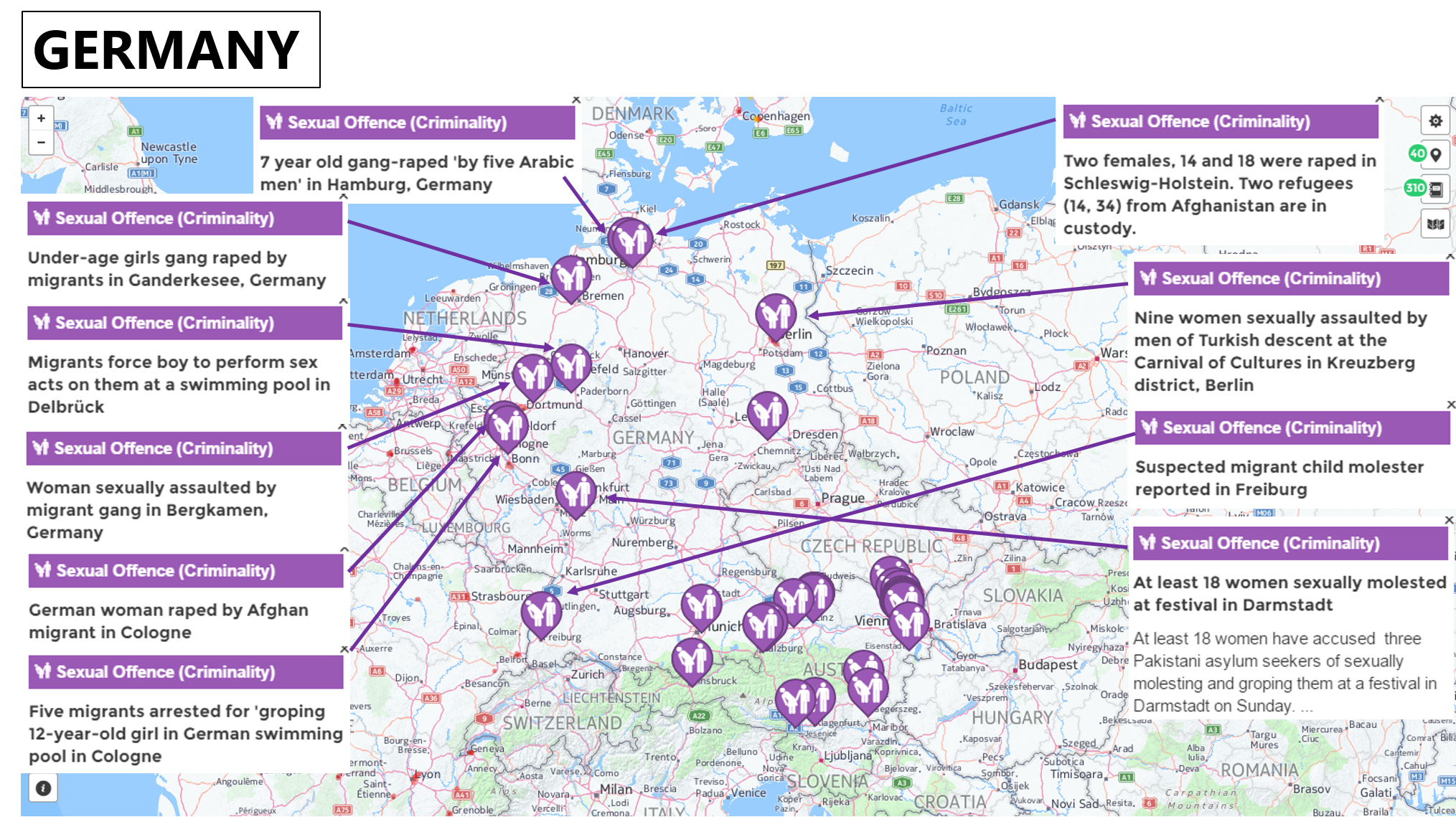 Cologne Sex Attacks
During the 2016 New Yearâs Eve celebrations, hundreds of sexual assaults (including groping), numerous thefts, and at least five rapes were reported in Germany, mainly in Cologne city centre. Similar incidents were reported in Hamburg, Frankfurt, Dortmund, DÃ¼sseldorf, Stuttgart and Bielefeld. All of the incidents involved women being surrounded and assaulted by groups of men on the street. There are more than 1,900 victims and it is reported that up to 1,000 men may have been involved in Cologne, acting in groups of several dozen. Police reported that the perpetrators were men of âArab or North African appearanceâ and said that Germany had never experienced such mass sexual assaults before. 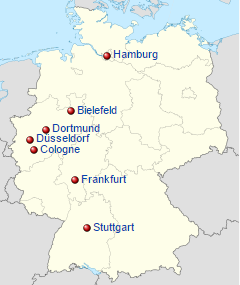 Increase in support of Pegida and far right politics
Patriotic Europeans Against the Islamisation of the West (German: Patriotische EuropÃ¤er gegen die Islamisierung des Abendlandes), abbreviated Pegida, is a far-right political movement founded in Dresden in October 2014. The group aims to resist what it sees as a threat posed by Islamic extremism, Islamisation and calling for the enforcement of existing laws to curb immigration, particularly for Muslims who it views as refusing to integrate. On 26th October 2015, out of 5,000 protesters, âat least 400 right-wing extremists went on a rampage in downtown Cologne during a demonstrationâ by âHooligans Against Salafistsâ. Pegida has spawned a number of smaller offshoots across Germany, including Legida in Leipzig, SÃ¼gida in SÃ¼dthÃ¼ringen,Kagida in Kassel, WÃ¼gida in WÃ¼rzburg, Bogida in Bonn, DÃ¼gida in DÃ¼sseldorf, and Fragida in Frankfurt. The largest Pegida rally was attended by approximately 25,000 people.
Support for the right-wing populist and Eurosceptic Alternative for Germany (AfD) Party is increasing. Opinion polls give the AfD support of up to 14 percent, presenting a serious challenge to Merkelâs conservatives and other established parties ahead of a 2017 federal election, which is even more incredible considering it was only formed three years ago.
Austria: Recent Sexual Attacks 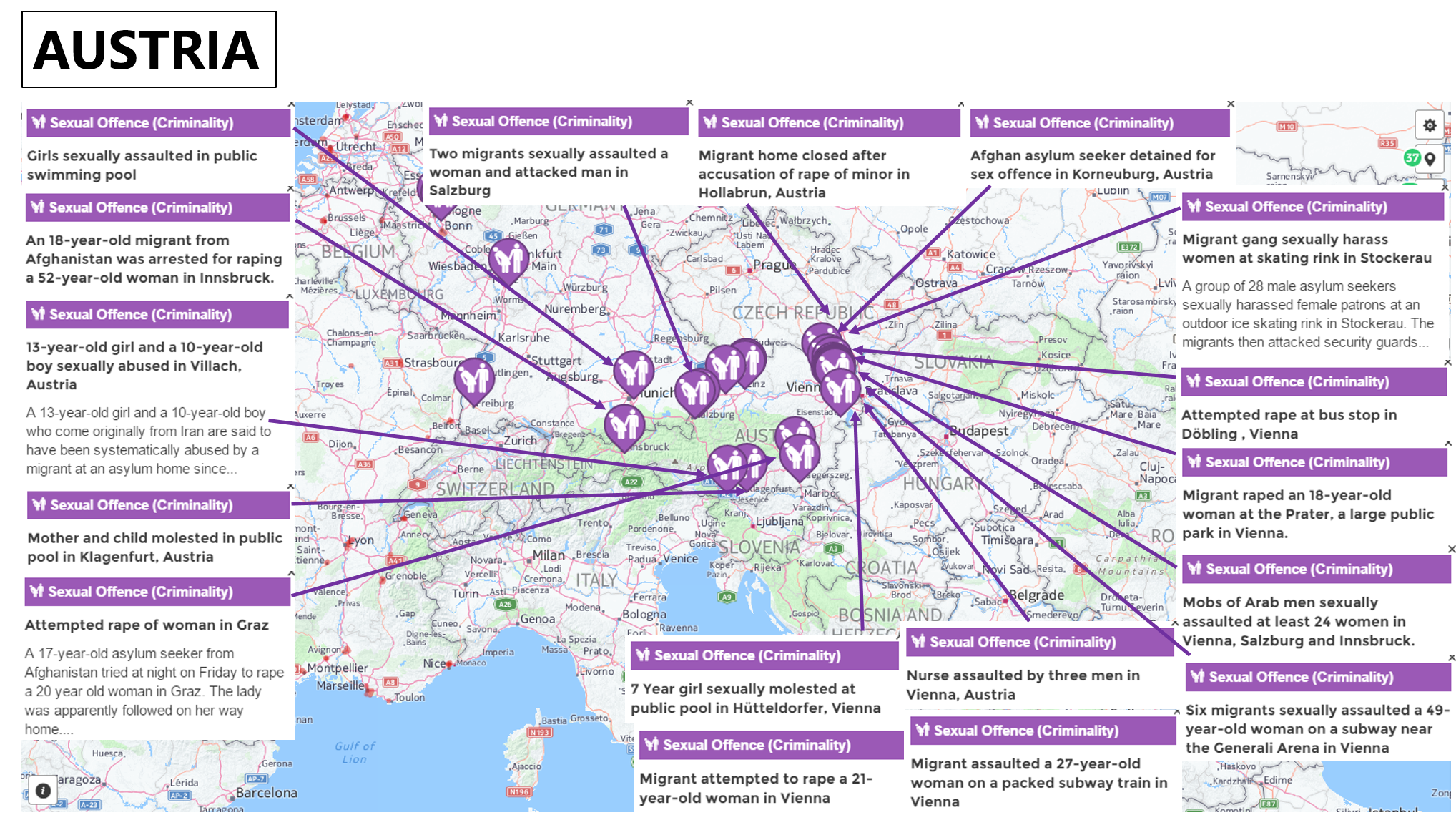 Austria almost elects a far-right president a far-right president
In May 2016, Norbert Hofer a far-right presidential candidate narrowly failed in his election campaign, just losing out to Alexander Van der Bellen, the establishment candidate. The Austrian presidency is a largely ceremonial role but the outcome became hugely symbolic and represented a massive shift in Austrian politics and sets the scene for the September 2018 general election. If elected Norbert Hofer would have been the first far right president elected in the European Union.
Conclusion
Sexual offences have a significant impact on community cohesion, and will not only lead the perpetrators into an environment where they can be radicalised but also serve to radicalise Europeans. With the current situation of European prisons, which have effectively become factories producing Islamic terrorists, Europe is going to witness a generational battle against terrorism. Every terrorist attack, every sexual assault drives a wedge between communities and even though it is a minority of the overall number of migrants, it leads to a fear of migration. That fear has swollen support for the far right and if unchecked and constantly bolstered by new terror atrocities, this will likely lead to an age of right wing politics dominating Europe, which raises the frightening question of what policies would the far right put in place in response to the current situation? To come full circle and bring this back to Newcastle where the post began, this following image shows a group called National Action protesting at Greyâs Monument in January 2016 and speaks for itself. 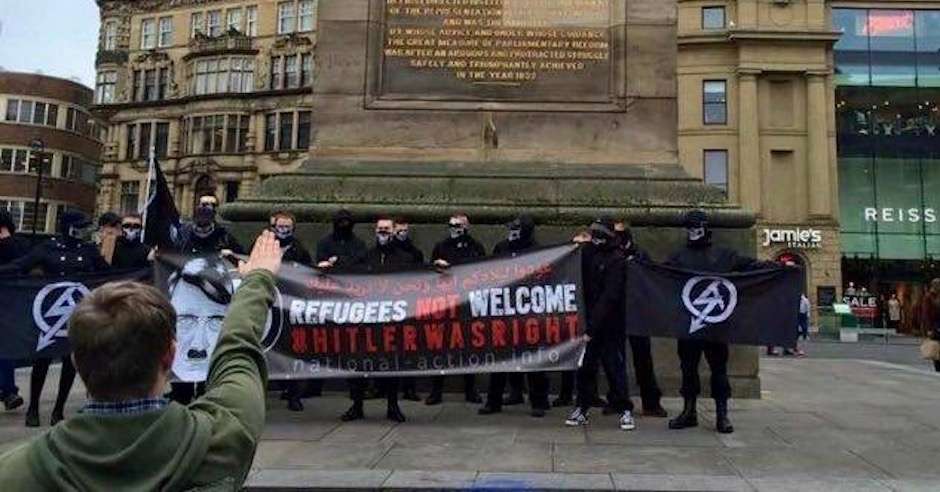