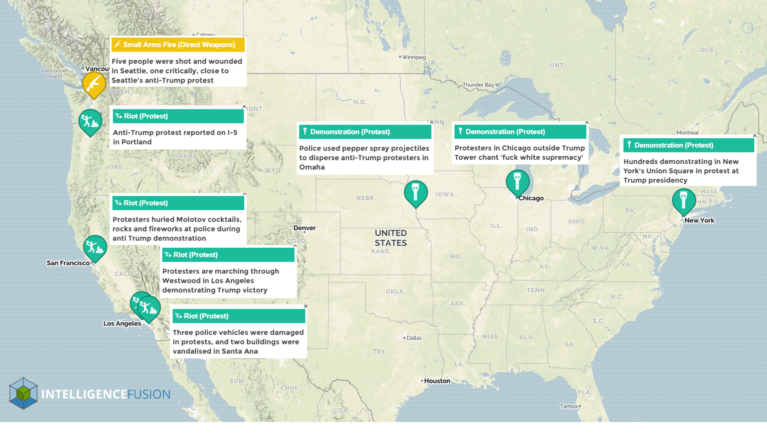 Following the election of Donald Trump on 8th November 2016 there have been protests in dozens of US cities by those disappointed with the result. Trumpâs refusal to state whether he would accept the election result as legitimate during the third presidential debate, the firebombing of a Republican campaign office and a planned attack on a mosque following the election had given the impression of an impending civil war. However, the election fallout has not been as severe as was initially feared following the ugly and exhausting campaign.
There was one spark of election-day violence: a gunman murdered one man and wounded two women in the southern Californian town of Azusa as he fired at a house opposite a polling station. He then killed himself. The incident seems to have been unrelated to the election, though one of the wounded women had been on her way to vote.
Internationally, there has also been a relatively muted response, with global leaders congratulating Trump on his victory. There had been concerns that US rivals and challengers might take exploit the US election to take action in a range of theatres. However, neither Russia, China nor North Korea took drastic action beyond a planned resumption of US airstrikes in Aleppo. Putin stated he hoped Trump would cooperate to improve Russian-American relations while North Korea and China did not cover the election in great detail. East Asian stock markets did suffer following the election of Trump, who is widely perceived as a less dependable bulwark against Chinese ambitions in the theatre than Hillary Clinton would have been.
Anti-Trump protests
New York
Barriers were erected around Trump Tower in New York as c.5,000 protesters gathered outside Trump Tower, including musician Lady Gaga, a prominent supporter of Hillary Clinton. New York police arrested 15 for disorderly conduct. Furthermore, c. 200 people protested outside Donald Trumpâs house.
Chicago
Thousands marched through Chicagoâs âLoopâ, its central business district, before gathering in front of the cityâs Trump Hotel and Tower.
Boston
Protesters gathered Bostonâs Copley Square, having gathered at the Boston Common. A Boston police officer stated c.4,000 people participated in the protests.
Omaha
Police used pepper spray projectilse to disperse anti-Trump protesters. Two were arrested for obstructing justice and assembling unlawfully, according to an Omaha Police Department spokesman.
Los Angeles
28 were arrested for impeding traffic on the 101 Freeway. A Donald Trump effigy was burnt in front of Los Angelesâs city hall. Rocks and bottles were thrown at the police but no one was injured.
Santa Ana
Three police vehicles were damaged in protests, and two buildings were vandalised. Bean bags were fired to disperse crowds.
Seattle
Five people were wounded in Seattle, one critically, close to Seattleâs anti-Trump protest. However the incident does not seem to have been politically motivated.
Oakland
Violent protests took place in Oakland, California. 30 protesters were arrested for assaulting a police officer, unlawful assembly, failure to disperse and firearm possession. Three police officers were injured. The police used tear gas to control crowds throwing rocks, bottles, fireworks, Molotov cocktails and firecrackers. Extra police were brought in from towns around Oakland. The Oakland fire department extinguished 40 fires.
Portland
Police declared an anti-Trump protest a riot after demonstrators threw rocks, smashed windows and started fires. Police officers said they saw protesters carrying bats and rocks in a menacing manner.
London
There was a peaceful protest outside the US embassy in London.