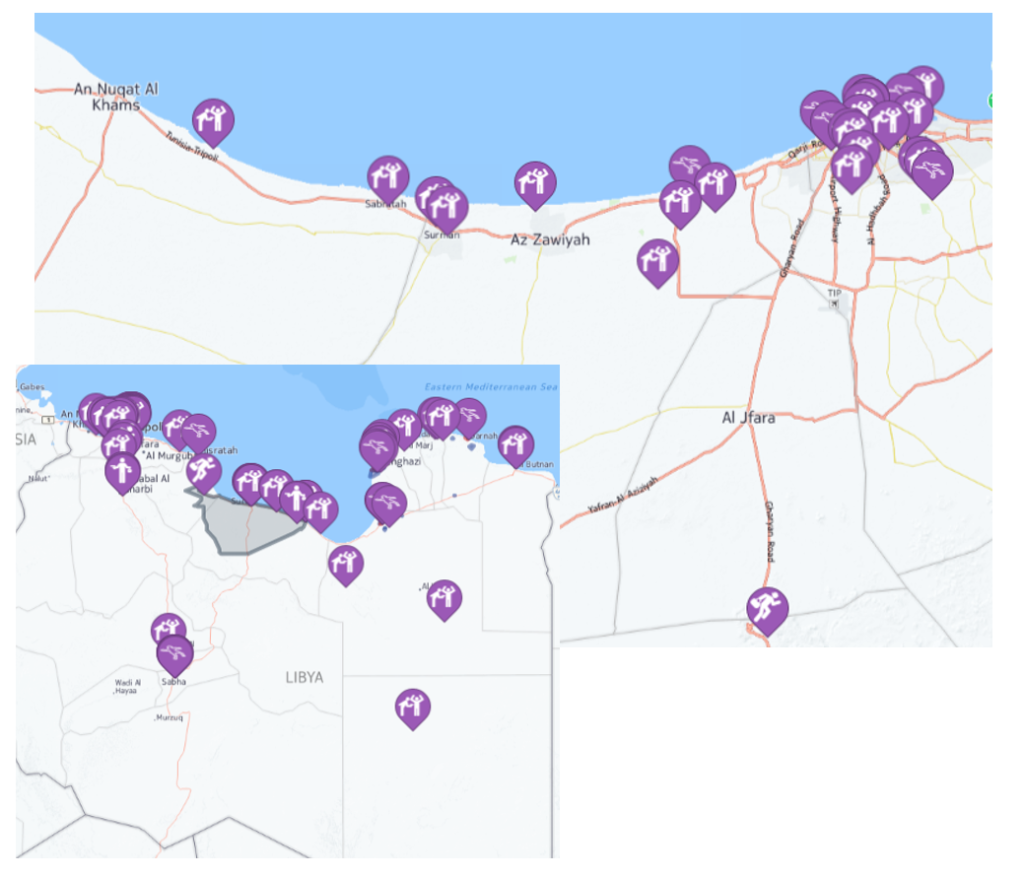 The anarchy that ensued after the toppling of the Gaddafi regime created conditions which fostered a high crime rate. Since our analysis on Libya began, in November 2015, we have found crime to be mostly concentrated in Sabratha, Surman, Zawiyah, Tripoli (south and west), Gharyan and Sabha.
The Wershefanna area has seen some brutal kidnappings and murders (related to kidnapping for ransom). The media have reported on gruesome murders of children and adults in this area. Certainly, from Sabratha to Tripoli (west and south, including Gharyan) kidnap for ransom risk is higher than any other region in Libya. In the first week of May 2016, there were a spate of kidnappings and assasinations of twelve former security officials. In terms of criminality Sabha and Fezzan is arguably the most dangerous city in Libya. According to local media, so far this year: 77 citizens have been killed, 43 citizens have been kidnapped for ransom, 186 vehicles stolen (armed robbery), there is high rate of theft of metal, armed robbery, phones, credit cards, handbags, livestock. To put this into perspective, there have been 22-34 incidences of criminality (murder, kidnap, armed robbery, gang activity) in Tripoli so far this year. Perhaps the safest city in Libya is Misrata. The only caveat is that not all kidnapping and robbery are reported. In Barqah, although kidnappings and murder do occur, security seems to be better organised. With the exceptions of Benghazi and Derna, where civilians are killed by IEDs/mines, shells, snipers and airstrikes, all other cities witness fewer crime than in Tarabulus and Fezzan. However, crime is still high. Other organisations have also carried out research, some evidence-based (Libyabodycount.org) and other perception-based. 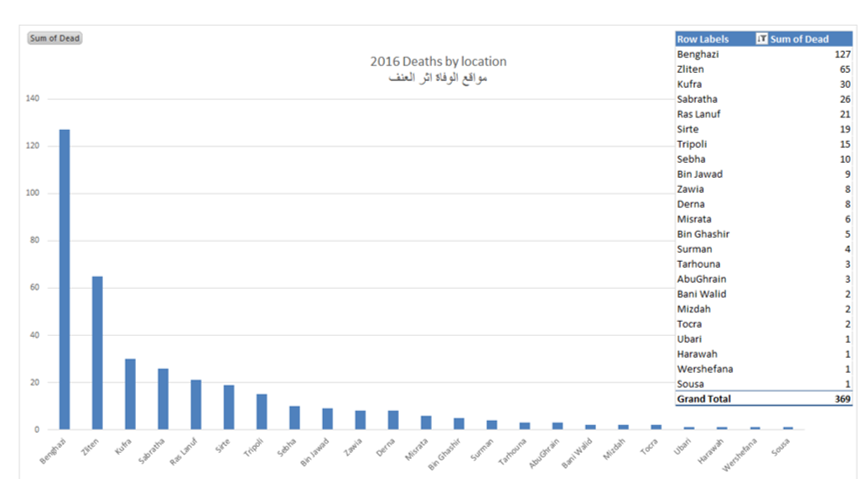 The extensive research carried out by Libyabodycount.org include war crimes and terrorist attacks just as Intelligence Fusionâs map below illustrates. 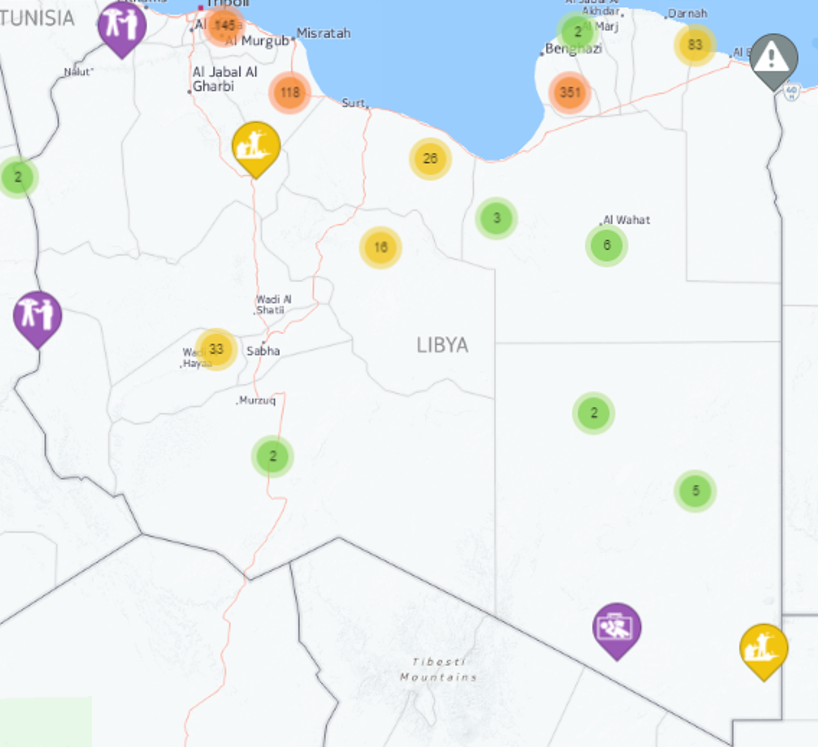 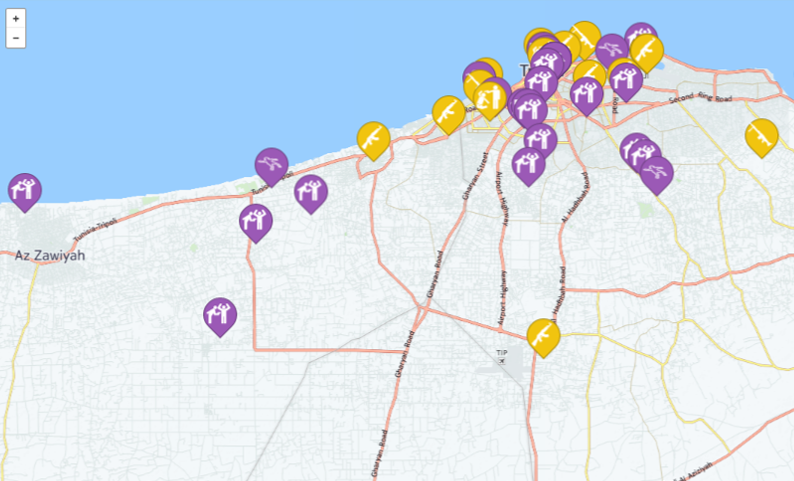 Kidnap for ransom is particularly high in the area highlighted above. Gangs in the Wershefana region seem to be actively engaged in organised kidnap for ransom activities. 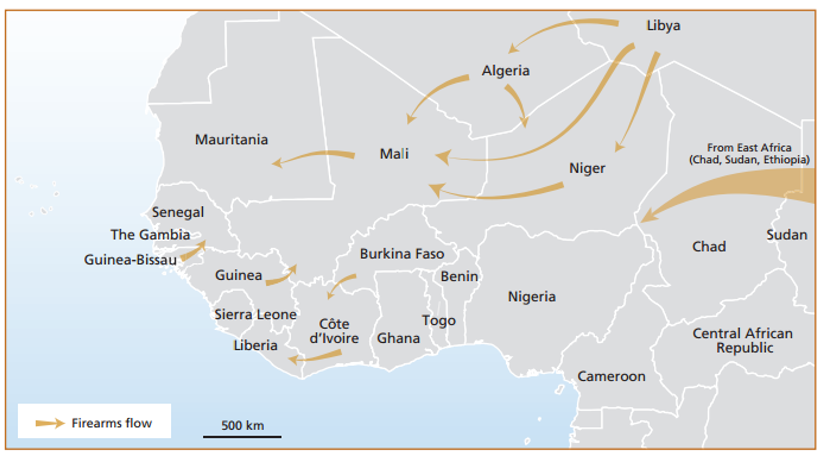 The total amount of Gaddafiâs arsenal is not known, but what is well-known is the large soldier-weapon ration. Estimates put this ratio at between 2-6 arms per soldier, IISS claim there are 76,000 active personnel and 40,000 reserve personnel in Libya. The UN claim there are between 250,000 and 700,000 firearms (median of 450,000), of which (based on typical arsenal composition), with 70% to 80% likely to be assault rifles. A majority of military hardware Gaddafi amassed was sitting in arms depots and warehouses, that number about 100, scattered around the country. Some weapons have also been found scattered in the desert, as shown in this video (found near a checkpoint between Wadan and Sirte).
An assessment of Gaddafiâs arsenal is difficult to ascertain. According to The Guardianâs investigation: Libya spent approximately US$30 billion on weapons between 1970 to 2009, most armaments (US $22 billion) purchased from USSR and Russia. After the arms embargo was lifted in 2004, Gaddafi acquired massive amounts of sophisticated weaponry from western powers (France and Germany earning US$3.2bn and $1.4bn). With an arms embargo in place, Gaddafi turned to alternative arms exporters. Gaddafi spent what remained of his personal fortune, between US$70bn to US$100bn, prior to 2011 arms embargo on importing arms from Belarus. Former Belarus dictator admitted to exporting $1.1bn in arms to Libya between 1996 and 2006. Between 2005 and 2009, once economic sanctions and the arms embargo was lifted EU arms exports picked up rapidly, the table below depicts arms exports to Libya in this time period.
These firearms could be sold, albeit for relatively low prices per unit, to any of a number of rebel or criminal groups in West Africa. According to the UNODCâs comprehensive report, seizures of illicit arms reveal their sources, in total five, one of which is from neighbouring countries or regions. Since the Libyan conflict began in 2011, there has been a considerable escalation of arms seizures in northern Niger and southern Algeria. 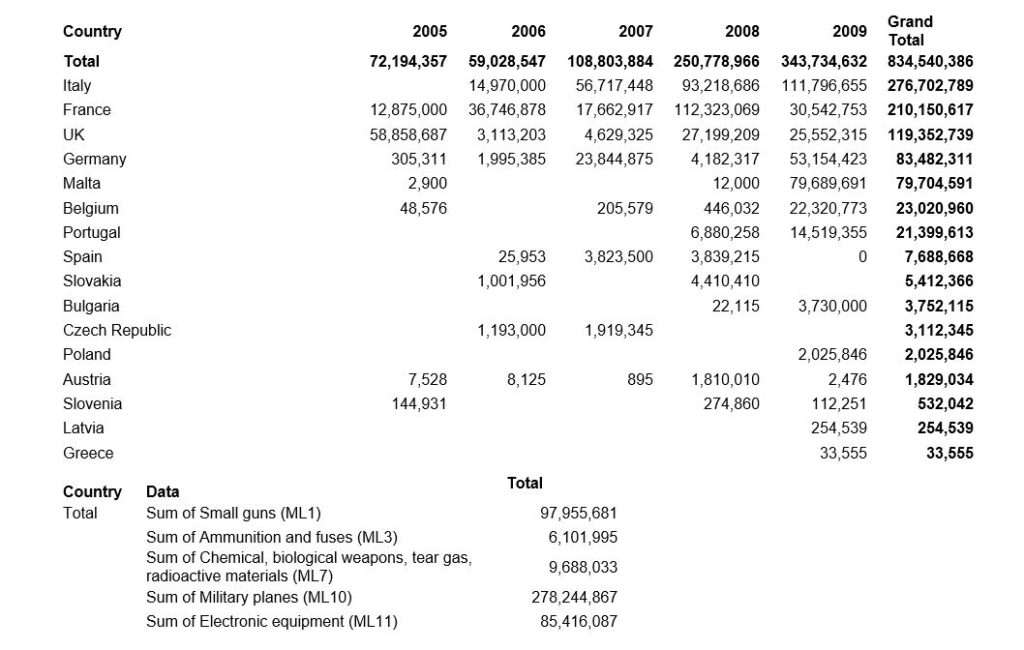 UNODC have found small and heavy weapons originating from Libya in Mali including ammunition from UAE, who, along with Egypt, are thought to supply the Tobruk government with military hardware and armaments. In 2011, Nigerian security forces apprehended 640 kg of Semtex and detonators destined for AQIM in Mali. In 2014, French troops intercepted and destroyed an AQIM convoy (six vehicles) in northern Niger thought to be destined for AQIM in northern Mali. Weapons include missiles for use in MANPADS (approx. 17,000 remain unaccounted for), 23mm anti-air cannon, 7.62 to 23mm ammunition (including high calibre ammunition), machine guns and 100 anti-tank rockets have also been found in Niger. The flow of weapons such as these from Libya were a contributory factor in the Tuareg rebellion. Tribes in southern Libya have claimed control over trafficking routes. Awlad Suleiman, Qadhadhfa and Warfalla tribes were traditionally in control of trafficking routes with the Tebu playing roles lower down the echelons of trafficking. After the convulsions in the region and country, fighting broke out over control of routes and markets. The Tebu gained control of southern borders and utilised contraband routes through Kufra (the small arms survey 2015).
According to local officials, smuggling accounts for 70% of the economy in the south. The Tuareg and Tebu tribes were â and still are â marginalized during Gaddafiâs reign, they lack the access to economic opportunities, or those that exist at least. Both are considered to be non-Libyan in identity and therefore have little choice but to operate within the informal economy in a region they know to the core. The Tuareg utilise cross-border kinship ties in Chad, Niger, Mali and Algeria; as do the Tebu, in Chad, Niger and Sudan. Tribes in major southern cities are highly likely to play a role in illicit activities, as well as those tribes who regularly use trade routes and live near border areas. Other groups such as AQIM and Sudanese JEM and SLM have cross-border presence. In Libya, southern Libyan Arab tribes such as: Zway, Magarha, Hasawna, Gaddadfa and Awlad Abu Seif could be playing a role in illicit activity in the south. Though illicit activity does not necessarily correlate with tribal affiliations even though tribal affiliations play a role in the behaviour of an individual. Generalisations cannot be made.
Since ISâs growth in Libya, Tunisia, Sudan, Algeria, Niger, Egypt and Chad have improved border controls to varying degrees, their efficacy obviously not high as cross-border illicit activities are still a regular occurrence. 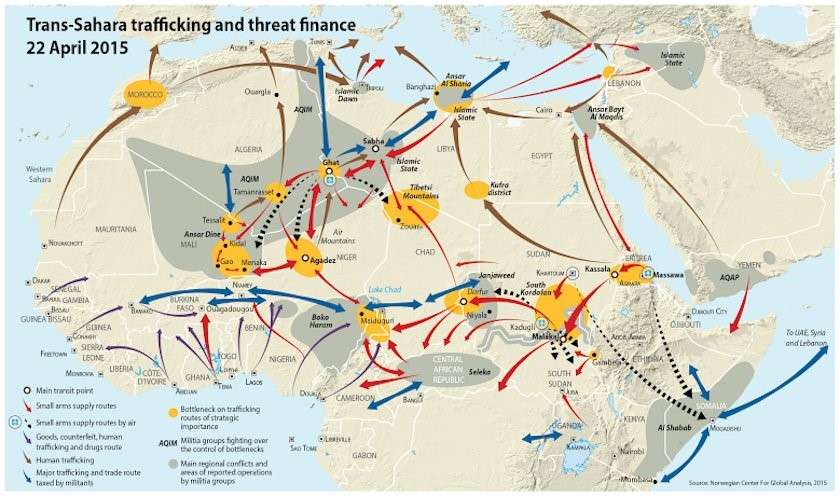 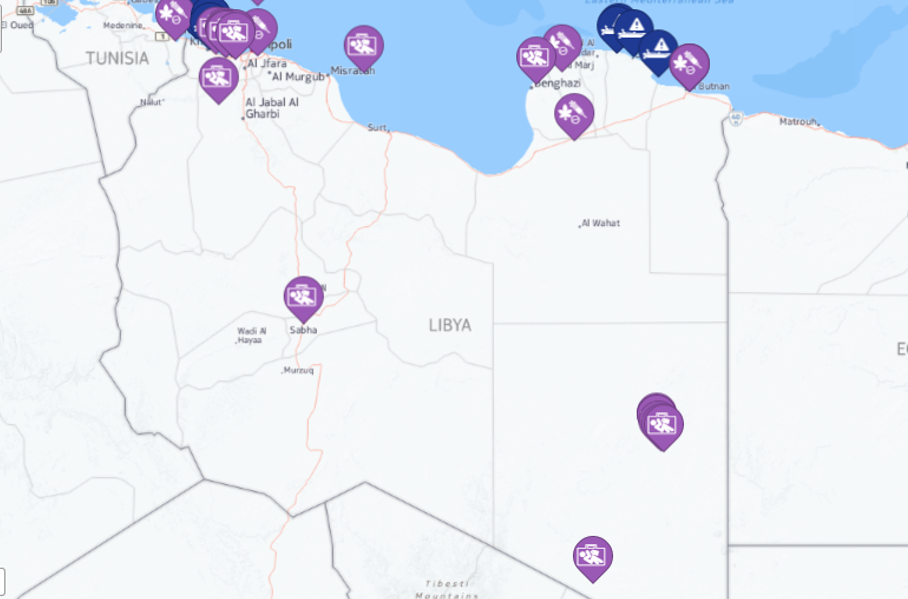 Maritime incidents
Maritime incidents, since November 2015, close to the Libyan coast vary depending on region. Close to Derna, the Libyan Navy have intercepted foreign ships. The LNA affiliated Libyan Navy have established a no-sail zone in the area stretching from Al Haniyah and Kirissah . Reasons for this no-sail zone are very likely to isolate IS and Mujahideen Shura Council Derna (MSCD) from supplies to solidify security in cities east of Derna and prevent any cooperation with groups which adhere to a similar ideology. The Libyan Navy now also say they are in control of Benghaziâs coastal waters. Since the start of the year, the Libyan Air Force and navy have targeted vessels which they say were loaded with military supplies from Misrata and are intended to supply Jihadist groups in Benghazi. They have since taken control of MâReissa port. The LNA affiliated navy have also intercepted international cargo ships that have strayed into Libyan territory.
Human Trafficking and Smuggling
In terms of risk, it would make little sense for smugglers and traffickers to use the Barqah route given the instability in Benghazi, Derna, and Ajdabiya. Furthermore, the distance to Lampedusa, Malta and Sicily is larger from eastern cities than from Libyaâs west coast. This is not to say that traffickers do not use eastern Libyan cities to set migrants off to Europe. With recent conflict between Tuareg and Tebu, the Tebu are likely to use routes that circumvent Sabha. Routes within Libya also depend on what border point migrants entered into Libya from. 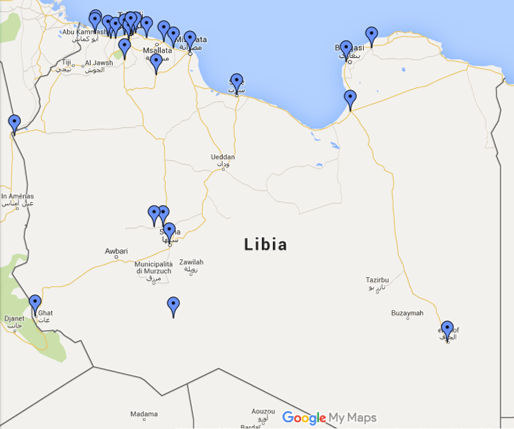 Migrant detention centres are run by militias who often collude with smugglers and traffickers to extort migrants. As you can see, most centres are in the western region, this in itself an indication that smugglers/traffickers use the western route. News reports suggest IS are making a fortune in assisting smugglers and recruiting from migrants, especially Arabic speaking migrants. 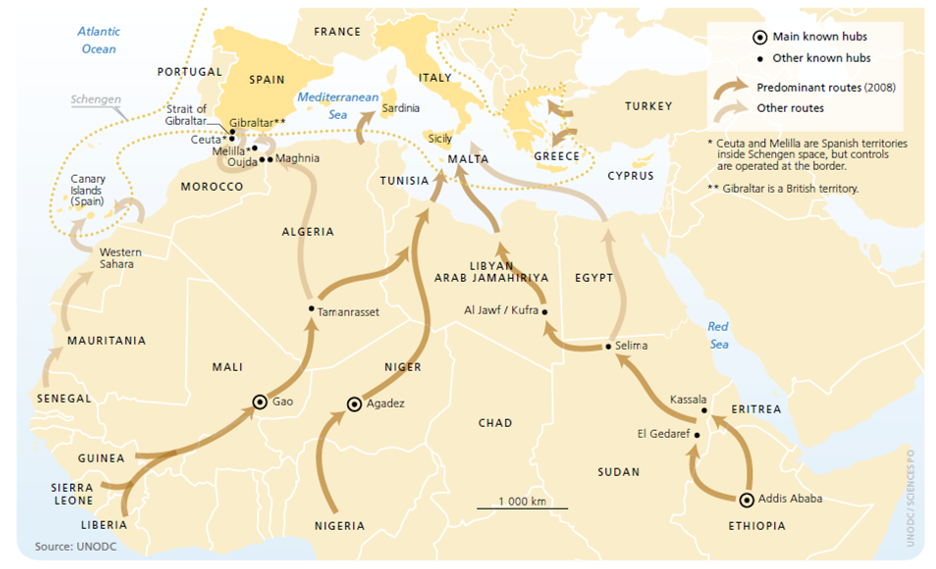 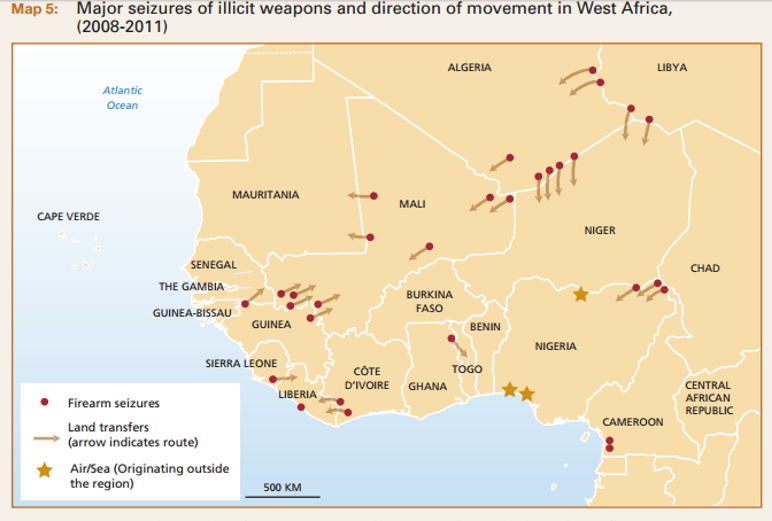 Notable incidents
Interestingly, security forces in Tobruk, Benghazi and Tripoli have seized large amounts of Tramadol, a strong prescription painkiller which, according to WHO, is used to treat both acute and chronic pain of moderate to (moderately) severe intensity. It is also one that if taken recreationally, reduces feeling of anxiety. Libya could be a transit country for Tramadol, but there might also be a market â licit (given Libyaâs precarious medical situation) and illicit (due to the effect of war on some). 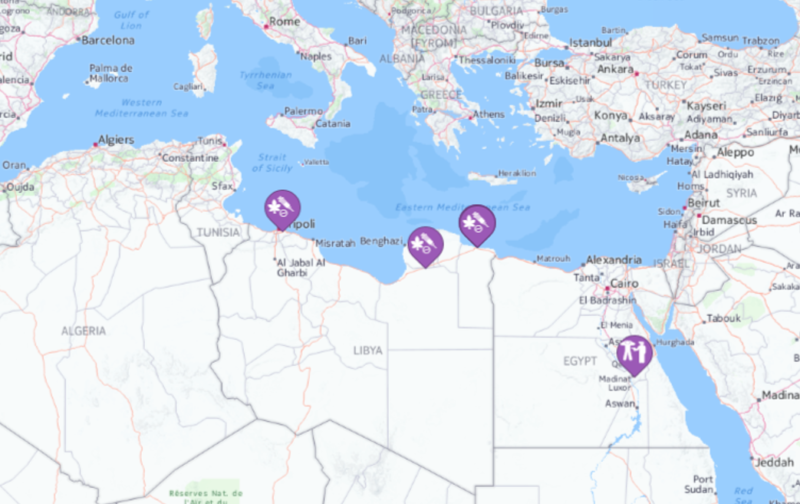 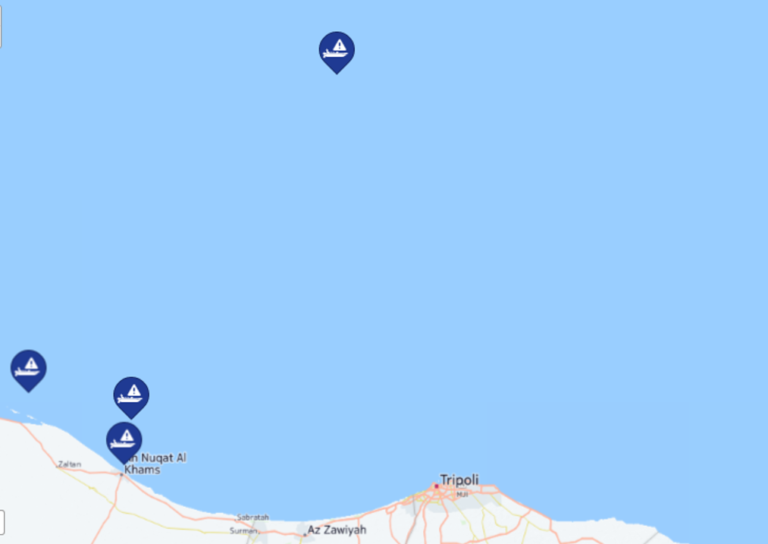 Four times, since 27th December 2015. The West Libyan Navy have intercepted four tankers off the coast of Zuwarah (including one near the off shore Boura Oil Field). It cannot be known for certain where these tankers were headed, however, on one occasion a tanker headed towards Malta, another bearing the flag of Togo. Due to frequent closure of the Ras Jedir border crossing, we can postulate most tankers head towards Tunisia. The west Libyan Navy claim: they have seized 64 vessels between 2012 and 2016 (first quarter), illegal fishing is the largest illicit activity in Libyan coastal waters followed by oil smuggling. Considerable amounts of cocaine, heroine, hashish, cigarrettes and Tramadol have also been seized on Libyan coastal waters. Their statistics cannot be substantiated. However, mediterrenean and African maritiime security is a multifaceted challenge, so illicit activity, particularly outside the EUâs territorial waters, does not come as a surprise. 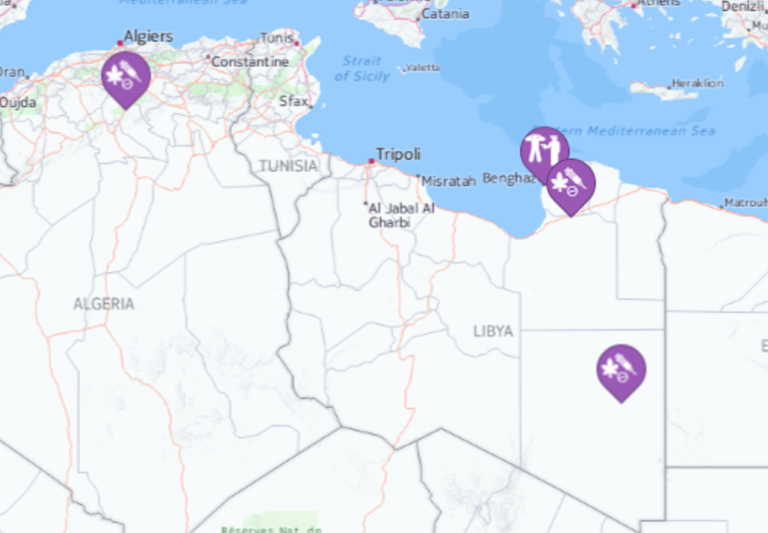 Seizure in Algeria was purported to be heading towards Libya. Hashish can be assumed to be headed towards the lucrative European market, though less-lucrative markets in transit countries also exist. Seizures vary in size, the smallest being 500g and the largest being 7kg.
Gun Markets
The BBC reported in April of the burgeoning weapons trade in Libya. Ordinary people participating in the trade of arms across sites, including Facebook, Instagram, WhatsApp and Telegram, and found the largest volume of sales on Facebook. The Kalashnikov assault rifle sells for and average price of Â£930 while you can also acquire anti-aircraft guns for Â£44,000 complete with a truck. With such equipment freely available, it does not bode well for stability in the country and region. 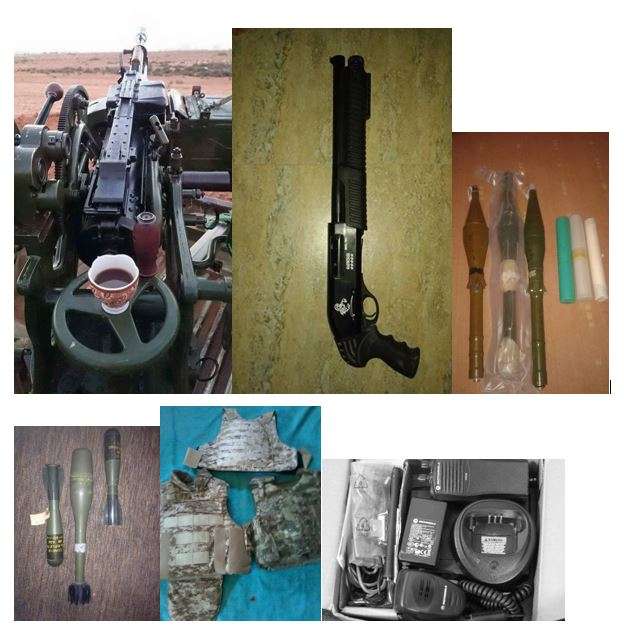 The military equipment above Intelligence Fusion has found can be readily purchased in Libya. IEDs and terrorist/crime operations can be easily organised as a result. Given the almost non-existent rule of law, the lack of capacity and authority of functioning law enforcement, and the dispersal of power in Libya instability, crime, and organised crime will continue.
Back to Reports & Resources