Combatants in the Battle of Mosul 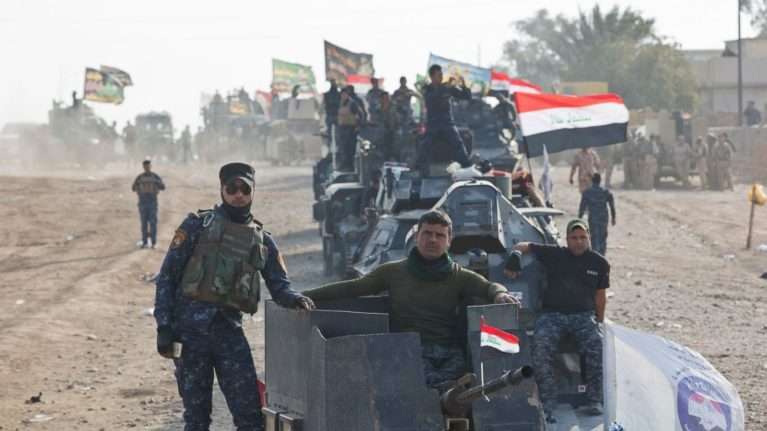 Haider al-Abadiâs government of Iraq finds its sovereignty and authority undermined not only by ISIS but by a range of foreign powers, proxy forces and semi-autonomous militias, even as it is propped up by foreign powers. The siege of Mosul illustrates the kaleidoscope of organisations at work in a riven country.
Iraq
The Iraqi Army failed in its duty when ISIS first captured Mosul in 2014. Thousands of soldiers withdrew, with barely a shot fired, in the face of far fewer and less-well equipped ISIS fighters. Two years on, and the Iraqi Army has returned in force: 25,000 soldiers and special forces are closing on the city from the south, staging from the reconstructed Qayyarah Airport. The plan is clear, modelled on the seizure of Fallujah from ISIS in June 2016. 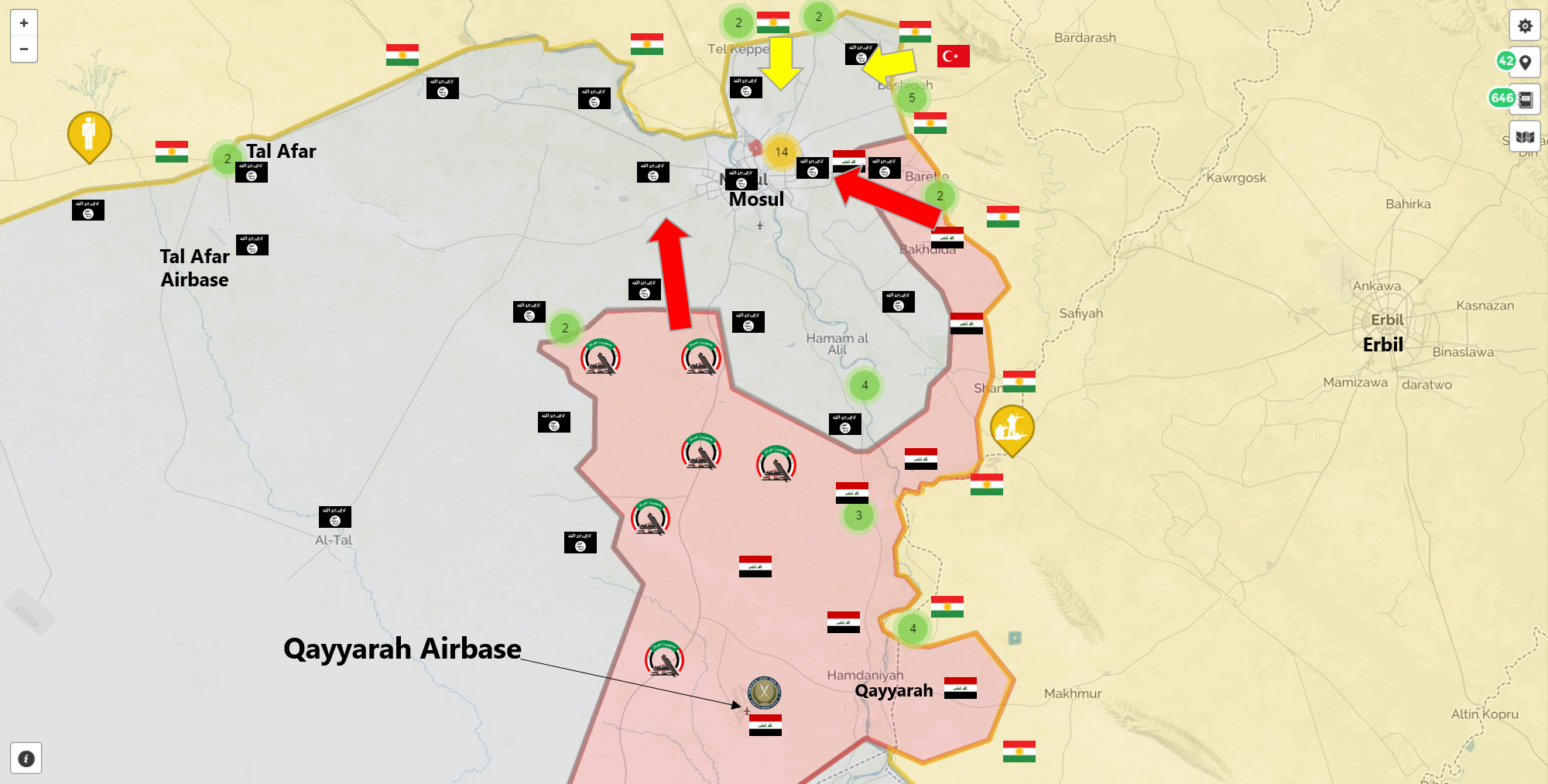 Mosul is to be surrounded, then squeezed, with special forces leading the way, followed up by regular soldiers and finally the Iraqi police, ready to restore civilian control. As the Iraqi Armyâs main offensive is driving in from the east, taking Bazwaia and entering Gagjali, the Popular Mobilisation Units are pushing north in order to cut off the desert area to the west of Mosul. With Kurds blocking the area west of Tal Afar, while their forces attack Tal Afar, Islamic State will soon lose their ability to flee to Syria.
In the case of the retaking of Ramadi, Iraqi offensives would push into the city, from multiple different points with the aim of unbalancing the smaller Islamic State force, however, often the ferocity of the Islamic State defending forces would see Iraqi offensives withdraw due to suicide attacks and pre-prepared ambushes. Today we witnessed what appears to be another tactic Islamic State is going to use to defend Mosul, which will dramatically slow down the offensive. 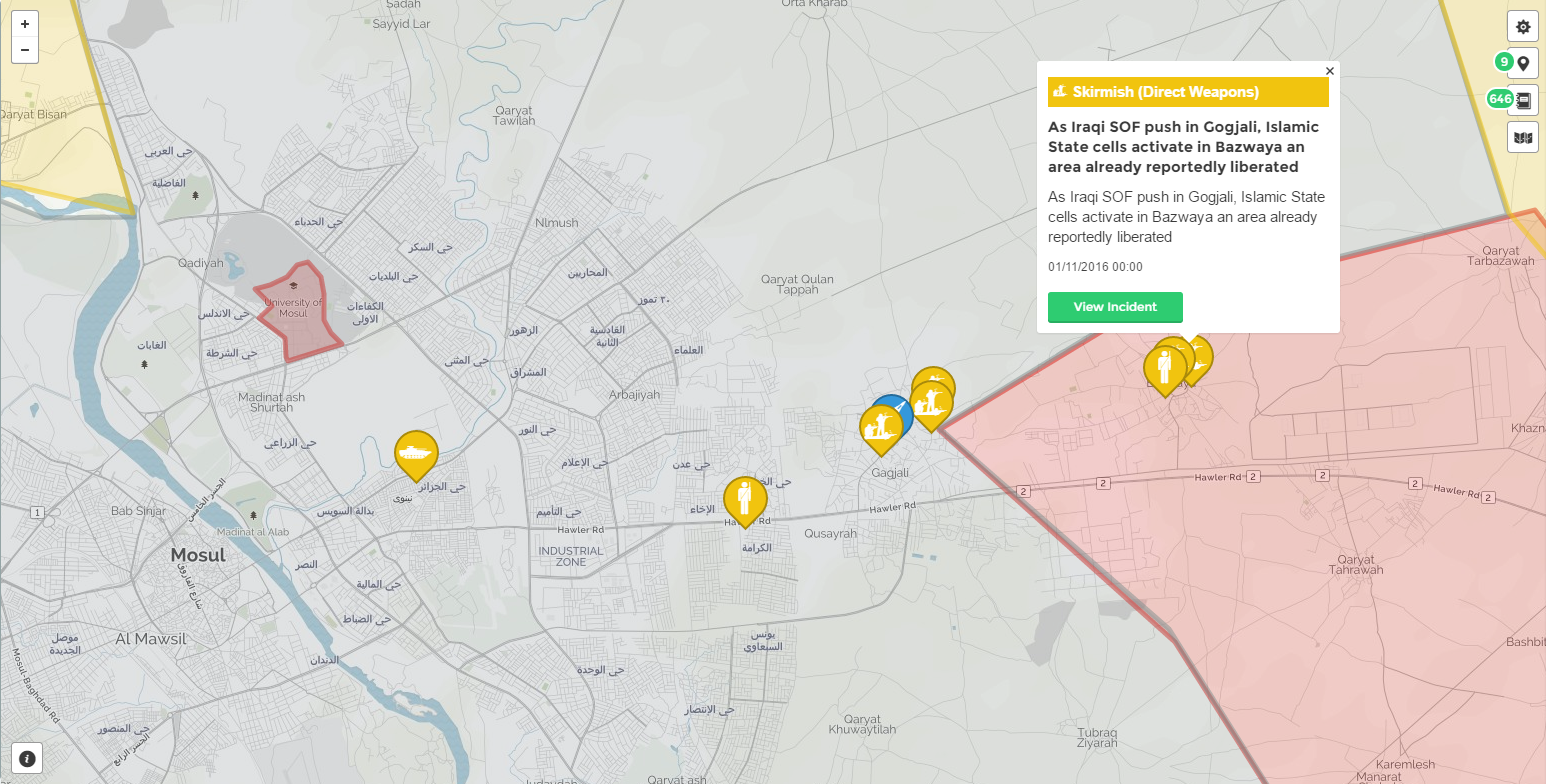 As Iraqi Special Operations Forces pushed into Gagjali from Bazwaia, an area they had just liberated, Islamic State cells in Bazwaia activated attacking Iraqi forces behind the front line. Any Iraqi plan to surge into the centre of Mosul, will be called into question following this attack. Iraqi forces will now have to slowly and effectively clear each area they move through to prevent rear echelon attacks.
Combined Joint Task Force â Operation Inherent Resolve
The USA has increased its commitment of soldiers in order to support the Iraqi Army. Helicopters and bombers are providing much-needed and morale-boosting precision firepower, which will be invaluable in order to avoid civilian casualties in Mosul (especially if we consider the outcry over Russian airstrikes on Aleppo). 600 American advisors are training and supporting the Iraqi Army around Mosul, while in the entire country there are c.6,000 American servicemen and women, and c.2,000 private contractors. 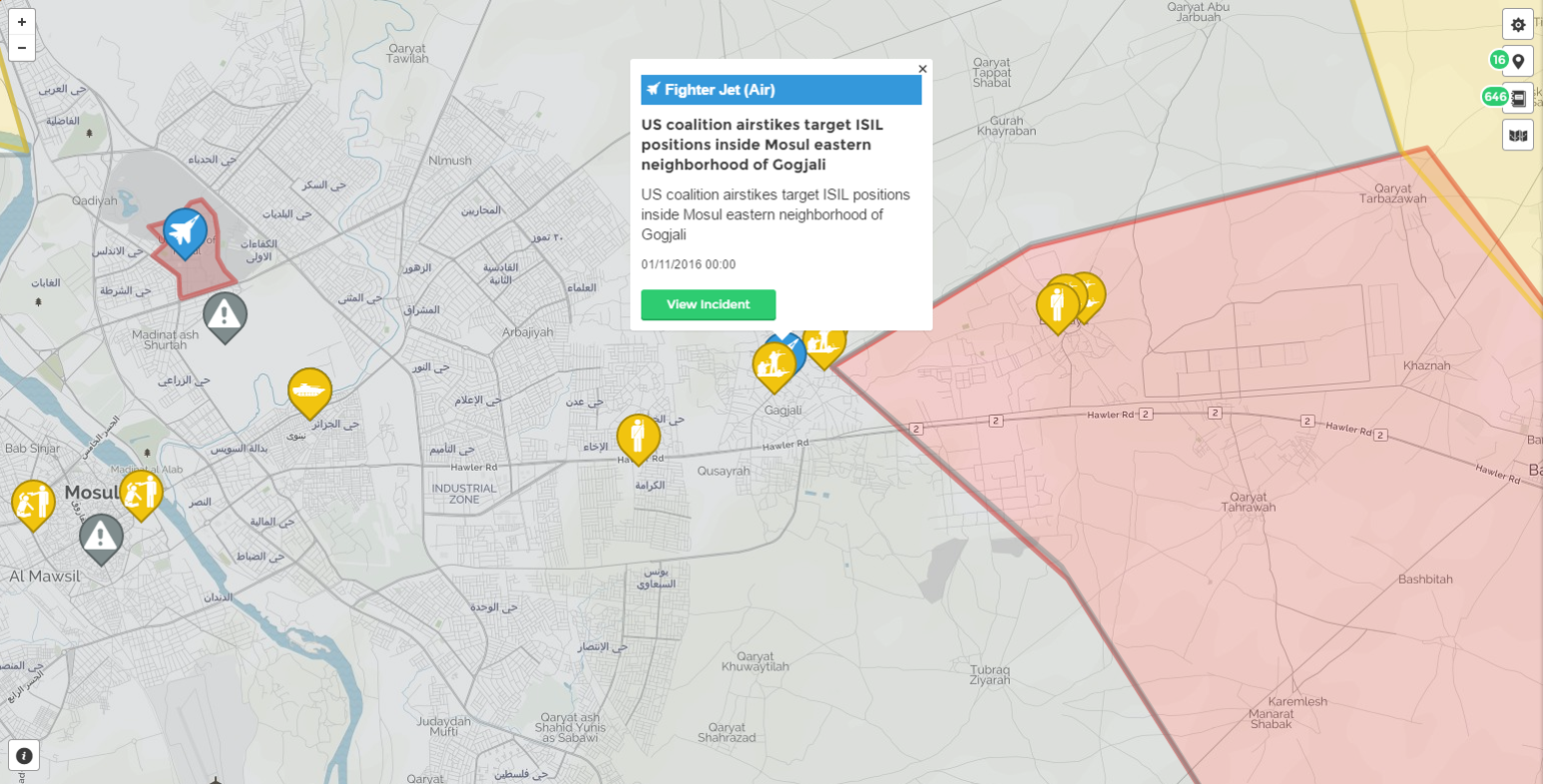 There are several other members of the coalition supporting the Iraqi Army: the British have c.350 soldiers and advisors supporting the Iraqi Army and Kurdish Peshmerga in a logistical capacity in Erbil, east of Mosul. It is also providing Tornado jets. Sweden, Norway, Spain, Italy, Germany, and the Netherlands are also contributing aircraft and/or advisors to the Iraqi Army and Kurdish forces. The French are launching airstrikes from their Charles de Gaulle aircraft carrier, currently in the eastern Mediterranean.
Kurdish Peshmerga
4,000 Kurdish soldiers are approaching Mosul from the east, intending to link up with the Iraqi army and encircle the city. They are being supported by Turkey. The Kurds are working closely with other Sunni militias.
Turkey
Turkey is currently occupying territory deep in Iraq and is ignoring demands from Baghdad to leave. Kurdish fighters took the town of Bashiqa from ISIS on 23 October 2016. At their request, Turkish tanks, artillery and âhundreds of troopsâ are now stationed there, supporting and training Peshmerga combatants. The Turks, Kurds and other Sunni groups have raised concerns about the safety of Sunni citizens of Mosul if the city is captured by Shia forces, be they Iraqi Army or informal militias. 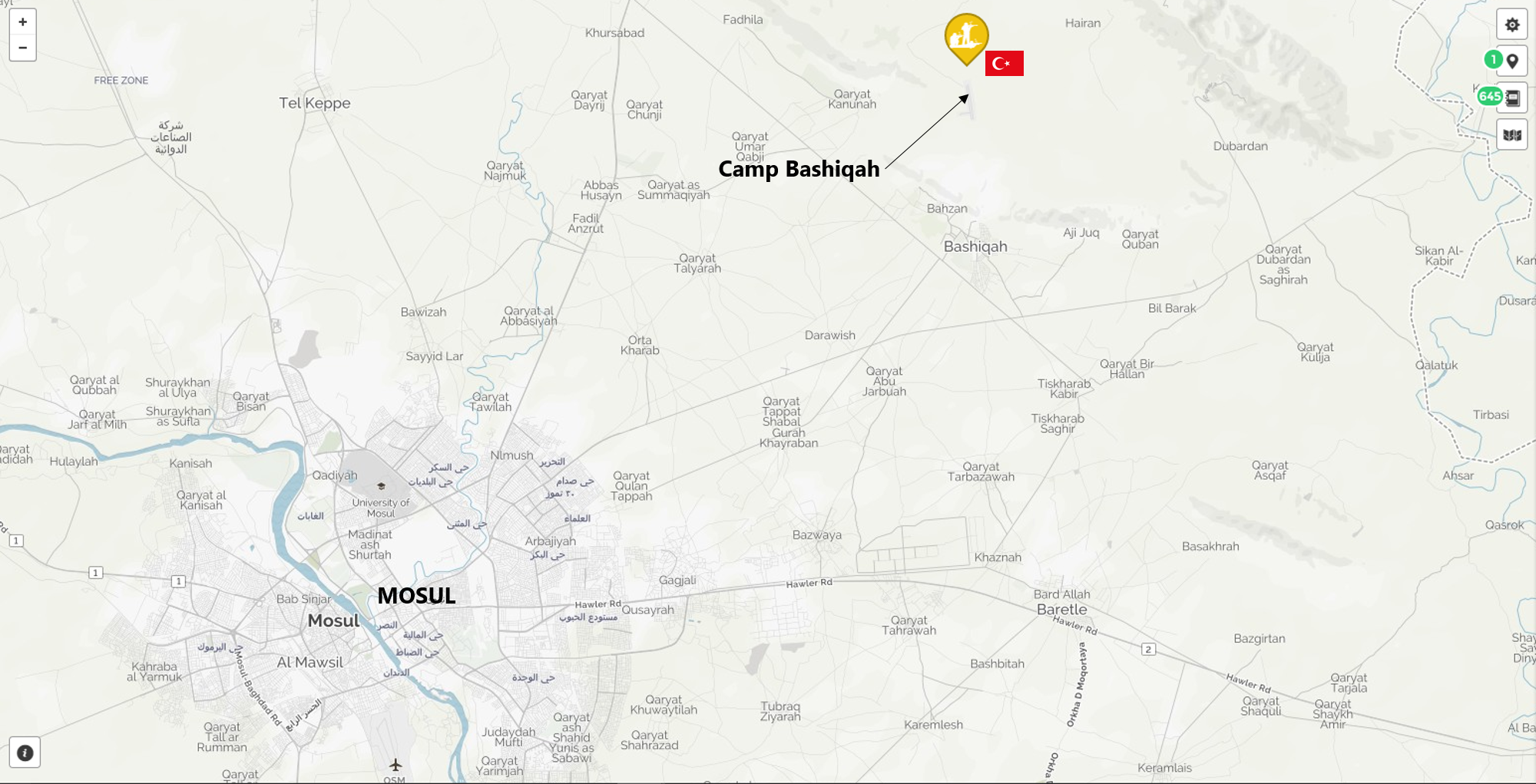 Shia militias
Shia militias have been recruited to join the encirclement of Mosul, including those working with the Iranian military. In order to minimise contact between these militias and Sunni civilians, they are not expected to take part on the attack on Mosul itself, but instead will attempt to stop ISIS fighters escaping westwards into Syria.
ISIS
Mosul represents ISISâs last foothold in Iraq. It is highly likely this foothold will be lost. The estimated 6,000 ISIS fighters still in the city have clearly not given up. Instead they have been attempting to push back encircling forces with effective counter attacks, and using IEDs, car bombs and snipers to delay the impending attack on the city. With the capture of Tal Afar, withdrawal to Raqqa in Syria has been made almost impossible. Furthermore, memories of the bloody and futile retreat from Fallujah, harried by American airpower, will be fresh in the minds of many.
Fighting to the death or attempting to blend in with the refugee exodus are the two remaining options. The first option is risky: security forces will be anticipating this, and there is little reason for civilians not to identify fighters to the authorities. The second option might be considered more appealing. The loss of Dabiq to Syrian rebels has not triggered the end of the world, contrary to ISIS propaganda. The Caliphate is shrinking daily and the very idea of ISIS is threatened. Therefore fighting to the last man would be good PR for ISIS, steeling fighters elsewhere, for example in Raqqa, to do the same. When Ramadi was taken, Islamic State militants retreated to Fallujah. When Fallujah was taken Islamic State militants retreated to Mosul. The Islamic State is losing locations to withdraw to and because of the significance of Mosul to the group, it seems likely that this will be a location that they will attempt to fight to the last man. The other options being, withdraw to Syria or perhaps head to Europe and target the Coalition countries on their own soil.
Mosul is too large for 6,000 men to defend. It is likely they will fall back to a few defensible positions and force the Iraqi Army to dig them out. Two likely positions are the government centre in west Mosul and the old town. The old townâs narrow streets will reduce the impact of coalition airstrikes, and the civilian population might even prevent any from being launched.
After Mosul
Mosul will almost certainly fall to the Iraqi Army. What happens afterwards is far less certain. Without the unifying enemy of ISIS, the Iraqi government will find itself with several armed groups on the doorstep of its traumatised second city. Sunni and Shia militias will be vying for influence. Kurds will be wondering what their reward will be for their role in ousting ISIS. There will still be an uninvited Turkish battalion in Bashiqa and Iranian officers on Iraqi soil. There will still be the running sore of the civil war in neighbouring Syria to manage. The recapture of Mosul will be worth celebrating, but it will also invite in a host of new problems for the government of Iraq and the international community.