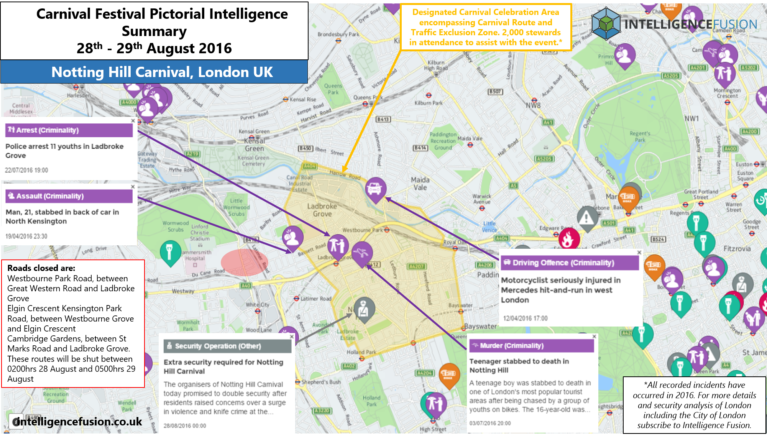 The London Notting Hill Carnival celebrates its 50th anniversary this weekend. As Europeâs biggest street party, itâs a celebration of Caribbean culture, with a mix of Calypso music, dancers, steel bands and Sound Systems. The Carnival is held for a two day period between 1000hrs â 2030hrs daily and can attract around a million visitors. The event in recent years has been marked by acts of violence with over 400 arrests and 21 assaults, including stabbings, on police officers in 2015. Narcotics and counterfeit selling are also prevalent with more than 3,500 canisters of nitrous oxide and Â£30,000 of illegal alcohol seized by police last year. Police have launched a series of pre-emptive raids and arrests across London in a security clampdown ahead of this years event. The Police stated that in addition to 1,000 uniformed officers in attendance this weekend, there will be an additional 4,000 officers on stand-by. Provincial police forces have been drafted in to support the Metropolitan Police. Black Lives Matter UK confirmed that it will be at the event but not holding a rally, only handing out leaflets. There is the risk, as was seen in the Hyde Park water fight incident in July, that criminals use the Black Lives Matter cause as an excuse to commit criminality and risk escalating violence to widespread disturbance.
Back to Reports & Resources