Attack on the Dusit Hotel Complex in Riverside, Nairobi: What Happened?

The attack on the Dusit Hotel comes at a time when Al Shabaab has sustained heavy losses in recent months and are losing control of territory in strategic areas of Somalia to the SNA and AMISOM. U.S. airstrikes in Somalia have also intensified since President Donald Trump took office.

Furthermore, the multi-agency Operation Linda Boni which began in 2015 has recorded some major successes and has impacted on Al Shabaab’s ability to use the Boni forest as a safe haven, though operational challenges remain and Al Shabaab still retain the ability to set up camps in the forest and cross the porous border. Attacks regularly occur along the Kenya-Somalia border, though there has been a drop in attacks in some areas in eastern Kenya such as the Lamu-Garsen road. Kenyan counter-terrorism, intelligence gathering and emergency response measures have also improved since the Westgate attack in 2013. 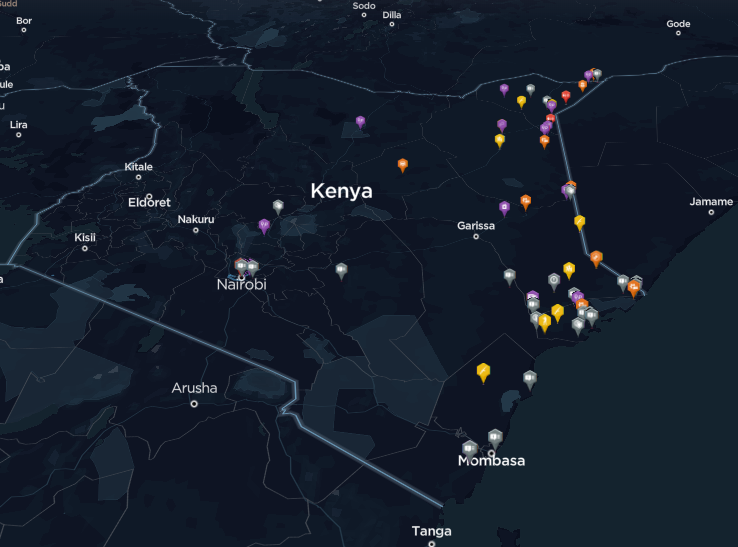 Security operations, arrests, attacks and threats linked to Al Shabaab between 2018 and 2019.

In a statement, Al Shabaab claimed the attack at the Dusit complex takes place as the country commemorates the El Adde attack.

Western officials claim to have warned Kenyan authorities several times in recent months of planned attacks by Al Shabaab. They expressed frustration with their Kenyan counterparts at the lack of response to the warnings. Conversely, Kenyan authorities claim information passed on to them was vague, that the country has been on high alert since November 2018 and that the group confused security officials by changing target locations.

Security at the Complex

Popular shopping centres and complexes such as Two Rivers, West Gate and Village Market have security measures in the form of rising arm barriers, armed guards, sniffer dogs, under vehicle inspection mirrors and body scanners. It is unclear if armed guards were present at the location of the attack. Pictures circulating social media suggest under vehicle inspection mirrors were being used and rising arm barriers were in place. It has been reported that in the morning of the attack, security guards failed to subject those accessing buildings in the area to a rigorous scanning procedure which include walking through a metal detector.

Chronology of the Attack:

Inspector General Joseph Boinnet said the attack began at approximately 1500hrs. Five gunmen arrived at the Dusit complex in a silver 5-seater vehicle and another vehicle that advanced further inside the complex. The gunmen then throw an explosive device at security guards, and at vehicles, setting three of them alight. The attack begins at the I&M Bank.

At least four attackers are seen walking inside the compound of the complex. A news reporter reported seeing six gunmen. However, the government has not said how many attackers were involved. At 1530hrs witnesses say they heard an explosion at the Secret Garden Restaurant. However, in a televised statement, Inspector General of National Police Service Joseph Boinnet said a suicide bomber detonated explosives at the foyer of the hotel. At least five people are killed inside the restaurant. One witness said he heard several explosions and gunfire from multiple directions.

GSU units (including the Recce Squad), APS (including reservists), Anti Terrorism Police Unit (ATPU), the Bomb and Hazardous Disposal Unit and the Police Flying Squad arrive at the scene along with the Kenyan Red Cross, John’s Ambulance and armed civilians. Vehicles with diplomatic licence plates (U.S. and China) are seen arriving at the scene (the U.S. marines aided the security operation). The operation is coordinated under a single command led by the GSU Commandant Douglas Kirocho Kanja. The Bomb and Hazardous Disposal Unit carry out a controlled detonation on a car used by the attackers to arrive at the complex.

Evacuation of the complex begins and those residing in nearby areas are ordered to evacuate the premises. More than 700 civilians, including injured persons, are evacuated from the complex during the course of the entire operation, according to the Kenyan Red Cross. Emergency services such as the Kenyan Red Cross and St John’s Ambulance and armed civilians assist with evacuation. Heavy traffic around Nairobi hinders the transportation of victims to hospitals.

The GSU Recce squad advance into the hotel. Four police and military helicopters are seen flying over the area. News reports later claim that one suspect was arrested.

Interior CS Fred Matiangi says security officers are in the final stages of the combing operation and that all affected buildings are secured.

Reporters state that at least 50 people have been rescued and escorted out of the building. A police source said they rescued 173 people.

One person is rescued from the building. Reports claim that two attackers have been killed.

President Uhuru Kenyatta confirms all attackers have been killed and the siege is over. Among the dead are 11 Kenyan citizens, an American national, a British national and two others of unknown identity. At least 174 people were rescued in the attack.

Do you require this kind of detail as soon as it happens? Intelligence Fusion provides timely, accurate and actionable threat intelligence to help you protect your people, assets and reputation across the globe.

Find out how we’ve increased the quality, volume and accuracy of intelligence for some of the biggest names in the security industry, book your free demo today.