Anarchy on the horizon: the growing risk of a Saudi collapse 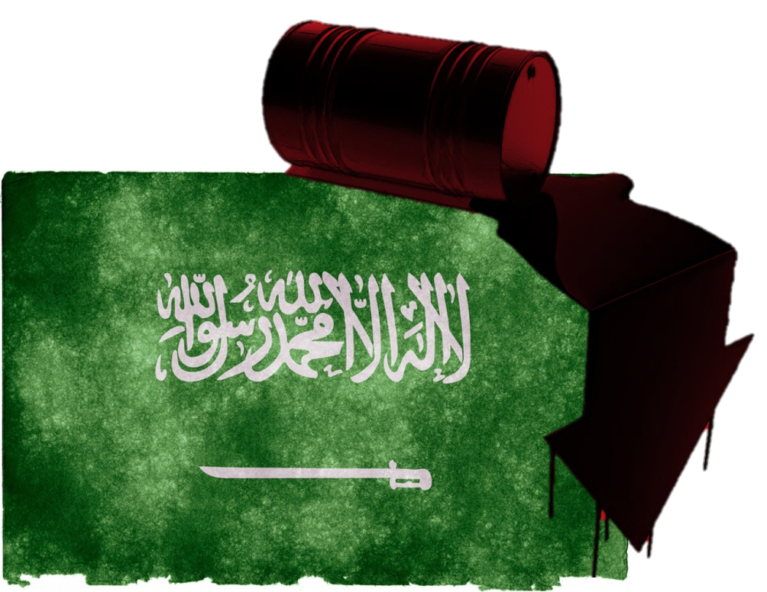 Introduction
The Kingdom of Saudi Arabia is entering a period of uncertainty as it faces a myriad of economic, regional, political, and social challenges. Caught between the demands of modernity and tradition, the Kingdom is a tribally structured society underpinned by oil and religion. Saudi Arabia faces an uncertain future due to a combination of domestic and regional factors that could initiate a collapse. To understand the current challenges, one has to return to its foundations. Situated on the Arabian Peninsula, the Saudi kingdom has been ruled by an Absolute Monarchy since 1932. Prior to that, the Arabian Peninsula was inhabited by various tribal communities whom were unified by Abdul Aziz al-Saud. His forefathers originally formed a partnership with Mohammed ibn Abd al-Wahhab, an Islamic preacher from Najd, central Saudi Arabia in the late 18th century. (al-Rasheed, 2002). The Saudi-Wahhabi alliance provided the religious legitimacy to the al-Saud military campaign in the early twentieth century and has up until now, legitimised its rule.
The discovery of oil in the late 1930s led to the rapid modernization of the kingdom. In 1944, the Arabian-American Oil Company (ARAMCO) was founded and became the basis of the relationship between the US and Saudi Arabia. The onset of the oil boom in the 1950s enabled the al Saud regime to consolidate their power and bestow financial patronage on its subjects. Saudi Arabia became a rentier state, distributing the proceeds of oil wealth upon its population in the form of housing, government jobs, utility subsidies and healthcare. Up until recently, the Kingdom operated on a belief that demand for oil would always be high, hence the impasse of reform. Recent developments, such as the Arab Spring, the war in Yemen and a collapse in oil prices suggest that the foundations of the Kingdom is under strain. Domestically, the state is facing a financial crisis, a contentious royal succession and a burgeoning youth population with high unemployment. The social contract of financial patronage in return for loyalty to the regime, is no longer sustainable. In 2016, the Kingdom implemented fiscal measures and reforms as part of the National Transformation Plan. These reforms come at a critical period for Saudi Arabia and raise doubts as to how realistically they can change an economic system and society. In this report, I will discuss three crucial factors in which I think could potentially initiate the collapse of the Saudi kingdom.
Economic & Social Challenges
The Kingdom is currently experiencing an unprecedented financial. Oil exports account for 90% of Saudi Arabia`s export earnings and roughly 45% of GDP. Since 2014, the Kingdomâs finances have been crippled by low oil prices that show little sign of stabilising. In November 2016, the Saudis were forced to cut a deal with OPEC, cutting production to under 10,000BPD. Since 2014, its cash reserves have declined from 732 billion to 562 billion in 2016. According to the Ministry of Finance Budget Report, its debt rose from 142 billion Riyals in 2015 to 316 in 2016. Saudi Arabia has one of the largest budget shortfalls among the world`s 20 biggest economies. Vision 2030 was introduced in April 2016 by deputy Crown Prince Mohammed bin Salmon, in an attempt to diversify the economy away from petroleum. Prince Salmon`s vision focuses on several reforms such as private sector-led growth to 60% of GDP, development of the manufacturing industry, foreign investment and the creation of the world`s largest sovereign wealth fund.
The Kingdom`s over-reliance on the oil sector present serious challenges to these reforms as the structural realities of the Saudi state will need to be altered. The state employs two-thirds of Saudi workers whilst expatriates account for 80% of the private sector workforce. Nearly half of Saudis are younger than 25, and this bulge could almost double the size of the labour market by 2030, according to a study by the McKinsey Global Institutes. To absorb new job seekers, the kingdom would have to create almost three times as many opportunities for citizens as it did during the oil boom years of 2003-2013, the McKinsey study found. As it stands, Saudi graduates and job seekers are unqualified in the technical and vocational sectors resulting in high unemployment amongst Saudis under 30. Tough measures have been introduced, such as cuts to capital expenditure, government salaries, bonuses and utility subsidies. In January 2017, the IMF slashed its growth outlook to 0.4% due to low oil prices and fiscal measures. The Saudi leadership undoubtedly recognises the scale of its financial crises, but can it realistically transform an economic system that has existed since is foundation?
The War in Yemen
In April 2015, Saudi Arabia launched a military offensive known as Operation Decisive Storm in response to the Houthi takeover of the Yemeni capital of Sana`a. The Saudi leadership viewed the Houthis as an Iranian proxy and began conducting airstrikes on rebel positions. Initially, the intervention was intended to install the internationally recognised President Abd Rabbuh Mansour al Hadi and drive the Houthis out of Sana`a. Two years on and billions of dollars later, the rebels still control the capital, thousands have been killed and according to UN statistics, 12 million are on the brink of famine.
Military action in Yemen marked a significant departure from the Kingdom`s previous policy of financing non-state actors in the region. The intervention has served to weaken the security of the Arabian Peninsula and the commercial shipping lanes of the Gulf of Aden. Houthi rebels have staged missile attacks on US, Saudi and UAE vessels in the Bab-al Mandeb Strait. In the last 6 months, the rebels have repeatedly targeted the Kingdom`s border regions of Asir, Najran and Jizan in a serious of missile attacks and infiltrations. 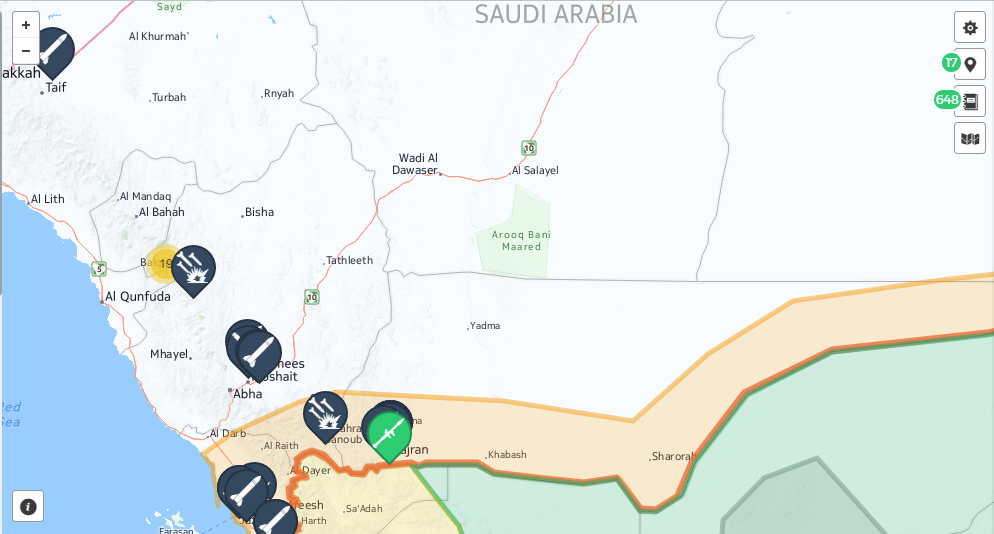 Recent attacks on Saudi border regions
The conflict has enabled al Qaeda in the Arabian Peninsula(AQAP) to expand its operations throughout southern governates of Yemen. AQAP and Islamic State have filled a vacuum were chaos, lack of governance and local anti-Houthi sentiment pervades amongst the Sunni population. In August 2016, Hamza bin Laden (Son of Osama) released an undated audio message urging Saudis to join AQAP and âgain the necessary experience to wage jihad on the House of Saudâ. The Kingdom`s military intervention is a failure and could potentially destabilise the country in the long-term. If the conflict continues, AQAP may entrench itself further creating a base for terrorist attacks on the Kingdom and the surrounding region.
Royal Succession
The question of royal succession has come at a perilous period for the Kingdom, where effective reform and stability is needed. Power will pass on to the next generation of princes for the first time in its modern history. The founder of Arabia, ibn Saud, is said to have fathered 44 sons with an estimated 22 wives (House, 2012). Hassa bint Ahmed al-Sudairi, considered his most influential spouse, produced seven sons including King Salmon (ibid). This branch of the al Saud family are known as âthe Sudairi sevenâ and are considered the most powerful branch in a clan that is said to number in the thousands.
After Abdullah`s death in 2015, Salmon`s succession to the throne sparked rumours of a power-struggle within the House of Saud. In April 2015, King Salmon demoted his half-brother Crown Prince Muqrin as his successor and replaced him with his nephew Prince Mohammed bin Nayef and his son Prince Mohammed bin Salmon as deputy crown prince. In the context of Saudi tradition, this violated the norms of succession as the wishes of the late King Abdullah were discarded and surviving sons of ibn Saud were overlooked. The elevation of Prince Mohammed to deputy crown prince reportedly caused a feud within the House of Saud. Prince Mohammed was appointed as Minister of Defence, head of ARAMCO and Chairperson of Economic Development, a lot of power concentrated in young hands. 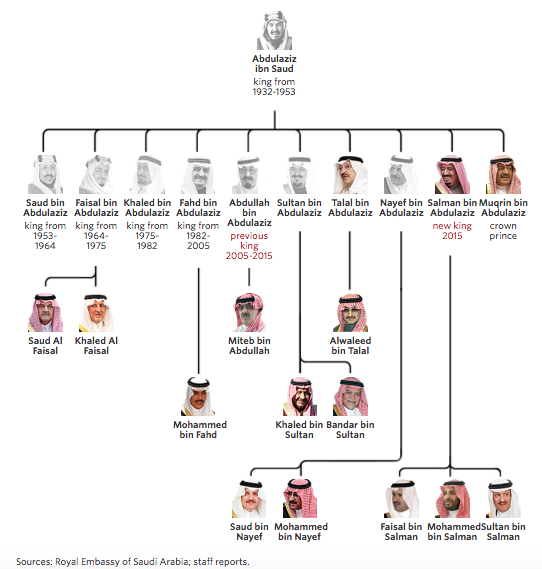 In two letters to the Guardian, an unidentified senior prince, claimed that King Salmon was ânot in a stable conditionâ and called for the King to be removed as Mohammed bin Salmon is âruling the countryâ. The letter called for the remaining sons of ibn Saud, to unite and remove the leadership in a palace coup. The prince claimed to have widespread support from within the royal family. A leaked report from the German Intelligence Agency BND, accused the crown prince of having âan impulsive policy of interventionâ through proxy wars in Yemen and Syria as opposed to the more diplomatic stance of leading members of the ruling family. In the 19th Century, the second Saudi state collapsed due to infighting amongst the al-Saud clan. King Salmon is now in his eighties, the issue of the next royal succession is not far off in the future. The House of Saud is the bedrock of the Kingdom`s political structure that traditionally values consensus and power-sharing amongst its branches. A potential power-struggle could destabilise the Kingdom leading to a collapse.
Conclusion
Considering the structural realities of the Saudi state, it is difficult to envisage how the current reforms can change a system of patronage to a sustainable model of productivity. The Kingdom will have to contain the frustrations of its burgeoning youth, who are used to wealth being bestowed on them with limited employment prospects, otherwise another âArab Springâ may occur. The Kingdom`s intervention in Yemen has enabled the expansion of AQAP and Islamic State which undoubtedly pose a threat to its national security.
The question of succession poses a risk to the Kingdom`s stability as the reins of power will pass on to the next generation. Given the reported rift in the al Saud clan and the alleged anxiety over the leadership of King Salmon, the next royal succession could determine the fate of the 85-year-old Kingdom. Saudi Arabia is undertaking an urgent transformation of its socio-economic system in a region besieged by state failure and instability. Only time will tell if the Kingdom can successfully reform the social contract and achieve the objectives set by the National Transformation Plan. Otherwise, the alternative would lead to a cataclysmic chain of events that would make the current crisis pale in comparison.
Back to Reports & Resources