Executive summary
AQAP has thrived in the instability created by the recent conflict in Yemen, taking advantage of a security vacuum and increasing sectarian divides to gain territory and support. Active in eleven governorates across Yemen, the group is particularly entrenched in Al- Bayda, Abyan and Sahbwa.
AQAP have made territorial gains throughout the south and east of Yemen but they have also suffered a number of setbacks, primarily due to a targeted campaign of drone strikes by the US. AQAP has achieved success through pragmatically forging alliances with Sunni tribes and embedding itself into local smuggling structures. As Dr. Elisabeth Kendall, who has tracked AQAP activity for many years, notes âIt [AQAP] focuses heavily on addressing local concerns and building local alliances.â Though a declared enemy of AQAP, the Houthis have helped the group grow by launching incursions into Sunni tribal territory throughout Southern Yemen- allowing AQAP to link up with local militias. Islamic State (IS) also have a presence in Yemen since 2015, though they are not as strong as AQAP. The bombing campaign launched by Saudi Arabia and its allies is also a major contributor to AQAPâs expansion in Yemen. 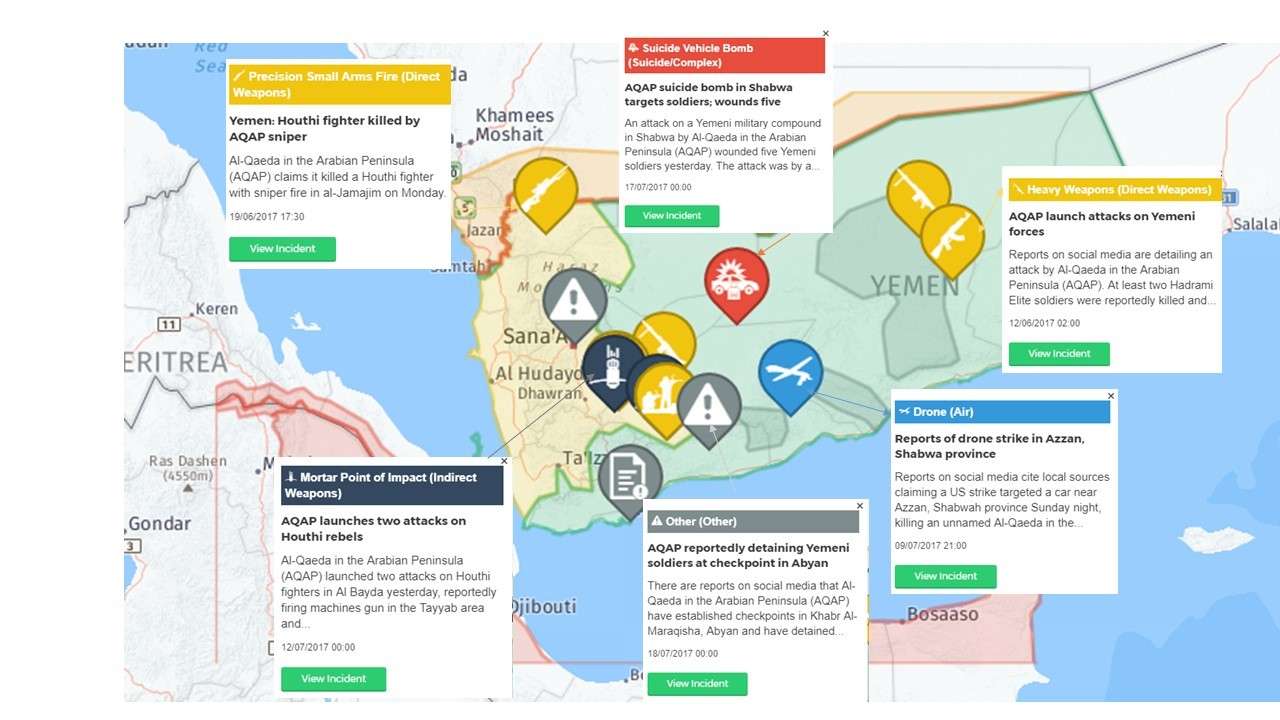 Significant incidents involving AQAP, June-July 2017 (Click on above image to expand)
Background: Al Qaeda in Yemen
AQ has been active in Yemen since the 1990s- beginning life as a splinter group of the Islamic Jihad Movement which then transformed into the Aden-Abyan Islamic Army (AAIA) and pledged allegiance to Osama bin Laden. Yemen is bin Ladenâs ancestral home. The Yemeni branch of AQ gained global notoriety in 2000 following a deadly attack on the USS Cole off the coast of Yemen which killed 19 US marines- although that attack had actually been masterminded by the Saudi branch of AQ. Post 9/11, under US pressure, Yemen authorities moved against the group and it was largely routed by 2003.
The US invasion of Iraq a year later reinvigorated the group, providing fresh recruits wanting to fight a global jihad. In 2006, 23 AQ members escaped from prison in the Yemeni capital Sanaâa. Most were eventually recaptured but two significant though lesser known AQ operatives were not; Nasser Abdul Karim al-Wuhayshi, a former personal assistant to Bin Laden in Afghanistan, and Qasim al-Raym. They oversaw the groupâs resurrection and launched a number of attacks targeting Westerners; striking in cities such as Aden then retreating to areas where they were shielded by tribes who resent government interference. The group also demonstrated an ability to strike abroad- including a failed 2009 attempt to bomb a Northwest Airlines flight as it landed in Detroit and the 2012 Charlie Hebdo attack in Paris.
AQAP as we know it today is a result of a merger between this Yemeni offshoot of the group with its Saudi counterpart. US officials have described AQAP as the most active AQ operational franchise beyond Afghanistan and Pakistan. Prior to 2011 however, AQAP did not pose a huge threat to Yemen itself. Its members numbered perhaps a few hundred and its targets were primarily Western; the militant Houthi group was a much more immediate threat. In 2011, as popular protests spread, AQAP created a parallel group Ansar al Sharia (AAS) to broaden its domestic appeal by creating a separation from its international brand. Though AQAP and AAS have some separate hierarchies- such as separate media wings for instance- they collaborate and have interchangeable personnel[1].
The War in Yemen: 2015- date
The current conflict is two years old and has its roots in the Arab Spring. Months of popular protests forced President Saleh to end his 33 year rule in 2011 and hand over power to his deputy President Hadi. Hadi faced a number of problems, not least a Southern separatist movement and increasing insecurity. The Houthi rebel movement- active since the 1990s- took advantage of the chaos to take control of an area around their heartland of Saâdah in northern Yemen. The Houthi rebels entered the capital Sanaâa in November 2014 and were welcomed by many ordinary Yemenis- including Sunnis. In April of 2015, the Houthis reasserted their control over Sanaâa and President Hadi fled to the southern city of Aden and later to Saudi Arabia.
Alarmed by the advance of the Houthis, who they view as a proxy actor for Iran, Saudi Arabia led a coalition of eight other Arab states in launching an aerial bombing campaign in Yemen, with the aim of restoring Hadiâs government. The UAE is also an active member of the coalition, with an on the ground presence.
Civilians have borne the brunt of the conflict. According to the UN, at least 10,000 people have been killed and over 3 million displaced. The county is on the brink of famine and according to UNICEF, 2.2 million Yemeni children are acutely malnourished. A devastating cholera outbreak has also killed at least 1,500 people to date.
AQAP Area of operations 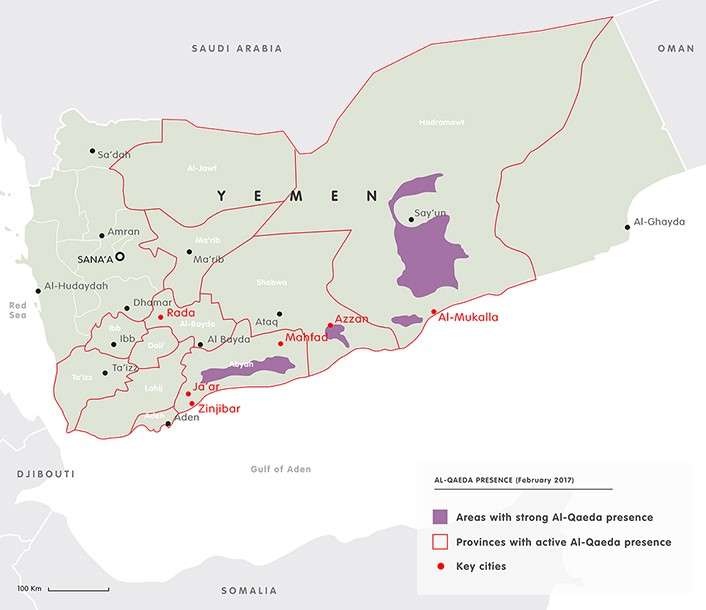 Map from EU Council on Foreign Relations (Click on above image to expand)
AQAP concentrates on the provinces of Al Bayda, Abyan and Shabwa but has an operational presence in no less than 11 governorates. It also has a significant presence in Hadramout, where it held control of provincial capital Mukalla for over a year. Though forced to withdraw from Mukalla in April 2016, the group appears increasingly entrenched in Abyan and Shabwa.
Abyan
AQAP captured a number of towns in Abyan in 2011 and governed for a year before being ousted by Yemeni troops fighting alongside local militias known as Popular Committees. Most of these Popular Committees are southern secessionists openly opposed to Hadi but they fought alongside one another, illustrating the complex and changeable nature of military alliances in Yemen. Some AQAP fighters retreated to the mountainous east but many simply reintegrated into civilian life.
The government failed to provide basic services however as AQAP had done during its brief rule, and financial promises made to the Popular Committees were subsequently broken. This vacuum allowed AQAP to regain its foothold amongst the local population. The situation became even more complicated when Houthis launched incursions into the region; AQAP was able to retake territory under the guise of âliberatingâ it from the Houthis.
Today, Emirati security forces are engaged in training local forces to combat AQAP but the group maintains a foothold in the province and remains capable of launching strikes against Emirati targets. AQAPâs position is strengthened by widespread anti-government sentiment in Abyan.
Al-Bayda
Though small, Al Bayda is a strategically important governorate, lying at the mid -point between Yemenâs historic north-south divide and sharing borders with eight other governorates. AQAP did not have a significant presence in Al-Bayda until 2010, when a conflict over succession broke out among members of the powerful Al-Thabab family. AQAP were enlisted as allies to one faction of the family in a political move which then allowed the group to gain tactical access to the governorate.
AQAP have managed to integrate into Al Bayda through political allegiances and familial ties as well as benefiting from the civilian casualties caused by US drone strikes which provoke much local anger. When Houthi fighters launched incursions into the province in 2015, AQAP fought alongside local militias. AQAP has also been keen to exploit the deepening sectarian nature of the Yemeni conflict by presenting itself as an alternative to the Houthis- or a lesser of two evils.
Hadramout
AQAP held the port city of Mukalla, with its population of approximately 500,000 for just over one year before Emirati and Yemeni forces retook the city. This was a blow to AQAPâs plans to develop an Islamic Emirate in Southern Yemen. However the group benefited financially from implementing taxes at the cityâs port- Yemenâs third largest port- and looting the central bank. It is estimated the group raise $100 million from its rule of Mukalla and AQAP continues to target Emirati and Yemeni troops in the governorate.
Shabwa
In common with many other Yemeni provinces, there is much local resentment in Shabwa towards centralised Yemeni government. This was exacerbated by the construction of the Balhaf Liquefied Natural Gas terminal along the Shabwa coastline; little to no financial benefits were felt from the project in Shabwa but rather diverted back to Sanaâa.
This resentment provided a space for AQAP to operate. However, the tribes of Shabwa are also generally resistant to outsiders, meaning any AQAP operatives in the province generally hail from there or have some tribal connection. In 2011, AQAP established an Islamic emirate in the district of Azzan in the governorate but withdrew the following year following tribal negotiations.
As was the case in Al Bayda and Abyan, once the Houthis launched an incursion, AQAPâs presence became a secondary concern. However, AQAP has maintained a lighter presence in Shabwa compared to Al Bayda or Abyan.
Conclusions
Since US President Trump took office, drone strikes in Yemen have escalated- however the current US administration does not seem interested in engaging in non-military policy options. We have consistently seen that drone strikes have the potential to weaken AQAP but not get rid of it entirely. This policy reflects a failure to grasp the reasons why AQAP is thriving in Yemen- political instability, a security vacuum, growing sectarianism and not least the deteriorating humanitarian situation. It is not a coincidence that AQAP has managed to thrive in areas that share particular traits, most notably general dissatisfaction with centralised government and poor provision of services such as education, sanitation and health. The key is not that these factors make populations vulnerable to radicalisation but rather than AQAP has moved to fill the gap in the provision of essential services and in doing so, has gained the support or sometimes tolerance, of local populations. The US and UK also need to acknowledge that their support for the Saudi- led coalition bombing campaign has helped to strengthen AQAP.
Counterterrorism efforts in Yemen should not be conceptualised solely in terms of military options. Unless the Saudi- led bombing campaign is halted, the humanitarian crisis eased and political solutions are sought, AQAP will continue to thrive in Yemen.
Sources consulted
Erlen Ofte Arntsen- Nyheter http://www.vg.no/nyheter/utenriks/krim/yemen-s-al-qaida-entered-agreement-with-tribal-leaders-not-to-attack-the-west/a/23974002/
European Council of Foreign Relations- Mapping the Yemen Crisis http://www.ecfr.eu/mena/yemen
International Crisis Group- Yemenâs Al Qaeda: Expanding the Base https://www.crisisgroup.org/middle-east-north-africa/gulf-and-arabian-peninsula/yemen/174-yemen-s-al-qaeda-expanding-base
Sanaâa Centre for Strategic Studies & Colombia Law School Human Rights Clinic- Out of the Shadows https://www.outoftheshadowsreport.com/report-authors/
Thomas Joscelyn- Long War Journal http://www.longwarjournal.org/archives/2016/04/arab-coalition-enters-aqap-stronghold-in-port-city-of-mukalla-yemen.php
UNHCO http://www.unocha.org/yemen
World Health Organisation Yemen SitReps http://www.who.int/hac/crises/yem/sitreps/en/
Yara Bayoumy, Noah Browning and Mohammed Ghobari -Reuters Investigates AQAP War Chest http://www.reuters.com/investigates/special-report/yemen-aqap/
Report written by Louise Hogan
Back to Reports & Resources