Amongst the chaos: the rise of Islamic State in Southern Yemen, its rivalry with al Qaeda and the growing threat to regional stability 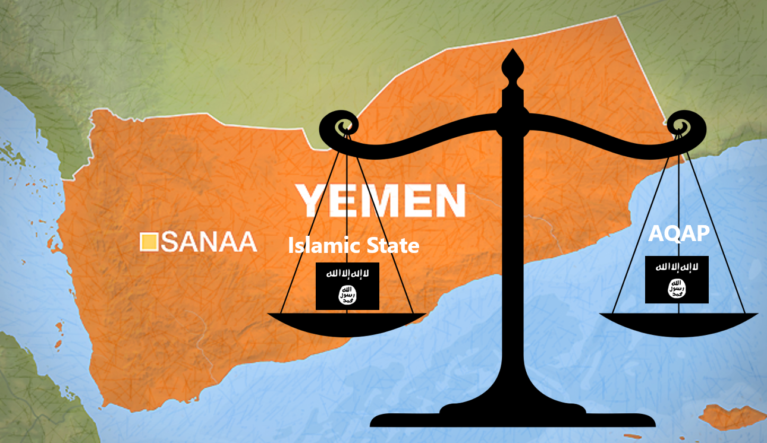 Background
In late 2014, Houthi rebels seized the Yemeni capital of Sana`a prompting a Saudi counteroffensive that currently shows no sign of resolution. The ongoing conflict has divided the Arabian Peninsula`s poorest nation into a complex set of alliances, all of which seek territorial control. Houthi forces are aligned with former president Ali Abdullah Saleh whilst current president Abd Rabbuh Mansour Hadi is supported by the Saudi-led coalition. The 20-month-old conflict has created a humanitarian crisis with an estimated 80% of the population on the brink of famine. According to a UNICEF report, an estimated 1400 children have been killed along with hundreds sustaining injuries. Yemen`s lack of effective governance and humanitarian crisis along with its basic infrastructure shattered, have created a vacuum for jihadi groups to exploit.
Emergence of Islamic State and expansion of AQAP
The onset of the Saudi-backed war against the Houthi rebels in Yemen has created a haven for jihadi organisations such as Islamic State and Al Qaeda in the Arabian Peninsula (AQAP). Since 2015, Islamic State has gained a foothold amongst the chaos, conducting attacks against Houthi rebels, government and security forces and the Shia population. From the onset, their attacks have been indiscriminate targeting mosques and civilians, framing them as part of a broader Sunni- Shia war. In March 2015, they targeted two Shiite mosques in the capital of Sanaa, killing and injuring hundreds of civilians.
Like Islamic State, AQAP also seek territorial control but their approach differs as they mainly concentrate on Houthi and government forces. AQAP has an established presence in Yemen since the early 1990`s. In 2009, both Yemeni and Saudi branches merged to create AQAP conveying its ability to organise effectively and establish itself amongst the social fabric. Since the onset of the conflict, AQAP has expanded rapidly, capitalising on local anti-Houthi sentiment amongst the Sunni population. The U.S views AQAP as a threat to its national security and has killed 28 AQAP militants in 9 targeted strikes between September and December 2016 according to US Central Command. Saudi-led forces remain firmly focused on countering the Houthi rebels leaving AQAP and Islamic State to entrench itself further.
Recent high profile attacks show that Islamic State is seeking to compete with AQAP for territory and enhance its capabilities. In the summer of 2016, Islamic State announced that they operated in 6 wiliayat (provinces), Sana`a, Aden-Abyan, Shabwah, al-Bayda, Hadramawt, Taizz and Ibb. Unlike Iraq and Syria, they do not control these provinces but they operate in organised cells. In recent months, they have staged several attacks on the city of Aden. They have targeted government and security forces in a serious of guerrilla style attacks. They have used tactics such as suicide bombing, car bombs, beheading and assassinations of government personnel.
In December 2016, Islamic State claimed responsibility for two suicide bombs which targeted government troops as they queued for their wages. Both attacks occurred within seven days of each other. AQAP released a statement following the attack on December 10, condemning it and referring to Islamic State as âdeviantâ. The statement also accused Islamic State of attempting to cause a rift between AQAP and Yemeni tribes as many of the dead soldiers were sons of tribes affiliated with the group. AQAP and Islamic State are both Salafi-jihadi organisations, but their strategies diverge when it comes to consolidating territory. AQAP cultivates its alliances with local tribes, careful not to alienate the local population while Islamic State has attempted to steer the conflict along sectarian lines by bombing Shiite mosques.[1] [2] [3]
The attacks on Aden show that they are seeking to destabilise the Hadi government and will block any effort to resolve the conflict. The current chaos provides the conditions necessary to expand. In December, Yemeni security forces disrupted cells and bomb making facilities in Aden. These incidents show that Yemen`s de-facto capital will remain a primary target for the foreseeable future.
The conflict in Yemen and regional instability
Yemen sits on the Arabian Peninsula neighbouring Saudi Arabia and Oman. If the conflict continues in its current capacity, both AQAP and Islamic State could target neighbouring Gulf states further destabilising the region. Both groups have stated their desire to bring down the House of Saud and control the Land of the Two Holy Mosques. It`s strategic location places it adjacent to the Bab al- Mandeb Strait which connects the Red Sea with the Gulf of Aden and the Arabian Sea. It is also the worldâs busiest commercial shipping lane, carrying most of the world`s oil exports connecting Asia to Europe via the Suez Canal. If AQAP or Islamic State were to gain substantial weaponry, they could potentially target commercial shipping in the region. This would destabilise oil prices and impact heavily on the world economy.
In conclusion, the current conflict in Yemen has contributed to the rise of Islamic State and the expansion of AQAP. Recent attacks show that they will continue to destabilise the country in pursuit of territory. If solid gains are made by either group, destabilisation of the Gulf states could potentially follow with major consequences for the region and beyond.
Back to Reports & Resources