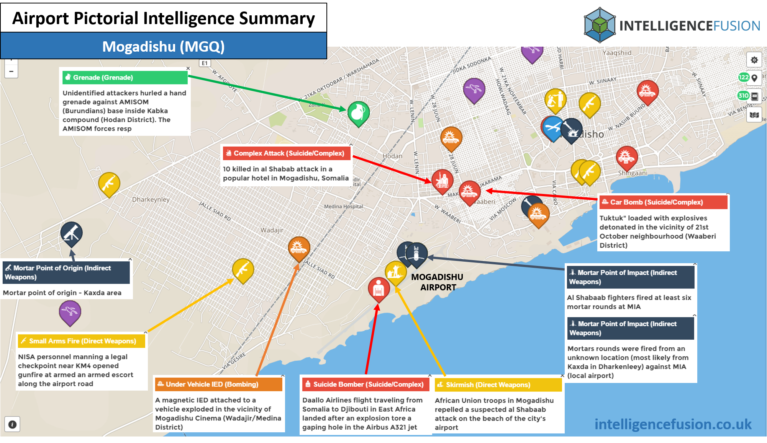 Overview: Following the ousting of President Siad Barre, civil war ensued, with various militias fighting for control of Mogadishu, later to be replaced by the Islamic Courts Union (ICU) in 2006. The ICU thereafter splintered into more radical groups like Al Shabaab which fought the Transitional Federal Government and African Union Peacekeepers. With a change in administration in late 2010, federal control of Mogadishu steadily expanded. The pace of territorial gains also greatly accelerated, as more trained government and AMISOM troops entered the city. Mogadishu is divided into 16 administrative districts, with the airport being located in the south of the city and is bordered by the Indian Ocean. The airport has witnessed significant attacks in recent months including the detonation of an IED on a Daallo Airlines flight from Mogadishu to Djibouti. The terrorist who detonated the device had been given a laptop which concealed the explosives by a man wearing a security jacket at Mogadishu Airport, which raises the issue of vetting and the insider threat. When the device was detonated it tore a hole in the fuselage and the suicide bomber was sucked out of the plane, but the pilot managed to make an emergency landing. Another incident of note was the al Shabaab attack on the beach of the cityâs airport, which was repelled by African Union troops. The airport occasionally received mortars, believed to have been fired by al Shabaab from positions to the west. There are also regular high impact attacks in the areas surrounding the airport, targeted against hotels, restaurants, security forces and civilians. The UK Foreign and Commonwealth Office advise against all travel to Somalia, including Somaliland except for the cities of Hargeisa and Berber.
Back to Reports & Resources