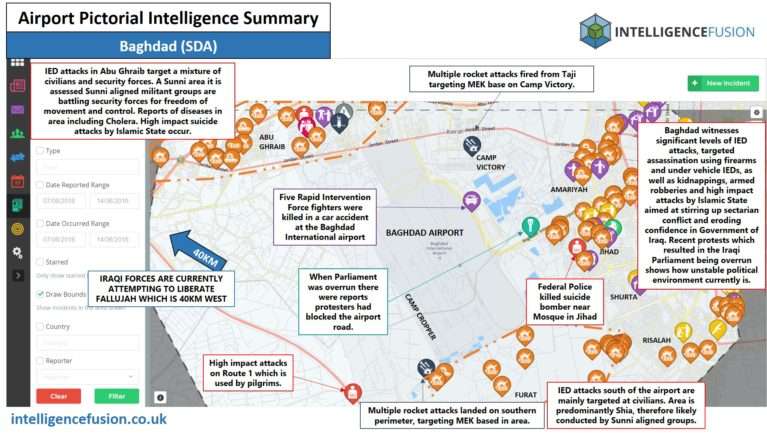 Overview: Incidents are rarely reported at Baghdad Airport, however, to the north, east and south numerous attacks occur, mainly targeted against the local population. The city continues to wrestle with sectarian conflict and the threat of Islamic State high impact attacks. The political landscape of Iraq is currently highly unstable, with the Parliament recently being overrun by supporters of Moqtada al Sadr. Of note in relation to that incident was the report that demonstrators had blocked the road from the Green Zone to the airport in order to prevent âcorruptâ politicians from fleeing the capital. Only 40km to the west of the airport, Iraqi forces are engaged in counter insurgency operations and are attempting to retake Fallujah from Islamic State control. The airport rarely received indirect fire, however, there were two incidents in late 2015 of numerous rockets being fired which were believed to have been targeting Iranian dissidents who live on Camp Victory and south of the airport. Driving incidents have been reported at the airport, which included fatalities so when driving in the area extra care should be taken. High impact attacks have been recorded on Route 1, south west of the airport targeting pilgrims and to the east and north targeting Mosques and civilians.
Back to Reports & Resources