Could Nancy Pelosi spark tensions between the US and China by becoming the first sitting speaker of the House to visit Taiwan in 25 years?

A report from the Financial Times announced on Tuesday, the 19th July that U.S. Speaker of the House Nancy Pelosi planned to visit Taiwan, sparking concerns amongst the military and predictable protests from Beijing. While few details of the proposed trip have been released, it is part of a wider regional trip to include Indonesia, Malaysia, Japan and Singapore as well as U.S. Pacific Command in Hawaii. Originally planned for April – when it also drew protests from Beijing – the trip was postponed when the Speaker contracted Covid-19.

Should the visit go ahead it will be the first visit by a sitting speaker and the highest ranking visit by a U.S. official since Newt Gingrich visited in 1997 [image source: Intelligence Fusion]

Pelosi has been a vocal supporter of Taiwan and emphasised the importance of demonstrating U.S support. Despite this, criticism has been levelled at the trip for being more political theatre than substantive support, and that it could contribute to the further decline of U.S.-China relations. Depending on the Chinese response it could also leave the Taiwanese feeling far more vulnerable than reassured. Some also believe that Pelosi could be playing to the domestic audience ahead of the midterm elections, where a hawkish approach to China seems to be the only policy that unites both sides of the aisle, and the Democrats do not want to be seen as soft on China.

After news of the visit was released President Biden cited senior Pentagon figures when he said “I think that the military thinks it’s not a good idea right now,” although he did not suggest Pelosi cancel the visit. It is unclear why the military – presumably U.S. Pacific Command – would advise against the trip, but it could be due to issues around U.S. operational readiness or increasing Chinese belligerence over Taiwan. Biden has reportedly tasked his National Security Advisor, Jake Sullivan, with explaining the dangers of the visit to the Speaker, but due to the independence of Congress from the Whitehouse Biden has no power to forbid the trip.

Should the visit go ahead it will be the first visit by a sitting speaker and the highest ranking visit by a U.S. official since Newt Gingrich visited in 1997. Should it be cancelled – assuming that it was indeed planned and not merely a rumour – the U.S. would suffer a humiliating loss of face and appear to have a Taiwan policy entirely beholden to Beijing. Indeed, it could be argued that Pelosi must visit Taiwan whether she wants to or not as otherwise the U.S. will look like it is bowing to Chinese demands. Gingrich has weighed in on the debate to this effect, saying that “[Pelosi] cannot allow the Chinese communist dictatorship to think that it can bully an American Speaker of the House. And frankly, she ought to tell the Pentagon and the State Department to shut up.”

However, Gingrich’s visit took place under very different circumstances. Visiting in the wake of the 1995/96 Taiwan Strait Crisis, where China had been very firmly put in its place by the then-unassailable U.S. military, the power relationship between the U.S. and China was extremely one-sided. Twenty-five years later and while the U.S. military remains dominant, China has significantly narrowed the military and economic gap. The People’s Liberation Army (PLA) now fields a substantial air force complete with new fifth-generation fighters, a modern navy that outnumbers that of the U.S., and an arsenal of missiles and munitions that it could hardly dream of having in the late 1990s.

At the time of writing, Presidents Biden and Xi are currently having only their fifth phone call of the Biden presidency on 28th July, during which the Pelosi visit will no doubt be featuring prominently. Explaining Biden’s constitutional powerlessness to prevent the visit to Xi is unlikely to wash in Beijing, and it is extremely uncertain that the two leaders will be able to find a diplomatic solution. One possibility is that another, lower-ranked member of the administration could go in Pelosi’s stead, allowing a face-saving compromise under which both sides could declare a win. If not there could be a diplomatic stand-off, with the U.S. unwilling to bow to China’s protests and China forced into a potentially damaging response by its own nationalist rhetoric.

When the visit was announced the Chinese Foreign Ministry spokesman Zhao Lijian responded to the rumours of the visit by saying that “If the U.S. side insists on making the visit and challenges China’s red line, it will be met with resolute countermeasures. The U.S. must bear all consequences arising thereof.” More concerning than the expected bombast from the comparatively lowly-ranked Foreign Ministry, Chinese officials have hinted at a possible military response while delivering far sterner warnings behind closed doors.

What a Chinese military response could look like is unknown. Flights of up to 39 PLA aircraft into Taiwan’s Southwestern Air Defence Identification Zone (ADIZ) have become a standard way for Beijing to signal its displeasure at developments in cross-strait relations, but this would likely not carry sufficient weight to gain Washington’s attention. Increased flights, military drills or missile launches would likewise probably come across as weak. One possibility is that Beijing could instruct the PLA to impose a no-fly zone or ADIZ over Taiwan. Although the PLA would probably not directly threaten Pelosi’s flight – almost certainly a USAF plane – regional experts do not rule out the possibility that they could attempt to force her plane away from Taiwan, possibly even to land on the mainland. Should PLA jets go as far as to cross into Taiwanese airspace and intimidate a U.S. military aircraft with a senior government figure aboard, we could well see a rapidly evolving military and political crisis in the Taiwan Strait. With the 20th Party Congress and U.S. midterms looming, where that could go and how it ends is anybody’s guess.

Prepare your organisation for disruption and international tensions – get access to the only threat intelligence platform designed by intelligence analysts. Our historical database of over 700,000 incidents – with over 16,000 incidents mapped per month – lets you see the biggest historic and emerging threats in your areas of operation. Get in touch with us now to start your free trial and demonstration of the Intelligence Fusion platform. 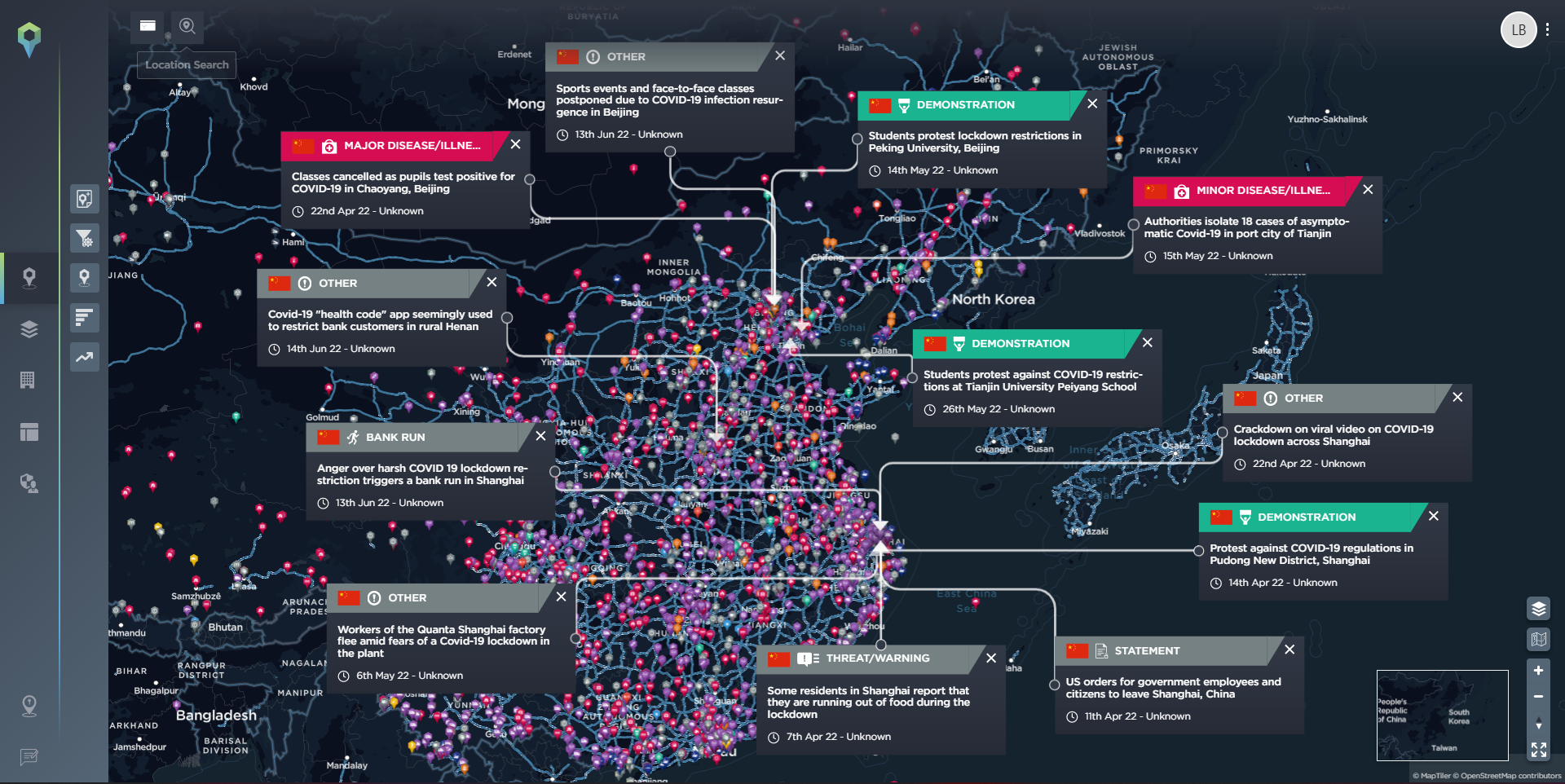 Xi Jinping and the 20th Party Congress: Chinese politics and geopolitics in 2022

Analysis of Cross-Strait Relations and the Implications for International Security